Nice post Frank, and I agree with what you said above.  In short, it's complicated, although we are always trying to get some type of limit formula it seems!  Your example of the bright cord tethered to a satellite is a good one.  If contrast is high enough it could be "detected".  I guess a related question though, is how do we know when contrast will be high enough?  Certainly, there could probably be some way to model this using MTF charts for a given scope and some knowledge of the feature in question?

It's easy to see that something much smaller than diffraction limit is visible just by imagining a glowing thread in the distance.  It may be only 0.01 arc-sec wide - but if it is against a black background and glowing then it will be easily visible even if it ends up appearing to be 5" wide in an image - due to diffraction.

Now imagine a black thread hanging in front of a white background - and you image it.  In that case you are looking for a faint dip in intensity as a stripe across the image.  Of course it won't be 0.01 arc-sec in the image and it will be blurred by diffraction - but so what?  If you have high snr to image that white background you may see a dip perhaps 5" wide as a line across the image - and you have detected it.

You can do experiments like this yourself with a small aperture telescope aimed at a distant white card - and you have an assistant randomly place a thread against the background - or not.  Can you detect it at all?  Can you tell its orientation?  That's a controlled way to do things because you have ground truth info based on what the assistant chooses to do - and it is a blind test.

Diffraction will play a role since it determines how much the line is blurred - but it doesn't directly translate to a loss of detectability.

Very good points Frank. A more relevant example, perhaps, would be my shot of Jupiter on the 23rd of the novel plume in the NTrZ. The seeing was exquisite for the period that it rotated out of the terminator: the image required light deconvolution with a radius of 1 pixel and no wavelets. And there was the plume, bulging off the surface of Jupiter like the peaks of Central Australia in the morning outback sun: 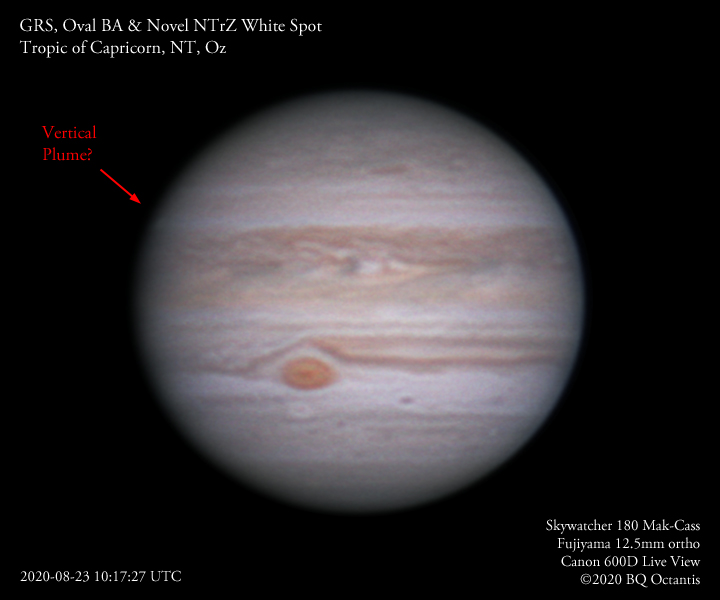 It persisted across several frames, too, in multiple orientations:

So I believe, with some reasonable level of certainty, that I detected a vertical component in the Jovian atmosphere with my 7-in aperture in exquisite seeing. Do I believe the height the relief in the image implies? Well no, it's well below the resolution limit of a 7-in aperture. It is not resolved by any standard definition. But do I believe that a set of bright, high clouds in the morning sun contrasted against the dark side of the planet could fire up several intact diffraction rings (not destroyed by poor seeing) over the darkness? Per your bright string construct, absolutely.

Empirically, I think we can derive a set of detection limits through experimentation. I'm still curious as to the physics…

I was pondering the string model again this morning, and I realized that it was an interesting but not entirely adequate model for the Encke Gap. The Encke Gap isn't a black string at all—it is where two semi-infinite bright planes meet with a small gap between them. This is an important distinction because at a basic level, we're not talking about a long string of Airy disks, but a semi-infinite plane of Airy disks. The edge of a semi-infinite plane won't be a bright line of Airy disks with a sharp set of diffraction rings, but instead a smearing of partial disks nearing the edge, all convolved with their mutual ringing patterns. So in our perfect experiment on just one semi-infinite plane, its edge with an abrupt terminus would not have a sharp edge, but a diffraction smearing across the pixels spanning the edge. And of course, the Gibbs effect would frustrate any attempts at sharpening, given how discrete subito pianissimo transitions are disliked by signal processing.

To test such a hypothesis on the Gap itself, we would need a telescope high above the atmosphere to preserve the Airy pattern and to eliminate the potential artifacts from the sharpening required to try to reconstruct it. The Hubble happens to be such a telescope. And the fact that its diameter is almost—but not quite—large enough to "resolve" the Gap (per the half-angle Rayleigh criterion) ends up making the Gap a useful case study after all.

Saturn's parameters at that instant were

The Hubble parameters are

For pixel dimensions, I just used the green channel. The width across the rings was 1055 pixels, which gave a pixel dimension of 24.62 pixels/". This put 1.384 pixels across the Airy disk half-angle—the Rayleigh criterion for resolution. At this pixel pitch, the Encke Gap should be 1.221 pixels—11.8% below the resolution limit.

The actual Gap in the image told a different story. The brightness of the edges of the two semi-infinite planes starts to fall off well before the actual edges of both. I plotted the intensity (i.e., the green level from 0 to 255) across the gap, centered on the dimmest pixel. I did this for both, and for symmetry I plotted them radially from the center of the planet. For a ground truth comparison of quantization levels, I went to the Cassini mosaic of the rings, which is resolved well below the width of the Gap. 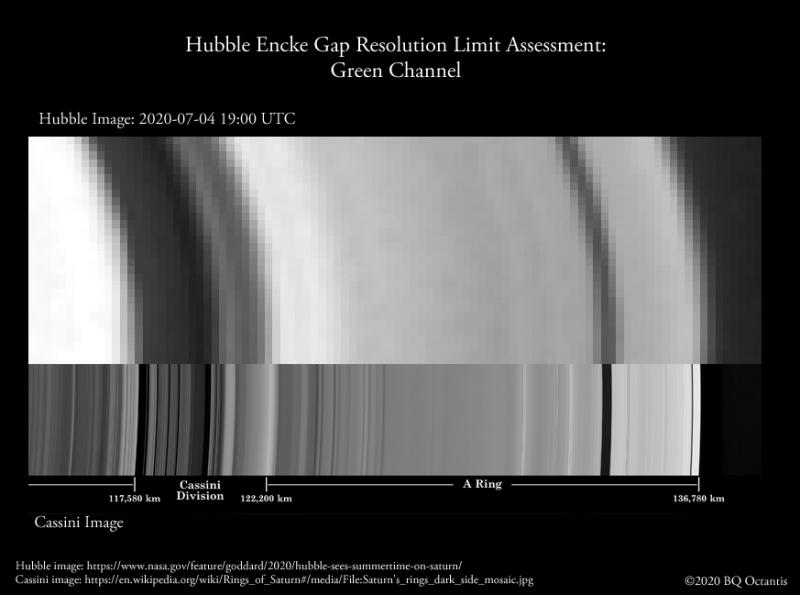 The intensity level (0-255) across the gap matched to first order. But the shape of the subito pianissimo Gap was much less sharp and much wider in the Hubble image. The Gap in the Cassini image notably does not fall to 0 levels (apparently it's not an empty gap); the Hubble Gap does even less so. I assume this is because the Gap in the Hubble image is still filled with first-order falloff of Airy disks at the edges of the semi-infinite planes. 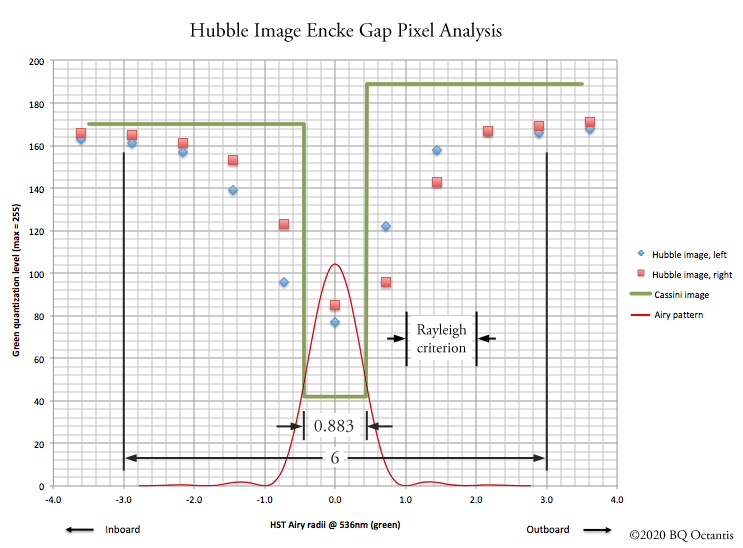 So the effect of the Airy disk is to smear the sharp edge of a semi-infinite plane—not just into the adjacent darkness, but also the darkness into the bright plane. You can see this at another semi-infinite plane in the image: the outer edge of the rings also shows a smearing vice a gradual falloff. For the convolved Gap, the dark lane appears to be smeared around 2 radii from the edge. So for our experimental scope above the atmosphere, instead of a bright Gibbs ring from sharpening, we have a filed down edge that widens the high-contrast feature.

G'day BQ. I think that you will find this website relevant to "the conjunction of diffraction images of two bright edges". See Figure. 14. There is a lot more on this website as well. https://www.telescop..._resolution.htm

G'day BQ. I think that you will find this website relevant to "the conjunction of diffraction images of two bright edges". See Figure. 14. There is a lot more on this website as well. https://www.telescop..._resolution.htm

Thanks John—it's been a while since I've been on that site! Incidentally, used it heavily for eyepiece selection—Figure 213 shows the extremely tight performance of the Abbe design over all others (hence my selection). And here it's still an excellent reference—Figure 14 is exactly what we need! From the description:

"Limit to diffraction resolution vary significantly with the object/detail form. Image of a dark line on bright background is a conjunction of diffraction images of the two bright edges, described by Edge Spread Function (ESF). As the illustration shows, the gap between two intensity profiles at λ/D separation is much larger for the ESF than PSF (which is nearly identical to the Line Spread Function, determining the limiting MTF resolution). It implicates limiting resolution considerably better than λ/D, which agrees with practical observations (Cassini division, Moon rilles, etc.). Gradual intensity falloff at the top of the intensity curve around the edges can produce very subtle low-contrast features, even if the separation itself remains invisible."

Ultimately you are effectively looking at a graph of points with error bars and asking if you can see a dip somewhere in the curve - or if it is just a noise artifact.  The smaller the error bars and the bigger the dip - the more confidence you can have.  Diffraction dictates the minimum width of the dip - but whether or not you can see it is set by SNR and contrast with the background.

This is analogous to asking if you are seeing a true exoplanet dip in a light curve or not.  If you know what the duration and shape of the curve is you can compare it to your own light curve and assess if it was truly detected or not - but it will be assessed based on the error bars and statistical likelihood that it is just noise.

As for a bump or feature on the limb - it is very similar.  Diffraction doesn't set an absolute limit because even a very small bump can show since it is always present even if diffraction is blurring it.  It just gets harder to see - but there is no fundamental limit.  But in all these cases once you start processing and sharpening to bring out a feature you are trying to see better - you may bias the result and create a very real looking, but false artifact.

I'm very familiar with the problem of trying to discern noise from detection. That's why I animate. And instead of using my eye-brain system on the eyepiece, I use it on the animation.

Incidentally, I animated last night's capture in good seeing. And I could detect Io as it marched across the face of Jupiter. But ironically, it's not the disk that gets resolved—I could only resolve about two pixels on it anyway. Instead, it's the darkening at its poles referenced by Kokatha Man that provides sufficient contrast against Jupiter to smear it into detection: