It was not a bad night for a trip to the summit although the seeing index wasn’t promising anything spectacular. As it turned out, it was a “better than average” night for observing with low humidity, light wind and 52° F temperatures. With a C925/CGEM on a pier I was going for a better observation of a few systems on the AstroLeague Multiple Star Observing Project List. Of the four of us at the Haleakala Amateur Astronomers site that night, three were imaging. I set up my C925 and got it polar aligned right away to render sketches. I’m attaching the sketches from My Gallery. 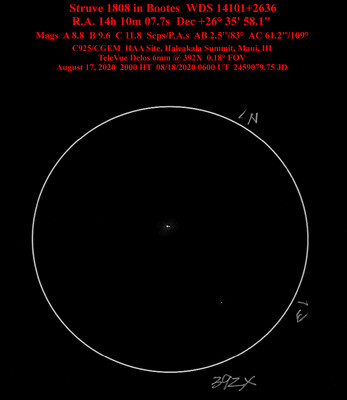 Next was BU 31 also in Bootes, a quadruple with a tight orbital and increasing AB pair. Stelle Doppie has the Lit. here. The AC pair are also physical but not considered orbital. The D component is quite a ways out to the west making it a little tough to get along with the tight ABC trio. I used a Televue Delos 6mm at 392X for the Low Power Ocular and a TMB 4mm at 587X to get a closer view of the system. Happily I was able to split the trio and still get the D component with the TMB. 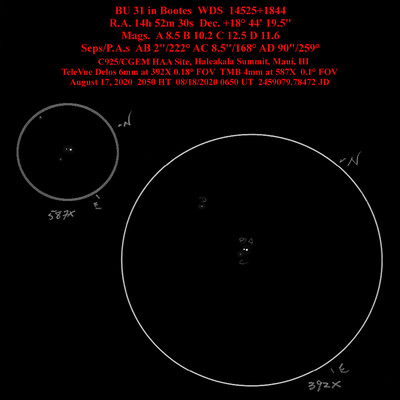 On to STT 9 in Cassiopeia. This is a five star system and Stelle Doppie has the Lit. here. I wasn’t able to get the 11th and 12th Mag., (D to the NE and E to the E), components, although I tried. The middle level air quality, above 15,000 fit and below the Jet Stream, wasn’t cooperating. I stayed with an Explore Scientific 9mm EP at 261X for this sketch. Powering up any higher wasn’t successful. There are some nice field stars in the FOV and I labeled some for kicks and giggles. 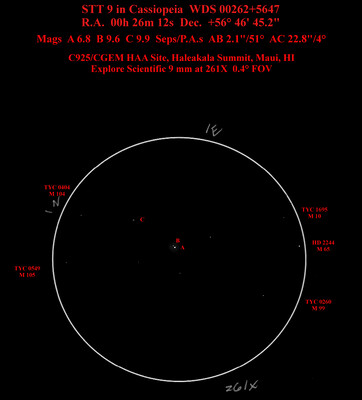 Next I moved on the Struve 1996 in Draco. My CGEM has a little sluggish in this northern quadrant of the sky and there are not too many brighter stars to sync to near this object. After a few tries, I got it and I studied it for almost an hour. Stelle Doppie has the Lit. on this near equal magnitude trio here. All three stars fit easily in a 261X FOV with an Explore Scientific 9mm EP and I powered up with my Televue Delos 6mm at 392X just to see how it looks. There’s one notable field star, SAO 29724, Mag. 8.7 to the west that may be visible in your FOV. 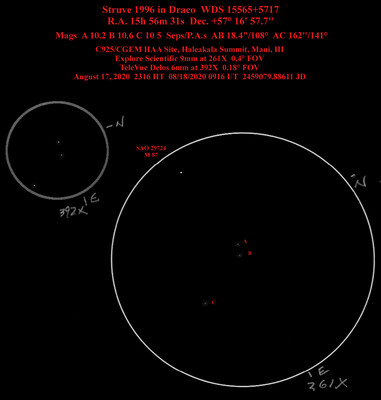 By now it was after midnight and the breeze was kicking up a bit to about 15 m/h, 7 m/s. This one, Struve 1169 in Cassiopeia has a surprise wide and orbiting AB pair! Why at 20 arc seconds!? Again, Stelle Doppie gives the answer here; the system is only 45 PC’s or 146.7 LY away! The C component is physical but not proven to be orbital. I did quite well with an Explore Scientific 18 mm EP at 130X on this wide trio with an 11th Mag. C companion, although the Lit. has it at almost three times the distance. Check it out to see what you can tell. I labeled three field stars to anchor the object in the FOV. Again, I labeled three field stars in the FOV. 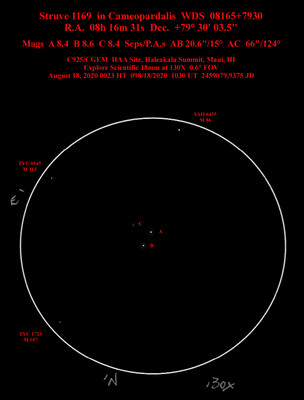 The mid-level atmosphere was getting murky and there were pronounced airy discs around stars at high powers at 0100 Hawaii Time Tuesday morning the 18th. The humidity was spiking although I persisted and went to HJ 658 in Cetus. This system has a very tight and dim BC pair that I couldn’t split, although I got a snowman as best as I could tell. Stelle Doppie has the Lit. here. The A,BC components are considered physical but not proven to be orbital. It’s another system that’s nearby at <560 LY. I utilized an Explore Scientific 9mm at 261X, 0.4 ° FOV for the sketch. I labeled three field stars to anchor the system in the FOV.  The conditions were now deteriorating and I threw in the towel. All in all, a very good night considering the WX predictions.

Thanks for reading this and any comments are welcome.

your a work horse  Steve, conditions were great for sure ...thanks for the update great work!!

Great post Steve, and thanks for the link to the AL program. I want to get started with it soon. Your sketches put the fire under me to get started!

It WAS a good night up there, wasn't it?

It WAS a good night up there, wasn't it?

Thanks, Jim. You know how good it can be when that jet stream settles down and the humidity drops. Like many places, when it's good it's good. Luckily we can observe from a high elevation.