The September 2020 Challenge is now open. The target is NGC 7129. To reduce the number of stickies, please submit your entry to this thread.

To increase participation over such a diverse group, the winner will be selected by random drawing. Please feel free to start a thread requesting guidance on your entry prior to submitting it, the whole purpose of this challenge is to learn and compare on a common target. Entries must be submitted by midnight eastern time on September 30, and I will try to announce the winner sometime on October 1.

Note: If I am late announcing, gently nudge one of the moderators in a private note, it helps.

The target chosen for this month is far north. I had not even heard of NGC 7129. But I want to see the photos of the participants so that I can get to know this object.

Alrighty then, lets get this party started.

Cool choice of target this month btw....for Hubble. 80mm, not so much.

Nice challenge this! For me it's nice and high in the sky. Had a first session last night (no clouds since 4 weeks) and indeed it's a challenge: the core is captured easily but the surroundings are more difficult. Nice object to practice on 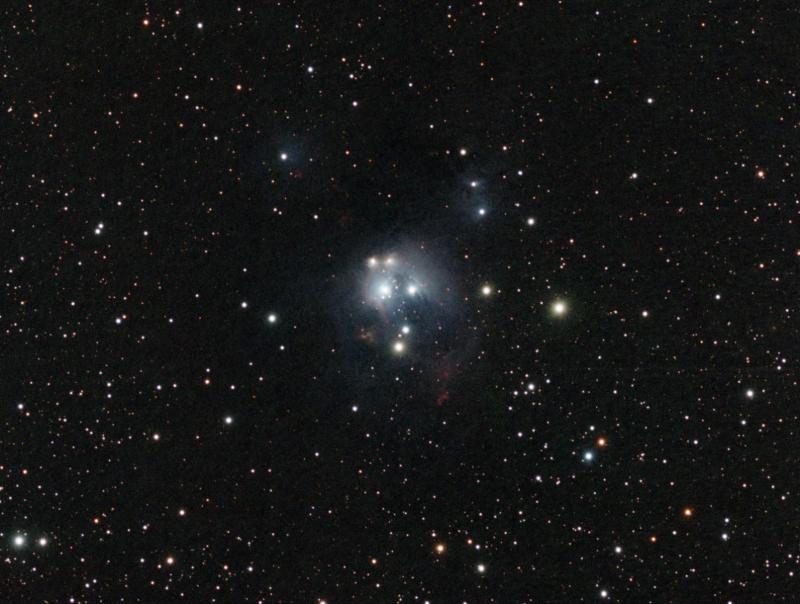 I may as well toss my initial version of this. I plan on going longer and with longer subs now that I have guiding straightened out, of course that means I need the weather to cooperate.

This was taken August 13th, 30x 120s subs, 20 flats, 20 darks, 60 bias, ISO 1600, Pentax K1ii in crop mode, Orion 10RC with ApexL flattener/reducer, unguided because it wouldn't work right that night (dew heater battery pack was dead and guidescope was covered with dew so don't zoom in on my stars), iOptron CEM60. Stacked in APP and finished up in Photoshop 2020. 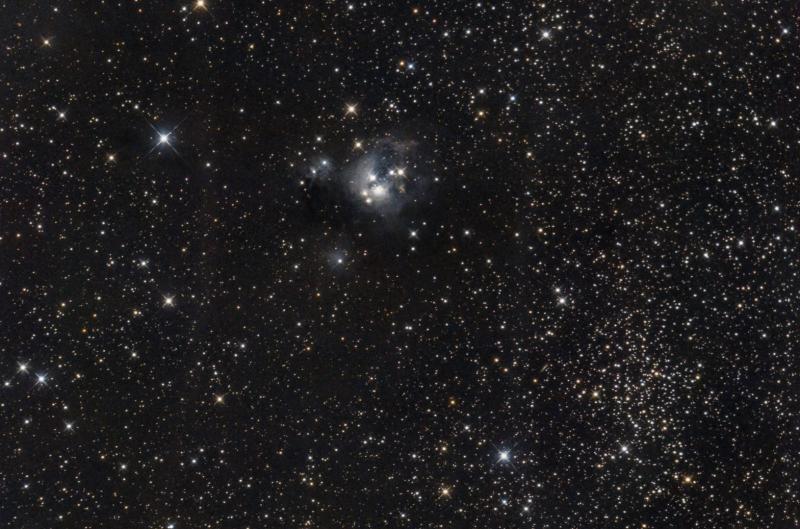 My first capture of NGC 7129 and indeed it's a challenge. With these kind of object it becomes very clear that my set-up is oversampling. But I knew this when I purchased this all so I'm okay with that 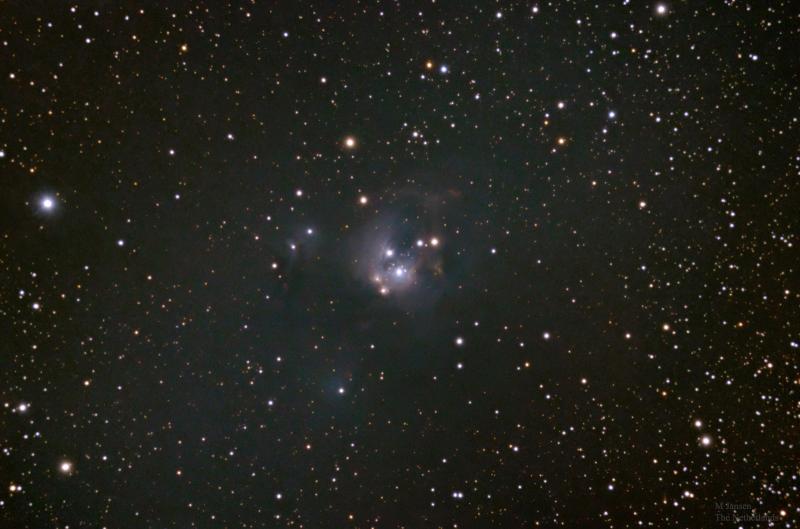 I am not a beginning/intermediate imager, and have no interest in entering any sort of contest, but I happened to have just finished imaging this object, and thought that perhaps people might like to see what I did with it from Bortle 3 skies with a moderately large telescope.

If you want to see it without the awful compression that this site does to photos, there are various versions here:
http://de-regt.com/A...omy/NGC7129.htm

Images taken on many nights in July and August of 2020.

Here's my take at it, recorded Sep 9.  I had intended to only image without moon, and over several nights for compensation.  Unfortunately bad weather since then, and even the first day was hampered by awful seeing, and I had to stop early 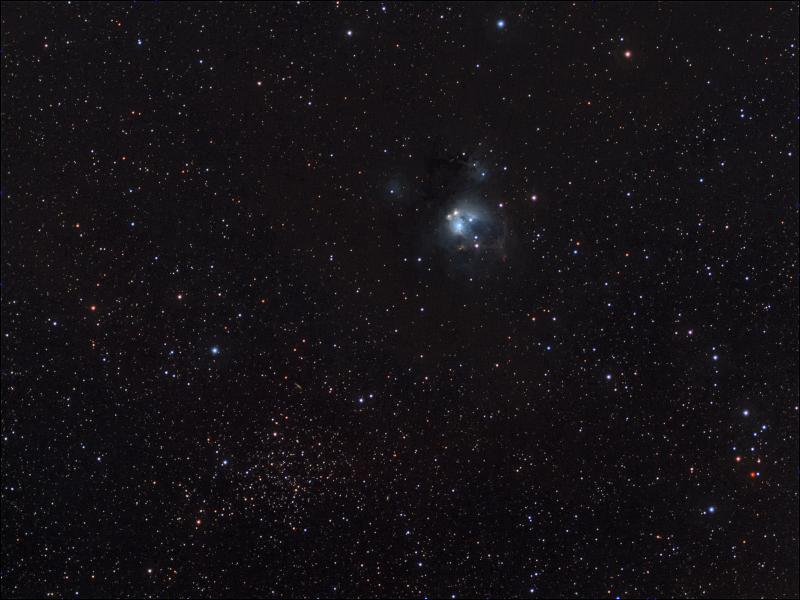 Powered by the Penguin

I am working with a Celestron Nexstar Alt/Az mount with a 130mm reflector.  I captured the images in Sharpcap using a ZWO ASI 224MC camera.  Lights are 976 x5 second subs, 60 darks, 600 bias frames, taken over 3 nights with a lot of moon in early September.  Processed in Astro Pixel Processor and ACDSEE. 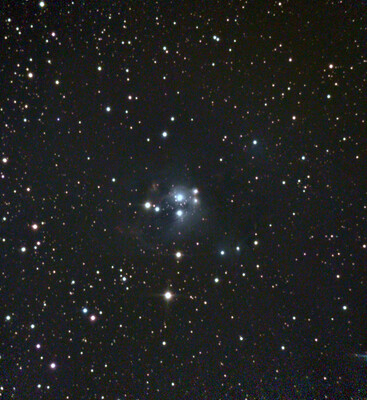 This one truly was a challenge for me.  I recently got a new Altair Hypercam 183M pro and I have been taking narrowband like crazy.  I put in the LRGB filters and shot this target one night when the smoke from out west was over head.  I had to reshoot it all because I couldn’t process it.  I haven’t had much trouble integrating narrowband in the SHO palette but integrating LRGB is a struggle for me.  I don’t seem to get enough color in my combined image.  I made a post here with M45 that I processed from the same night and got feedback about lack of star color.  I have watched some YouTube videos of a couple different integration methods and none of them are making me happy.  This is the best I can do so feedback is welcome via pm to not litter this thread.
Scope: AT72EDII

Photoshop 2020 work flow: each sub- linear stretch (in levels) of grey point to the right of histogram peak, then covert to 16bit.

convert R to RGB file, copy and paste G and B into channels

The smoke cleared just in time to grab two quick nights' images, before the Moon makes another of a mess of the sky.  This is also a "First Light" image for the new ASI2600MC-P camera, and as such, a first time doing a complete imaging session under the acquisition control of CCDciel.  The prior camera, a Nikon D3200 DSLR, used an Intervalometer for clicking off the subs.  Interesting transition, which happened fairly painlessly, where I had different procedures for the mundane stuff such as focus, and a new / better source for Plate Solving (instead of using the guide camera).  An on-camera 2x2 binning kept the download time short, so as to not eat into the imaging time.  Download time was zero with the DSLR since it went to the on-camera SD card.

The ASI2600MC-P has a QE of 80%, vs the Nikon's 50%, and it can actually see Ha.  I expected it to be a lot more sensitive than it turned out to be.  To be fair, I was running the Nikon at an ISO of 3200 or 6400, and short 20- to 30-second images to avoid AVX tracking / guiding issues.  I started the ASI with its optimal gain at 100 and a 10 second test exposure.  Didn't see anything.  Eventually, I settled on a gain of 300, with 1-minute subs.  Noise was still low, and by some miracle the guiding was the best it's ever been; probably should have gone longer.  I don't know if the guiding was due to the lack of mirror slap, a happenstance of where in the sky it was pointed, or what.  But, wow.  I just hope it wasn't a fluke.

Stacked in DSS, Processed in StarTools.  Slight crop around the edges for stacking artifacts.

After about 6 weeks of clouds here in Florida I just made the deadline last night. 93 subs at 120S with flats bias and darks. Shot with a 6" Astrograph with a  QHY168C camera guided with Orion 60mm Multi-Use Guide Scope and QHY5III 224C camera  on an Atlas EQ-G using PHD2 and APT. Processed in APP and PSE20 and Topaz Labs.

Lots of thin clouds and humidity to deal with. Focus was a heck of a challenge. FWHM varied between 1.7 to 2.3.

I think more Lum data can help reduce the noise seen in the lower part of the image. 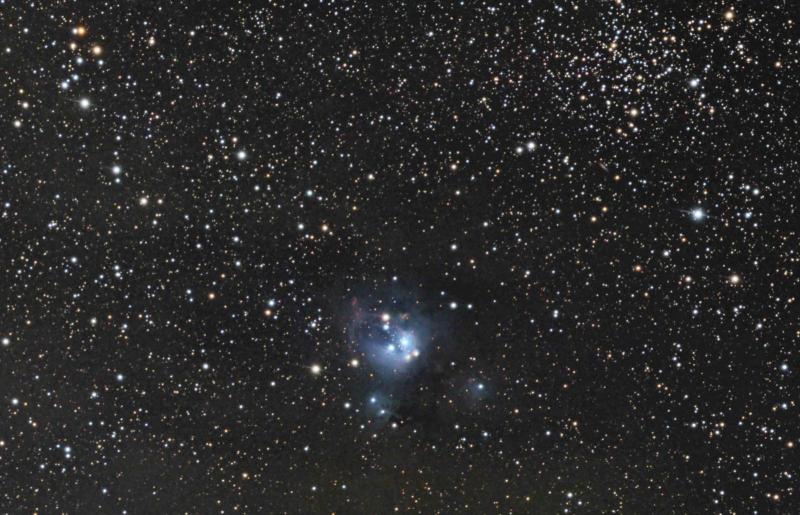 The winner of this months challenge is post #13 by Jmw845.

I will post next months challenge when I am able. Thank you for participating everyone.