88 replies to this topic

Nice Job Terra. A neat lightweight package. I like the spider arrangement. Hey I like the whole setup.

Nice Job Terra. A neat lightweight package. I like the spider arrangement. Hey I like the whole setup. 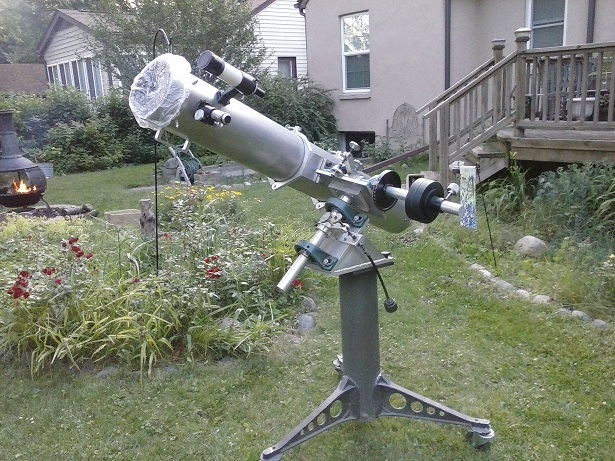 I made the mirror back in 1966.  It didn't look like this back then.  It had a sonotube for decades.  Refurbished it a few years ago.

The mount is one of my homemade mounts with tangent arm slo-mo controls on both axis.

I reworked the mount and added a Cave drive: 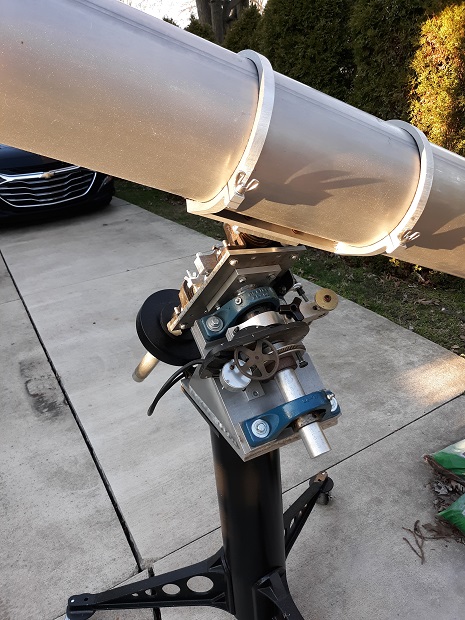 Just about everything was handmade.  The tube rings, the mirror cell, and the secondary spider: 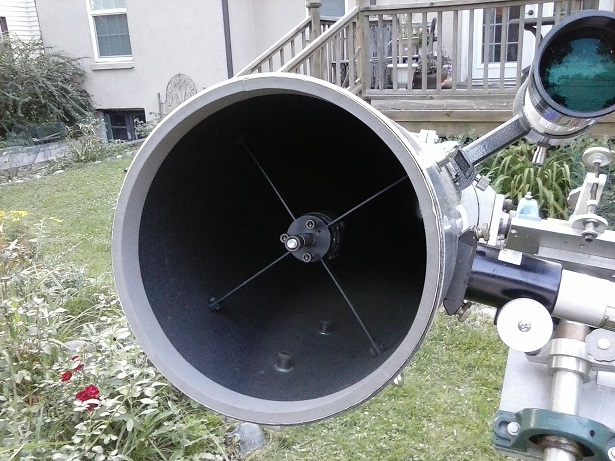 I still have my journal from back then.  When I observed something, I wrote it down.  I have many small drawings of Jupiter at 290x.  One of my favorites shows the GRS and two satellite shadows in transit, and Io crossing too. (that was March 28, 1968)

It's really a great performer.

People keep askin' to see classic reflectors. That's good. They're nice to look at and dream about.

I am fortunate enough to own one, which has some history, as well.

Classic scopes are slowly becoming  a rare item..  The owners are aging, and the "up and comers" are

leaning towards modernization in equipment.

worked on it, myself.

I agree, to me you just can't beat the looks of a classic reflector.

I'm not sure what will happen to my old little 4" scope. The grandkids can't find the USB port on the babbett bearing mount, so they are not interested in it 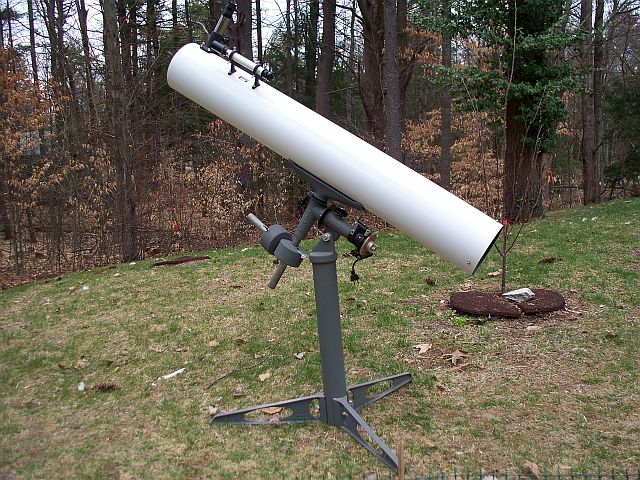 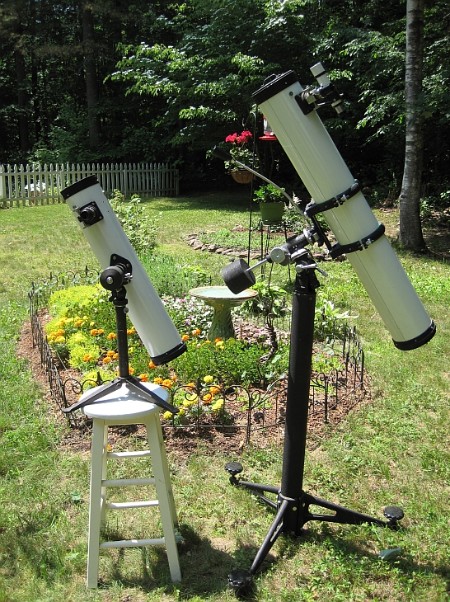 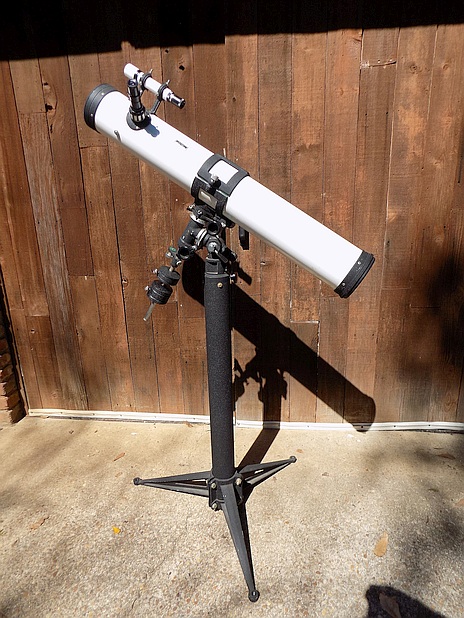 My very first was an 8.5" F8 Fullerscope on their Mk 3 mount, like the one pictured below. It had "Grade A" mirrors, as used in the white export models.

Today was the second day of this year's astronomy class. Because of some scheduling issues, it's going to run all year, varying from 1 to 3 days per week, so I'm psyched to have the kids able to observe through three seasons.

I handed out a sheet with pictures of the different kinds of scopes I can loan them (60x700, 60x900, 75x1200 alt-az, 60x900, 75x1200 equatorial, 4.25" Edmund reflector, 6" RV-6 or Edmund, 8" dob) and asked them to let me know their preference by next week. I also showed them a Unitron 114. The last few years, the 60mm alt-az scopes have been most popular, so I spent a good bit of the summer getting some recently acquired ones into shape, and just hoping that a few students would be willing to take something bigger or equatorial.

Six of the twenty students handed me their sheets right at the end of class. I was just looking them over, and you could have knocked me over with a feather. Three of them want the 8" dob as their first choice (with a 6" as second), and two want 6" scopes as their first choice. The sixth wants an equatorial refractor (60 or 75 mm) but would take a 6" as a third choice.

So now I need to get the optics cleaned on the RV-6 that was donated last spring. I only have three 6" scopes and the one 8" dob. But one of the students did mark the Edmund 4.25" as a second choice.

I'm shocked, but delighted, that all of the classic reflectors will be going out on loan.

And then, as I was packing up, one of them started asking about what it would take to grind his own mirror!

I think it's going to be a fun class!

ps., in case you're wondering about my having in-person classes, here's what we're doing:

I might be the only one on this forum that has never owned a Newt.

I fall into that category as well

need to try it out when weather clears

Here’s the reflector I made in 1967 (6” F4.5), still going strong after 53 years. I used an Edmund mirror grinding kit and Thompson’s book. I ground and attempted to parabolize the mirror, Cave Optical refigured it and Pancro coated it. The original coatings still look great. I had the galvanized, rolled and seemed tube made at our local sheet metal fabricators that summer. The cast aluminum cell, brass diagonal spider, and focuser were from Jaegers. (The secondary mirror came from Cave when they refigured and coated the primary.) I purchased the mount from Edmund using lawn watering, baby sitting, and pet care money. I got the tube powder-coated about twenty-five years ago, flocked the inside of the tube with protostar flockboard four years ago, and rebuilt the mount/pedestal three years ago. I last used it six weeks ago to view Comet Neowise and it still works great!

Terra,  your story is very similar to mine.  I ground a 6” f/10 in 1966, but lost confidence at the very end and had Cave finish it.  I think Pancro coated it.  I had an Edmund kit and the Sam Brown book as well as Thompson.   I put it in a cardboard tube from Edmund and built a pipe fittings mount since I worked in a hardware store part time.  Eventually I had it on an un-driven Edmund Mount.

I still remember my first view of Saturn!

Very nice.  The 8” was the dream scope when I was a kid. Unique design and looked sciencey to my younger eyes.

One of my favorites in the Edmund stable......1965 or so 4.25 Palomar setup on a Heavy duty mount with short tripod and clock drive.  The secondary came with a very nice quality prism instead of a flat.

Gort is all Edmund 4-1/4 inch with a special egg shell thin Titanium tube. 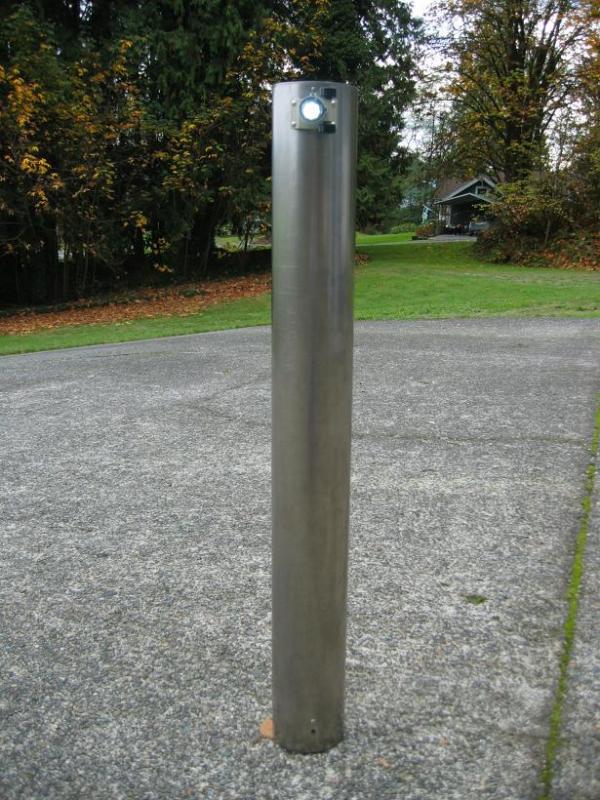 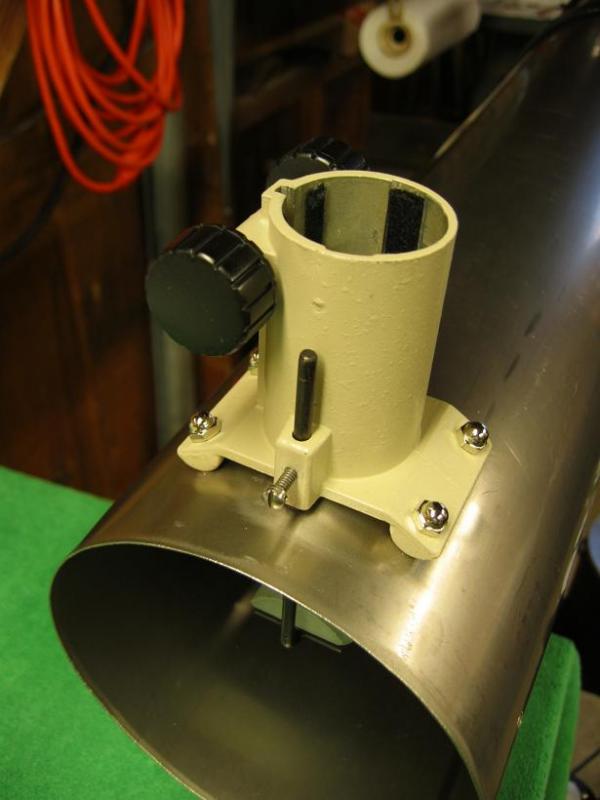 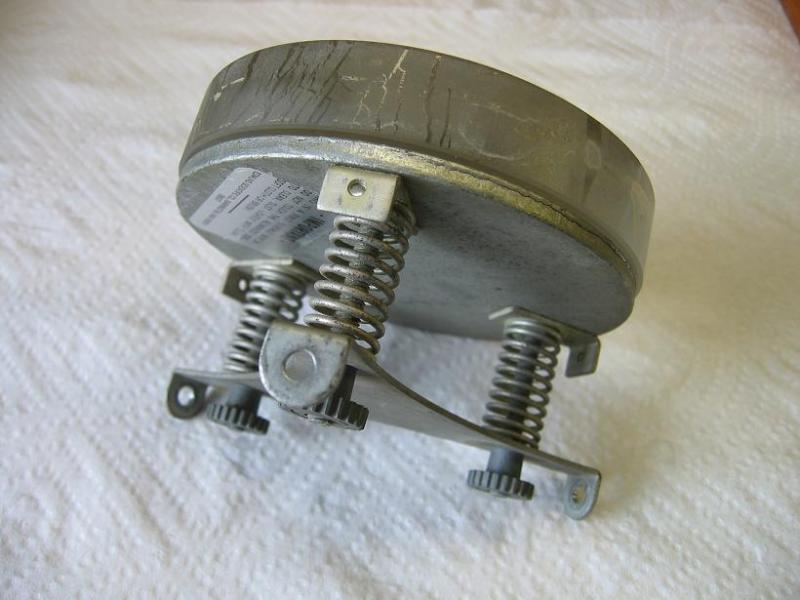 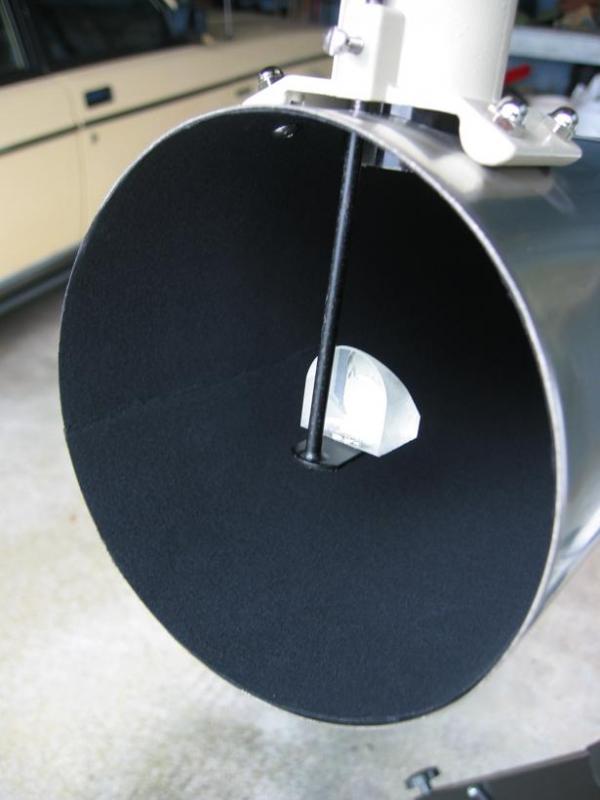 Very nice.  The 8” was the dream scope when I was a kid. Unique design and looked sciencey to my younger eyes.

All of Cave's experience is evident when you look at this beauty and observe with it. 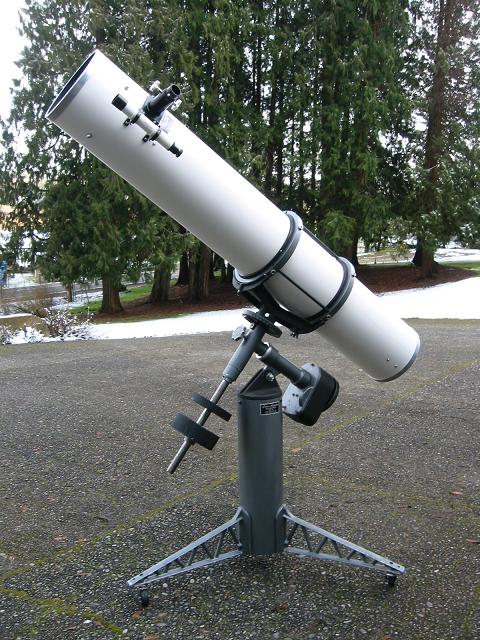 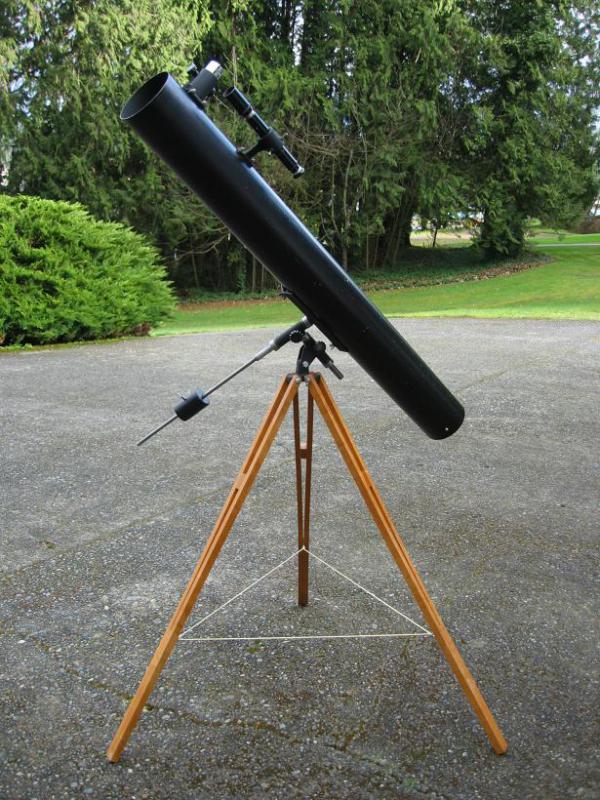 Here's a couple of classics 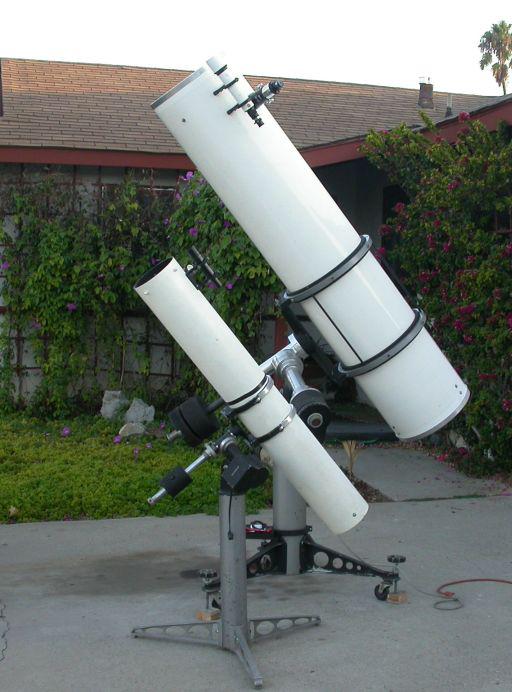 This thread brings back memories.. "oh yeah, I had none of those."
The Edmunds red and whites are enchanting.
Jon

And to think, I have a perfectly good one with ex mirrors (needs recoating) Unused for nearly 14 years in the basement!

They are an excellent youth scope. My bad back cannot stand the bending, even on a stool!

It was my first Real scope! I worked on another farm in the 70's for 2 years plus my allowance to earn enough to buy her!

When the coatings were good, it could produce planetary images that were better than most SCT's

I had this one for a time. Had to let it go tho. Just to many at the time.

One of my favorites in the Edmund stable......1965 or so 4.25 Palomar setup on a Heavy duty mount with short tripod and clock drive.  The secondary came with a very nice quality prism instead of a flat.

That is an impressive looking setup.

These F/10 spherical mirrors when collimated with a good quality secondary provide stunning views for their aperture.   The original mounts they came on are adequate (called the "medium duty mount") but when paired on a more solid platform like the Heavy duty mount made for the 6 inch space conqueror and the 4 inch refractor they are rock solid.  I personally like the short tripod better than the pier but I have both.

If you ever get a chance to grab this Edmund model it comes highly recommended and not just from me.  I believe DavidG commented recently in a different thread:  "The mirrors in them are spheres and if it is a  sphere with no zones the result is true 1/8 wave system. That is better then most commercial scopes so again with a good diagonal mirror you will have very sharp optics."


Also tagged with one or more of these keywords: classic, dob, equipment, optics, reflector