124 replies to this topic

If you’re on this forum, you’re familiar with Dave Trott’s video reviews of the “Tiny Tak” and the comparisons with similar sized telescopes.

Well, Ed Ting will be posting his video review of the FC-50.  In his words:

“I have all the material filmed.  Now comes the time consuming part - editing the footage so it makes narrative sense.  I think the material is decent but until I see the final cut I'm not sure when it will hit YouTube.”

So there you have it!  I know I’m looking forward to it!

I am also a big fan of Ed Ting. His videos are top notch.

And I completely understand his comment about editing. It is a huge amount of work to make one of these videos...at least for me it is. I usually spend many hours researching and then I shoot much more video than I actually use. I aim for a video of about 10 to 15 minutes total length as that corresponds to a reasonable attention span for most people. The choices as to what to omit from a video can make the editing portion of the project pretty time consuming.

Ed is a real pro. He does is all with penache! I look forward to seeing his review of the FC-50.

I'm back in the Tiny Tak camp as of today with my purchase of an FOA-60!! I'll have it sometime next week!!!

Seems to me like... for small Classics, these Tiny Taks make a Big Impact.

I'm back in the Tiny Tak camp as of today with my purchase of an FOA-60!! I'll have it sometime next week!!!

Seems to me like... for small Classics, these Tiny Taks make a Big Impact.

Thanks Bob! Yes, these tiny Taks are fabulous!!

My Tak FOA-60 arrives Thursday and I'll be able to give it a thorough daytime terrestrial object test but no nighttime observing for at least another week.

My FOA-60 arrived today and I had a chance to observe the sun with it. It's absolutely fantastic!! The best Tak I've ever owned and I'm very much looking forward to observing the moon & planets with this high Strehl Ratio refractor!!

I did some more solar observing today(Sunday) with my Tak foa-60 and the sunspots/groups were perfectly etched in the image of the solar disk at 75x. I've done more solar observing over the last two weeks than in the last ten years thanks to the rise in solar activity!! The Tiny Tak really delivered!! I counted 20 sunspots today vs. 18 yesterday through my 60mm f20. The 60mm Tak is an easy one trip out the door setup and is superbly sharp!! 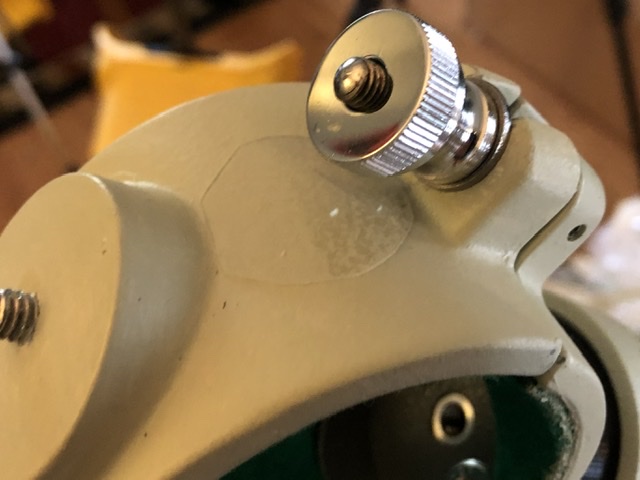 While I try to be careful with the bolts used to close clamshells, over time the bolt takes paint off in places.  I’m borrowing an idea from a bicycle group to counteract areas prone to wear on bicycle frames.  I’m using a product called helicopter tape or frame tape.  Presumably, helicopter tape is strong enough to be used on helicopter blades.

I’ve used some touch up paint on the worn spots, then a few days later I apply the tape.  Use rounded pieces, pointy corners would be the first area that might lift.  Helicopter tape is too thick to be bent over a 90 degree angle.

For 90 degree angles, I use a product called tenacious tape.  This is a product used on tents and other camping equipment, and so needing to hold onto fabric and be waterproof, it is very “tenacious” in its holding power.  Being much thinner, it won’t provide as much abrasion resistance.

Both of these products are relatively unnoticeable.  I chose the accompanying picture because it appears visible at that particular lighting angle.

What I do is put a rubber band or o-ring on the thumb wheel, to protect what it might flop against, and a nylon washer under the steel washer, to protect the edge of the flange when rotating a not fully loose screw over it.

A few hours ago, Ed Ting released his video about the Takahashi FC-50.  With his typical understated humor (humour for our British friends), he nailed it on why those of us that own these, enjoy owning them.

Dave Trott, I know you’re out there!  Somehow we need to get you, Ed Ting, and Roger Vine from the UK to collaborate on all things Takahashi!  I have a Japanese supplier that knows a lot too, but have only communicated via text, so I don’t know how much spoken English he understands.  How ‘bout a Zoom call!

Anyway, Ed’s review is out there!  Check it out!

Once again, Ed has produced a superb video!

It's hard to match Ed's high standards so I don't even try. I usually focus on the more vintage scopes anyway. But I happen to have a beautiful little Takahashi FC-50 in this video:

And I am working on a couple of videos about very early Takahashi TS scopes. Stay tuned for those.

So much of my interest in Takahashi in general, and your videos about the FC-50 had lead me down that “Takahashi” path!  I gotta tell ya’, I’m kinda obsessive/compulsive, so I’ve actually watched so many of your videos, especially the Takahashi subjects, several times over.  You and Ed BOTH produce EXCELLENT videos!  I know so many are so appreciative, as am I.

I really do consider that you, Ed, and Roger are the English speaking trifecta of Takahashi reviews, with a young YouTuber by the name of Vlad on AVT-Astro channel putting out nice videos that I look forward to.

Looking forward to your TS reviews.  I have a TS-100 f/10 Newtonian mounted as a dobsonian.  Naively thought that size would be a light telescope.  THAT’S why I need your reviews!

Thanks for your kind words! That's what keeps me going.

I know what you mean by the TS-100. It's a bit of a beast, huh? Like all Takahashi Telescopes it's way overbuilt. But, wow you get some nice color free views. Refactor-like. You think it's heavy as a dob? Wait till you see my review on it's original mount!

Wow, I am sure that is a hefty scope!

Finally got a Finder on my Tiny Tak: 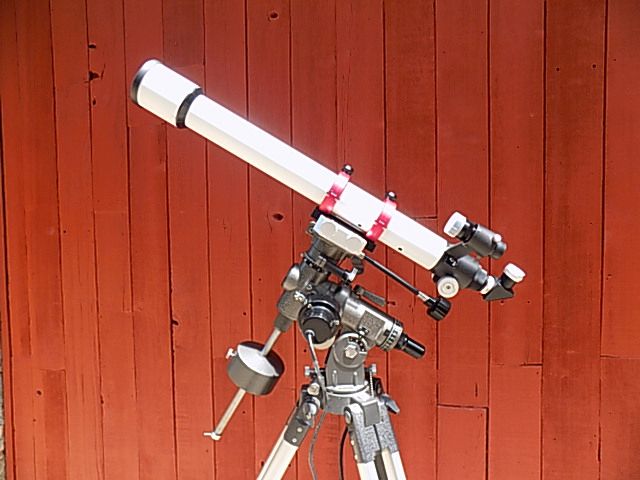 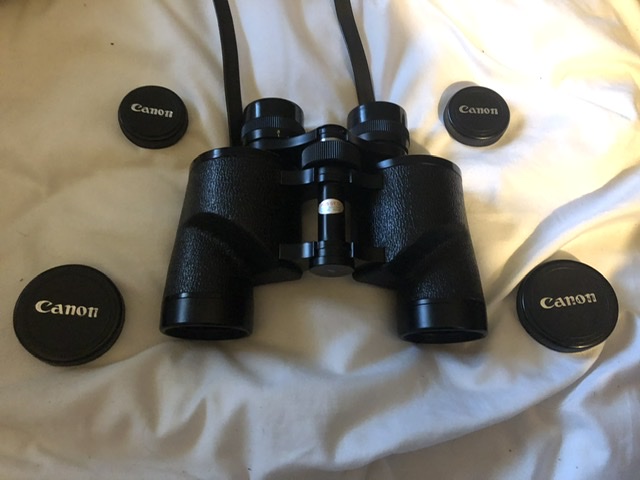 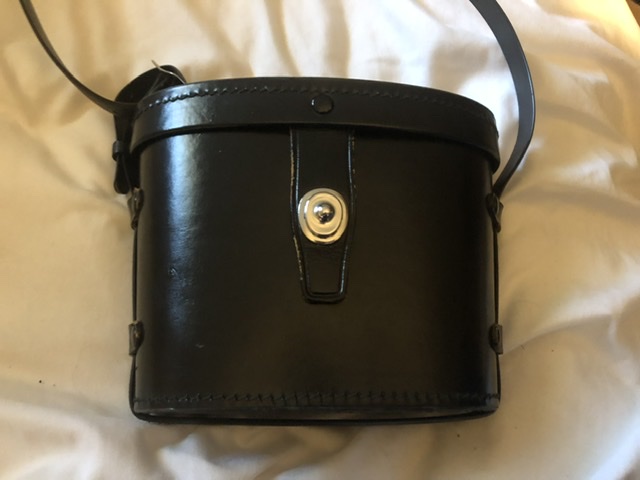 More equipment for my Takahashi FC-50 “observing system”.  I bought an FC-50 as a small travel telescope.  I’ve been wanting a small, fine set of binoculars as an aid to seeking astronomical objects.  I lean toward smaller binoculars to take up less space when packing for travel.  6X30 binoculars yield a nice 5mm exit pupil (probably larger than my aging eyes dilate) and are small.

I have seen the small Zeiss binoculars going for reasonable prices on eBay and did a search.  This set of Canon Camera Co. came up at a reasonable price.  I have read that Takahashi uses objectives manufactured by Canon.  Furthermore, there is a set of Takahashi 7X40 binoculars on eBay, that looks very similar and has a leather case which matches the case that was with this Canon.

The seller came back to me with a lower price and I snapped them up!  Wow!  A really nice set with the bak-4 prisms that throws up bright images.

As time allows, I’ll try to show my full FC-50 travel package.  Going to Colorado with it next month and Mexico next November!

Indulging in Takahashi adapteritis.  Just received a 1.6X-3X vari-extender that I believe to be period appropriate for a 1991 FC-50. 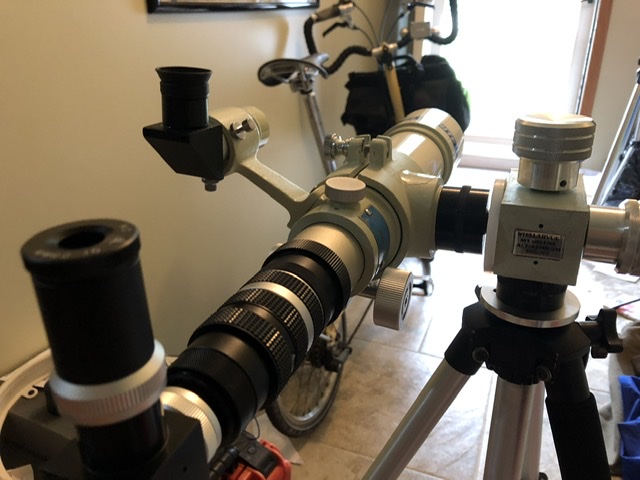 I don't know what year they discontinued FC-50. Here is 1992 FC-50 with newly designed flattener.

I was able to spot cassini division with this small scope.  It is excellent 50mm f/8 scope. I’ll be curious to see some astrophotography with your FC-50!


Also tagged with one or more of these keywords: classic, equipment, refractor