Between different apertures, the smaller one has a sort of "advantage" in being unable to detect as much detail as the larger rival: in such case it is possible that the view in the smaller telescope will look "sharp and steady" while that in the bigger one "mushy" but, if we assume equal or equivalent optical accuracy, and pay attention to what can be seen, the larger telescope will show anything which could be seen in the smaller one, and often something more, even if likely not to the very extent of its capacity.

Also, since a larger "disruption" is required to compromise the views in the smaller one, chances that the view will be steady for a longer time are much higher.

The steadiness plays a big role in apparent sharpness.  From the binocular world, premium glass from Swarovski or Zeiss may beat a Canon IS L binocular when mounted on a tripod or stabilized with a harness.  However, when hand held, the ability to have a more stable image allows the eye to pick out more.

The extreme of this would be a under-mounted telescope where microvibrations and wind cause motion of the image compared to a stable one.

One of the benefits/trade-offs of small-aperture refractors is that you gain stability both from being affected less by seeing and ground thermal currents in the cases where the primary optics are a greater distance from the ground.

This article is the source of the controversy on this topic, arguing that longer is better (by Lord and Gordon).

They also stick up higher so less air to blur the image.

And keeping body heat out of the light path is a definite advantage of slow refractors. 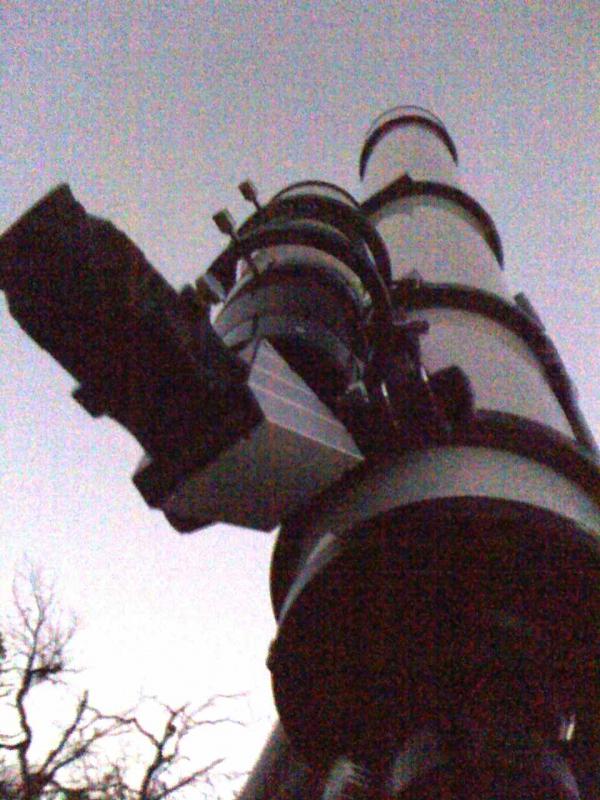 I have found haze affects a view less in slower scopes.

Thanks for the many good answers. Yesterday I repeated the experiment on Jupiter. This time the 100mm f/7 ED was clearly superior to the 80mm f/11 achro. The seeing has been very volatile in my location lately, which makes it hard to compare scopes. While you're changing eyepieces, the seeing becomes better or worse. For me, the best scope seems to be the one that allows me to spend the most time at the eyepiece, to catch those fleeting moments of good seeing.

For my taste i like slower scopes vs fast.  Fast APO's or fracts have FC while fast Newts have coma.  Coma drives me nuts faster than F/5.6.  Most of my viewing is high power planet work. Also shallow focus drives me batty.  So slow wins in my book.

My understanding of this topic is that while slower focal ratios increase the depth of focus, they also increase the "swings" in the point of best focus caused by seeing. A slower focal ratio does make a telescope easier to focus and that is probably the benefit people are seeing, but it does not impart any "resistance" to seeing. It just makes it easier to find the point of best focus.

To me seeing affects all scopes the same. They all gotta look thru the same air. And i have some of the best seeing in the world living right on the gulf. I find big Newts have given me the best all times images at 600x and over 1100x on my best nites.

The steadiness plays a big role in apparent sharpness.  From the binocular world, premium glass from Swarovski or Zeiss may beat a Canon IS L binocular when mounted on a tripod or stabilized with a harness.  However, when hand held, the ability to have a more stable image allows the eye to pick out more.

The extreme of this would be a under-mounted telescope where microvibrations and wind cause motion of the image compared to a stable one.

One of the benefits/trade-offs of small-aperture refractors is that you gain stability both from being affected less by seeing and ground thermal currents in the cases where the primary optics are a greater distance from the ground.

That's not an extreme.  It is so normal for telescopes to be under-mounted that I don't think there is more than one in twenty that has what is, in fact, a stable system.

I don't think smaller apertures are affected less by seeing.

The c8 is harder to focus, no excuses there, the company has been criminally negligent about improving the focuser in the era of the apo.  So if you don't focus just right you get "bad seeing." (out of focus)

The 92mm comes equipped with a gaga beautiful two speed focuser.  It is much easier to focus at 1mm exit pupil and less due to that exquisite machining.

As you sit there saying, "by golly it really is a better view in the 92", you pause, and think wait a minute.  You remember you have the c8 at 200x and that in bad seeing you have to reduce magnification.  You reduce the magnification to a 14mm (in the c8), which is 143x, and suddenly your close enough that the views are equally crisp (or equally uncrisp).  The details in the c8 are better and the color saturation is better.  Of course they are.  It's a 200mm aperture.

This is not strictly speaking a question that can be answered, since the question is not about optics but about mechanics.  Some aspects of telescopes are dictated by the Gods of optics.  It is they, for example, who have decided that the human eye really isn't going to be happy with magnifications high magnifications in excess of 0.5 mm exit pupil.  The thing can be done, but not particularly well.

What you might say is that is that telescopes with excellent focusers go into the territory of <1 mm exit pupil armed and ready for the challenge.

A cheap SCT does not.  The focus mechanism is inferior.

But wait there's more!  You have a 4 inch apo closing in on 200x you are in the zone of focusing carefully.  You are also in the zone of dimming out.  The c8 with the lousy focuser is still at 1mm exit pupil.   The image is brighter.  It is beginning to be difficult to focus.

Another scope might have a more sophisticated focuser than an SCT.  Hellsbells, SCTs used to have better focusers than SCTs!  The white and blue Pacifica SCTs had a pulley system that moved the mirror with equal pressure from two sides.

One can do better.  It's just that they choose not too.

Seeing conditions generally cap out at 300x. 1.2x per mm in this case.  Even 25" Newts are capped at 300x a lot of the time.    If you get a long Cassegrain like the ten inch Aries f/15, you're looking at $15,000 new.  A 7.5 mm ocular will deliver 500x.   So you have all this magnification capability that you're only rarely going to use unless you are well heeled enough to have a place in the Canary Islands.

So there's a lot of things you have to put together.  I would not want an f/15 ten inch Mak; f/11 is more than enough for me thank you.  And I like the light bucket.  There are also Maks that are more along the lines of f/7, but at those short focal lengths they will have to widen the meniscus (increasing the dreaded central obstruction).   If you increase the dreaded central obstruction you might as well get an SCT. (Mak users will disagree!) And you've reduced focal ratio, so you're reducing your depth of focus advantage which is why you wanted to look at this to begin with.

You can get a long refractor.  Add $5,000 to your mount costs.   Many of these will not fit in a Honda Accord.  some will not readily fit in a minivan.

In sum it's very hard to outfox the Gods of Optics on these matters.

In the end I would not buy a scope on depth of focus criteria.

I assumed the OP was talking about fast and slow refractors. I don’t know if compound telescopes have the same depth of focus at similar F ratios. But probably not. Extending the focal length of a fast primary, either with a corrector plate or barlow lens, won’t make a reflector perform like a slow refractor.