Imaging after the meridian flip

So last night because of the smoke from all the fires, I was just going to experiment with some oddities I've been having with the HEQ5 mount (sometimes pointing west and down for Andromeda, or North East and down for Jupiter, and sometimes not). But it got so clear that I couldn't let the night go to waste without capturing something, so after 10 o'clock, I got the dumbbell nebula framed up and starting seeing how long of an unguided exposure I could get (only 90-100 seconds

Because I got such a late start and the camera was getting real close to the tripod leg, I had to flip to the other side to continue. After manually getting the target centered up in the frame again as best I could, I took another 20 minutes of frames and called it a night about midnight.

What I did manage to get: 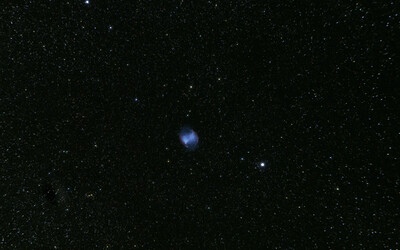 I'm unfamiliar with Starry Sky Stacker, the stacking program I use automatically rotates or flips images as required to stack.

If you manually rotate and save your images taken after the meridian flip will they then stack with the ones taken before the flip?

If you manually rotate and save your images taken after the meridian flip will they then stack with the ones taken before the flip?

Sometimes the easiest answer is the best answer

. Worked just fine after I rotated the image 180 degrees. I was expecting it to be handled because when I've been taking pictures before and the camera moves enough to mark the images with a different orientation, I usually get a message like "The orientation of the following images has been changed" when I feed the RAWs into Starry Sky Stacker.... Maybe a full 180 degrees is too much for it, because what I've seen it handle before is usually horizontal to vertical or vice versa.

Give Siril a try.  It is free, open source, and has builds on many operating systems.  It easily handles images of any rotation in its registration.  Works great for me pre- and post-meridian flips across multiple nights.

Pix Insight handles meridian flips extremely well by using triangulation...there is a "tick box" to select that method and you don't have to worry about turning things around before hand. I think the program is worth it for just that alone, plus stacking and aligning is much simpler that using Photoshop. Mind you, I still use Photoshop for the touch up of my final images. PI + Photoshop =

Astro Pixel Processor is pretty good at it too. Also, APT can automate the process with SessionCraft and plate solving to precisely frame up the target after flipping. Its pretty sweet.

Astro Pixel Processor is pretty good at it too. Also, APT can automate the process with SessionCraft and plate solving to precisely frame up the target after flipping. Its pretty sweet.

+1 for APP. It's core function is preprocessing integration. It's fairly simple to use, especially compared to PixInsight. The analysis and integration features are deep, yet not overwhelming due to sane defaults that work very well for typical data (you don't have to change most settings and can micromanage it as much or as little as you like.)

I can give it multiple session folders of hundreds or even thousands of subs and it sorts them by session and filter, it can take a minute or less to go from opening APP to start it chewing on data.. I don't have to do anything special when the subs are part of a multipanel mosaic. Meridian flipped data is nothing special. The resulting masters are as good as (and I think perhaps better than) any of the few integrations I've done using PixInsight and are just flat out vastly simpler to do. I've moved to PixInsight for processing but I moved back to APP for preprocessing and integration. PI seems primarily designed for manipulating data after integration, APP seems designed primarily to stack subs and do it well. I used DSS before APP, and it was a huge step forward in options and quality for me.

Also a shoutout to NINA for meridian flips. I used APT before NINA and SessionCraft mostly worked fine but was a bit fiddly to configure. NINA's meridian flips also work fine and were too simple to set up for me to even remember doing it.