Help with webcam planetary imaging (What am i doing wrong?)

This is my firs post on here so let me introduce my self. I am 14 years old and my name is Milos. For past 3 weeks i have been trying to get a good video of Jupiter to process to into a good image. I have 150 mm diameter 1400 mm focal length reflactor and a c160 webcam. I am getting best results without a Barlow 2x but i would like to see some more detail. i should say that i am using a manual mount and for videos provided (google drive link).  I am using fire-capture 2.4. (when i try downloading any other newer version it stops half way and writes network error).My question is how to improve and what am i doing wrong? Video name starts with mars because when i try to change it to Jupiter in fire-capture it crashes it. I know colors are bad i forgot to turn off auto withe balance.

Any help is welcome. Thanks in advanced and i wish you all excellent seeing.

My first thought with looking at anything is what are you stacking?

80% of planetary imaging questions/problems fails to say if they stacked the best 10% or tried to stack the whole video.

The process you should be sort of following is:

Load video into AS3 or Registax.

Tell AS3/Registax to identify and stack the best 10% or 200 frames that closest match the "best" frame.

At the end you should have a composite stack of JUST the best frames.

Most frames will be worthless and if you stack all frames then you are stacking say 9 bad frames and 1 good frame. The good frame has no chance and is beaten to death by the poor ones.

Now you may have done this, in which case I apologise but so many read that the person took a video then stacked the lot. Understandable as it is often not mentioned and in DSO imaging you stack the lot. Well until DSS decides some are a waste of time and throws them out. But the person tries and DSS actually decides.

Video's look out of focus a bit, and unsure if the stacking software will stack the images with that apparent degree of movement.

So focus need attention, needs to be sharper, guess you need a more stable video simply for the software to stack, and either say how many you stacked or limit the next to 200 good frames or that area.

Think that people say AS3 is better for stacking and Registax for the small processing - wavelets. Strange name.

For utter ease download Registax and use that one alone for now. Having 2 and transferring just adds complications.

Nothing sort of major, as ever the small bits.

Thanks, I have done processing with AS3 and registax 6 picture is in google drive folder. Next time i will do better focus. What else can i do to improve pictures and why do i get much better image without Barlow 2x? ( I did not upload picture with Barlow 2x )

Echoing what sg6 said.  I use a similar workflow:  record in SharpCap >  stack in AS3  >  sharpen in Registax.  (Registax hangs when I try to use it to stack so I just use it for sharpening.)

You manually tracked well, but it may require an even steadier hand for the software to stack effectively or for you to get even more usable frames.  Experiment with using the best 10%, 20%, etc. of frames.

To me the videos look dim - and it appears that you are at gain=0 while recording.  Experiment with adjusting gain and exposure time while recording.  If you boost gain some without getting too much noise in your final stacked image you may like the results better.  You'll need to stretch the histogram in processing to get an image that isn't too dark.

Hope that's helpful - and keep it up!

If you are out of focus, then the barlow is just going to magnify that, you'll notice it more because of the larger scale.  Also, as you increase the image size with the barlow, you decrease the apparent brightness of the image.  Both of those things combined will make the image with the barlow appear that much worse.

Thanks, I knew about less light when using Barlow but i was at max exposure. i will upload a picture when i go out next time. If i have some problems i will ask for help.

Thanks again and clear skies to all of you.

What is the best way to focus. I cant focus on a star because it will be hard to find Jupiter after that?

Moving this from EAA to Solar System Imaging & Processing for a better fit.

Oh dear. So much poor advice.  On behalf of solar system imagers, I apologize for the misinformation, Milos.  But you're in the right forum now.

First, AutoStakkert tells me 80% or so of your 1790 frames are above the 50% relative quality criterion. So I'd proceed to stack 80% of them, in this case.

However, the issues really lay with the raw (or in your case, not raw, but slightly 'cooked') image data.

Firstly, your focal length (hence f-ratio) is significantly too short. Jupiter is only covering 40-something pixels in the image.  And the captured data is already RGB, compromising resolution further.

Jupiter should be at least three times that diameter. You need to be using at least a 3x barlow to get good data.

I know, even using a 2x is giving you an even more blurred image. There could be several reasons for this, primarily SEEING. The atmosphere is rarely steady at the scales we image at. But some times will be better than others.  The second contribution to blurring is the low elevation of your target. The only way to partly counter that is to use an ADC in your imaging train, particularly as you're using a one-shot color camera.  As pointed out above, focus MAY also be an issue - I can't really tell due to the scale of the data provided. And you need to make sure your reflector is as well-collimated as is humanly possible.  Focusing on a larger target is also easier than focusing on a really small target. Use the belts, GRS or festoons to determine the optical focal point on Jupiter.

Using AutoStakkert to stack is just fine (desired, in fact). But try to stack thousands of frames, not just a few. I see your frame rate was 19fps. That's awfully low - that will also lead to smearing. And it will take you a while to build up a few thousand frames. In fact, at that rate, I would recommend recording for 180 seconds at a time. Even that would only get you around 3400 frames, so most of those better be good ones!

Registax can be used for color tweaking, wavelets (deconvolution) and resizing.

I like your enthusiasm and drive to succeed at this. You WILL get better. If you were to change just one thing requiring money, I would upgrade your camera to a ZWO or QHY. That would give you the biggest bang for your buck, as they say.

Thanks I will provide a image of a defocused star so i can know if the collimation is right. Seeing is bad because i was on top of warm asphalt ( i go out of city on Saturdays ). Working on adding a ir filter on my camera because i just found out it was sensitive on ir. I have a 3x Meade Barlow (I hope it will be good). It will be hard to focus and manually follow Jupiter with 3x Barlow. I cannot use ADC as i don't have one. I will think about buying a camera but for now i cant buy it. I will try to get better focus next time. I am now going to bed.

You're off to a good start with what you have. It would be great if you could find an astronomy club or even a university that teaches astronomy near you in Montenegro. The 6 inch by 1400mm reflector that I have seen is a short tube design with a built in barlow. These are not known for the best optics but it helps to collimate it as best you can. You can use a star but you can also use a small glass or metal globe to reflect an image of the sun during the daylight. Set it as far as practical, 50 meters would be good. The next thing you can do with what you have is add an IR filter to your webcam. Most webcams the IR filter is built into the lens and you lose it when you adapt the webcam to the telescope.

Once you have collimation and an IR filter, use the 2x barlow. It is possible but not easy to get an image with what you have. If you can find some other astronomers near you they may be able to loan you some better equipment to practice with. Considering the equipment you have you've learned a lot in three weeks!!!

Thanks to all who have gave me an advice, I will post my next picture when I go out with my telescope, but forecast says clouds until next week.

I got out today and this is image i got. Sky had a lot of smoke and seeing wasn't great. I didn't use Barlow at all. Drizzle 1.5x with 180s video .With a IR filter color was better and image is better. 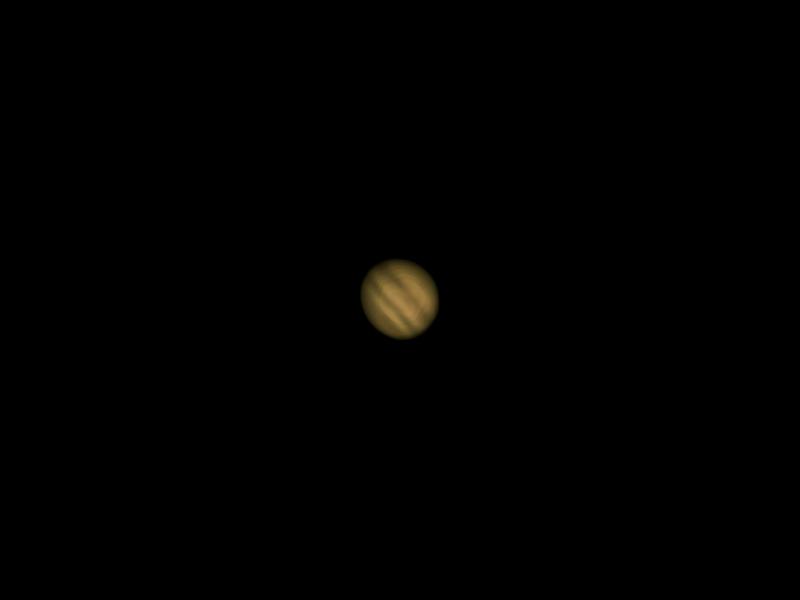 
Also tagged with one or more of these keywords: imaging, reflector, solar, planet, moon, collimation, beginner