What does "gain" setting on QHY 128c actually mean?

I am familiar, of course, with gain for DSLR cameras (where it is folded into the concept of ISO) and gain on scientific cameras, where it is a multiplier on the number of electrons in a pixel well.

It can't be a multiplier if the value 0 is a legal value.

There is a graph which relates the "gain" number to  "system gain" which has units electrons/ADU.  At gain 0, the system gain is 4.5 electrons per ADU, at 4000 it looks from the plot like it is about 0.2 .   For what it's worth, the plot seems to be of the function

That does not seem to be the case here.  if we have a scene in brightness B1 and gain G1, exposed for t1 seconds another at B2, exposed at t2 seconds with gain G2  the two shorts are equal if and only if exposure time t2 is

That's not particularly intuitive or useful.    Why not just make the gain look like ISO numbers?   Since the same sensor is in Nikon DSLRs it is clearly possible to make that happen.

I am surprised that there isn't more about this in the QHY manual.   Don't you need to know where to set the gain to take good pictures?     Since many people have QHY cameras and I see some great pictures out there I have wondered if there is some secret of setting gain that I have just missed it.

I have plotted the function above here: 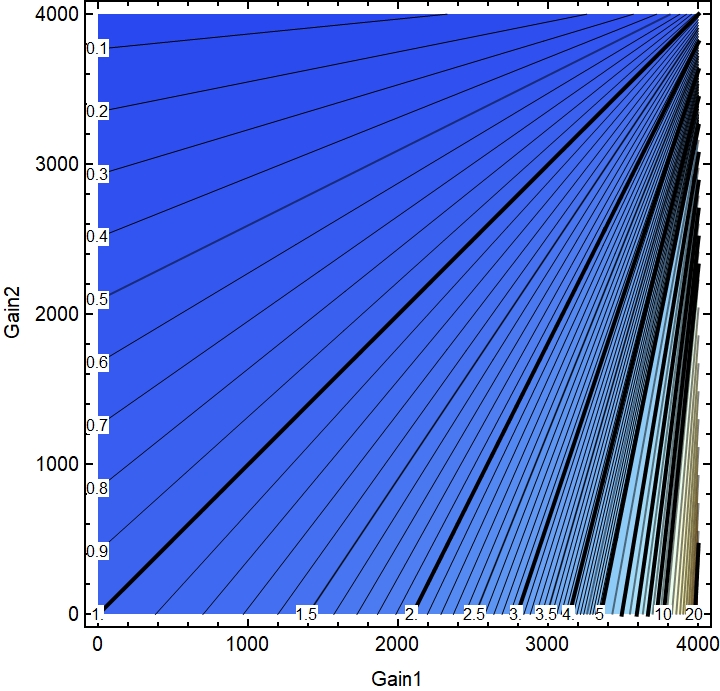 The plot graphs the ratio  t2/t1, so to get t2 you look up the ratio and multiply by t1.

This crazy formula makes little intuitive sense to me, but the QHY site seems clear that that this what is going on.
This means a QHY 128c user can scale exposure times using the formula - if you have an exposure at G1, you can get the "same" exposure at a different combination of time and exposure.
That does NOT mean the two photos will be exactly the same.   In conventional photography it is like saying you can get the "same" exposure for ISO 100 at 1/100 sec and ISO 1000 at 1/1000 sec (assuming same subject and f-stop etc).  The shot at ISO 1000 will have approximately the same pixel values, but it will have more noise, and less dynamic range than the shot at ISO 100.
Nonetheless it is useful to know the point of approximate sameness.
A good example is skyfog - i.e. brightness from the sky due to airglow and light pollution.  if you get a certain skyfog pixel value at one gain, this will let you tell you the equivalent pixel value at a different gain.

Just to flesh this out a little more.....

These numbers really don't make much sense to me - I can't figure out what QHY was thinking when they defined gain in such a strange way.