I write observation reports to share my experience. Along the way, writing it down helps me to absorb the experience and to better remember what I saw. As a bonus, As I go over the maps, I add objects to the next session's observation list.
In addition, it provides me with the understanding if my planned list was good or not. 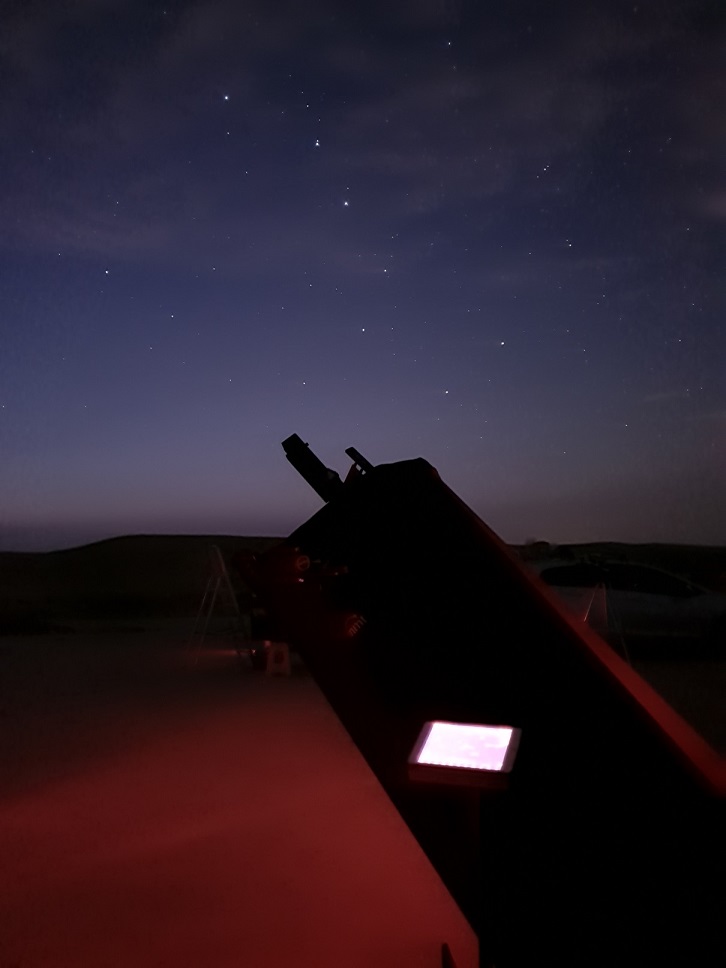 Site: Negev mountain - Israel
Telescope: NMT 20”F/3.3
Conditions: Skies dirty with dust to some extent, not the clearest of night.

My main goal in this observation - the big galaxy cluster in Andromeda. Not the Andromeda galaxy itself, this one is not a challenge to find and observe, but a group of fainter galaxies about six degrees from from the Andromeda galaxy towards the star Almach, close to the open cluster NGC 752. A month ago, I had little time to focus on that area and scanning it quickly yielded nothing.

In addition to this galaxy cluster, I have my longer run target of marking all Messier catalog’s objects. I know I observed them all, but as I try to work in an orderly fashion, I want to put a stamp over each and every one of them. I have 12 of them left in my todo list and I try to observe them as they become available. This time I had M55 & M74 available for me.

M11 was another object I wanted to observe from this site. I observed it from my Bortle 8 backyard with my 102mm refractor just a few days earlier and wanted to view it again from a dark location with a big scope.
And as the double cluster in Perseus is available, I never miss a chance to observe it.

As usual, my list contained a lot of targets, but the night was short (moon rise at 00:40) so I decided to dive in as soon as I could.

The North East was a bit cloudy early on, so I started with the center of the Milky Way where M55 was the first to be found. It is a big cluster, but fainter compared to M13, a very nice view and its stars resolved nicely. Only 11 objects left for my Messier completion.

A bit above it, right from Saturn I found M75 and below Ascella I found M54. Excellent start for this night and it’s not even 21:00.

At this point, few guests arrived and we did a bit of a break. Their host went through the scopes on site, we had only 5 that night, and when they came to my spot, I focused on Saturn - an object that always gets a gasp from first timers - and it did just that

. It was very sharp and few of its moons were visible nicely around it. The guests went away, and I went back to my plan.

Next object - M11, the Wild Duck Cluster. OK, comparison with what I saw from my backyard with the small scope is stupid - from this location, with this scope that cluster is a totally different thing - like a pile of very fine jams, with a recession in its center and a sea of stars surrounding it. The DSS image from SkySafari is not doing justice to the view through the eyepiece 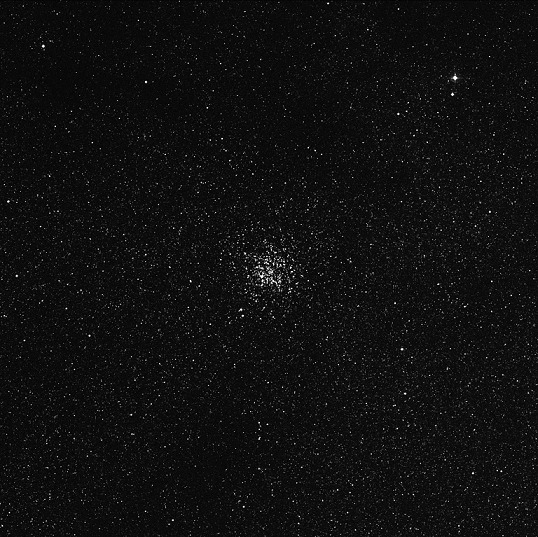 The clouds on the North East went away, and I did not have any more southern items on my list, it was time to turn the scope towards Cassiopeia.
There I visited the Owl/ET Cluster, another object that is fun to observe and through the telescope it looked like it was flying left and up.

As I was already in the area, I pointed the scope up and right by about three degrees to observe the Pacman nebula. It is a big nebula, but a bit faint. From a glance it’s easy to overlook it as it captures the entire FOV and its shape and border are not too clear. I found it but to get a better view I took out my DGM NPB filter. The nebula was emphasized dramatically, revealing its shape nicely. In these DSS I tried to show the difference between a filtered and unfiltered view. My image editing skills are lacking and the “filtered” image shows the stars better - a thing that is not happening with a filter, but the nebula is more distinct.
Here again, the view through the scope wins over the DSS image - even the edited one. 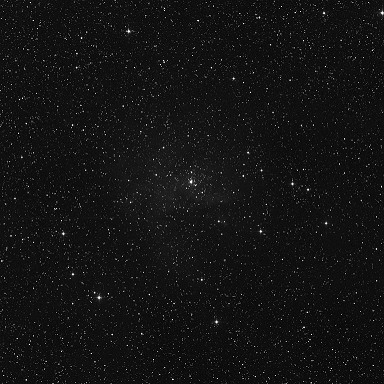 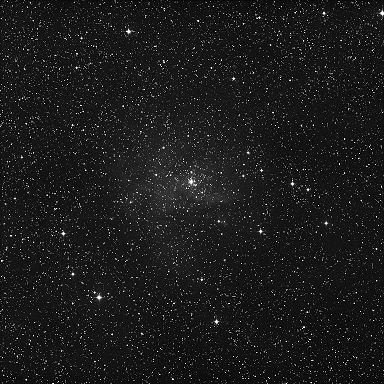 Before diving into Andromeda’s galaxy group, I took the time to observe Mirach’s Ghost. The Star Mirach is in the Andromeda group and beyond the fact that its a double star, it has an elliptical galaxy as a companion - its Ghost. I observed them two months earlier, and took a view yet again. Lovely view.

Dive into a galaxy cluster.
As this cluster contains lots of galaxies, I marked two relatively bright ones as anchors for the others - NGC 708 Mag 12.7 and NGC 687 Mag 12.5.
This night, with the dusty skies, was not the best of nights for a galaxy hunt, but as there were only a few people on site, I could concentrate on the task at hand.

My dive into the galaxy cluster started with NGC 752, by itself a fine open cluster. On its left side (scope view) there are two bright starts by the catchy names of 56 And & HR 556. NGC 708 is located about 1.5 degrees to the left of HR 556, wider than my widest FOV of the Nagler 31.
From HR 556 I jumped to HR 552 and from there to a pair of close stars.
Last steps were done using Ethos 21 to see fainter stars. Next hop was to SAO 55072 and then TYC 319-0745-1. Finally I could imagine I could see something faint lurking where I expected to see... something faint 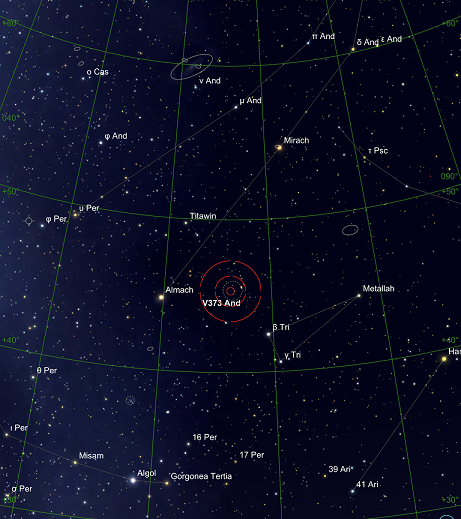 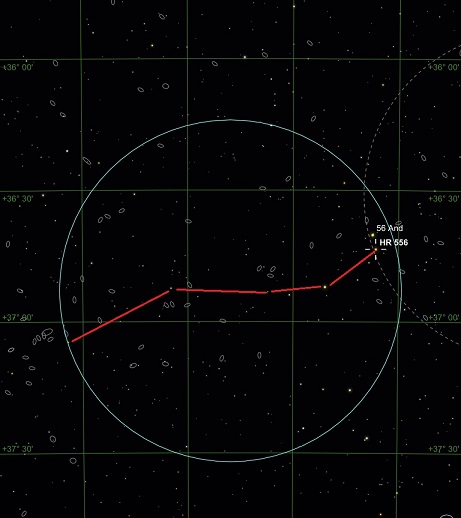 It was time to push the magnification further and I used my 14mm 82degrees. Indeed, not only a single fuzzy thing, but three! I replaced it with my Ethos 8mm and the fun began.
NGC 708 was visible immediately and it acts as a tip of a triangle in which NGC 703 is below and a bit to the right and the third tip is NGC 704 is on the left. The bad conditions manifested themselves clearly as NGC 708 should have been visible even with much lower magnification, but hay, I am not complaining. On the contrary, I see faint galaxies! Time to put on my earphones and take a tour using the spaceship of Black Sabbath Zeitgeist.

NGC 705, a spiral galaxy that looks as if connected to NGC 708, I started to see as I moved the scope carefully and used averted vision. After locating it the first time, no averted vision was required.

To the right side of this lovely triangle, above the star TYC 319-0745-1, I could, after more careful observation, locate NGC 709, a Mag 14.2 galaxy - the faintest object of this evening.
Above NGC 709, almost in a straight line, I saw a fuzzy stripe and above it another one - two spiral galaxies - NGC 717 & NGC 714. All the above galaxies are visible in the FOV of the 8mm eyepiece. 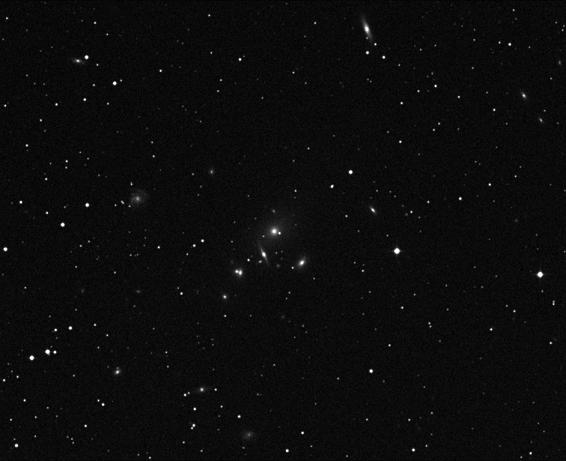 At this point, I changed the music from Black Sabbath to Pink Floyd Animals and kept on diving, star hopping using the 8mm eyepiece and found another triangle of galaxies - UGC1344, UGC 1350 and UGC 1347. 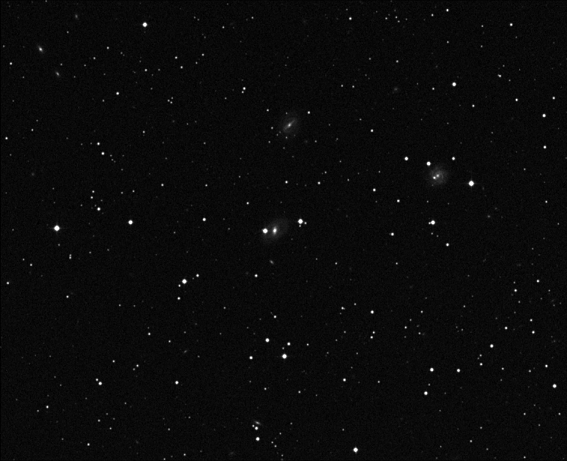 Eventually, I found and marked 14 galaxies in this area. I am sure that with better conditions I will find many more and intend on doing so in my next session.

From this point, I continued at a more leisurely pace.
Almach which I encountered an hour ago is a very lovely double star. I went back to it again. The contrast between the two stars - the big orange one and the smaller blue one is striking. It was nice to observe.

Dumbbell Nebula was excellent, the shape of two parts connected together by a narrower part was nicely visible, especially when using a filter.
Along the way I got M74 - 10 objects left on Messier.

My DSO grand finale was the double cluster in Perseus. Here the light gathering capacity of the scope and the wide FOV of the Nagler 31mm provide a striking image. A must object.

The night was concluded with Mars. The air stabilized and we viewed it first using a 16”F/5 tracking scope. A slower scope with tracking is just perfect for planets and allows observation in very high magnifications without any effort (only a ladder was required). We viewed it via the eyepiece and it was amazing. Never have I thought that I would see so many details on Mars - the ice cap with its borders are very sharp and the border between the dark and the lighter part, interacting and merging with one another.
And then we placed a binoviewer, a Denk, and the view at higher magnification was even better! Given time, it was possible to sit there with a map and mark surface features.
The NMT also provided an excellent view using the 8mm Ethos. Without tracking, I did not went to higher magnification.

The moon rose and called the session to a halt.
It was a wonderful end to an excellent session.

I had probably never looked really hard at M11 until last month's trip to a good dark part of Texas when I spent the better part of a half hour enjoying teasing out the really fine stars in between the major ones with the 16". It is, as you say, a fine object to enjoy.

Fine session you had there. Thanks for posting your experience and list.

The most fun I've had in a month was reading this report.  Thanks.  I really like Mirach's Ghost which I've not appreciated until now.  Also, how much you like that Ethos 8mm.  I just bought one but haven't tried it out yet because of smoke, clouds, moon and you name it.

The most fun I've had in a month was reading this report.  Thanks.  I really like Mirach's Ghost which I've not appreciated until now.  Also, how much you like that Ethos 8mm.  I just bought one but haven't tried it out yet because of smoke, clouds, moon and you name it.

The Ethos 8mm really surprised me. I use it to dive into DSOs more than I ever thought I will.

the Image is crisp and the FOV is just excellent for this kind of magnification. I totally love it.

In addition, it is my favorite eyepiece for moon and planets observation from my backyard with my SCT.

With the right conditions, you are going to love it.

I hope the skies will clear up for you, these fires are a terrible


Also tagged with one or more of these keywords: eyepieces, observing report, charts