I got done scanning my old astrophoto slide and print film that was doable. Only one set of negatives went missing, with 2 sets damaged by a water leak. 576 exposure log entries in a spreadsheet from 1971-2002, with 309 finished images of objects; 27 and counting wide images of constellations. The many 6x7 medium format wides later. The raw scans were greater than the standard 4K at the narrow 35 film dimension at 16-bit depth. This helped in removing blemishes in the images and bring out details that a regular darkroom print did not have. The raws were put in photoshop first to remove the blemishes, do a minor color correction and curves and the vignetting brightened. The resulting 16-bit tiffs were put in Pixinsight for the remaining background fixes plus some other functions that PI does so well. Returned to PS for the final tweaking.

Some surprises found. Two frames of NGC 7331 Deer Lick Group and Stephan's Quintet (Capra's Angels). I mosaic the two to get a context background. The dim objects had a cyan cast from the film emulsion I was trying out in 1999 but the brighter stars were okay. I then overlay 2 CCD frames of these 2 galaxy groups for clarity and color. All images were done with the 18" Newtonian and at the Okie-Tex star party site 10 years apart. 35mm film images with the Olympus OM-1; CCD, SBIG ST-2000 camera.

That is awesome and respectable! How did you get the correct focus? In the film days it should be so hard to focus on a tiny focusing screen. Many respects!

Here's another one, Canis Major rising. This before I ordered the 10" telescope and a few months after I moved into the house I have now. Front yard with nothing between me and Kansas City, facing SE. The houses now across the street weren't built until 14 years later. 2 image mosaic, Olympus OM-1 camera with 50 mm F/1.8 lens. 2-13-1984 Kodacolor 400 print film. 1 minute exposure, time not recorded. 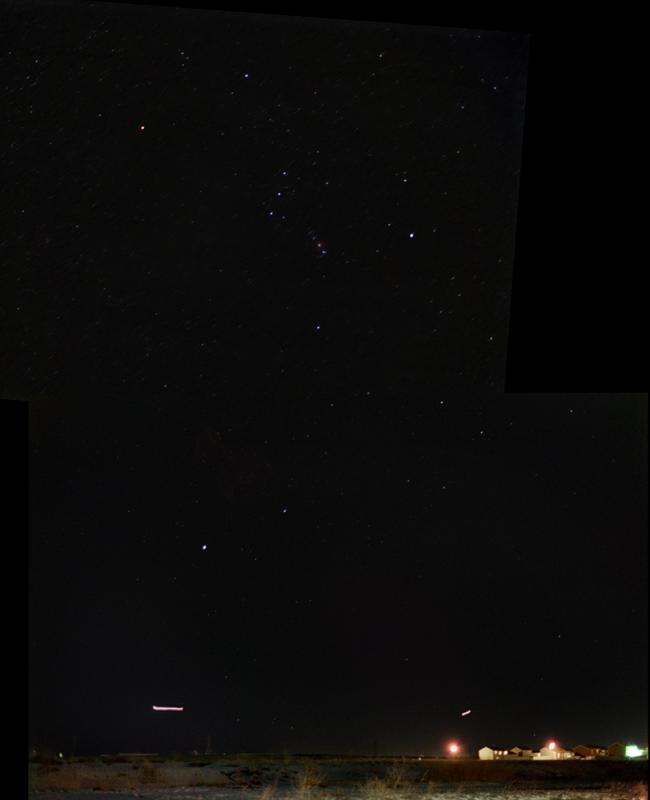