Is there an optimal length for attaching a camera directly to the OTA?

I have a CPC1100 Edge HD and a ZWO ASI224MC. I can mount this camera countless different ways directly to my scope but the easiest is to put it straight into a baader clicklock clamp https://www.baader-p...ece-clamps.html  that mounts directly to the OTA. I also have the T adapter for my scope https://www.celestro...dgehd-925-11-14 that pushes it much further out. When put directly into the clicklock mount it actually sticks into the OTA a little. I suspect this is a problem for imaging (and potentially dangerous?) but I'm not sure. Is there an optimal length it is supposed to be out of the OTA that affects imaging? It gets longer when I add the glass from the 2x Barlow as well. Am I supposed to emulate the length added by the T-adapter? It's quite long.

The optimal length is when the sensor and the focal plane coincide. Otherwise the image is out of focus.

Getting the 2 to coincide is in effect different on each make of camera.

Owing to the positioning of the camera sensor and the other use of an eyepiece the camera usually needs to have the focuser would well inwards. Say 25mm as a guess from an eyepiece setting, maybe more at times.

The scope itself adds to the "problem" if there is a lot of OTA then the focal plane will be closer to the end of the OTA. Focal plane is unchanged just someone has put a bit of aluminium is there which you can do little about. However a long OTA means a shorter focuser and I guess a focuser costs more the 15-20mm of extra Aluminium tube does.

So "optimal" is fixed - it is only when the sensor and focal plane coincide. Just getting them to coincide means determining all the assorted length the assorted bits add in. And if they add in too much you never get it to work. Seems Nikon DSLR's are just a bit longer then others and so can cause problems. Their extra flange distance brings them close to the possible maximum's.

Treat the camera just like an eyepiece. The moving mirror in an SCT provides a very wide range of focus.

An SCT by contrast is focused by moving the primary mirror. Moving the mirror moves the focal point, giving you a variable focus to accommodate using a diagonal or removing he diagonal and putting the EP or camera directly into the visual  back, or putting a second focuser between the VB and the camera or EP. That means that you can put your camera directly into the VB or after the diagonal.  The sensor recess distance of your particular camera isn't a consideration.

If you add a reducer the situation changes because the reducer will have fixed spacing at which is provides the specified reduction.  The f/6.3 reducer for example has a working distance of about 125mm, usually the flange to focus distance. The oem reducer  was design to work with the oem 1.25" prism diagonal to provide the 125 mm back focus or flange to focus distance. Other reducers will have different design specs.

You quite often see reducers for refractors with a specified back focus of about 55mm. This goes back to film cameras to accommodate the recess to the film or latter sensor, which on DSLRs for DSLRs often meant 55mm. The reducer-flatten for a TV-85 specs 56mm +/- 4mm flange to focus distance. That is the flange of the reducer should be 56mm +/- 4mm ahead of the camera sensor.

If you used a reducer with your SCT the reducer would have a design working distance. The Celestron f/6.3 provides .63x reduction when it is about 125mm ahead of the sensor. This longer distance goes back to film camera days and assumes a 1.25" prism diagonal to provide the specified illuminated area.

Oh yes, the typical SCT reducer of about .63 works over a wide range of separation, but changing the distance changes the amount of reduction and it is easy to go too far and get some bad looking stars. In other words the Celestron f/ 6.3 at or close to the design distance gives the best image correcting some of the SCT's inherent field distortion at the same time.

I would check the manufacturer's web site or the telescope manual for the back-focus distance, and put your camera sensor there. If you don't do this, you may get distorted stars as you approach the edges of the frame. I made this mistake with my Meade LX90 ACF and got very bad results until positioned the camera per the specified back focus.

It probably matters less for planetary imaging, since in that case you probably only care about the center of the frame.

Looks like back focus distance on mine is 146mm. That's quite a long way back.

A Barlow probably complicates this too I guess, and powermate different again.

Thanks, that's the site I got the 146mm from. Celestron have a page for their SCTs and then they say 'refer to the faq page for edge HD models' but there's no such page lol.

Stuff you already know: operating your scope at its designed focal length is probably optimum, but since focusing is achieved by moving the mirror the focal length changes based upon backspacing to the camera.

You can calculate your actual operating focal length by uploading an unmodified image to astronomy.net and let it solve the image. If will tell you the actual field of view of the image.

Once you know the filed of view together with your camera's sensor size (not diagonal size but height and width) you can calculate the focal length.

Add or remove spacers until you get to the designed focal length.

I did this to tweak the spacing for my reducer/corrector.

With a bit of shuffling I was able to find the right combination of attachments and adapters to fit my barlow and filter in and have it almost exactly 146mm. 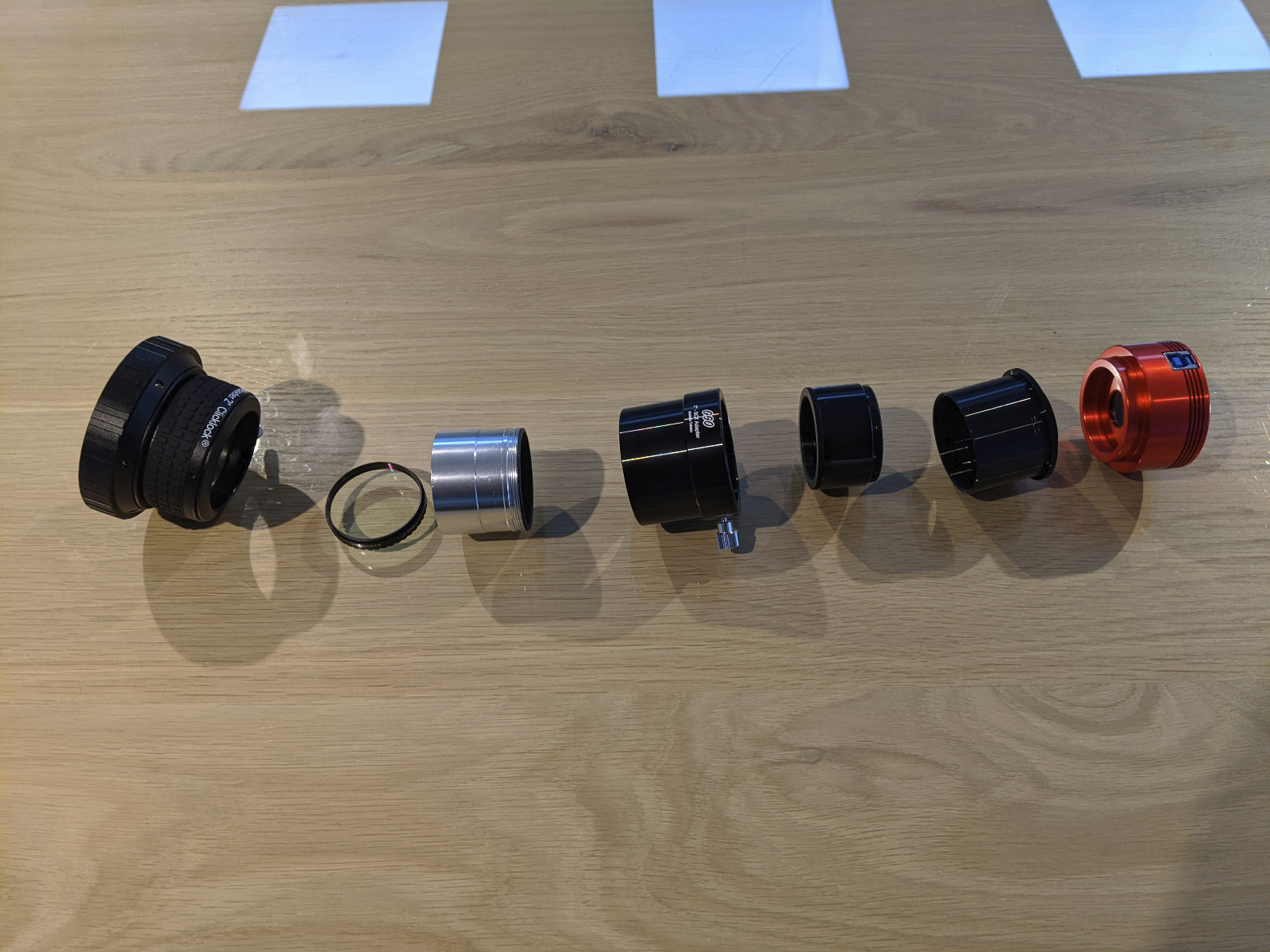 When all assembled I get 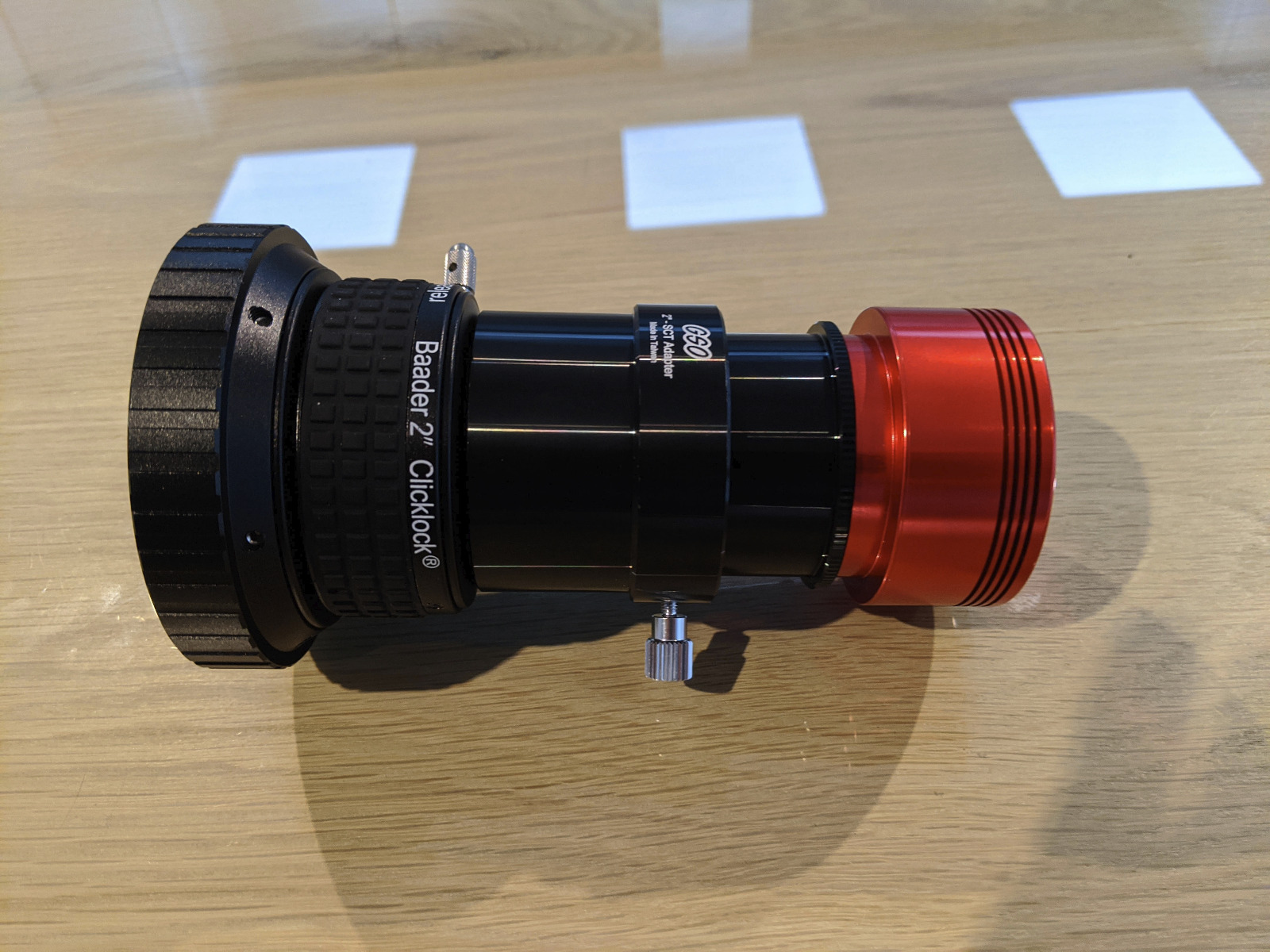 I wonder if it'll make any difference to the quality of my capture... probably not (yet?) given I still have to master the basics.

A barlow will complicate the situation since the magnification factor you get will depend upon the barlow to sensor spacing which is not the same thing as the 146mm backfocus recommendation for your EdgeHD. In addition to the variation you will get in the magnification some barlows are designed to work best at a given spacing between the barlow and the sensor which will likely not fall at that 146mm recommendation.

So, what you need to do (if using a barlow) is to determine what magnification factor you want from said barlow and then in keeping with any recommendation on the barlow to sensor spacing fix that barlow to sensor spacing and then position said barlow so that you achieve focus at the same mirror positions on the EdgeHD as given when the system is NOT equipped with the barlow and at the 146mm backfocus recommendation for the EdgeHD.

Basically, what you need to do is satisfy both the target barlow to sensor spacing and the EdgeHD's mirror spacing (focus) that would normally be achieved at the 146mm backfocus setting.

That said, there is a range of spacings (different from the above) that will still provide good results but it is highly unlikely that a 146mm spacing will give you the optimum results when using a barlow on the EdgeHD.

Here is an example when using a barlow with a recommended 55mm spacing between the barlow and the camera's sensor. That 55mm barlow spacing may come about either from a target magnification factor (say 2X) and/or a design requirement for the barlow.

1.) Fix that 55mm spacing between the barlow and the camera's sensor.

2.) Focus the EdgeHD so that there is 146mm between the rear baffle on the EdgeHD and the camera's sensor (when NOT using the barlow). This will place the mirrors in the EdgeHD at the system's optimum location (there is some leeway here, so don't obsess over a few millimeters).

3.) Determine the spacing that is needed between the rear baffle on the EdgeHD and the barlow so that the system remains in focus at the same mirror spacings as given in step 2.

Step 3 is the "hard" part and it may require some experimentation, although you can use the magnification factor of the barlow to help determine what part of the 146mm backfocus spacing will be needed between the rear baffle on the EdgeHD and the barlow itself (given that in the above example you know that you'll have 55mm of spacing between the barlow and the camera's sensor).

Note also that barlows differ and as one example note that the barlow to camera sensor spacing for the Astro-Physics Advanced Convertible barlow at a 2X magnification is 90mm (this would be the spacing shown in step #1 above, substitute for the 55mm).

Finally, there is leeway here so don't get hung up on a few millimeters. Plus, you'll probably get okay results with just about any spacing (within reason, don't be "off" by 50mm).

Here is another post that I made concerning barlow use on a EdgeHD. This includes a diagram which may help.

My head hurts after digesting that information. I went looking and there's no information on the barlow I currently own :<  Well that's to be expected since it's a cheapy. I've ordered a 2x powermate but there's a worldwide shortage and huge back order delay on that but I'll probably only invest the time in getting that one working optimally. It's my understanding it's not supposed to change optimal distance significantly since they are nearly parfocal and not really barlows.

Look at the link I provided in my previous update, it has a diagram which may help explain a barlow's effect on the spacing.

Many barlows will work fine at a 55mm spacing (between the barlow and the camera's sensor), but they may not produce the specified magnification factor at that distance. However, you can determine the magnification yourself with some measurements taken from one of your images (a double star like Epsion Lyrae -- the famous double-double in the constellation Lyra -- will give you a convenient way to measure the effective focal length of your system).

Plus, 55mm is kind of an arbitrary value (picked simply because that is a common spacing produce with a DSLR's T-thread adapter). So, for a generic barlow you can probably use whatever is produced when the barlow is mounted to your camera (that may be 35mm, or 50mm, or 70mm, or whatever). However, that final spacing will likely change the magnification factor of the barlow (so, when imaging a so-called 2X barlow may NOT produce 2X).

As for the Powemates, they still have a spacing between the barlow and camera and some of them change magnification with spacing. So, in terms of backfocus on the EdgeHD they behave just like any other barlow.

After spending some time trying to understand all this information, and paying particular attention to:

It's clear to me that with my planetary imaging camera of 4.8x3.6mm that it really doesn't matter that much. The larger the sensor area, the more critical the distance becomes, but with a very small area sensor, since off-axis is so small, the (spot diameter / diffraction limited spot diameter) is affected very little. So while I should vaguely get near the optimal distance, I should worry about other issues much more.