NGC 3953 is a barred spiral galaxy in the constellation of Ursa Major, discovered by William Herschel in 1789. Some sources suggest that it was first observed by Mechain in 1781, along with NGC 3992, and reported to Messier, without realizing he had observed two different galaxies. Messier recorded one object in private notes as M109, but did not include it in the published catalog. In 1953, notable astronomer Owen Gingerich confirmed the M109 object was NGC 3992, and added it to the "official" Messier catalog. Consequently, NGC 3953 can sometimes be found under the identifier M109B.
http://www.messier.s...rg/m/m109b.html

NGC 3953 has a small, very bright active nucleus powered by an accreting central supermassive black hole. It displays an inner ring structure probably formed by gravitational interaction between the nuclear bar and the spiral disk complex. The spiral arms are tightly wound and well organized, showing no evidence of recent tidal interactions or mergers. A number of prominent blue regions are OB Associations, large clusters of massive, hot, but short-lived O and B spectral type stars, which indicate an ongoing phase of new star formation.

On large scales, NGC 3953 is a member of the Ursa Major Galaxy Cloud, dominated by M109.
http://www.atlasofth...algrps/uma.html

Apparent properties of the galaxy are listed in the attached table. Properties derived from the redshift and from the mean of 33 redshift-independent distances indicate that the galaxy lies at a distance of roughly 50 million light years, that it is receding at 1,049 km/s, and that it is very similar to the Milky Way in diameter and luminosity

A number of small galaxies lie in the background, most of which have no identifier. 2MASX J11534596 is another galaxy similar in size and luminosity to the Milky Way, and gives an idea of how our galaxy might appear at a distance of 1.3 billion light years.

At the very treshold of the limiting magnitude is quasar QSO J115258.8. Its photons we are presently recording travelled about 10.4 billion years to reach us. At that time, the quasar was receding from us at 239,000 km/s (relativistic radial velocity). At the present time, its distance is 16.9 billion light years (proper = comoving distance), and it is receding at superluminal 365,250 km/s (proper recession velocity). Since it is now moving away from us faster than the speed of light, it presently lies beyond the cosmic event horizon, and the light it is now emitting can never reach us. 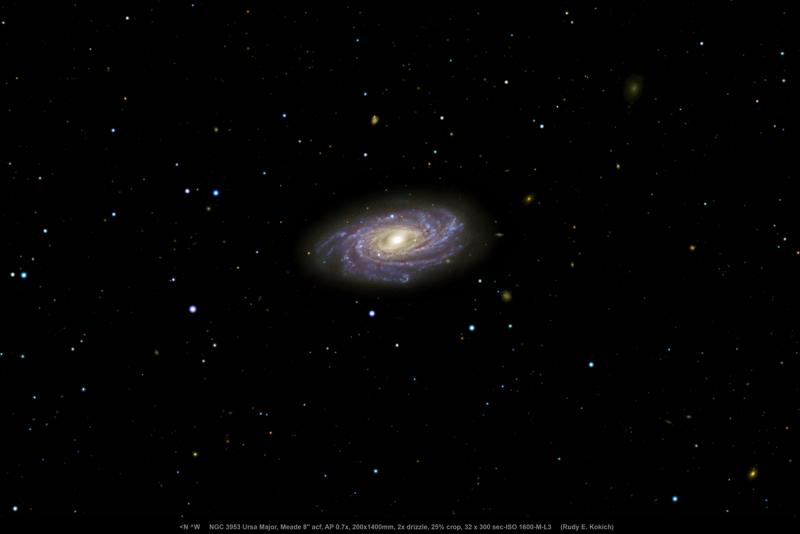 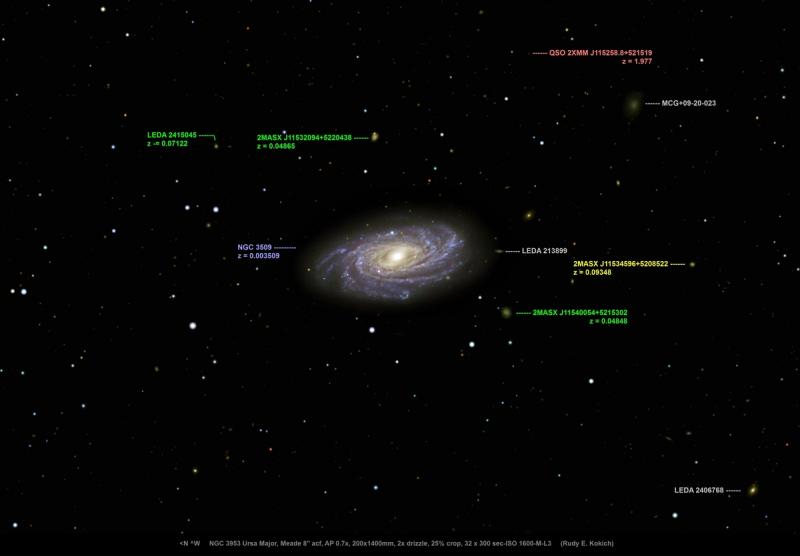 Absolutely superb image, especially with that equipment. I also use an iEQ30 Pro mount and you've given me a lot of encouragement to try longer focal lengths with it.