I had long meant to try to image the moons of Mars, but terrible weather during the 2018 opposition took my mind off it. Last night, Phobos was directly in front of Mars, but Deimos was located close to the apsa to Mars' right. I knew that glare would be the source of the challenge, so my first thought was to image it in blue, and that proved to be quite easy, so I followed it up with green and red, and produced the following image of Deimos to the right of overexposed Mars. At least one other dim star is visible elsewhere in the image.

Tomorrow, Phobos and Deimos will both be in relatively favorable positions, so I will try to capture the whole Mars system at once. Phobos will undoubtedly be harder to separate from the glare of Mars, but I don't see a show stopping obstacle to doing so. 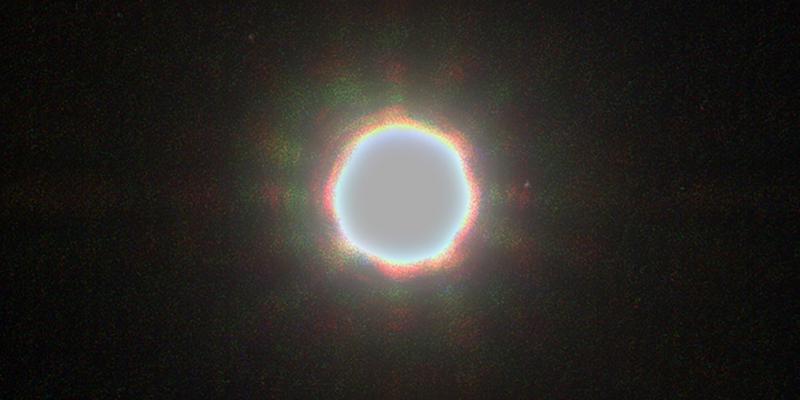 Phobos moves very fast – 8 hour orbital period. I timed my photo to capture Phobos at the apsa of its orbit, which also happened to occur with the martian system near culmination. I also performed an unsharp mask operation in Photoshop: I copied the image as a layer over itself, gaussian-blurred it at a radius of 12 pixels, and subtracted from from the original image at an opacity of 96%. Then cranked up the brightness of the resulting image to get this. I was pleasantly surprised to see Phobos and Deimos both, quite easily, with Phobos even brighter than Deimos.

I have other images yet to process to show the moons in motion, in color, and with Mars at a non-glare level of illumination, but the basic mission to capture Phobos and Deimos in the same image was accomplished! 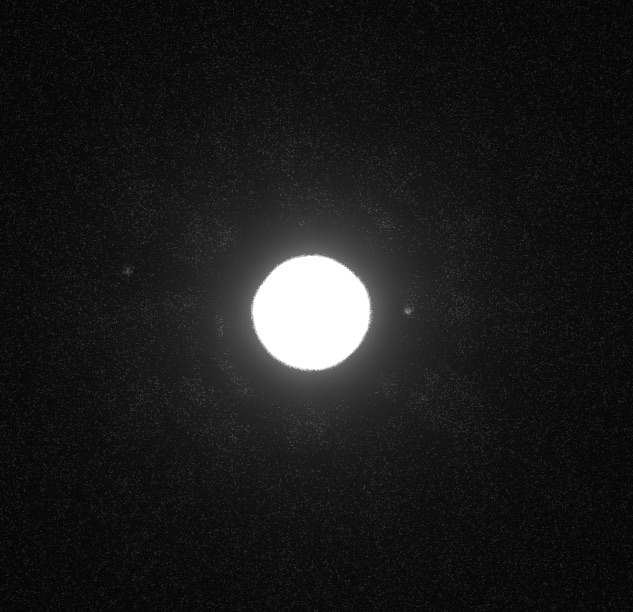 This is the first time I have seen both moons in a Mars image.  Fine work and thanks for sharing!

I like the idea of using a blue filter, will try.  Great shot!

1) The colorized version of the Phobos and Deimos shot with a color photo of Mars taken at the same time at much shorter exposure time and lower gain.

2) The blue filter shot of Phobos and Deimos animated with another shot taken 30 minutes later. Again, Mars inserted from a non-glare image. You can also see Mars rotate.

Phobos appears to one side or the other of Mars every 4 hours so the opportunities to capture a picture like this come around pretty often – even twice in one night would be possible!

The moons just make for a few pixels in the image, but they really add something, I think, to the scene. Mars isn't just a globe but a system. 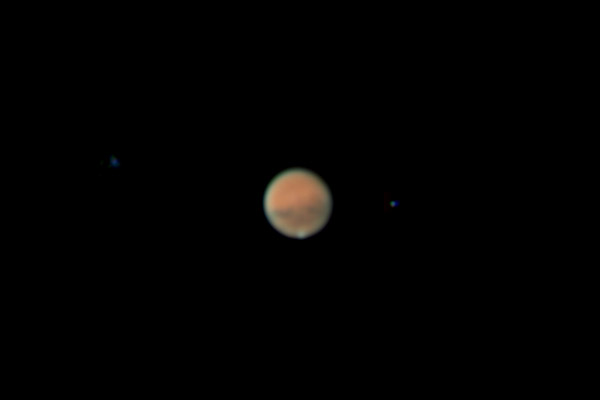 Inspirational work!   I have been waiting quite a while for seeing to steady a bit to give this a go.  Where is the most convenient source to get the moon orbital data from?

I've been using the Solar System Simulator at JPL:

The only snag is that the moons are so small they appear almost as pixels in renders of Mars. To figure out what Phobos was doing on a given night, I just chose Phobos as the object to center upon, then iterated times one hour apart, saving the jpgs to my computer, and Mars appears to move around Phobos.

This is the first time I have seen both moons in a Mars image.  Fine work and thanks for sharing!

It's funny, but now that I think of it, it may be the first time I've ever seen both of them in the same image, ever, including from spacecraft. Perhaps I'm wrong and it just slips my mind.