Nice evening for planet observations, it was partly cloudy, 84°F ( 29°C),with average seeing and below average transparency due to high altitude smoke from distant fires. The central meridian of Mars at the time of sketching was between 50 -60 degrees. Mars was very bright ( visual magnitude -2.4) and its angular size was nearly 22 seconds of arc. The phase of Mars was nearly 98% illuminated.
Features seen included the south polar cap, Argyre I, Mare Erythraeum, Aurorae Sinus, Nectar and Melas Lacus and the ‘location’ of Valles Mariner is between them. Solis Lacus was well over to the following limb. To the north some of Niliacus Lacus could be seen and the bright haze near the north polar region.
I ended up sketching without a filter but I used an assortment of color filters, a polarizing, and a neodymium filter to increase contrast when I began observing. 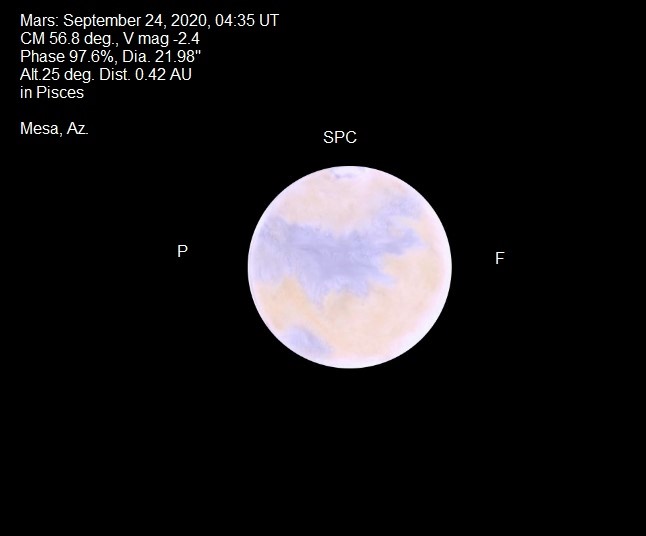 Thanks for your remarks on my Mars sketch.

Mars September 28  2020 04:00 UT
This was another fine evening for observing and sketching Mars.
Transparency was above average seeing was about average temperature was 86 degrees.
The SPC was nicely visible and the following limb was under clouds and or haze
as was the north polar region. Sinus Sabeaus and Sinus Meidiani were easily seen and so were Margantifer Sinus, Oxia Palus and Niliacus Lacus. To improve contrast and reduce brightness I
used a Neodymium and Skyglow filter and a polarizing filter.

Scope used 16” f/4.41 Dobsonian telescope with an 6mm eyepiece and filters named above for
a magnification of 299x. riding on an equatorial platform 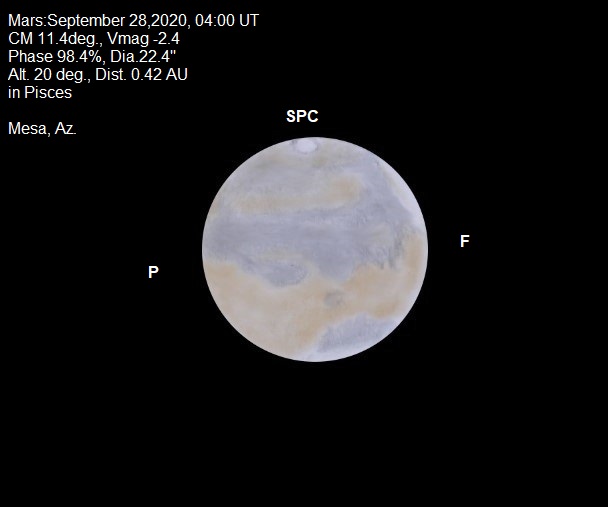 I really like mottled representation of Mars surface textures. It is very truthful to what observer can actually see in eyepiece.

Your sketches confirm I need to stay up a little later to see Mars! I notice the colors are a little more muted in the second sketch. Is that an observation or change in technique?

The most recent sketch is the first one that I used filters to reduce the the brightness of the planet.

Mars is impressive especially in steady seeing. It probably will not top your Moon/ Sun  observing August 21, 2017 but it may be close.

Good work capturing and recording these splendid views of Mars, Frank! The second one looks just like my views with a pale blue 80A filter.

I truly most enjoy sketches and finished drawings that capture and replicate the 'eyepiece' view and impressions.You hit these 'out of the park'.

Thank you both for you nice comments on my Mars sketches. I am really enjoying the view with Mars in close.

Hi Frank.
I really like the drawing you have made of Mars. Its texture and tone contrasts are very attractive to me.
In addition, its appearance is the closest thing I have seen to my vision in the telescope.
Thanks and best regards.

Thanks, I got a slightly better view at the very end of September but I didn't post it here because it was very similar to the sketch above. It is in my gallery here.

Thank you much. I am really enjoying every clear night I can get out and observe and sketch Mars.

It's here now and we will be pulling away all too soon. This is a better go around for Mars than 2018 was

Clear skies to you,

PS: Thanks for the likes Scott and Uwe

Great sketches, I will have to observe more Mars before it runs away.

Mars: October 3, 2020
This was a very fine evening for observing and sketching the red planet. Western edge of Syrtis major visible near the preceding limb haze. Helas was not as bright a last month. Sinus Sabeaus to Sinus Meridiani were dark and easily seen as was Mare Serpentis.  Pandorae Fretum, Noachis, Margantifer Sinus and Oxia Palus were all seen as well. South polar cap remains visible but much reduced.  Haze and clouds were seen along the following limb and the North Polar Region. 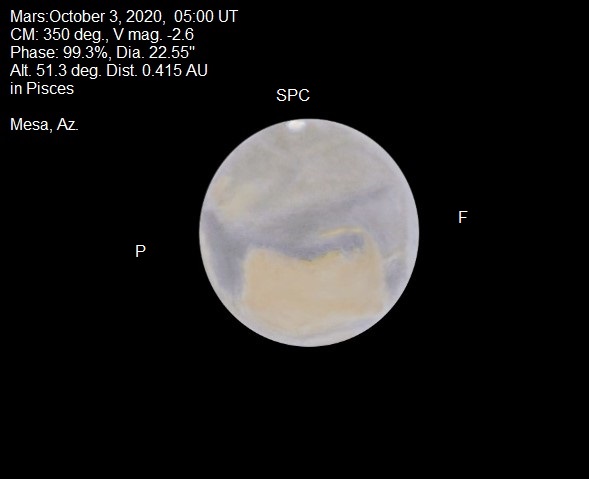 Thank you for the comment on my sketches of Mars. I am really enjoying this.

Great new Mars sketch, interesting to see how the albedo features change over the years.

Mars: October 9, 2020
Mars was beautifully visible on this night. Very bright and showing off Syrtis Major on the meridian. Seeing and transparency were both above average.
South polar cap was still visible and haze seen on the Northern, Western and Eastern limbs while I was sketching this view.
Other features seen: Unusual looking Hallas, Mare Tyrrhenum, Syritis Minor, Tritonis Sinus and Hespera, Sinus Sabeaus, Mare Serpentis, Aeria and Arabia 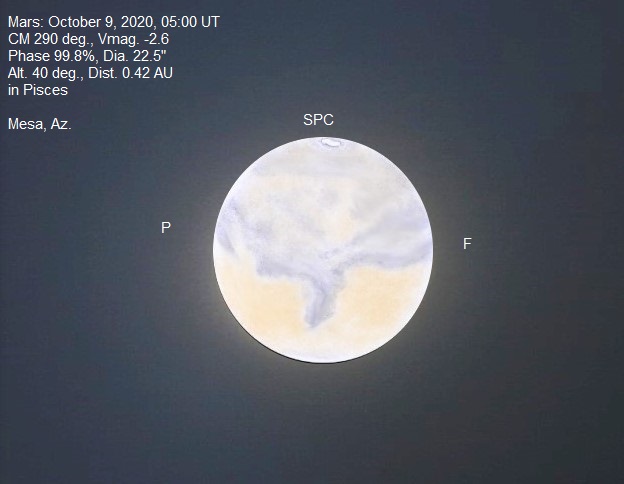 Frank, just ran across your thread. Wonderful observations. That has to be something spectacular to see. Of course, my smaller aperture does not resolve as well, but every now and then the image will tighten up a little. You captured what I can only hope to see. I cannot wait for the clouds to break. A collimated scope sitting idle is a terrible thing to waste.