observing " Sirius B " after sunrise

On September 24, I managed to see the satellite of Sirius after sunrise. I started observing him around 4 am. The atmosphere was very calm, although the height of Sirius was 16 degrees. The Sirius satellite was best seen by me through a telescope of 250 mm, at a magnification of 400 times. I have used a binoviewer. I also checked the visibility of the satellite at other magnifications and apertures. I was able to confidently see it even in a 100 mm aperture at 170x magnification. I think this is not the limit. Then the sky began to brighten, as soon the sunrise. The satellite was still perfectly visible. When the sun was 20 minutes away, the Sirius satellite was still perfectly visible through the 140mm aperture at 200x magnification. At this time, only Mars, Venus and Sirius were visible in the sky with the naked eye. The sky was very bright. I decided to wait until sunrise and continued to watch. I was able to see a few minutes after sunrise, the satellite of Sirius in an aperture of 250 mm, at a magnification of 400 times, and using a binoviewer. I was surprised that it turned out to be possible. The most strange thing is that the transparency of the sky was low, the sky was gray with a pinkish tint. The height of Sirius at this time was 19 degrees. I took some videos and photos, the satellite is perfectly visible in the photos taken during the day! 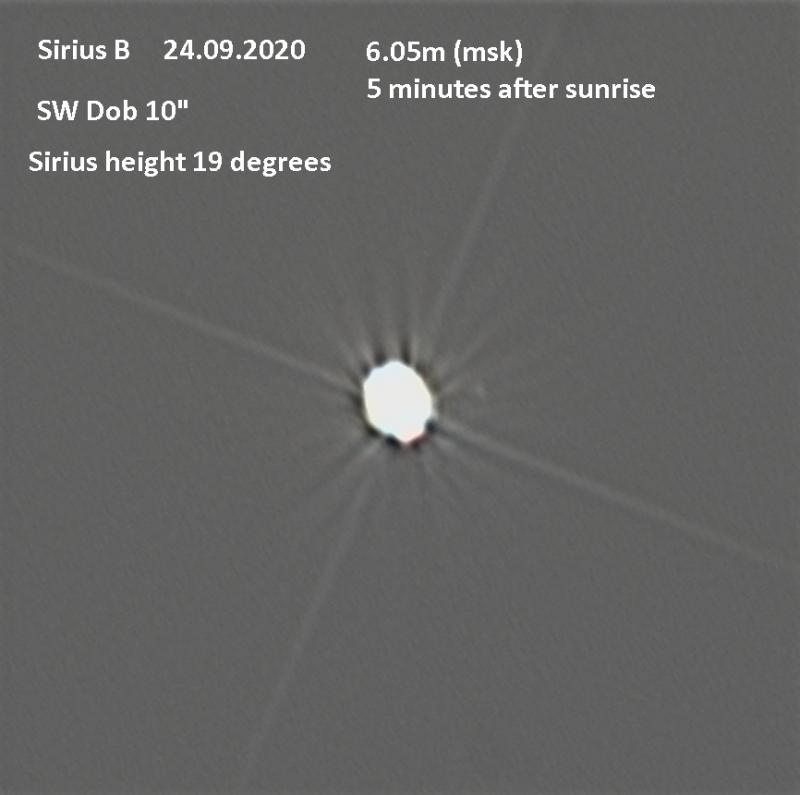 after processing, one more satellite of Sirius was identified in the daytime image. Sirius C, it has a magnitude of +12.6 and is at a distance of 64 "!!