Would you care to share any advice & your experiences?

I'm pondering the AT102ED and mount considerations for using it with binos.  I'm thinking that using my Porta / Manfrotto 475B combo with this scope & Earthwin binos might be pushing the limits.  A mount with tracking would be fantastic, goto even better, and grab'n go for the trifecta!  This would be primarily for the moon / planets / brightest DSOs and double stars.  I'll ask on the Mount forum eventually as well, figured I might as well start here.

Would you care to share any advice & your experiences?

I'm pondering the AT102ED and mount considerations for using it with binos.  I'm thinking that using my Porta / Manfrotto 475B combo with this scope & Earthwin binos might be pushing the limits.  A mount with tracking would be fantastic, goto even better, and grab'n go for the trifecta!  This would be primarily for the moon / planets / brightest DSOs and double stars.  I'll ask on the Mount forum eventually as well, figured I might as well start here.

I have that scope and you are in for a treat. In my opinion the AT102 ED scope is one of the best of its class. Over time I have gravitated from GoTo's to Alt Az mounts. My G11G is great for AP but my Losmandy AZ8 is what I view with these nights. Fast set ups and break downs and I am able to mount two scopes configured for different viewing task.the AT102ED for low power wide field views and the other for high power Solar system viewing or DSO's. My AZ8 is mounted on a Berlebach Planet tripod and is about as stable as it can be. This set up up is a stretch for a grab and go weighing in at about 50 pounds loaded. I have tried out a friends Stellarvue M2C with my AT102 ED mounted and it was plenty stable enough to enjoy viewing with it. I have one on order and the M2C should be here soon. I will use the Losmandy lite weight tripod that came with the AZ8 mount for this set up, it will weigh in around 25 pounds and that's will be my grab and go set up and a perfect set up for those quick viewing sessions at home. Both of these mounts can be moded for Digital Setting circles. Instead of GoTo, it will be a push to rig. I have found that Alt AZ manual mounts are a total pleasure to use and the slow motion knobs are second nature to me now. For viewing I prefer that now over the GoTo's, and as a bonus, I have found with great delight that The manual mounts have taught to navigate the skies so much faster because I am the one responsible for positioning the scope.. I find something gratifying when I just look up at night with just my eyes and I know where celestial artifacts are located even though I cant see them. You just learn the celestial road maps fast. Turn Left at Orion, hang a right at Ursa Major, 5° West of Altair, drawing lines in your head to and fro. Using a manual mount really helped teach me how to do this. No electronics nessessary no alignments unless you are using digital setting circles. Then it is just pointing the mount north at Polaris A star.

The choice of mounts are more important than your choice of scopes. If the mount is not stable your viewing experience will be frustrating. A cheap scope will be more enjoyable to view with on a stable mount than the most expensive scope on a unstable mount. This issue with mounts has been covered at length here on CN. In other words it is better to be over mounted than under mounted. The Stellarvue M2C is the just right mounted, not over or under mounted for the AT102ED scope. Another concideration  would be Disc Mounts DM4, or a DM6, very nice very stable but  more expensive than the M2C.  I have learned this fact on mounts the hard way myself. I will not go into what the mount failure was. I really dont want to start a fight on your topic. Mount opinions seem to cause alot fights here on CN

HAPPY SKIES TO YOU AND KEEP LOOKING UP Jethro 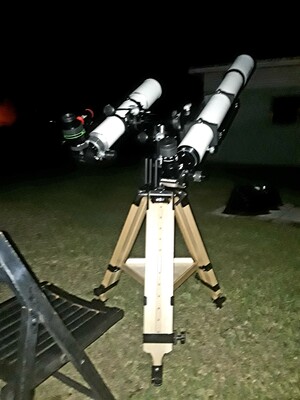 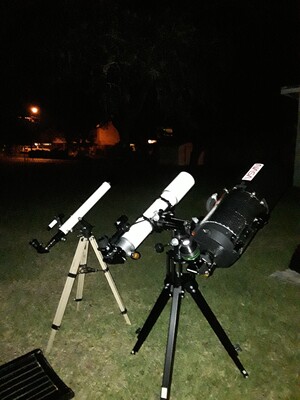 I'm currently testing out a Lunt 102mm f/7 with a Burgess24 binoviewer on a Stellarvue M2C manual AltAz mount sitting on a Velbon 830CF heavy-duty carbon-fiber photo tripod. Setup is easy, motions and controls are smooth, and the mount handles the weight without a worry on my end.

As-a-whole, while binoviewing, the setup is extremely stable with only a small-frequency, ever-so-tremulous, micro-quivering vibration noted at high powers (mostly over 150x) when the focuser end is touched or bumped.

Of note, there is almost none of this minute vibration (barely-perceptible to non-existent) without the added mass and moment arm of the binoviewer setup while monoviewing at the same magnifications. So, clearly, the binoviewing setup needs some troubleshooting and working/ironing out, my suspicion here is center-column play (extended vs. non-extended).

I'll be trying out mounting the M2C + scope on a non-center column tripod to compare the differences, but then leg-clearance while viewing near the zenith will become an issue. So I'll be curious to hear how your Manfrotto 475B fares.

As for binoviewing with the scope (the following views from a lifelong Dobsonian/Newtonian observer) this, um, "little" scope surprised me in the moon and planet views it presented! I've had the opportunity these past two weeks to check out the Lunt scope (for moon and planets) with the following EPs...13mm, 9mm and 3.5 Nagler Type 6, 7mm and 4.8mm original Naglers, 5mm, 4mm and 3mm Delites, 4mm Vite, and 3.2mm Paradigm (54.9x through 238x)...just to see where the image would/might breakdown. My "surprise" here...it never did!

Monoviewing...yes, even the diminutive 4mm Vite and the (recently-purchased just for this test) Paradigm 3.2 and the Delite 3mm provided serviceable (though, still atmospherically troubled) views of the near-culmination Mars with the Delite providing the best contrast view and darkest background of the three and Paradigm supplying a uniquely crisp planet rendition different than the Delite. (The moon, Jupiter and Saturn were too low from my northeastern skies for any satisfactory views much over 150x).

Binoviewing...the Lunt did not allow enough in-focus for non-Barlowed Burgess24 binoviewing. Using the aforementioned 9mm Naglers, along with the Burgess 1.95x Parfocal Barlow, provided fabulous ~155x views of all 4 test targets (Moon, Jupiter, Saturn, Mars) even the one's stuck down in the atmospheric soup! The previously mentioned images vibrations were noted with my Barlowed binoviewed 7mm and 4.8mm Nagler pairs (though some vibrations perceived with 9mm pairs). The binoviewed image with the 7mm's was as acceptable as the monoviewed images noted above though I'm now convinced that I need a pair of N7T6's

as their 12mm of eye-relief will provide some small relief over the 10mm eye-relief of the original Nagler 7's. The 4.8mm binoview was a, um, "bridge too far".

Not what I'm used to observing these targets with my C9.25, or my 14" Dob (read: resolution and image brightness at higher magnifications), but...surprise, surprise surprise, this, um, "little" Lunt is going to make a great gift for my daughter (for whom all of this above testing was done!

No need to break the bank - Stellarvue M2C, the mount extension / pillar and the tripod they offer.

I use this mount and extension (different tripod) with my Tak 102 NSV and binoviewers and it works like a charm.

I use my Tak 100 with f/7.4 on an iOptron AZMount pro. It has tracking and goto and is very comfy with this scope + bino.

Yeah, all the time. I have a C102, 1000mm f/9.8 and a WO BV. I replaced the stock focuser with a WO heavy duty 10:1 and it is shorter than the stock one and has enough back focus to get it in focus without needing a barlow or OCS. This way it keeps the native focal length. I rides on a Celestron Versa Go II AZ mount. If the back gets too heavy, I use a 2lb ankle weight on the front to keep it balance right.

Thanks for the input everybody!

I'm late to this but I binoview with my 115 f/7 all the time. It's mounted on a FTX v.2 using a modified Discmounts tripod.

Using an AP Barlow and Tak 7.5LE eyepieces, I can comfortably work at 50x per inch but my preference is to work with an exit pupil that's 0.6-0.7 mm. The lowest magnification I can use is about 23x with a 5 mm exit pupil (although the brightness is comparable with a 3.5 mm exit pupil.