It’s a little tough these days to get a good night of observing with rapidly changing weather conditions at higher altitudes. I gave it a shot on the evening of Sept. 11 and drove the hour & a half to the summit to meet up with a couple of HAA members. On my mind was that dreadful day in 2011 when so many died needlessly at the hands of suicidal terrorists. The last quarter moon was rising just after midnight and I wanted to get a few sketches in by then. I have a list of multiples that I want to get improved observations of and the WX prediction for the night was favorable.
I’m attaching the sketches from my Gallery with this report. The objects are all part of the AstroLeague Multiple Star Observing Program which can be found here. All sketches were rendered with a C925/CGEM on a pier at 10,000 ft. elevation at the University of Hawaii observing location.

There were three of us there that night; two others were imaging. The wind was light at about 6 M.P.H., (2.5 m/s), as we aligned our scopes; the humidity was low at 8%; the temperature comfortable at 50°F/10°C and the Jet stream was light at around 15m/s. The first object on my List to observe was STT 9, WAL 6 in Cassiopeia, WDS 00262+5647. Stelle Doppie has the Lit. here. The WAL 6 identifies the AD, AE and CD. The AC pair are considered physical and they are only 180 PC away, (580 LY). I didn’t get the AB pair, although it should be doable with most modest apertures in good conditions. I used a Tele Vue Delos 6mm EP at 392X for the sketch. I saw the primary as golden yellow/orange. All the other stars in the system were a little too dim to get colors. The E component is pretty tough as well and I got it with averted vision by slewing the scope back and forth at sidereal time. I plotted seven field stars to anchor the system in the FOV; three outside the ocular to the south and east. The object was pretty low in the east and I used no diagonal for the sketch. I spent a little over on hour on this sketch. 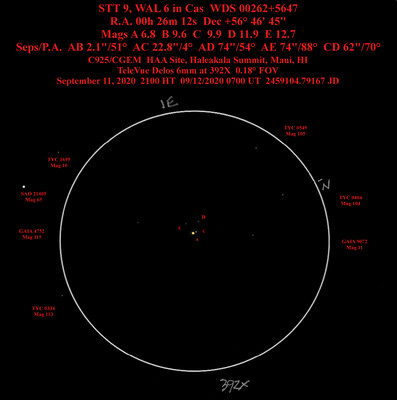 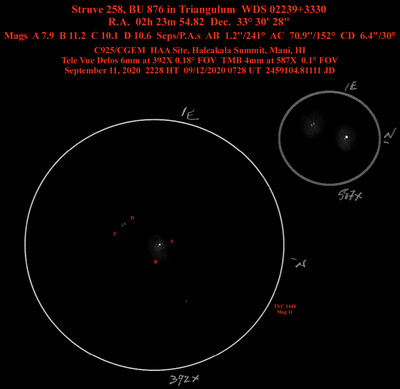 On to Atik, Zeta Per, Struve 464 in Perseus, WDS 03541+3153. Stelle Doppie has the Lit. here. This is a fantastic five star multiple that has a C component which can be a challenge for smaller optics. Stelle Doppie lists the AB and the AE pairs as physical at 230 PC, (750 LY). I observed with two different EPs; the low power view without the diagonal and the high power view with the diagonal as it was getting pretty high in the sky by now. With an Explore Scientific 9mm at 261X I plotted only two field stars; one to the NE and one just outside the FOV to the WSW. I could get the C component at Mag/ 11.2 by slewing slowly back and forth in sidereal time. With a TMB 4mm at 587X the C component popped out a little easier! 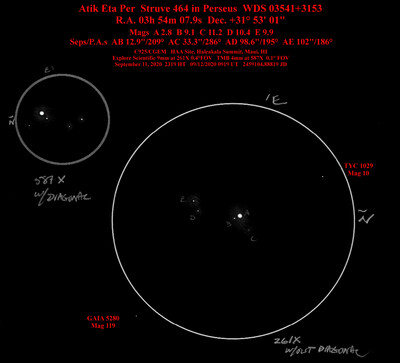 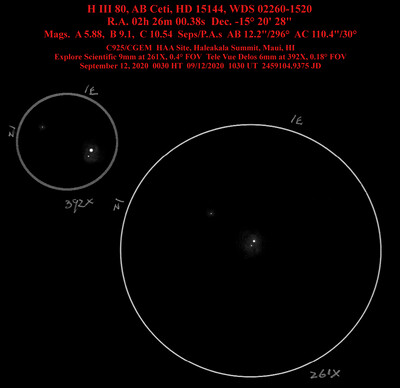 By 1:30 in the morning the conditions were still holding and I felt I was on a roll! The next object on my List was Struve 711 in Auriga, WDS 05315+5439. Stelle Doppie has the Lit. here. This trio is not very difficult amid a thin field of stars. It can be found about 8° 58' North and slightly east of Capella. With and Explore Scientific 9mm at 261X I plotted six field stars in the sketch. I isolated the trio of stars in the high power sketch with a Tele Vue Delos 6mm at 392X. The Lit. says the primary is yellow/orange and I missed that. The AB pair are deemed physical although not proven to be orbital. 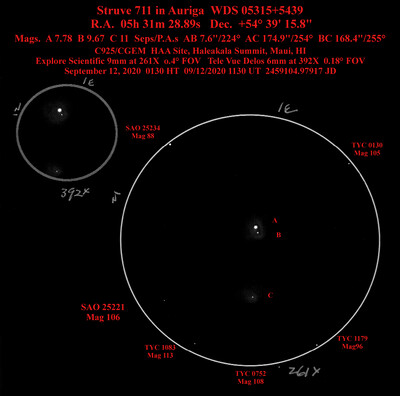 It was now 2AM and the conditions had held steady if not improved!  The last observation of the night was Struve 866 in Camelopardalis, WDS 06183+6212. Again, the AB pair are considered physical but not proven to be orbital to date. Stelle Doppie has the Lit. here. The AB pair are considered physical but not orbital. This system is also close at 14 0PC,470 LY, This nearly perfect isosceles triangle of stars has the primary at the smaller northeast corner. Don’t be fooled by the dimmer C component at Mag. 10.1 and the C component at Mag. 9.5. I used only the Explore Scientific 9mm at 261X for this sketch as I was getting pretty tired and ready to throw in the towel.  I plotted six field stars, mostly off to the west of the system with two TYC stars just outside the FOV to the west. 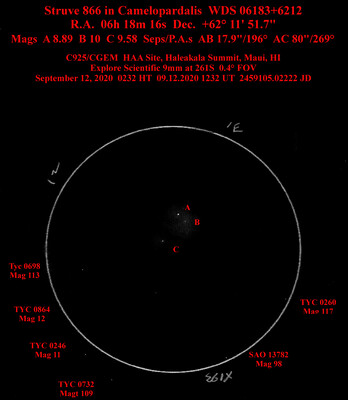 So, there you have a few observations on a night of beautiful conditions in early September, 2020 from our location here in Hawaii. If you have observed any of these, let me know and keep Looking UP,
S. McG., MauiGazer.

We'll go back up again soon!

I love making sketches!  As much as you love astrophotography!

CN is a great place to post your work.