I am involved in a project to make mosaics.   I have chosen DSLR lenses, such as Canon EF 200mm f/2 and Zeiss or Rokinon 135mm f/2 because they are both fast but also have good star image quality in the corners even wide open at f/2.   Many people also like the Sigma ART series of lenses for this type of work.

In order to make a good mosaic of an arbitrary spot in the sky it is convenient to have to have a motorized rotator.  Contrary to what you made hear, every panel in a mosaic requires a different orientation angle.   Very small mosaics, with a very narrow field of view, that have targets with low declination can be done with setting one angle per mosaic, but that is just an approximation.   If your mosaic is large (many panels) or spans a wide enough range in RA, or is high declination (which tends to force it to have a large range in RA, then the approximation fails.

A lot of the reason that people have trouble with mosaic overlap is due to this.

The reality is that every mosaic is better done with a rotation angle per panel.

Unfortunately there is a problem - the thinnest commercial rotators are models like the Pegasus Falcon, which is 18mm front to back.

The flange focal distance for a Canon EF mount is 44mm, and it expects to mount directly onto a camera.   So you can't use a Canon DSLR - any distance at all between the lens mount and the camera body will act like an extension tube and the lens will not focus at infinity.

If you have a mirrorless camera - like the Canon R5, or the Sony Alpha series, they have flange focal distance of 19 - 20 mm.

The QHY 128c, which is what I use, has a very similar "flange" focal distance with a minimum of about 18mm.

So if you have  mirrorless or QHY,  and you want to use an 18mm thick rotator, you have 44 minus 18, minus the flange focal distance, and this leaves you 6 to 8mm to play with, depending on which camera you have.

Unfortunately, a conventional Canon adapter for QHY is 10mm thick, and the connector that would attach the QHY camera to the M54 thread in the rotator is 6mm thick.   https://www.qhyccd.c...atid=193&id=115

The adapters for mirrorless cameras like Canon R5 or Sony Alpha are similarly sized.

One approach we considered was to rotate the camera and lens together.  However this approach has some issues - it would work with the Canon 200mm f/2 which has a tripod foot, but not with any of the 135mm or shorter lenses which don't have a foot.  If you (in effect) replace the tripod foot collar with a bearing so you can turn it, the lens/camera combination is not held very well.   Most field rotators for astrophotography are the "shoot through" kind and they would be hard to adapt - one would likely have to build a homemade rotator which is not as convenient as buying one.

This rotate camera-and-lens-together approach probably could be made to work, but we decided against it.

Rather than be daunted by this, my friends and I took a look and there is really no need for most of the adapter space.

We took a commercial Canon adapter from QHY, took it apart, and then in a machine shop we have access to, we sunk the  Canon mount into the Pegasus Falcon rotator.   In effect this is exactly what Canon does with the mount on a camera body - it is embedded into the body.

On the other side we remade the adapter that connects the QHY camera to the M54 mount.  There was no need for 6mm of wasted space.

Here are some photos of the final unit from the

here it is from the camera side, with the QHY camera taken off.  a baffle that hides the silver mount and lens contacts has been taken off for this picture.

In a perfect world Pegasus or other rotator manufacturers would do this - it would not be very hard.    I know that there are machine shops that cater to astrophotographers;  perhaps they could do something similar.

One addition.  The camera accessory company Really Right Stuff made a thing called the CRD - Camera Rotation Device which would let you rotate a camera and a short-ish lens.

We considered this for shorter focal length lenses but it clearly would not work well with the 200mm.

In addition there are other issues.  Unfortunately, the CRD is out of production.

There are companies like Parallax Instruments that make ring mounts that allow an entire OTA to rotate  http://www.parallaxi....com/rings.html

If you found a used CRD, or used the Parallax rings, then you would need to motorize it with a stepper motor, and have some way of encoding angle.   This seemed like a lot more hassle then buying a ready made rotator and doing machine shop surgery on it to embed the mounts.

Thank you for sharing this. This is an excellent idea. I have been looking for means to easily rotate the camera/lens combo myself for a similar project. Best I was able to find was RR-110 system by K-Astec which is not easily available. And it may not be suitable for heavy Sigma lenses I have.

I will look into your solution more closely, I don't see any reason why it won't work for me.

When you get a chance, can you please update the pictures you have posted? These are too small currently. And may be add some more. Please also share the pictures of your QHY side adapter that you custom made to connect to Pegasus rotator.

I will get better pictures tomorrow.   Here are larger pictures of the 2 posted above now. 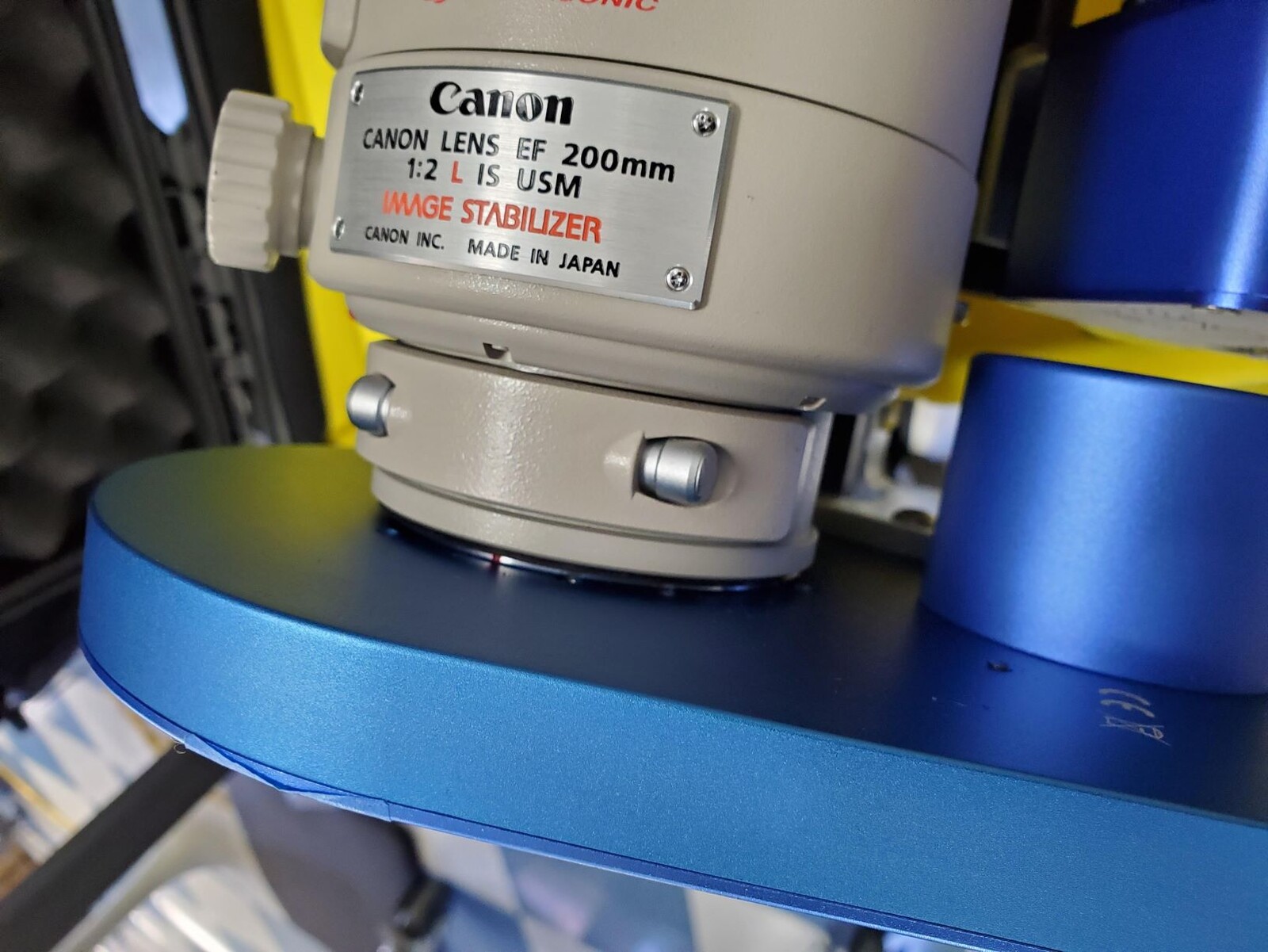 This shot lets you see how this works.

The Pegasus Falcon rotator has two M54 threaded sections, about 6mm thick.  There is roughly 6mm gap in  between the two, and that makes up the 18mm thickness.     That is the black circle in the image below.

The front section is FIXED and does not move.   The back section - show below rotates.

The rear section is not modified - it is just an M54 thread.   What is new is the adapter that goes between the QHY and the M54 thread.  I don't a photo of that handy but will post it. 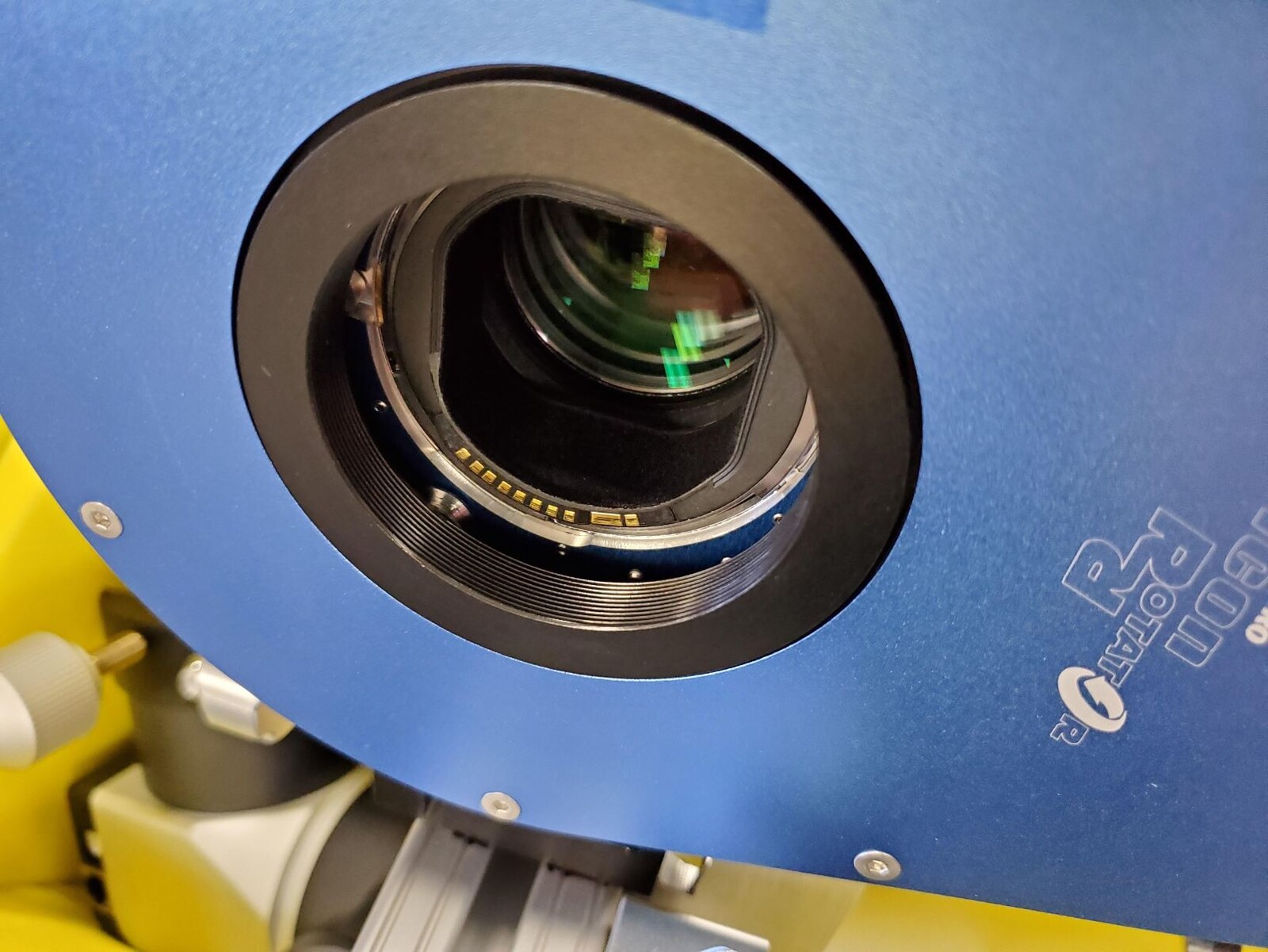 One other point.  There are Canon mounts which allow you to control the lens electronics such as http://astromechanics.org .  That one is excellent and I have used it in other projects.

But it is also bigger than a plain Canon mount, so it would be harder to use in the same manner.  In addition, I use lenses like the 135mm f/2 Zeiss that are manual focus.

So for autofocus I use a Pegasus Focus Cube 2 https://pegasusastro...ts/focuscube-2/.   This couples to the lens with a Cinema-style follow focus gear.  These gears are available for many lenses and have worked well for me.

The autofocus with NINA was excellent on the last trip

Here are pictures of the QHY camera adapter end.   We made a simple M54 male thread  with a collar that had three set screws to engage the circular dovetail on the QHY camera.    It is similar to the stock one, just a lot more space efficient.  Because we made it much thinner, this part is out of stainless steel. 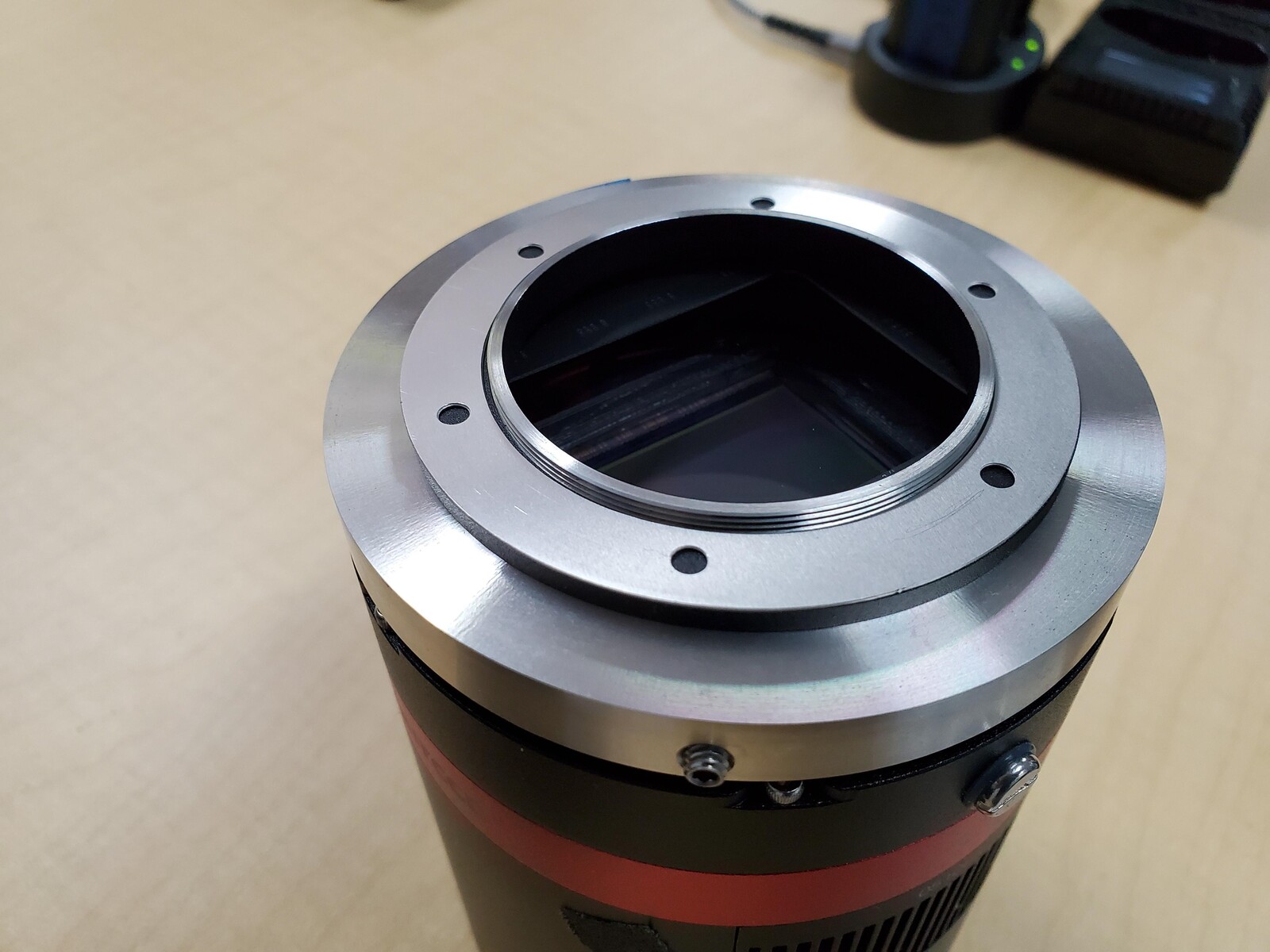 on top of the adapter there is a black and a stainless spacers/shims that came with the camera.  These are used to adjust the backfocus.

Here is a side view 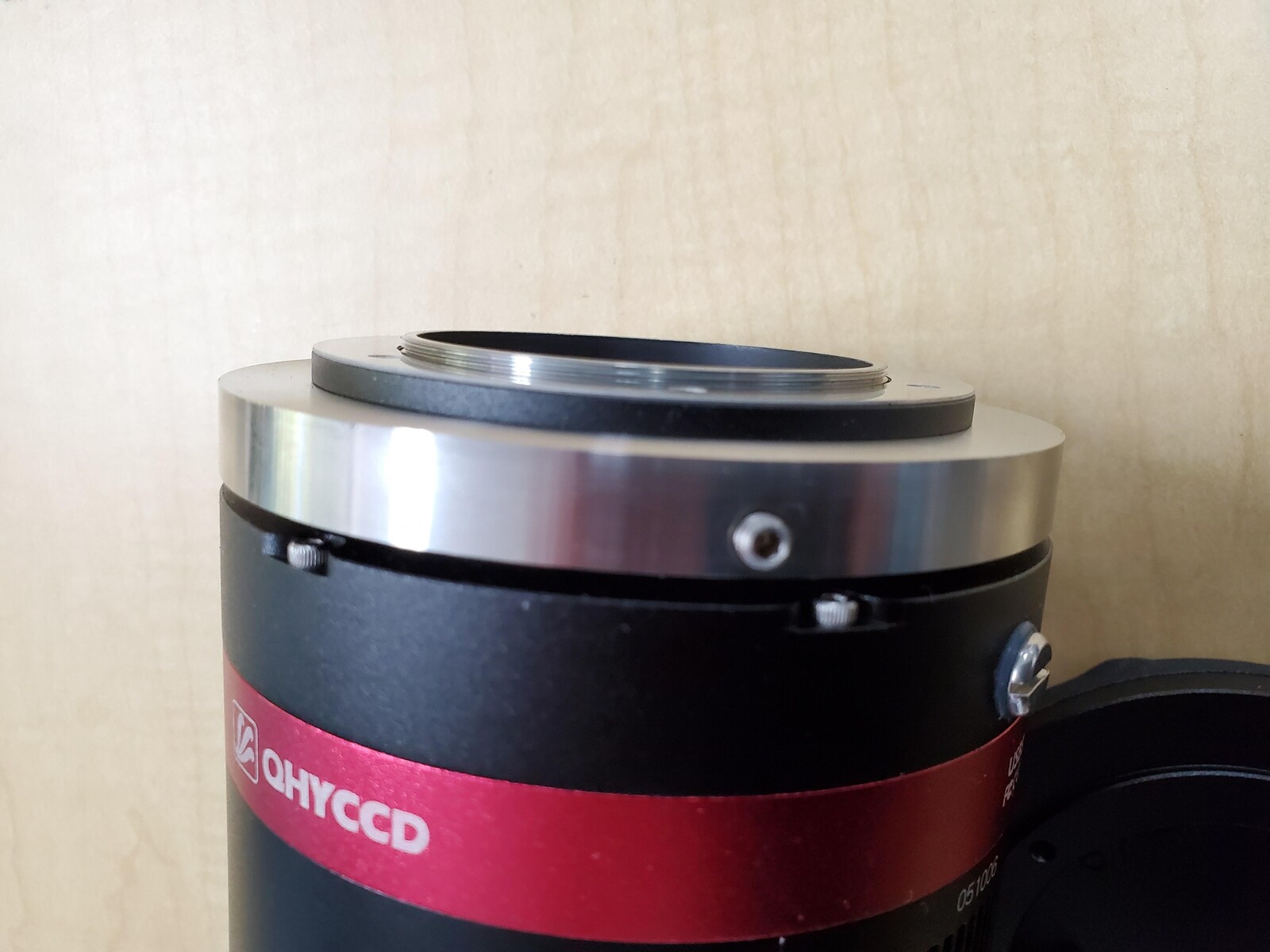 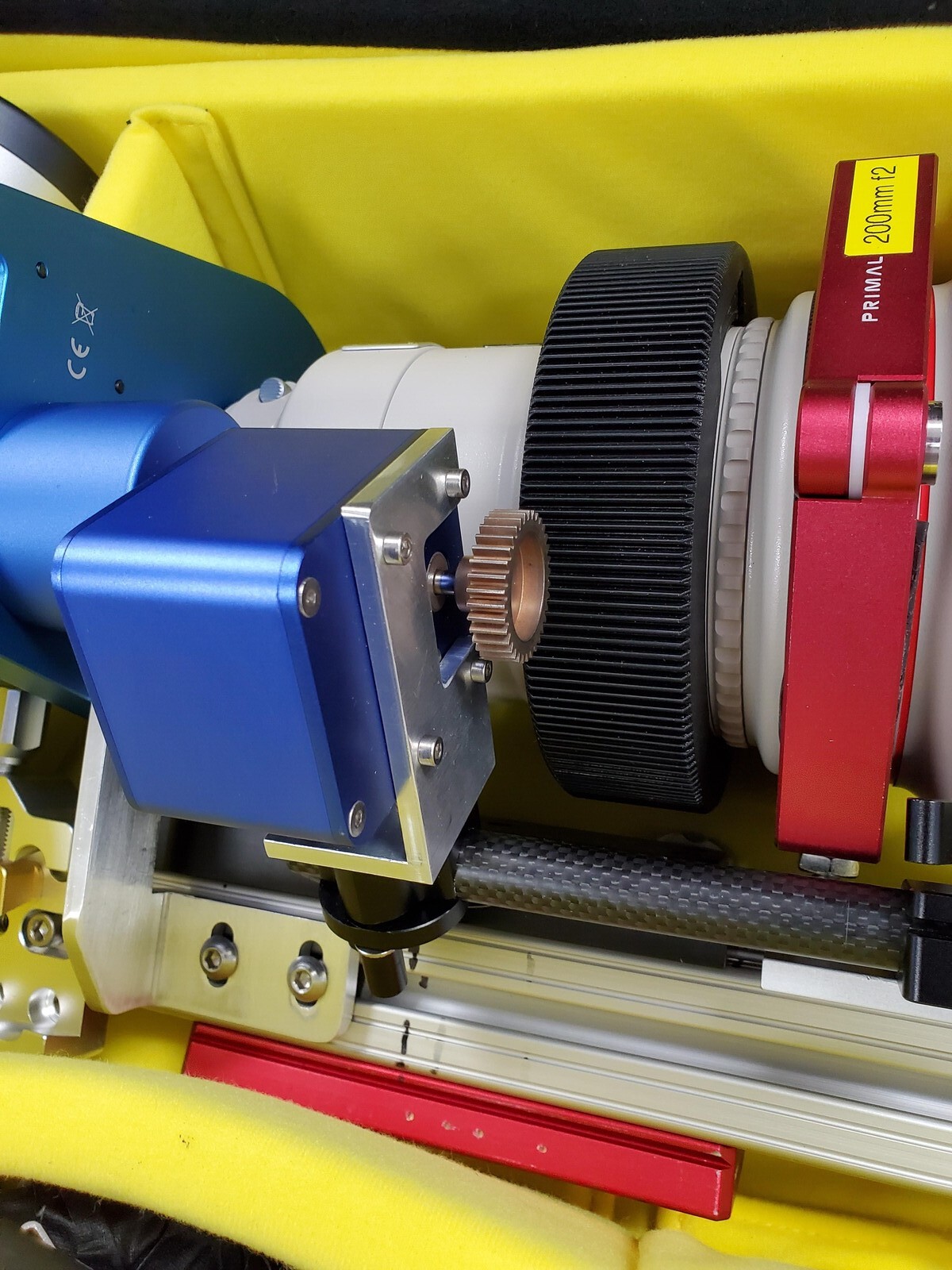 Note that the Focus Cube is connected to an aluminum bracket that we made.  That goes to 15mm rod clamp - this is a standard size rod (actually tube) used to mount accessories for Cine lenses.  I use them for a bunch of things.     The actual 15mm "rod" is a carbon fiber tube https://www.smallrig...er-rig/rod.html.

The Focus Cube motor shaft has a gear installed on it.   The large gear on the lens was purchased from a company that makes Cine follow focus gears for lenses  https://followfocusg...llections/canon .

This is very helpful, thank you for posting pictures. If you don't mind, can you please post a picture of Pegasus Falcon rotator with Canon mount inserted, but have the lens removed? I want to see how it looks from the front to get better idea.

Also, how much back focus does the custom steel QHY adapter consumes (without any additional shims)? The stock one takes 6mm. Big advantage here is that the custom adapter is now male thread that can directly plug into Falcon as opposed to female M54 stock adapter.

Lastly, are you placing any UV/IR filter in the image train? If yes, where? QHY color cameras usually have only AR window and requires UV/IR filter.

I am not currently running with any filters.  If I did decide to use some I would put them in the filter drawer of the Canon 200mm f/2, or screw on filters on the lenses.

I am sure one could also put filters inside the M54 male thread, but I have not provided for that.

I am not sure what the total backfocus consumption of the QHY adapter is - probably 1mm.   It's only a thin layer of stainless steel over the edge of the QHY circular dovetail.

QHY could easily make such an adapter - it isn't hard to do, and they could probably do it from aluminum for cost.   The current approach is very casual about wasting backfocus - both on the QHY side, and the Canon adapter side, which is why this comes up

Thanks once again. I think I have pretty good understanding on what I need to do on QHY side adapter. This is a brilliant idea to reduce the thickness and use stainless steel instead.

I am still looking for some more clarification on how Canon mount was sunk into Pegasus rotator stationary side. If you get a chance, please share those images, with lens unmounted (if that is not of too much trouble).

Here is the face of the rotator, as requested.

The silver ring is a piece of the Canon adapter - the one sold by QHY, although it seems to be a generic one manufactured by somebody else.      If you have one these and diassemble it, it becomes clear what one has to do to embed it into the black ring on the front side of the Pegasus Falcon rotator.

Note that in this picture the 6 set screws, and the 2 holes with screws from the other side were already there.

The only tricky part is the raised screw head just a little ways from 12 o'clock position.   That is the button to release the lens from the Canon bayonet mount.  It is simple in principle - but not quick to explain until you have the Canon adapter taken apart. 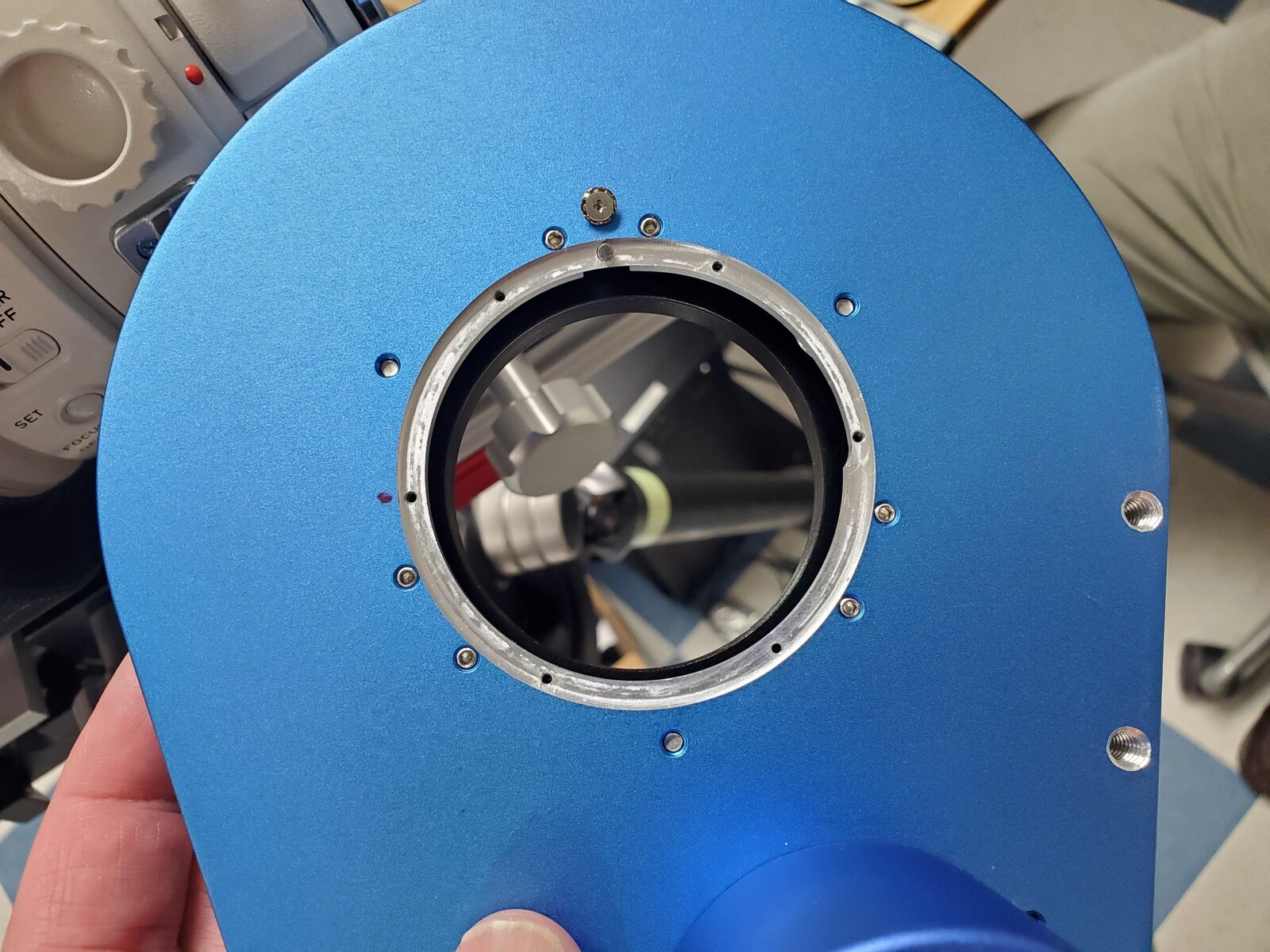 Ah, you mount it from inside. So you opened up Pegasus rotator to do that. I was thinking of mounting the Canon mount ring from outside.

this leaves me 6mm space for Canon Lens. The white ring on Canon adapters is 2mm thick. A base plate with 4mm thickness can be made, that will mount on pegasus rotator using the same 6 screw holes that you are using.

An excellent project. Thanks for sharing!

Wow, a lot of interesting solutions! I'm using the Pegasus rotator as well, very happy with it


Also tagged with one or more of these keywords: astrophotography, ccd, CMOS, dslr