A Comprehensive Field Guide To The NGC

Congratulations for the job

I agree that the inverted black and white picture might be the best for the visual observer. It also resembles more of a sketch. I actually have revisited my opinion. Having a picture for ALL objects is very helpful. Although there is not a detailed description of the visual objects and their features like in Kepple's books, the picture will help the observer to know what to expect and what to look for, at least at a glance. It's also useful that each picture depicts the field's width, so one can deduct the magnification needed.

Another point of having the picture. Sometimes galaxy nuclei are located in the field very close to a relatively bright star. In those occasions, one might be tempted to think that there's a supernova. Well, the photo will tell you more about....

Also very noteworthy is the resistance test you run. That is highly appreciated and a big plus. Dew is a continuous battle in our hobby.

Now I'm a bit more tempted to get a copy.

I'm preparing a review for our local astronomy club, so I'm not going to repeat everything from there here.  Let me preface my remarks by confessing that I am a bibliophile and other than easily replaced and relatively low cost books, no books of value are forced to suffer the interminable humidity of our Florida nights.

“Bhavesh Jivan-Kala Parekh has created an indispensable resource for those who comb the night sky in search of deep sky objects.  No other resource has the features for deep sky observers that 'A Comprehensive Field Guide to the NGC' contains.  This belongs on their table next to their favorite field star atlas.”

I'll also provide an anecdote to illustrate the value of this to me.  Recently I was observing and selected M39, an object which until then I'd never viewed.  The objective of my session was to re-align my portable mount, so I didn't have an observing plan other than, "Take the Cambridge Star Atlas and see what's cool in Cygnus and adjoining constellations."

Bingo, Don!  I'm viewing an object in one of the Summer volumes during the middle of Autumn.  I should have brought the volume to the 'Astro-Patio' (see photo below), but I didn't--only the relatively low-cost and easily replaced 'Cambridge Star Atlas'. 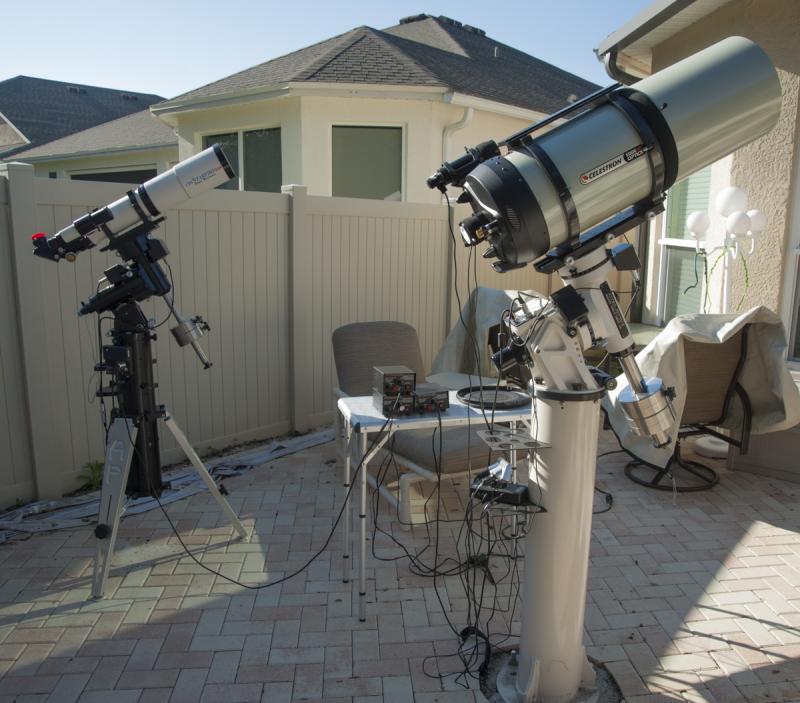 I got my mount aligned, bouncing from star-to-star to insure a good alignment, then slewed to M39 but--alas--there was no open cluster there.

OK, time to change eyepieces--let me put the Televue Panoptic 41mm in and find the cluster.  Nope, it's still not there.  Let me work through some other eyepieces, since this isn't working:  35mm, 21mm, 13mm, and finally 8mm.  Where the heck is that cluster!

OK, I'll start a slow circling routine to see how out-of-alignment my mount is.  Darn!  Still can't find that pesky M39!  Let me slew back to it and take another gander.  Nope, still not there...so I found other objects to view.

When I finished viewing, got everything battened down, covered, and stowed I went back in the house and I broke out Bhavesh's "must have" (for me) set and--voila!--there it was--M39 in all its underwhelming glory.  Little did I know that M39 isn't a typical open cluster.  I have Numazawa's work but it is not a field guide and I wouldn't think of subjecting it to a humid Florida night.

Bhavesh has done us amateur astronomers a huge favor by putting this work together.  Is it perfect?  No.  Would I like stiffer covers?  Yes.  Would I like something other than plastic coil binding?  If it were stiffer than the plastic, yes.  Would I be willing to pay the extra $50 to $100 for the set that those changes would make?  Yes, but even at the current price see how many people in this thread have said it is beyond their budget.  Those improvements would simply make the resource less accessible.

As for turning the set into a PDF or other electronic format, my best guess is that one would be looking a a file that is a gigabyte or more and would be sluggish in the best of PDF viewers.  Writing a custom app to swap in and out relevant images and information could trim the memory requirements down, but the cost of the coding would offset the savings from not having a printed volume.

Finally, I'm a tactile guy and like to annotate with pen, pencil, and little sticky notes my resources and references.  One simply cannot do that with electronic media.

Thanks again, Bhavesh, for your toil in producing such a magnificent resource!

I'm aware this thread has sat quiet for a few months, but after having received my copy last week, I'd like to chime in with my own rambling thoughts / review. Bhavesh is one of my observing buddies and I've been looking forward to getting my hands on this guide for months.

I've only been seriously observing for less than five years, but once I got past the Messier Catalogue, I went in pretty deep, and fast. Even in the Herschel 400 and Caldwell programs, I would find myself having difficulties separating a faint target from the field stars, or even knowing if I was looking in the correct place. I'm amazed I didn't get completely lost when I sat down to log the Herschel and Messier galaxies in Virgo (I actually did get lost a few times just looking for the Messier entries).

There have been more than a few occasions where I would feel so lost - more so now that I'm working on the Herschel II program - that I would perform an image search on my phone (with a proper red filter on my screen) to try to match asterisms with what I saw in the eyepiece, but it was always a gamble, not having a sense of image scale or orientation.

That is precisely where this guide will shine for me, assuming these winter cloudy nights ever pass. To be able to quickly flip to a high-contrast image of my target, WITH the orientation known, WITH an image size listed, and WITH the size of the object noted, will save me many hours of frustration to come. The last time I was out I accidentally marked NGC 1633 as one of my targets but spent at least half an hour fruitlessly searching for it, finally giving up and using the image search technique I mentioned earlier. Oh, to be able to quickly see that it's barely an arcminute in diameter and 13.5 magnitude, and just to the northwest of a field star!

Another night I spent too long second-guessing myself because I was looking for a faint galaxy near M106, but I was in that one region of the sky where the eyepiece view isn't rotated relative to an atlas - so I wasn't confident I was looking off of the correct side of M106. Had I had this guide on me, I could have quickly looked up my target and matched the field stars to my view, see I was correct, and move on much more efficiently to my next target of the night.

If I were to tackle a project such as this, I wouldn't have the slightest clue how to organize it, but Bhavesh has found the most logical way, in my opinion. There's already been some kerfuffle about constellation vs numerical, but I think this system works great. Suppose you want to spend a winter night observing faint nebulae in Orion - grab volume two (Fornax-Volans), flip through until you get to Orion (knowing that Pisces or Taurus means you've gone too far), and then find all of Orion's NGC objects in numerical order. Planning on also tackling some open clusters in Canis Major? Take volume one with you as well, and leave volumes three and four at home. You may plan on being out until Scorpius rises, but in my own experience, I can easily spend the majority of the night in only a few constellations. And if you are the type who will stay out all night plowing through that many constellations, you're probably also the type who doesn't mind hauling out some extra gear.

In addition to being organized this way, each volume contains a host of valuable information at the front. Messier, Caldwell, and Herschel 400 cross-references. A full NGC index, telling you what volume and on what page you will find an object. Even a planning table (for mid-northern latitude residents), letting you know which constellations will be best placed on the night you plan to observe, and which ones are setting first so you know not to miss them.

This book will not replace a good sky atlas, but it will complement one expertly. The atlas will serve to find your way in the sky, and this guide will serve to make sure you're at the right destination. I would say the individuals who would benefit the most from this are those serious observers who have moved beyond the Messiers and planets, and have a thirst for years of deep-sky observing.

If I were to find fault anywhere, then I would agree with the handful of folks who have said it can be a little floppy, but as with my large self-printed atlas, this only comes up when I'm moving stuff between house and car, or car and observing table. When it's just sitting on a table with a red lamp over it, it hasn't really been an issue.