Donation to our society - Dollond 3" f/13.3 refractor, tripod and case

Earlier in the summer, my local astronomical society - Orpington Astronomical Society in SE London - was offered a 3" f/13.3 scope which is very similar to one Neil English discussed in a thread on Cloudy Nights some 10 years ago:

This copy does not bear the Student mark at the focuser end as Neil’s did but otherwise looks extremely similar to the one in his old thread; there is no serial number either. The alt-az mount is the same but the tripod is made of steel.  The wrinkled paint on the OTA is black not green though.

I am in the process of restoring it as it was severely rusted but luckily the lens was in perfect condition (which I suspect to be a doublet). I’m no wood expert but I think the case is pine and not hard wood although it weighs a ton! 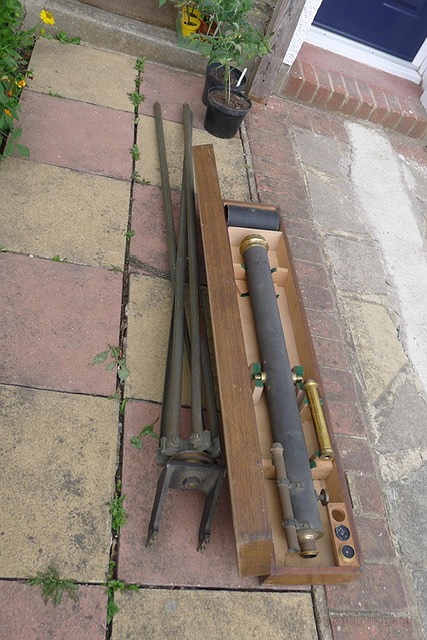 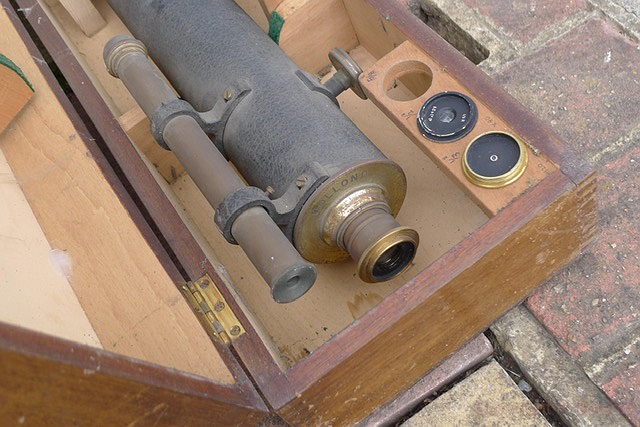 No solar filter but this scope comes with three eyepieces and what seems to be a barlow which is labelled Broadhurst Clarkson & Co so I suspect an early to mid 20th century vintage (for the barlow at least).

More pictures as I progress in the restoration process... 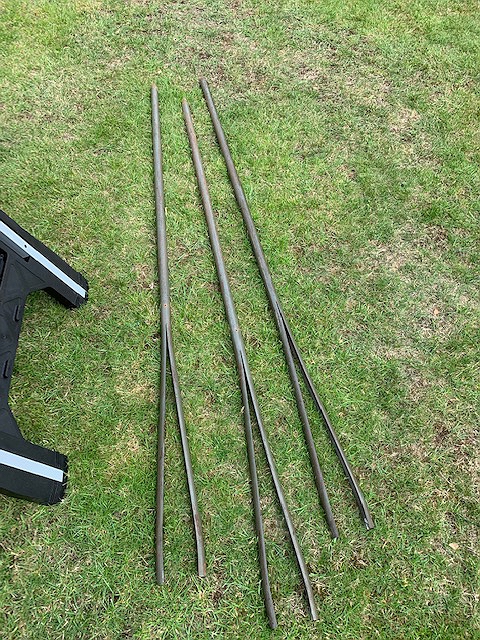 The tripod was disassembled, sanded, primed and painted satin black.  I also sanded all the brass parts to remove tarnish and pitting (which is mostly superficial).

I know many will shout - sacrilege! - at the thought of treating a classic in this way but after thoroughly cleaning it, I realised that if I didn't start removing the rust and pitting we wouldn't be able to use it much outside.

I have been using Renaissance Wax after painting the metal/sanding the brass surfaces.  I may or may not apply lacquer to the brass later; suspect not. 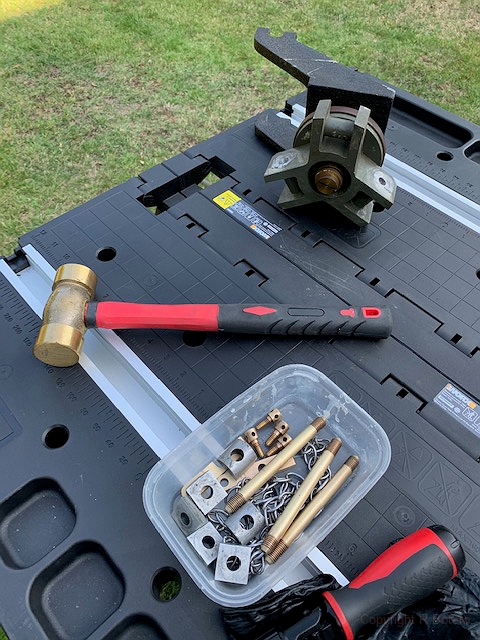 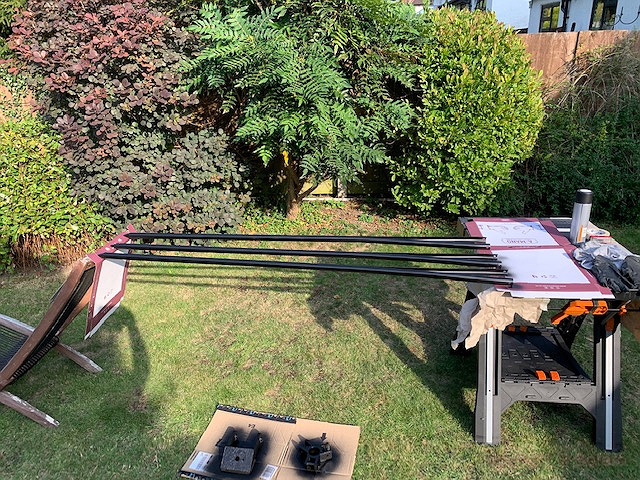 Some pictures of the OTA pre-restoration.  This is the biggest damage to the OTA.  If I can repair this tube dent after removing the focuser I'd be very pleased. 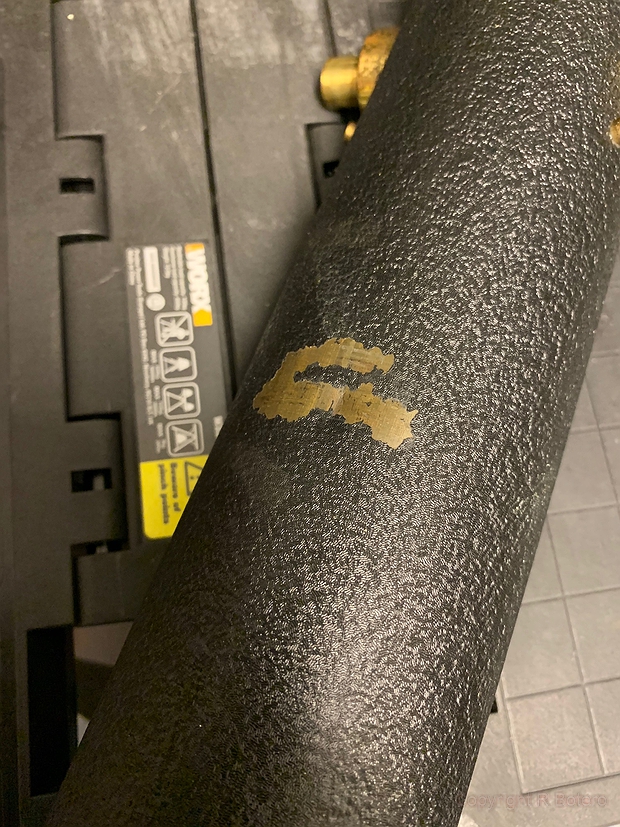 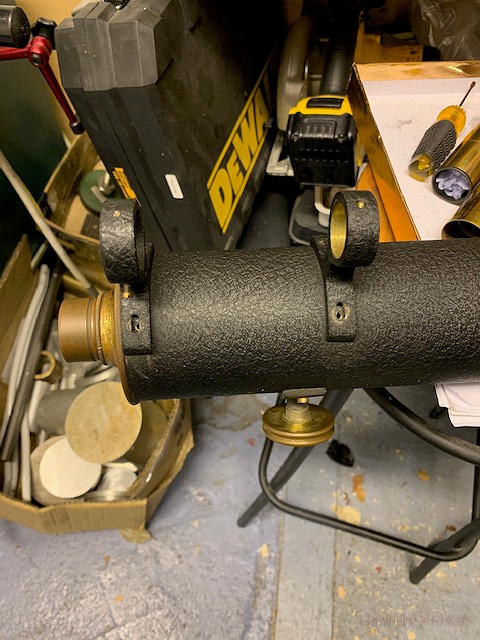 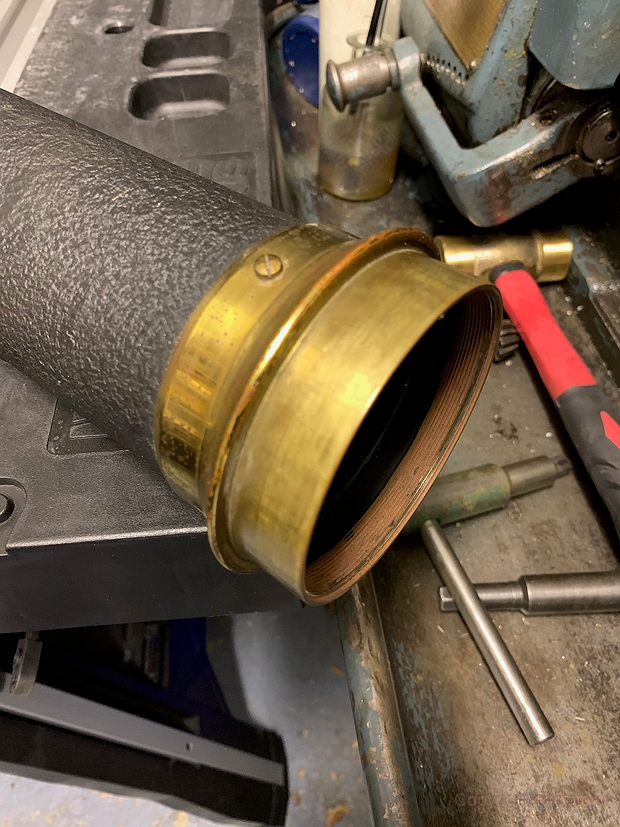 I promise I will post some images of the lens soon! 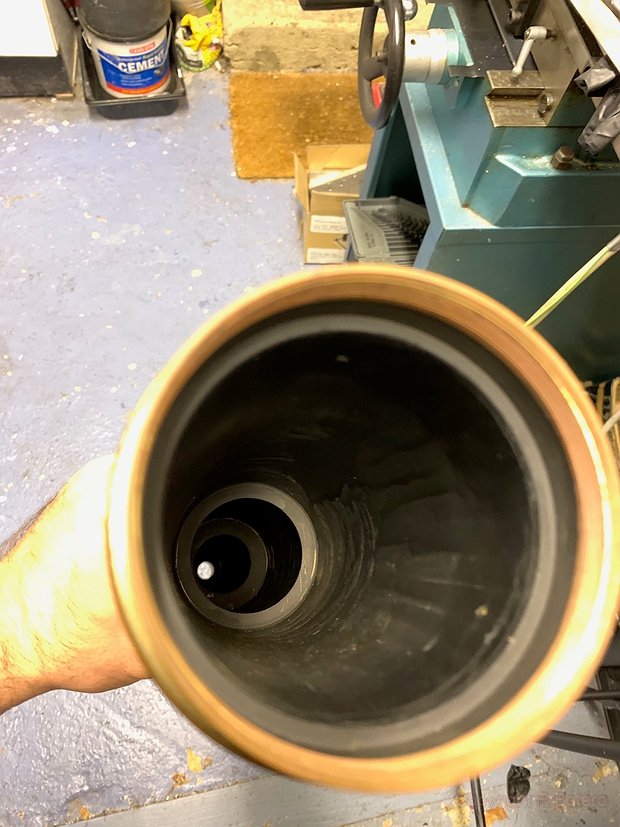 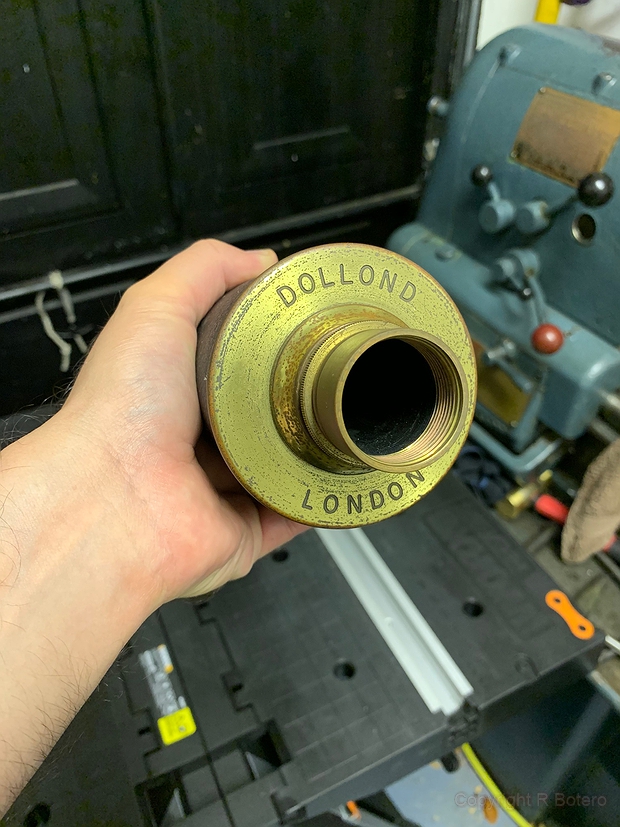 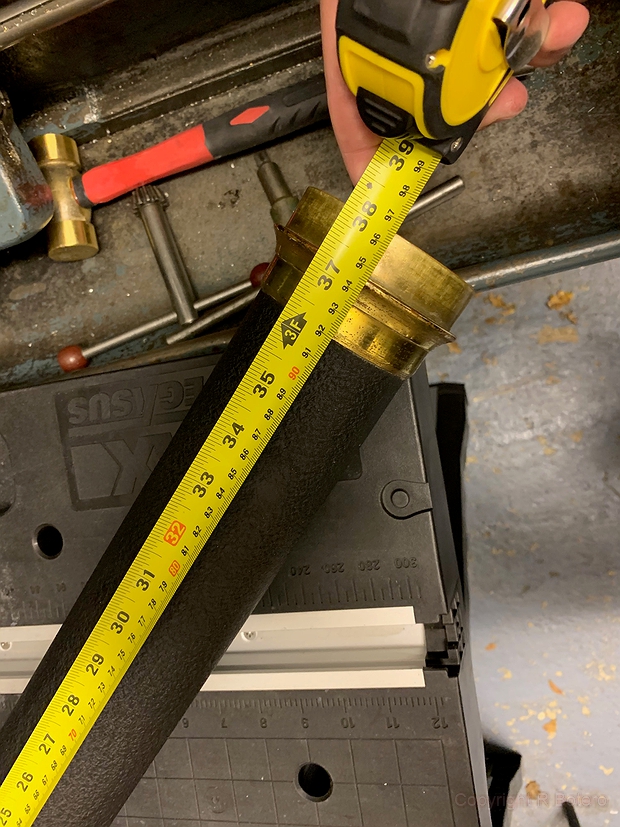 Finder and barlow after clean-up but showing tarnish and pitting: 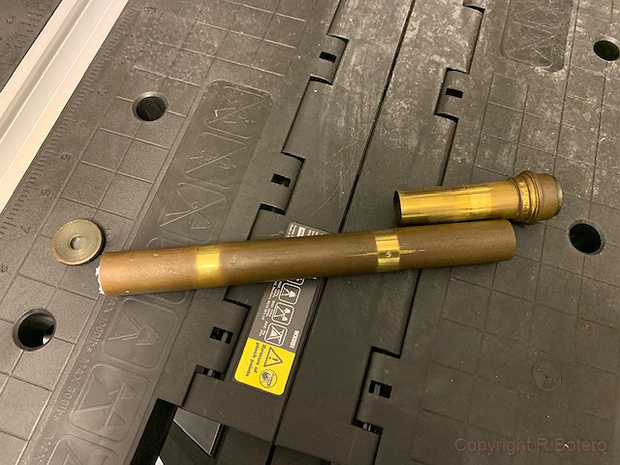 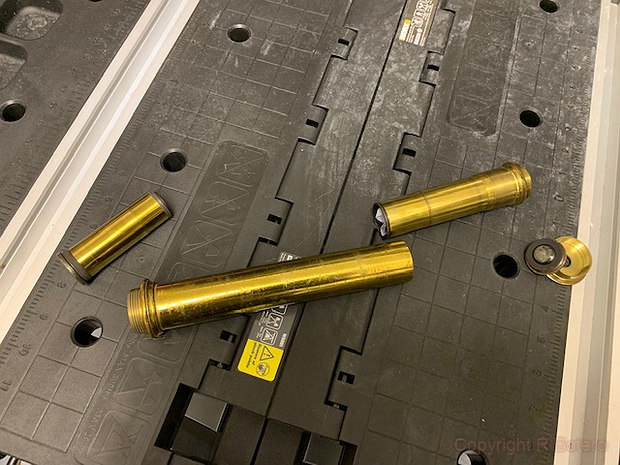 Finder and barlow after cleaning - reassembled: 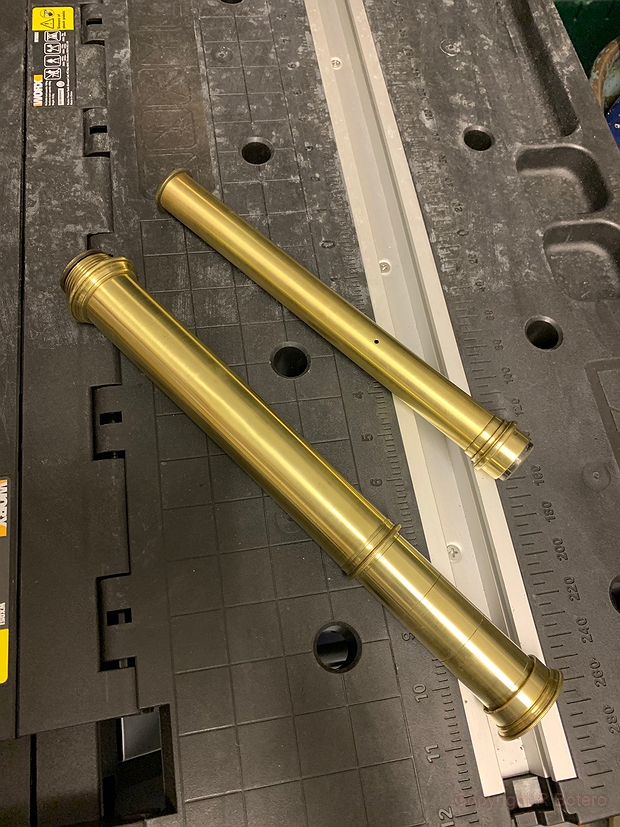 Optics throughout are in top condition!  Below is the barlow end: 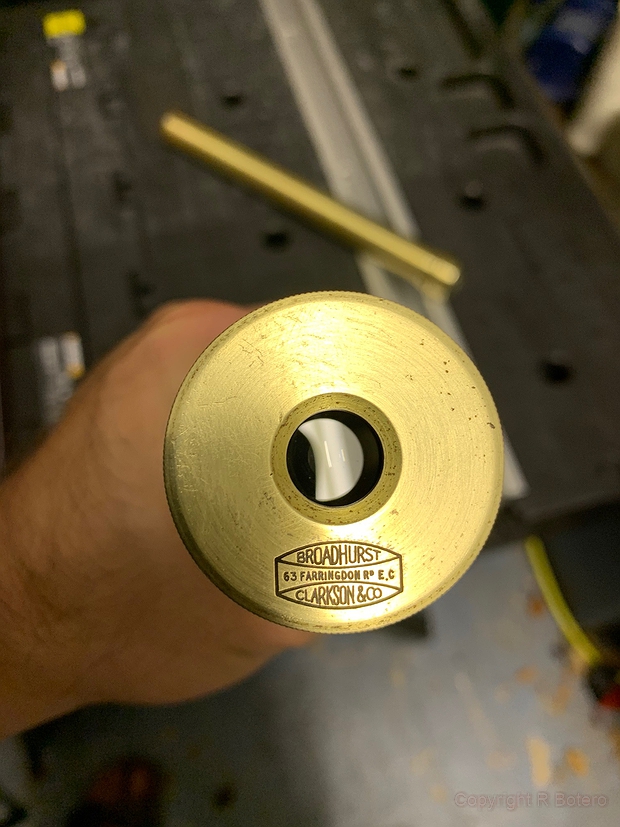 Great project!  I look forward to seeing it sometime.

No doubt Mark!  Hope to be able to bring it to our next society meeting - see you then!

No doubt Mark!  Hope to be able to bring it to our next society meeting - see you then!

That'll be post-Covid then!

I promise I will post some images of the lens soon!

I, for one, will be looking forward to the event.

I, for one, will be looking forward to the event.

I know.  I have not taken a picture of the lens yet!  I was going to last night and use a laser to figure out how many surfaces there were but it was bucketing down and I keep a laser (collimator) in the observatory and was too lazy to go out...

That's an interesting project and you're doing a good job- well done. On my screen the case looks like it maybe beech but I can't be sure. Keeping brass tarnish free is a real hassle. I'm a fan of natural finishes (metal, wood, stone, etc), brass especially and have tried different things in my own projects. The worst thing was clear lacquer. It offers some protection but still allows tarnish over time and is a real pain to remove. A while ago I contacted Mark Turner of Moonraker Telescopes fame to ask what he used on his lovely shiny scopes and he favoured renaissance wax. I keep meaning to try it but have since read that a good carnuba car wax is pretty much as good. For now I just generally polish any brass when it looks like it needs it with Brasso. I find that anything that leaves a coating behind is a lot of trouble to remove.

Thank you Martyn. I'll speak to Mark; he made me a telescope 6 years ago - it is anodised aluminium mostly though.

I got the Renaissance Wax idea from reading about it in Chris Lord's book:  http://www.brayebroo... REFRACTORS.pdf

Knowing you have a Moonraker telescope I had to look in your gallery. Moonraker produces beautiful works of art. They are just as much pleasure to look at as well as through. With the progression of online machining services I might have a go at making my own version in the future.

Thanks for the link to the pdf Roberto It's a very interesting book.

With the progression of online machining services I might have a go at making my own version in the future.

I got a lathe and learned how to use it (online) but have never got round to making one!

Mark is a top guy.  The refractor he made for me gets used every clear night as a companion for a large maksutov which I use to observe double stars.

What do you think?

Roberto as long as you can't see your reflection even the purists will be happy... :-)

Excellent Roberto - a great read of your resto!

Look forward to more of this project & the fully-completed & assembled pikkies!

A bit more progress on this project.  Cleaned the focuser and drawtubes: 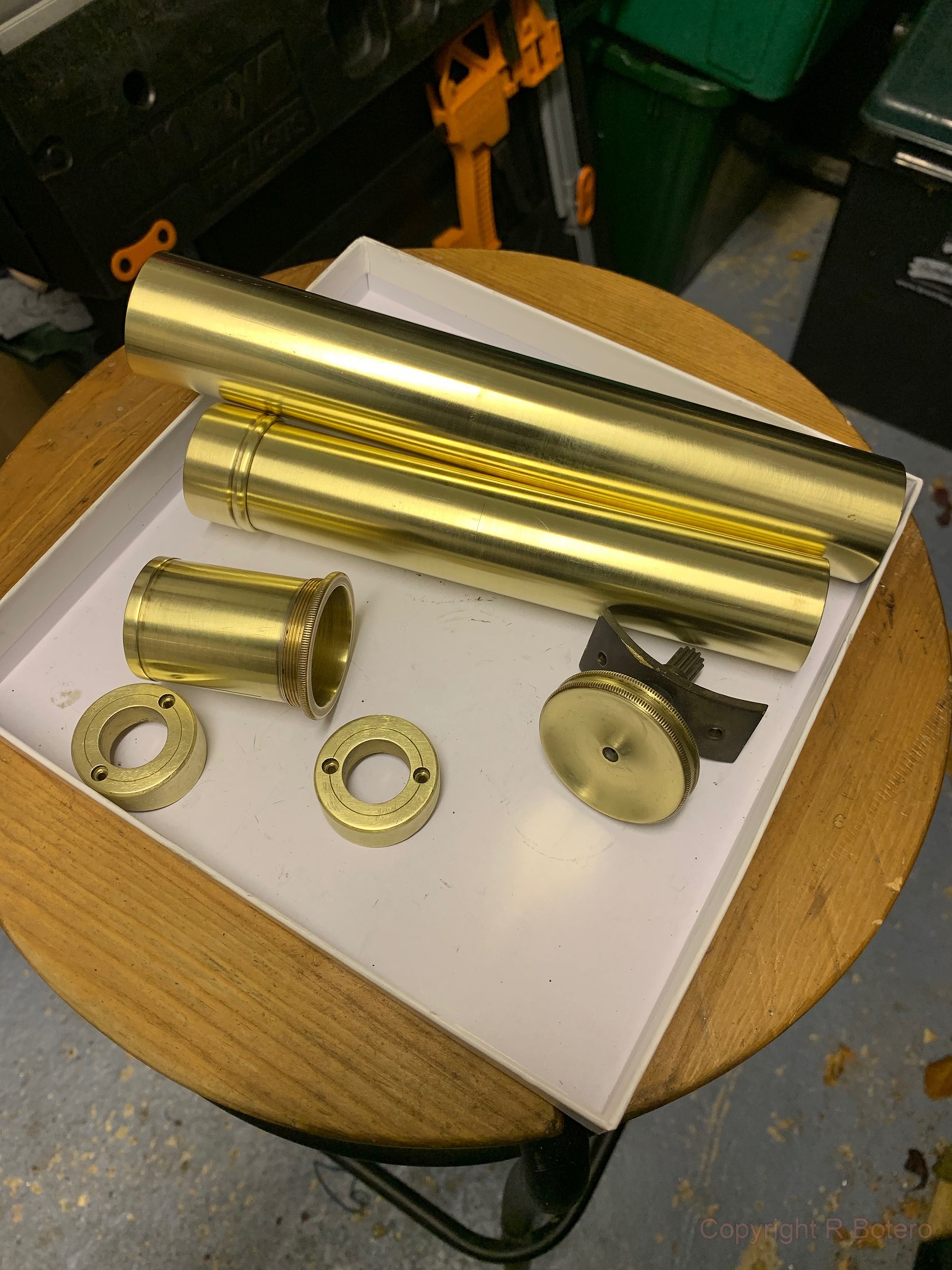 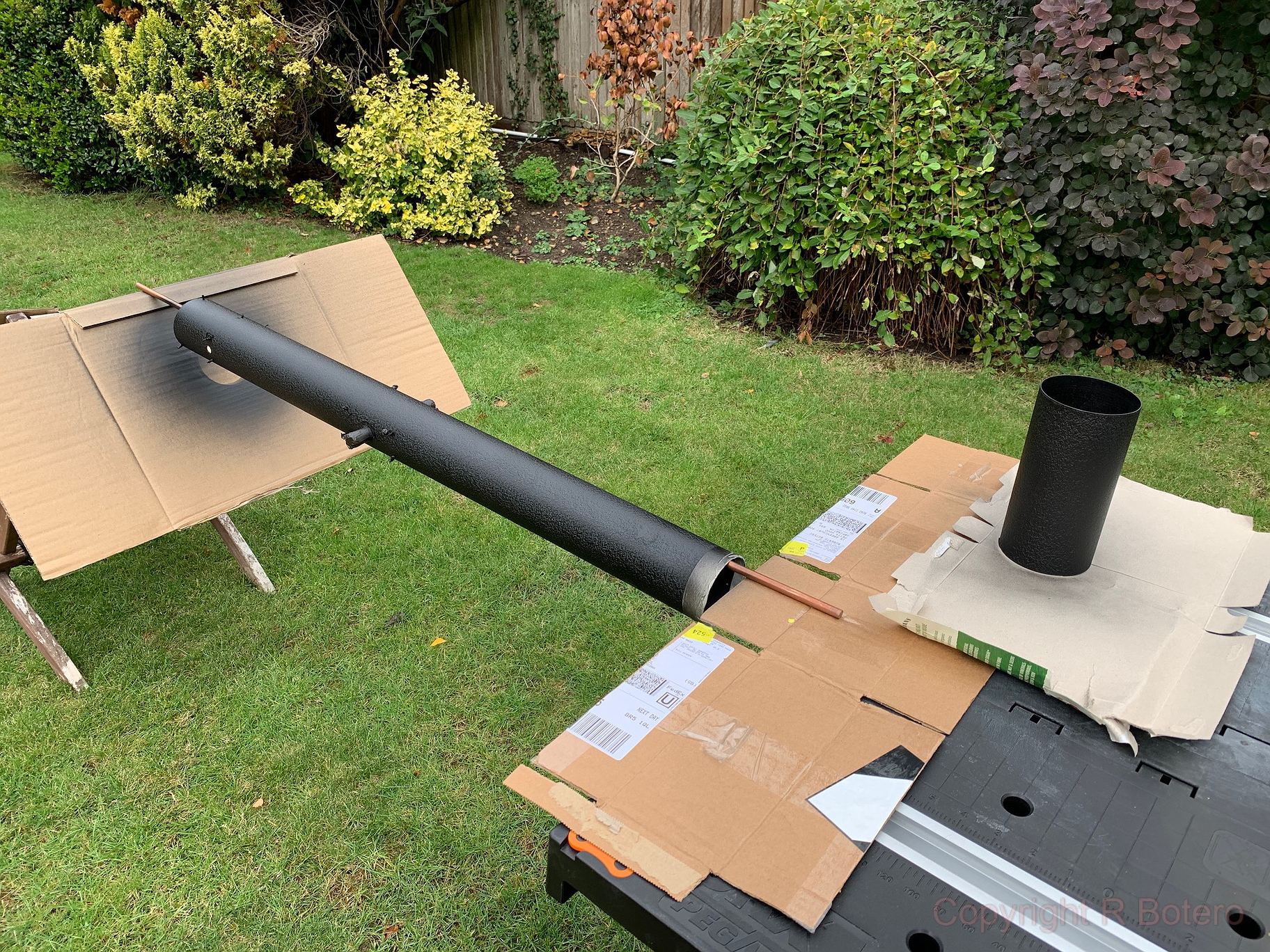