That's interesting. Can the G7 be tethered and PC controlled?

If I saw right it does not need an external long exposure device. It seems that it has it built in. Is that correct. The Yotuber only took 6 sec shots, but the menu seemed like it could do more.

I don't know if it can be PC controlled but I suspect not. Yes, it has time lapse built in. Why aren't all cameras this way? You can do as many shots as you wish. You're only limited by memory and battery power.

I took a picture of Andromeda with a cheap lens a while back:

You can get something significantly less than your budge used. What exactly do you want? Max cheapness? Latest tech?

This budget of $1k is camera only or with lens?

I have THREE copies of the rok 135 f/2, and all 3 have quality problems. I am now done playing this game of returning lenses and testing. Huge waste of time.

Make sure you buy from somewhere with a good return policy if you are going to go down this road. As well 135mm FL is pretty much too wide for almost everything IMHO.

D5300, H-alpha mod, and you'll still have plenty left over for the lenses.

These were taken using my POS  Samyang 85mm stopped down to f5 , from my old Bortle 8- backyard, no filters.... 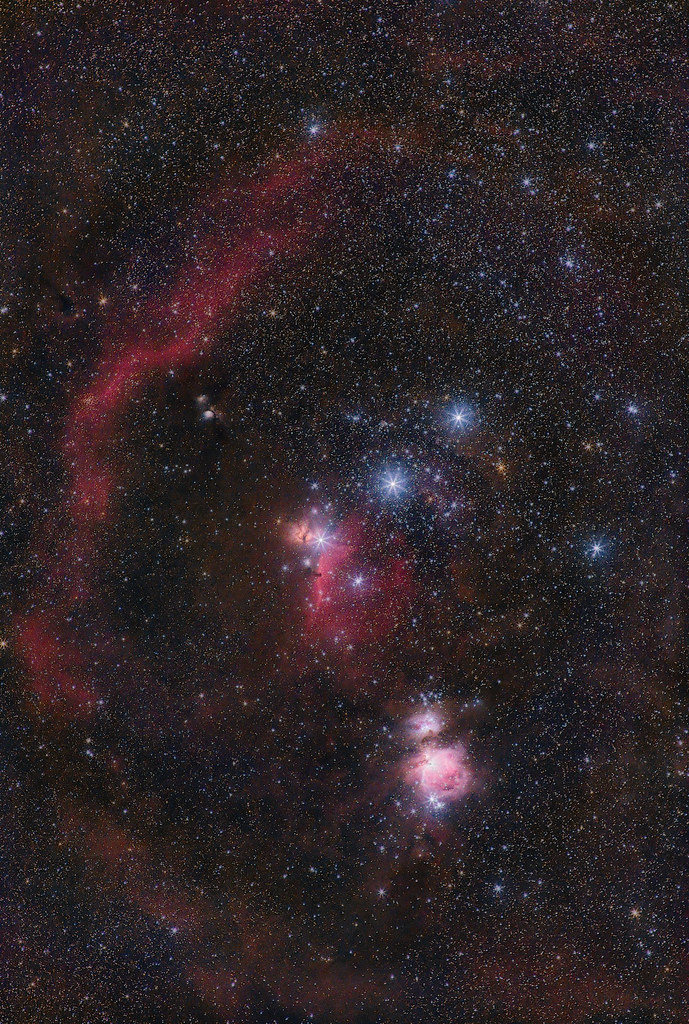 When you post those great images, you should always post the total exposure time, f/# and ISO.

I love my canon M's. Light, Easy, and imaging is a pleasure.  With that canon M6mkII, is my goto at this point.  You can find these under 500 on Canon website.  HIGHLY recommend.

Approximately 5 hours integrated expsoure time with a Canon M, at iso800, iso1600, iso6400, 2 hours of iso6400 was dithered, there are no lights, darks, flats or bias used in this version.
This was taken with a Canon M6ii, RC6 scope on a CEM25P, guided by a 30.00 web cam, sub 50.00 SVBONY guide scope, PHD2, and Astrophotography Tool on a windows 10 mini pc on the mount, and powered by cheap power bank, remote controlled with VNC via tablet, phone, laptop, desktop.

IF the intention of this camera would be just for landscape/MW & time lapses then I would first recommend strongly against a 135mm lens, but instead depending upon camera & sensor a 12-24mm for that project. Some of the Sony (maybe other MFRs) full frame also have APS-C shooting which is nice cool feature. For well under $1000 you can find Sony a6000 series + lens. Even if you end up buying APS-C, still consider the full-frame lenses as they will still be compatible. I ended up getting Tamron 20mm FF for my FF Sony, but also has been used with my APS-C Sony. But an APS-C lens will not work well with full frame camera though (or expect to do a lot of cropping). For the Sony you can tether using their own Image Edge suite, or use Capture One.

Do you have an existing DSLR you are already using with the EdgeHD, or are you using CCD? No matter what route you go, keep in mind that another factor when choosing DSLR/Mirrorless is the lens family you will inherit. Reason I ended up buying Sony a7r this summer over Nikon z7 was because Sony can use Nikon & Canon lenses, whereas Nikon can not use anyone's lenses. If I find a Canon or Nikon lens I must have, then I am set.

Edit: Another thing to keep in mind (I know I am going to be Hulk smashed on this one...), the DSLRs are now akin to the gasoline engine cars, the writing is on the wall, and both ICE cars and DSLR cameras are the past. This summer I spent a LOT of time in the camera world researching what camera to buy (Sony a7rIV vs Nikon Z7 vs Canon) and the past 3 months have shown the camera MFRs see mirrorless as the future, so expect less development on DSLR lines. Sure Nikon & Canon will still come out with DSLRs in the coming years, but they will have less focus, and less technological advancement. No different than late 90s with film vs digital. With DSLR you cant use mirrorless lenses, but mirroless can use DSLR lenses. In coming years DSLR used lenses are going to be cheap, and able to be used with mirrorless.

I think from a quality of images perspective it's a no brainer that you should look at a full frame camera.

There is a recent thread that suggests that the Canon 6D is still the most used camera out there but I guess any full frame will beat cropped sensor cameras in image quality.

Also the 6D is super easy to use and it connects to imaging software easily and can be operated via USB.

Don't forget that full frame cameras need lenses/telescopes capable of delivering well illuminated and corrected images with a circle big enough to cover the whole sensor. And these are a lot more expensive than their APS-C counterparts.


Also tagged with one or more of these keywords: astrophotography, CMOS