I've got an AT72EDII, DSLR, and Orion field flattener.  It's much better than no flattener, but still isn't perfect in the corners.  I've read about fine tuning flatteners by adjusting the spacing, but that doesn't appear to work.  I tried adding spacers between the flattener and T-ring from no spacer up to a 5mm spacer, and the stars in the corners look unchanged.  Am I misunderstanding how to fine tune it?  I've attached crops of the corners of a couple images.  The first with no spacer, the second with a 5mm spacer.

Do all four corners have the stars elongated in the same direction?   If no, that would probably guiding / tracking errors.   If the stars in the corners are all elongated outward in each corner, or seem to rotate around the center of the image, that would be your backspacing... 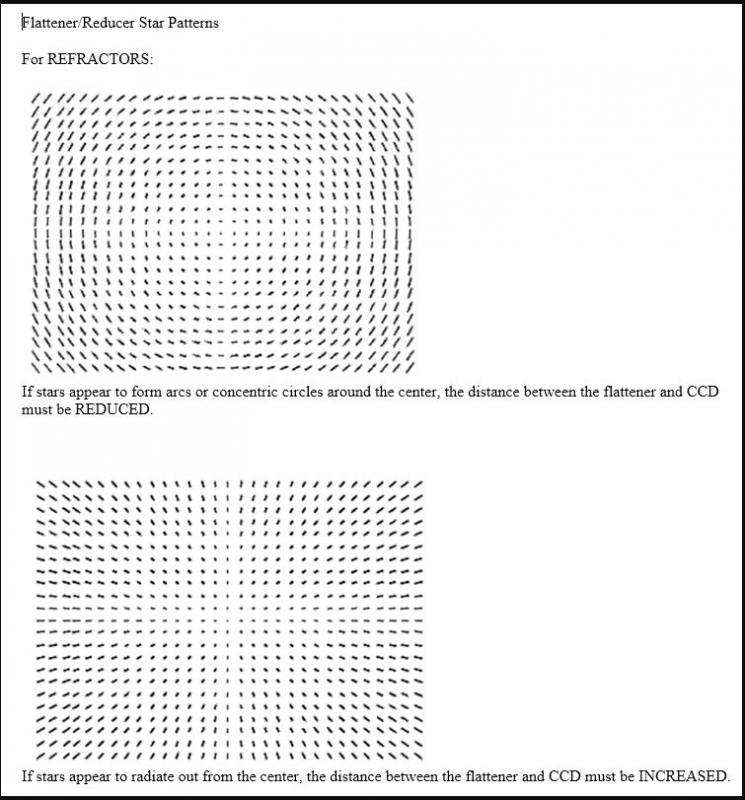 I had this same issue with an Orion EON72ED (likely the same optics under different brand) and a Hotech SCA flattener.  I had been told that the spacing had to be maintained very precisely for best results.  While I think that's true for flatteners designed for a specific scope, I think it's much less true for generic flatteners.

Like you, I started by trying to adjust the spacing in small amounts, but found no change so I ended up doing 5mm jumps in spacing.  While my flattener's spacing was spec'ed to be 55mm, I found the best images at a whopping 70mm!  That caused some noticeable vignetting, but that could be compensated for with flats.

Thanks to both of you.  The stars in the corners all fan outwards to their respective corners, so I think additional spacing is required.  I'll start adding more to see what works.  Then I'll have to decide whether the star shapes or vignetting bothers me more.


Also tagged with one or more of these keywords: equipment