As I see it, there are two truths in visual astronomy when it comes to new telescopes:

I've had the telescope for about 18 months now and I've been able to put it to pretty large amounts of use in that time.  I thought it would be useful to post a follow up report on the telescope now that I have a broad range of experience with it.  It's been nearly all good, and a few tweaks of the telescope in that time.  For the backstory on this instrument, I posted a First Light Report in July 2019 that can be found here.

My original goal was to have the largest aperture, premium dobsonian that could be built with native tracking that didn't require a ladder or wheelbarrow handles and could fit into the backseat of GMC truck.  I thought I had exactly that 18 months ago when I took delivery of the scope.  And today, it remains true.  The telescope has continued to perform at a top level every time that I've had it out since then. 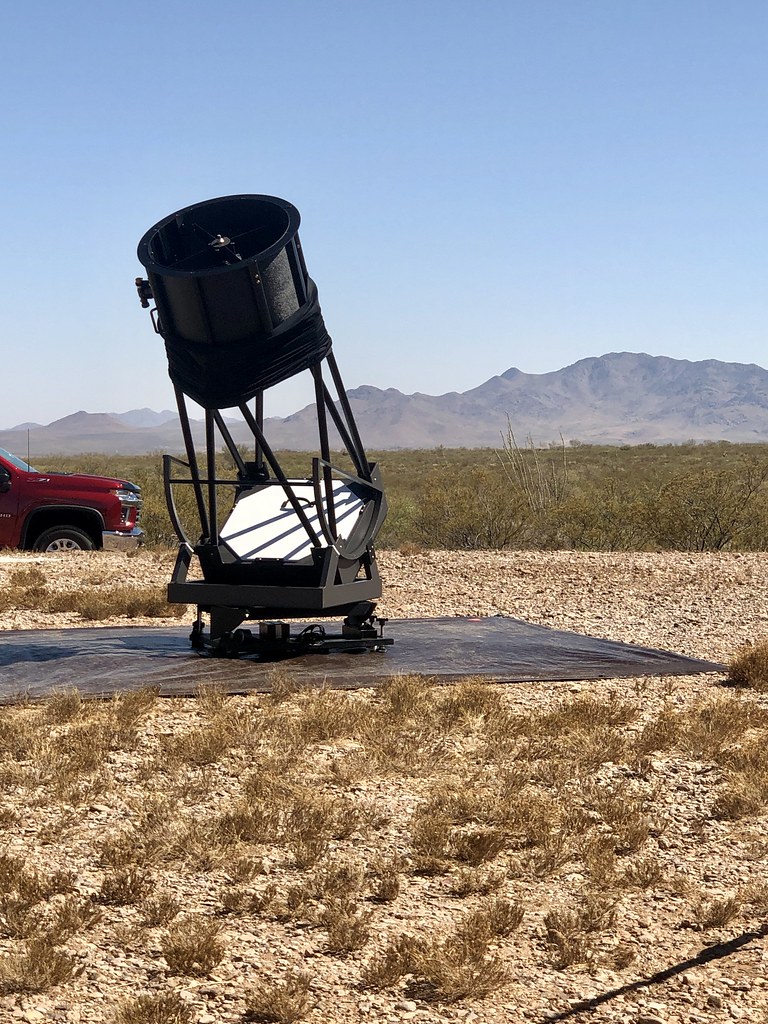 This isn't to say that the telescope has been perfect, because it hasn't.  As I've learned its personality there have been a few things I've had to learn to manage and a few things I've changed.  None of them detract from the enjoyment of the scope or make me wish that I'd made a different decision. 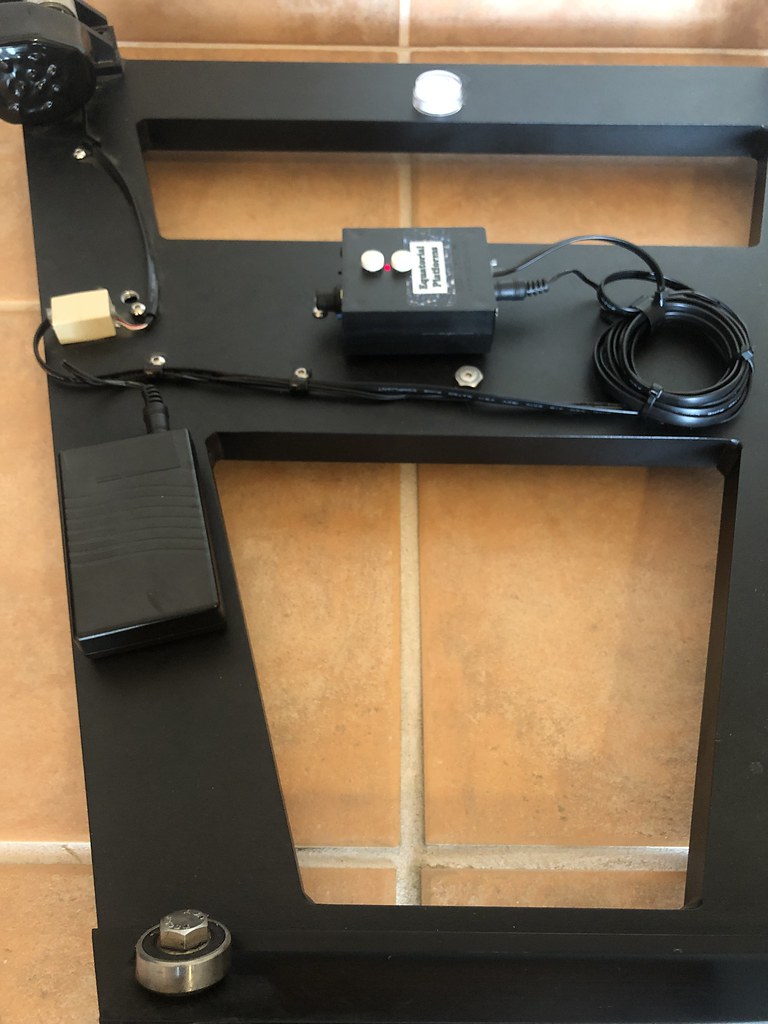 In conclusion, I had hoped to build a lifetime telescope with this project and I'd like to say that I've succeeded.  It has been the perfect telescope for me and has given me nearly zero issues.  But if I'm being totally honest, I have to admit that I've caught myself more than once standing at the eyepiece thinking..."I wonder what this would look like with a 30" mirror". 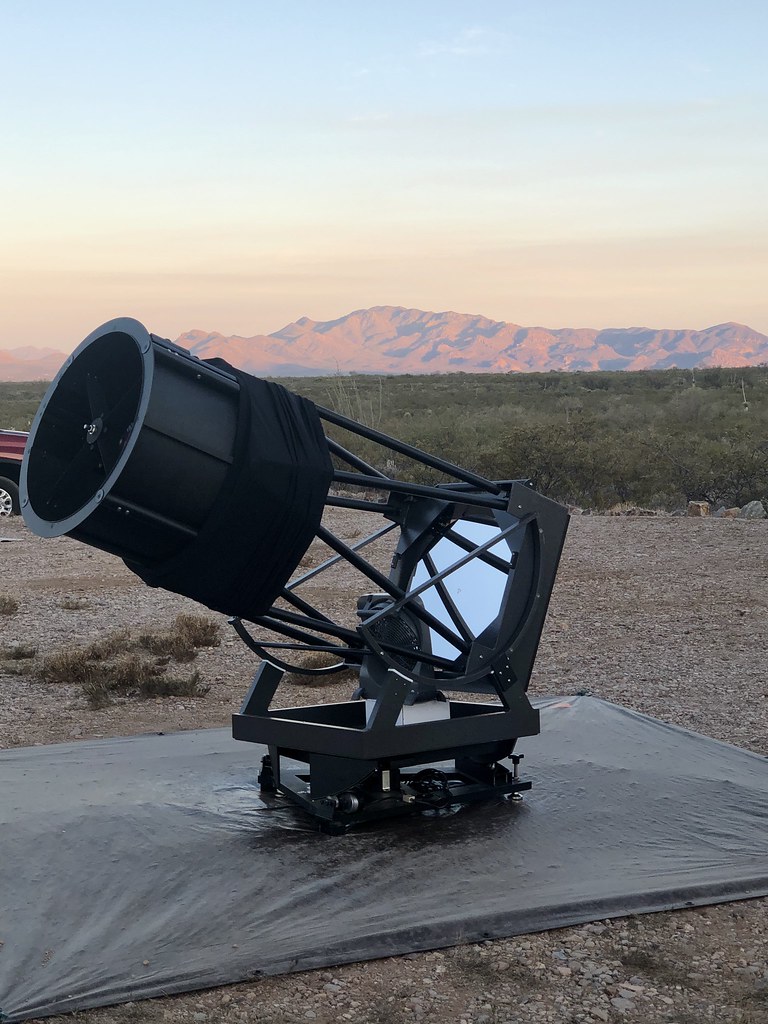 The Animas mountains of New Mexico put on quite a sunset show while waiting for darkness last week near Portal, Arizona.

Sounds like an awesome telescope.  Thanks for the original and follow-up reports.

You had a Jason Refractor as a kid too, huh? LOL My 1st useful telescope. Also had a 60 or 70 mm Jason with a built in Zoom EP. I used that puppy from 1977 (X-mas) to 1981. I bought a used Criterion Dynascope 6 inch reflector after that. Well, my mom did. Was a HS graduation present. Best one ever!

Beautiful scope.  Thanks for the report.

That's a cute little scope you have there!

All kidding aside, Tom's handiwork is very impressive. My SpicaEye 24" F3.2 was delivered by Tom in May of 2019 and I have been equally impressed. And yes it is built like a tank, which I love.

I got the GoTo which has been very beneficial for me. Since I have a muscle disease, I have it permanently housed in my backyard. Even though my back yard is Bortle 4, I'm sure it doesn't compete with your location.

Glad to hear that you're still happy with the SpicaEyes scope Mike.  Sounds like it is performing beautifully.

My SpicaEyes clone "Excalibur" (18"F3.5) is very similar to your scope and should do me for the rest of my days.

With Tom O's blessing I built mine a couple of years ago and may still build a platform for it.

Nice location you're set up in !!!

If I remember it right, one of my quartz secondary has such a thickness.

What mirror cell do you use for EQ mode of operation?

That is a fantastically impressive telescope that you have.  When I took delivery of my 20" at Tom's shop, your 24" was sitting there in the shop right next to mine.  Tom said "just needs some final testing" about the scope.  It took my attention away from my own beauty that I was there to pick up for a couple of minutes.  It was sitting just out of the left side of the frame below when I picked my 20" up. 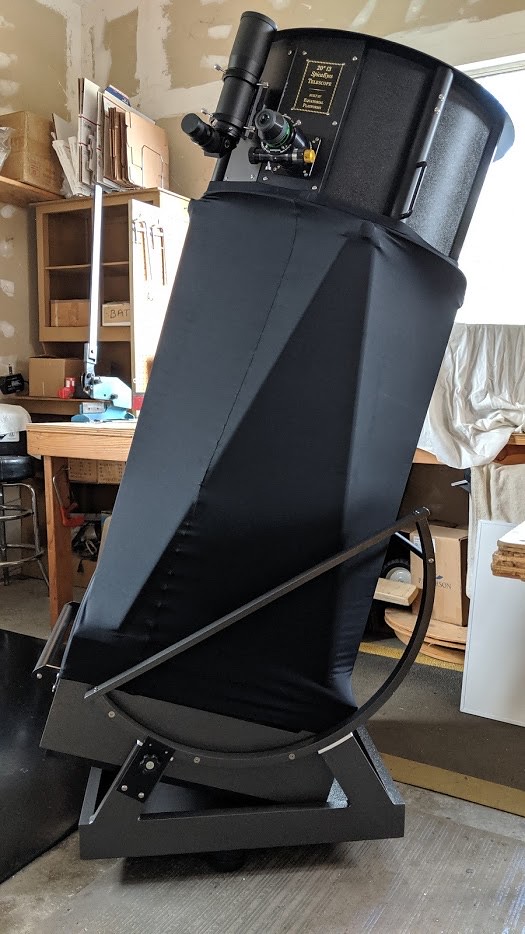 What mirror cell do you use for EQ mode of operation?

The mirror cell was built by Nate Currier at Aurora Precision.  It's an 18-point design with whiffle tree edge supports.

Interesting, I just went to Nate's site to dig up a link for this reply....and he's recently redesigned his website.  The mirror cell image that he's using on the site is the exact mirror cell that he built for my telescope...20" x 1.25" @ f/3. 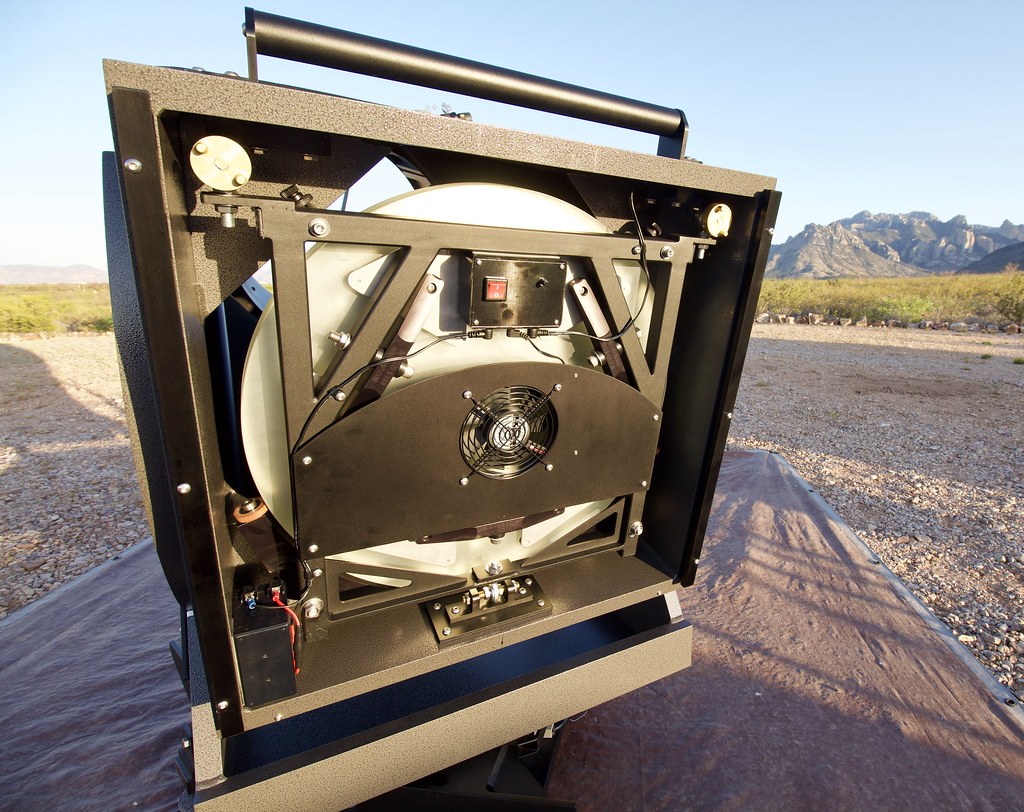 A beautiful telescope and a superb observing location, Mike. If I may, here is my 22" f/3.3 Slipstream version, a telescope I was very fortunate to acquire 4 years ago. As far as I know, it’s the only SpicaEyes scope of any size in Canada. Seriously, it’s like having a small, research-grade telescope in the backyard. The Si-Tech drive system, slip clutches and Argo Navis are a joy to use for this rapidly aging star hopper. The pointing accuracy is usually very good and frequently excellent. I have to agree with your assessment of the features of your telescope. You have to be careful with the supplied 12-volt rechargeable batteries; like you, I’ve had a couple lose charge over the years but that was due to negligence on my part. If I haven’t used the telescope for a couple of weeks, I top up the charge and before an observing session I make sure it is fully charged up. Congratulations on your acquisition, if it’s anything like mine, it will last forever.

Thank you for the update.

It takes at least a year to get to know a scope.

Pease 1 is a 15th magnitude object. That's if it was condensed into a star point source. Since you were able to confirm, I'd say the scope is DEFINITELY up to snuff. Great job!

Getting down to that area is on my bucket list.

But if I'm being totally honest, I have to admit that I've caught myself more than once standing at the eyepiece thinking..."I wonder what this would look like with a 30" mirror".

Which leads to the “I wonder what this would look like with a 50” mirror”.

Matt does that fit in the motor home?

Pease 1 is a 15th magnitude object. That's if it was condensed into a star point source. Since you were able to confirm, I'd say the scope is DEFINITELY up to snuff. Great job!

Getting down to that area is on my bucket list.

Depends where you observe.

A 20" in the same skies could go a magnitude lower.

To put that in perspective, that is about 2 magnitudes brighter than the stellar limit for the scope.

In the middle of a globular, it's even harder because of identification of the target.

Here is a list of faint, distant, targets to try:

Thanks for the list Don. It will with me on my next dark sky trip.

I went with an EQ platform solely for the simplicity.  I very much enjoy starhopping and being at the eyepiece.  I spend my professional life looking at a screen and finding solutions to highly technical problems.  I wanted to avoid that at all costs while observing....but I still wanted tracking.  That led me to the EQ platform.

) I were to ever commission another, larger aperture instrument I'd rather have a StellarCat or SlipStream system for tracking.  If had larger than a 20", I'd want the 6" of additional height from the EQ platform back.  I'm not the tallest guy on the observing field.

Your 18" is a sweet scope.  Knowing that it was built similar to Tom's design, your build thread on the scope was a factor in my decision.

Which leads to the “I wonder what this would look like with a 50” mirror”.

Thanks Allan!!  Even now, I spend more time looking at the "Mirror Blanks In Stock" section of Mike Lockwood's site than is healthy for my bank account.

Thanks for the update, Mike. It is important that users write reviews (or updates) after this much experience with their scopes. How many times a year, after all, do we get to go to remote sites. Hopefully we average 12. I think 18 months is the right time for a review, and of course only good scopes can get reviewed at 18 months. Glad to hear it is working well for you. A stable 20 that you can load and unload by hand is a treat.

I absolutely love this scope.  Thanks for sharing your reviews, and check in one year later.

I am thinking about a lifetime dob, and this package looks enticingly like the perfect tool for the job.

As a question, how do you look at an object 20 degrees off the horizon comfortably?

As a question, how do you look at an object 20 degrees off the horizon comfortably?

This is an excellent question.  In my case, the only time that I'll find myself looking at an object 20º off the horizon is if it's in the southern sky.  Omega Centauri, NGC 5128, etc.

In cases such as that, I'll reset the EQ platform before pointing the scope at the low object in the south.  Resetting the platform will "lean the telescope" to the east, causing the focuser to angle upward if the telescope is pointed to the south.  With the observing chair set as low as it'll go, it's seated observing and comfortable with the eyepiece in this position - but it *is* low.