Greetings. I'm new to planet hunting and struggle with probably one of the basic challenges -- finding the planet. GoTo gets close, but with a 4800mm scope and small chip camera, I still spend fruitless time slewing around the sky looking for the needle in the black haystack through a 5' soda straw. What are some tips and best practices for setting up the scope and mount for consistent targeting success. Thanks.

Do the setup as accurately as possible, the better that is the less the error that the scope has to account for. Looking "about level" and "that's about North" just is not good enough.

We seem to just expect a small silicon chip and some software to do it all for us.

Set your own custom location, if not already done so or has the scope GPS?

Other ideas: Goto a nearby significant star, center that and synch the scope to that.

Then goto the planet.

But like the "do the setup accurately" it means additional time. And so much seems to be "I want it better, but don't want to put the effort or time into it."

Have said that the purpose of the alignment is for the scope to work out how badly we have supplied the data and done the setup. Can unfortunately mean that "Alignment Failed" just means we have done it so bad the scope has given up on us.

Centre the planet in the eyepiece, then switch out eyepiece for the camera.

Mount a Telrad to the tube and skip the GoTo.

Here are some things I do when the go-tos don't land like they should:

1. Use a high powered illuminated reticle eyepiece then swap over to the camera.  (remember to change focus to the camera)

2. Put the gain on your camera up to 100% and defocus a tiny bit.  Now you're hunting for a big bright disk instead of a tiny planet.  Of course you'll need to re-focus once you have it on the sensor.

3. Use a bahtinov mask with the gain on high to create diffraction spikes radiating away from the planet.

4. Keep an eye on the histogram feature of your image capturing software.  Sometimes you'll see it move before you notice anything actually on the screen.

Of course the best tip is to have your polar alignment and go-to calibration as accurate as possible.

I have had the same problem, as the sensor on all my planetary cameras are small.  I went with a flip mirror system where I have a crosshair eyepiece parfocal with the camera sensor, this has made things MUCH more easy for me.  I have both an inexpensive Omegon, which has a plastic body and is setup for 1.25" and a more expensive Vixen that is a 2" and more robust to support the weight of the filter wheel, which directly screws into the back of the mirror housing.  It makes centering the planet and coarse focusing a lot less frustrating than swapping eyepieces.  Of course, careful polar and Go-To alignment is always helps too.

In the bottom photo, I keep the scope setup and ready to go, just in case I get a shot at Mars.  I do the Go-To alignment with a 40mm Plossl (I just like it) which works fine in the Vixen, but vignettes in the Omegon; then switch to a 12.5mm crosshair plossl once everything gets dialed in. 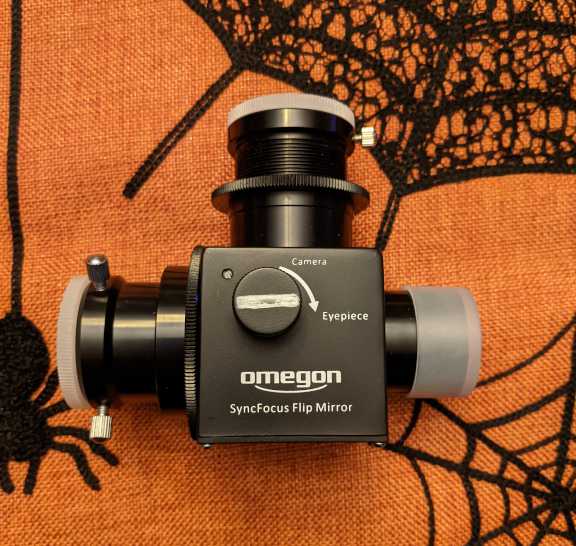 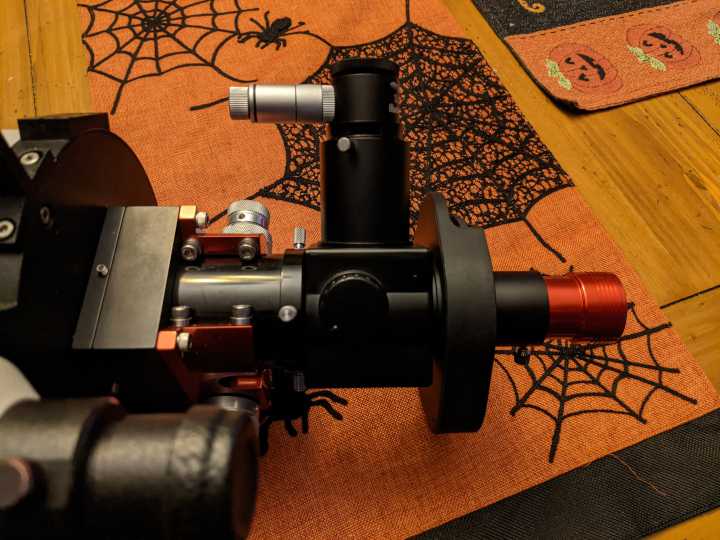 I think Ray has a good simple and easy direction solution that I resort to sometimes.

I also have an 80mm finderscope mounted on the C8 which I align and use with a cross hair eyepiece. So its very easy to find my object with that and then it is usually on my screen, however I should say my camera (QHY178C) has big chip - about 3200x2050 pixels and so its easy tgo pick up the target and then narrow down the ROI.
Cheers Paul

Thanks all for suggestions. I have had some success now with using a 60mm finder scope with an ASI178 for plate solving and GoTo in the ASIair, and then switching to the main scope at 5000mm and ASI462 for imaging. The scopes need to be very precisely aligned (the crosshairs in the ASIair really help with that) and the larger 178 chip in the finder makes plate solving more reliable. Bad seeing now is the problem, but at least I found it! Thanks again.