Several nights ago I was completing a final observation of NGC 40 from this month's Observing Challenge and encountered a histogram problem I had not seen before.

Once I had my gain and exposure for the object worked out, I went ahead and captured 20 darks using my filter wheel 'opaque' filter as usual. Once it was completed, I started live stacking but forgot to go in and apply the master dark I had just captured. Here's how it looked on the screen after I'd been zooming in/out and sketching the object for awhile: 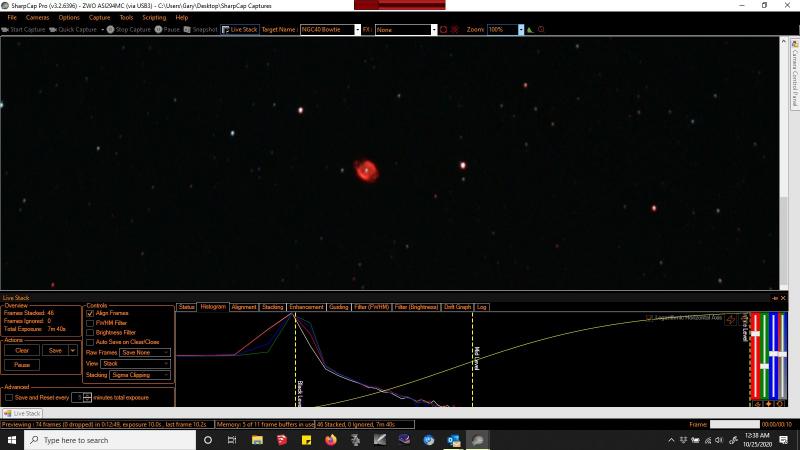 Eventually I realized I hadn't applied the dark. So, I navigated to the dark I'd captured earlier, applied it and restarted the stack. This time the histogram was problematic and looked like the image below. 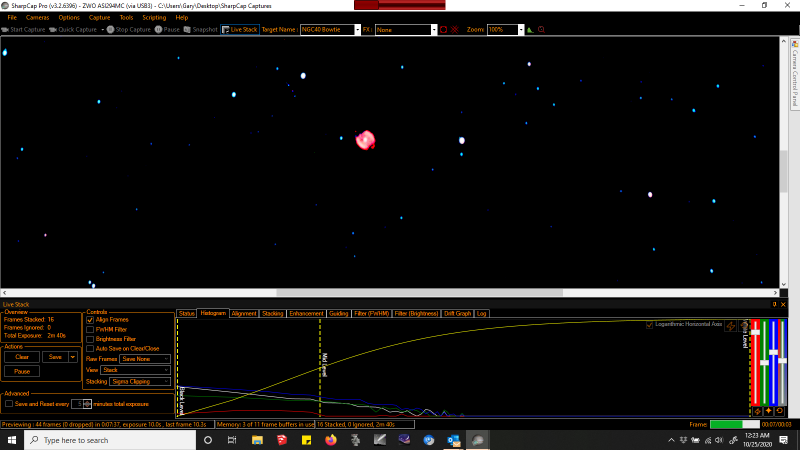 I fussed with it for a bit and wasn't able to correct the problem. So, I canceled the Dark, restarted the stacking and the Histogram returned to what you saw in the first image. So, no harm, no foul, I carried on observing and sketching the 'Bowtie Nebula' and had a great time under the stars.

Yet still, I don't understand what happened and I've racked my memory and can't recall anything unusual that I might have done to mess up my workflow and impact the live stack histogram. I've been using the 'dark filter' in the filter wheel for several weeks now to capture my Darks without problems. It actually a nice convenience.

So, I hope some of you might have encountered the problem and/or know what I might have done incorrectly. Please share any thoughts or ideas that might keep me from making the mistake again. Many thanks in advance for your help!

Well, perhaps I'm not the only one experiencing dark/flats issues.  Recently, I've seen some strange effects and it even prompted me to reach out to Robin.  The problem I'm having is replicating the issue(s) to describe them accurately.  Currently, I'm not sure if it's a 'real' issue, or a workflow issue.  I've developed a precise workflow to follow now so I'm hoping to learn more soon.  I'll be following this thread with interest.

I don't have an answer to what happened, but in the second frame it almost looks as if you have a bunch of really blue hot pixels. Almost as if the dark subtraction went seriously astray. (At least some of the tiny blue dots look like hot pixels, comparing the two frames)

I don't have an answer to what happened, but in the second frame it almost looks as if you have a bunch of really blue hot pixels. Almost as if the dark subtraction went seriously astray. (At least some of the tiny blue dots look like hot pixels, comparing the two frames)

You know Errol, with the black slider at the far left and still way right of wherever the peaks are, you get odd visuals. I've seen it when I experiment by moving the black slider to the right of the peaks - the contrast gets to be extreme and you see solid black backgrounds and highly distorted views of the objects in the field of view. To Gary's point above, I need to fool with this again and try to replicate the condition and tease out the cause. Skies here are not going to allow that until the weekend at best. In the interim, I'm going to post this in the SC forum and see if Robin or others can provide some coaching on this.

I've seen similar effects when the peaks are all off the histogram screen to the left. Are you using some type of LP filter?  Did you try resetting the histogram sliders?

Just using the L-eNhance nebula filter which has never caused this effect. Fussing with sliders didn’t fix anything.

Thanks for that Don and for the link as well. I read most of it and will get to the rest later on. Sharpcap is definitely an ongoing adventure. I posted this question in the SC forum as well. Hope for some further input there. Pending that, I’ll give the brightness setting and Smart Histo procedures a try.
cheers


Also tagged with one or more of these keywords: CMOS, EAA