Along with my Mars challenge I also set out to learn stacking techniques on the Moon. I used the same treatment with PIPP, Autostakkert and Registax as for Mars images, https://www.cloudyni...teleconverters/ . TC-20EIII+TC-14E was physically stacked on the 300mm f/4 PF, used mostly 2/3 stop down, on my Nikon 1 AW1 with Ft1 adapter, 15 fps in bursts of 29 frames (full buffer). I stacked about 30% of 780 frames. I managed to make Autostakkert to do the job now without much artifacts opposed to my early attempts. The key here was to set the area for the "alignment points" to maximum (400 pixels). I did not apply any drizzle and used surface mode instead of planet mode. There are a few remaining stakking artifacts near the north pole of the moon, so any advice on how to get rid of them would be appreciated.

( I also posted a version of this on the DPR astrophotography  forum.)

I don't have any ideas on how to improve the photo, but wow, I've never thought of imaging the moon.  I might have to give it a shot the next time I'm out observing.  Truly stunning photo my friend.

Thanks for the kind comment Moatie. The moon is sort of an annoyance when the desire is to do deep space imaging, so it is nice to get something out of it when it is there and conditions are good.

This is a wonderful image.

I am curious to see just how much improvement the stacking provided. Can you share a single exposure, perhaps your best one or even a "typical" one?

I am curious to see just how much improvement the stacking provided. Can you share a single exposure, perhaps your best one or even a "typical" one?

None of my cameras are capably of shooting 1:1 video so I simply shoot 50-100 RAW photos...I then sift through the single shots .... 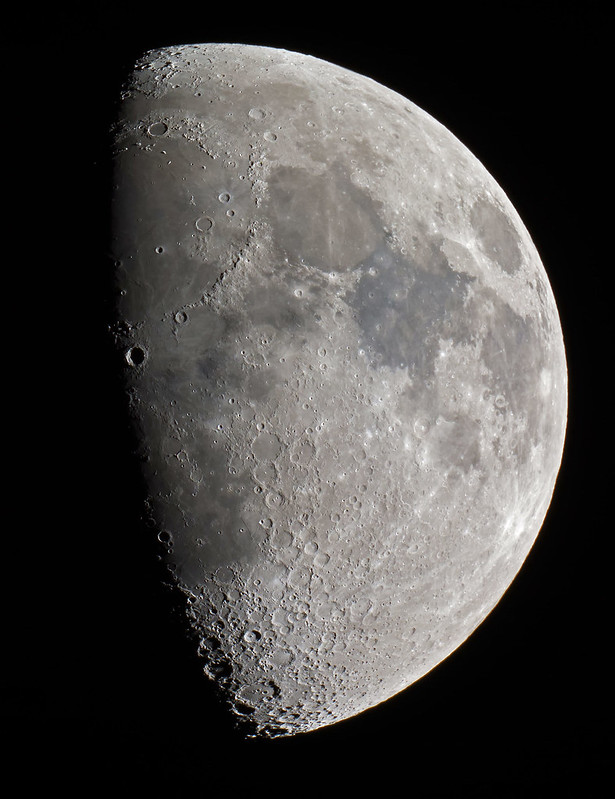 Thank for the comment,  AlenK. Yes, good question, it will of course depend on seeing during the specific take. Here is a single frame in the middle of that stack, selected for a period of reasonably good seeing. Click image for a larger version of similar size as with the stacked image. They open in new tabs, so it is easy to flip between them. There is considerably more noise when clicked large (the '1" ' sensor of the AW1 is more noisy than that of a DSLR, but with better resolving power, which shows when presented at high resolution) and I do not think the tones are as nice as the stacked version. The difference is not as dramatic as with my Mars stacks, but it is certainly enough to make the stacking worthwhile. Exposure could have been increased to be more optimized for single frame edit (15 fps inherently has a 1/60s limit) so noise level if I had gone for single frame edit (possibly reduced to 5 fps to have a few to choose from) could have been lower.

Dave, that is a very nice single Lunar exposure. What type of sensor was it recorded with? As with your case I record raw images, but in bursts of 29 frames so the above capture is not from video. (The AW1 provides high speed shooting between 5 and 60 fps, but with limited buffer capacity.) When the take is 700-1500 frames it is a lot of disk space...

Not a bad effort