Parallax: The Race to Measure the Cosmos

Hold out your finger and close one eye. Change eyes. Your finger seems to jump relative to the background. If the Earth orbits the Sun, then the planets and the nearest stars would seem to shift in position relative to the farthest background. Archimedes tried to measure it. Galileo tried. It was not until 1838-1839 in close succession and working independently that Friedrich Bessel, Thomas Henderson, and Wilhelm Struve were successful.

Of necessity, our macroscopic sense of place paralleled the discovery of the microscopic. The same lenses served both purposes. It is telling that Joseph Fraunhofer’s 1829 heliometer, the most exacting measuring telescope created up to that time, included a microscope for reading its extremely precise scale.

Science is an integration. Internally consistent theories explain observable facts. It is how we know anything. More to the point, facts and theories do not exist in isolation. Seeming contradictions must be resolved or eliminated. That speaks to the problem of parallax. Herschel’s case, in particular, exemplified the exacting standards to which all scientists adhere. It can be hard to know when your very correct theory only awaits the predicted facts and when the discovered facts demand a new theory. 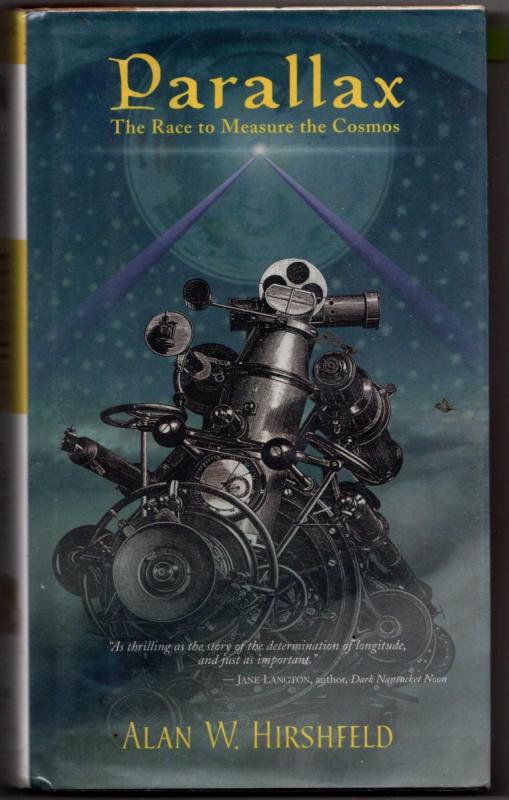 “Photography of the heavens is one area of astronomy in which amateurs have made, and continue to make, significant contributions.” (page 273)

Like Galileo and the savants who followed, Herschel expected that all of the stars are more or less arrayed at random, that the universe is uniform. Thus, stars that appear to be close to each other are not physical companions. This led astronomers to seek pairs of stars, one much brighter than the other in the expectation that the brighter was the nearer of the two and thus a good candidate for measuring parallax. After years of searching with a behemoth reflector, Herschel announced on July 1, 1802, that many double stars are indeed gravitationally locked.

Also integral to the scientific method, established truths are validated by new discoveries. Following the successful measurement of parallax ten new uses were developed for it.

Alan W. Hirshfeld is currently Professor of Physics, and Director of the Observatory at the University of Massachusetts at Dartmouth, and an Associate of the Harvard College Observatory. He serves as the chair of the History of Astronomy Division of the American Astronomical Society.

Very good! I just ordered a new minty used hardcover. Will read the eitire thing when it arrives. (I read at least 50 books a year).

I bought the paperback when it was new.  Very interesting book - I had no idea.

Bought it back when first published - and never read -- until this past August.

I bought the paperback when it was new.  Very interesting book - I had no idea.

A subject that could have been very dry reading. This author really breathed some life into a corner of history not often written about in any detail.

I read this several years ago; yes, very interesting book.

A subject that could have been very dry reading. This author really breathed some life into a corner of history not often written about in any detail.

If you think the book is good you should see the enthusiasm of Alan as he talks about this book and others that he wrote. My club is lucky enough to have restored UMass Dartmouth's scope and dome where Dr. Hirshfeld teaches and he is a frequent speaker at our club.

I read that book when it first came out. It kept me greatly anticipating each chapter, for both learning about the quest (race) for parallax and enthusiasm heard from the author's printed words.