What did I just see?

47 replies to this topic

I was out looking at the North American Nebula and when I happened to glance up near zenith, I saw what looked like a cloud but the sky is otherwise quite clear!

I quickly swung my scope to it and tracked it and it was so crazy looking that I thought I should grab a picture and even got a movie.

It appeared to be rotating.  There was a kind of bracket to either side and then outside of that (only visable by panning around) an almost planetary nebula like ring, which I could not get into the frame (about a 1.2 degree field of view, and this is my image intensifier so grey scale). 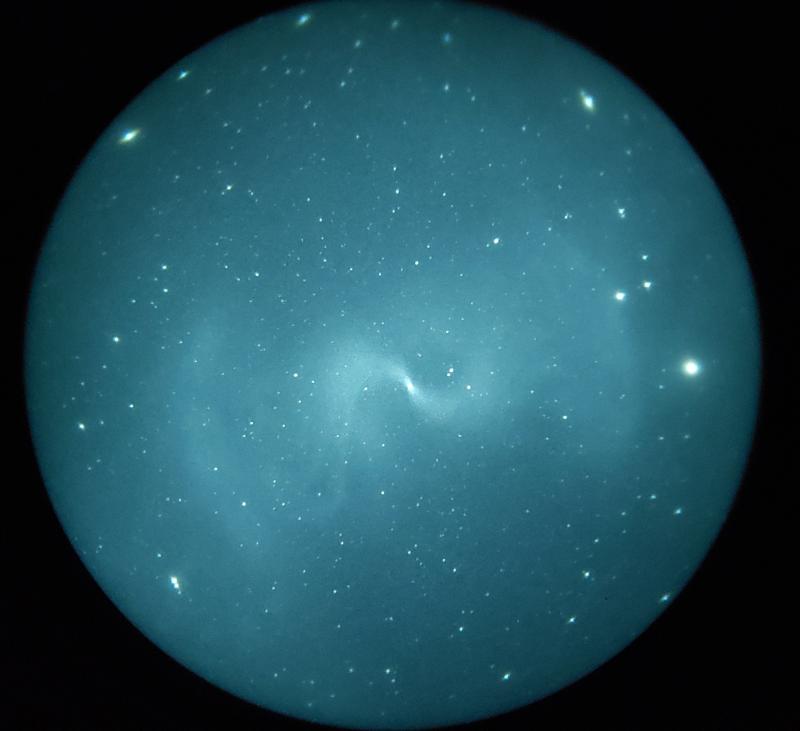 Saw it too amazing

I thought it might be some kind of rocket.  It was pretty amazing.

First post is the last in the sequence.  It was fading quickly.  I did a 17 second movie of it as well.  Very unusual to see.  Bright even to the eye, I had to turn down the gain on my image intensifier.

Saw that in Idaho.  Thanks for the pictures, that's exactly what I saw with binoculars.  Skys have been clear so I was out satellite hunting.  Hit the jackpot on this.  Just registered because of it.  Was hoping someone could explain it.

Saw this as well. Noticed a Grey haze above me and went to the dob. Look just like the pictures. Was moving fast and rotating.

Same.  It was huge.  I will see whether any of the pictures came out well.

I’m sitting out at my 16’ dob and just spent the last 15 minutes watching it! That was absolutely incredible.

It appeared to me like a misplaced and much brighter Andromeda galaxy out by Vega. I swung the dob over and couldn’t believe the show that thing was putting on.

The cylindrical nature of the central object was apparent by how it was directing the gas cones coming out of each side. It was slowly rotating (maybe a minute per rotation), and as I watched it I realized a few rotations were clockwise, and a few counterclockwise! It took me a minute to gather that it was not just spinning end to end, but rotating as well making the apparent rotation flip flop.

What a find!!!! Hands down the coolest accidental discovery in my 25 year astronomy career!!!!

Third time ever out for me. Really happy to catch this with my new morpheus lenses on their first test!

Saw this from Castle Rock, Co and it was truly amazing!

It's was moving rather fast.  It's my best bigfoot picture so far. 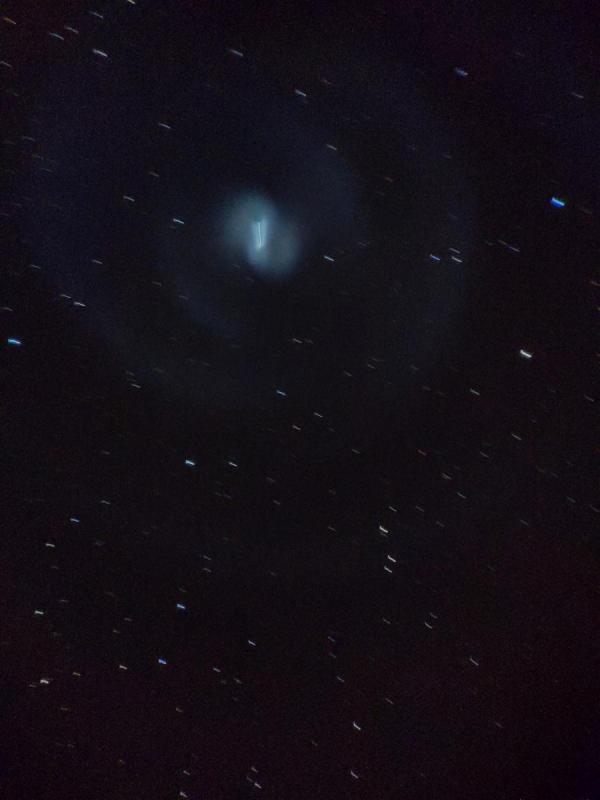 More photos and video please.  I am still enjoying the rush of seeing this!

I had a buddy over doing some planetary observing, and we saw it naked eye first. It was HUGE and just kept getting brighter. Only had a CPC1100 out with some Baader Mark V binoviewers on it, so we observed it for 5-minutes and then I grabbed a DSLR just to try to document it and ask you guys what it was.

Nothing great to see here, but here's an animated GIF I snagged showing it rotating. Nowhere near as detailed as the pics above, but it's something! Keep in mind we were hand-tracking it on a jerky Alt-Az mount!

Can anyone tell which part (time stamp) of the SpaceX video coincides with what we saw?  https://spaceflightn...tatus-center-2/

Thank you for sharing,  very interesting.

THANK YOU. I saw it too! thought i was going crazy. I called my wife out to see it in my scope, we were referring to it as "The Anomaly".

Just posted my video.  It is only 17 seconds and as can be seen, I was just holding the phone to the eyepiece so apologies for the crude work.  I mean it was kind of unexpected and I could see it was fading fast....

Great video, exactly how it looked through the spotter scope and eyepieces. This truly was a once in a lifetime catch! We were so geeked out trying to determine what it was!

It's was moving rather fast.  It's my best bigfoot picture so far.

Your picture shows the outer ring that was to big to fit into the field of my scope.  It is faint in the your picture, but it was very bright in the image intensifier. Had I been using the 6" f/2.8 I could have gotten it in the field I think.

So what exactly was happening? Second stage exhausting it’s fuel and preparing to drop down and eventually burn up? Now that we know what it was, I’m wondering what it was doing....

And I should say that in my above images and the Youtube video, the true field is about 1.17 degrees, and the magnification is about 33x or so. The apparent field of view of the eyepiece is 40 degrees.

Your picture shows the outer ring that was to big to fit into the field of my scope.  It is faint in the your picture, but it was very bright in the image intensifier. Had I been using the 6" f/2.8 I could have gotten it in the field I think.

There were several.  I was enjoying Saturn, then wanted to step down so I was going to fetch another eyepiece.  I just happened to look up and I saw one cloud, bright blue, and twice the size of the Moon in Lacerta.  That's odd, I thought.  It didn't change shape or move at all over a few seconds.  So I pointed a 31 Nagler at it with my 15".  Not knowing what I was looking at, I figured I would ask, so I tried taking a picture.  My phone apparently remembers the settings so I captured at my NV astrophonography settings of 4s at ISO 800.  I'm surprised I got anything at all.  And, the scope wasn't even tracking, hence the different trails.  By the time I realized I was getting garbage, the outer rings had faded.  It looked like a little barred spiral floating along.  I pointed a 13 Ethos at it and could see the pointof light in the middle becomming two distinct points at times.  Definitely wasn't expecting that, though I will be on the lookout for more.  Exciting stuff!

So glad you guys are here....I thought I was loosing my mind last night!!!! Amazing sight!!