This scope seems to be good. Saw some good Information on CN.

However it seems to require extensions for even visual use. Just wondering if I’ll be happy with it for visual?

Also would it be ok for AP? Are the extensions sturdy enough to hold a canon 500D?

What are the cons of this scope is at all?

I want to be sure since it’s expensive. Any help would be good.

cons: inexpensive and light weight, with a proper field flattener produces very nice images and is great for observing the sky. cons: focuser is terrible, it tends to have tilts and be out of collimation.

I use these and they work great. I got this set from High Point Scientific. They are threaded to hold filters also. You can also got to a Moonlite focuser and you would not need any extension tubes.

For visual use you just put the extension in and leave it. It is only an issue if you are swapping back and forth between visual and AP. Most people don’t do that multiple times on the same night.

On the bright side, you have a lot of flexibility for imaging, binoviewers, etc. Removing an extension is a lot easier than cutting the tube to accommodate Binoviewer. So there is actually a reason why they designed it this way.

Looks like standard price is $1,200-2,200 depending on glass type and CF or aluminum tube. I would be more focused on determining what glass type or tube material than worrying about extension tubes.

Perspective is everything, isn’t it? You say you are asking these questions because it is an expensive scope, and the first response says it is inexpensive. For someone new to stargazing, sure, it’s over a thousand dollars so it’s an expensive scope. But compared to other brands of 4” Apos it is inexpensive. So don’t expect premium performance, premium focuser. But yeah it is a good scope. This is kind of in the value category, say 80% of the performance of premium brands for half the price. Arbitrary figures but you get the idea. There are certainly other comparable brands at comparable prices to consider. If you are thinking dual use, imaging and visual, this one looks pretty solid.

Visually, I found my ES102CF to be extraordinarily sharp. On nights of very-good seeing, I have cruised the lunar surface at 212X without any difficulty at all. For visual use with the diagonal, the addition of one of the included extension tubes is required. This need for the use of extension tubes for different visual or AP equipment-applications is typical of almost all modern refractors.

For AP, by the way, I would suggest that you also get the ES Field Flattener:

When used for AP with the Field Flattener, the addition of two of the included extension tubes is required.

These extension tubes screw together. For AP, in conjunction with use of an ES 2" 2X or 2" 3X Focal Extender, I have to use four of the extension tubes... and they still exhibit no flexure whatsoever, that I have been able to detect... contrary to GIFTED1570's assertion. Perhaps my older scope's focuser is different than the one that's used on this current aluminum-bodied version... but I don't believe so. Might be worth an e-mail to ES tech support, however.

Your 500D is a couple ounces heavier than my Olympus E-M1... but not significantly heavier. With the E-M1's additional battery-holder and a wireless remote shutter-release attached to it, it weighs about 1lb 11oz... and my ES's focuser handles the weight easily.

You didn't mention what mount you'll be using for AP. The aluminum-bodied version of this refractor is two-and-a-half pounds heavier than my carbon-fiber version... so for AP, be sure that you'll be using a mount that will solidly handle the total combined weight of the refractor, the finder-scope, the camera, the attachment pieces... and possibly a guide-scope and guide-camera as well.

As an example of what this scope can do, this is a single exposure of the Moon (be sure to click on it), taken with my Olympus E-M1 and an ES 2" 2X focal extender (the original of this photo is two-and-a-half times the resolution of this one, which has been reduced, to comply with C-N posting regulations): 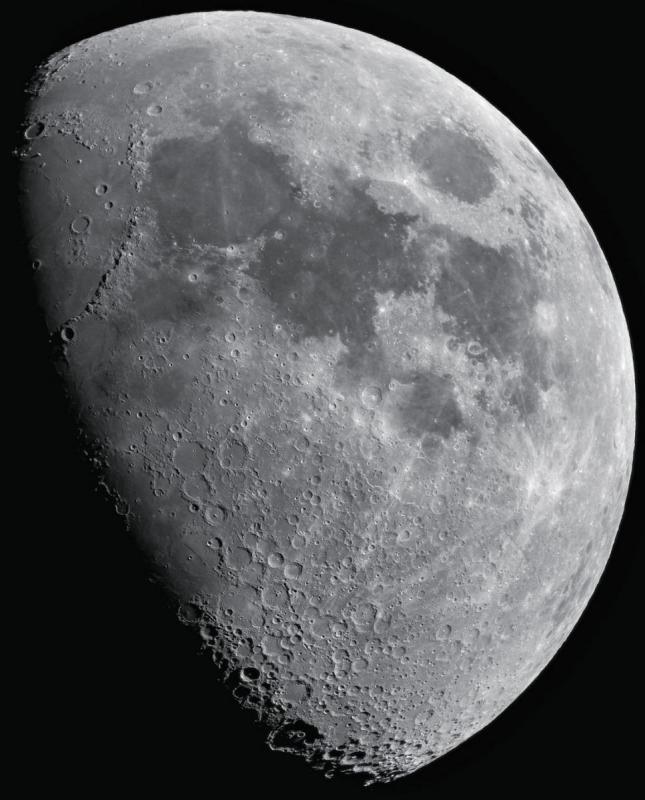 Just for fun, here's a full-resolution crop of the above photo: 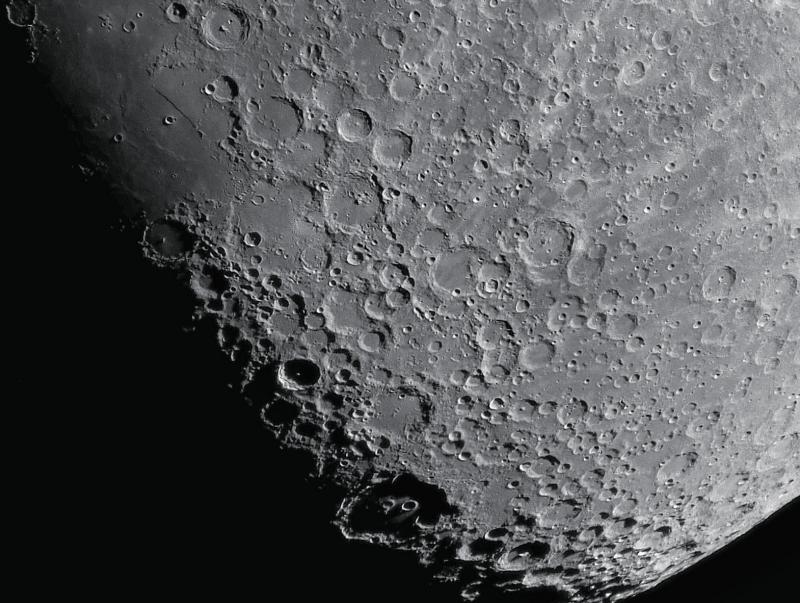 The hexafoc focuser on the ES APOs has a very short drawtube (only about 35 to 45mm travel). That's why you would need those extension tubes to reach focus both for visual and imaging.

I had a ES ED127 FCD100 very briefly. The OTA itself felt solid and came with a pair of quality tube rings, handle bar and vixen-style dovetail. The lens cap fitted on the lens cell directly rather than on the dew shield, so a little awkward to remove. The extension tube screwed directly onto the focuser drawtube, so they were very sturdy with no flexture. However the copy I had came with a problematic 2" adapter that wouldn't accept either of my two diagonals. The included one had to be forced in. Also one of the push-pull screws on the lens cell fell off the minute I unboxed the scope. Because of these QA issues, I returned it back to the retailer.

I've had one for a couple of years, use it for EAA with a .8 reducer or "naked". Good buy for the money, I got it when it was a bit cheaper and had a 10% off coupon, so to me it was a great deal. I used it with the cameras listed in my sig and never have had a problem. It produces very good DSO images. My complaint is packaging. I had to send 2 back on their dime because they came DOA thank you FedX. Bent/Crushed.

Thank you all for chiming in.

The information especially regarding the focuser draw tube was helpful since I am familiar only with the normal R&P focuser - long draw tubes.

Yes, I am apprehensive regarding packaging but I assume should be okay if double packaged with Styrofoam.

Maybe this APO is at the inexpensive end relatively, but the $1000 range is still killing (for me)

Just for fun, here's a full-resolution crop of the above photo:

The extensions are fine. And solid. With a 2x barlow I even use an additional extension beyond what is provided, and there is no problem with stability.

Full disclosure: in the future I plan on swapping out the focuser for something more robust (I have the 2.5" hex), but it is not a deal breaker for me at this point.

I had the ES 102mm APO.  In my opinion, not a good scope.  Color correction not great, focuser developed a problem.  I sold it and bought an APM/LZOS 115mm triplet.  Also got the Riccardi 0.75 Focal Reducer/Flattener.  Completely blows the ES scope away.  Best scope I've ever owned.  See the M31 image below, stack of 4 5min exposures at dark sky site, taken with the APM/LZOS.  This image is drastically reduced to fit CN posting requirements; email me if you want to see the original, and several other images taken with APM/LZOS. 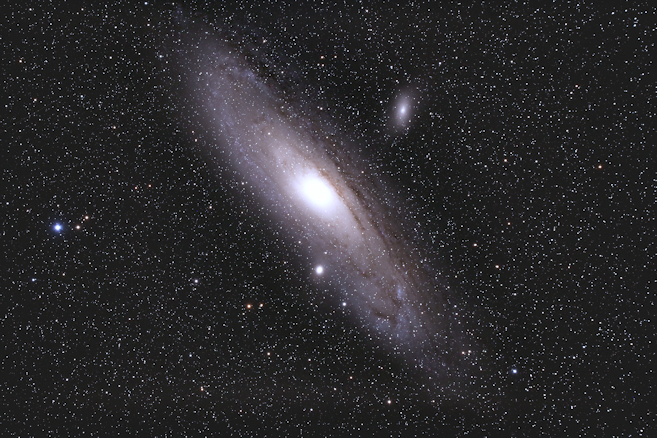 Thank you all for chiming in.

The information especially regarding the focuser draw tube was helpful since I am familiar only with the normal R&P focuser - long draw tubes.

Yes, I am apprehensive regarding packaging but I assume should be okay if double packaged with Styrofoam.

Maybe this APO is at the inexpensive end relatively, but the $1000 range is still killing (for me)

I have a ES ED10207-01 Essential I use for visual only. Comes with two extensions which screw into drawtube (one for visual). Diagonal into it. Very sturdy. It has a very smooth R&P focuser. It's my first and only triplet and I am very pleased with it.

I have the fcd100 4” as a lightweight visual scope. I kind of regret purchasing it.

First of all, the color correction is outstanding. But never saw a hint of false color anywhere. I’m a reflector guy, which means I’m used to never seeing violet fringes on anything. So I’m extra sensitive, and the ES is perfect in that respect.

But it arrived horribly out of collimation and i could never get it right. I finally sent it back to ES. They’ve had it over a month and have been lovely to deal with, but now I’ve had this scope since early summer and have only used it a couple times. FedEx is returning it to me tomorrow, I hope it will show round stars.

Second, the focuser is worthless. If I get a functional scope tomorrow, first thing I’m doing is getting a moonlite.

But considering the time I’ve been waiting, the expense of a new focuser... I wish I’d just spent a bit more and gotten a Tak.

Really like mine! Also you Do Not Need to use any extra extensions for visual use. It comes with extensions needed. 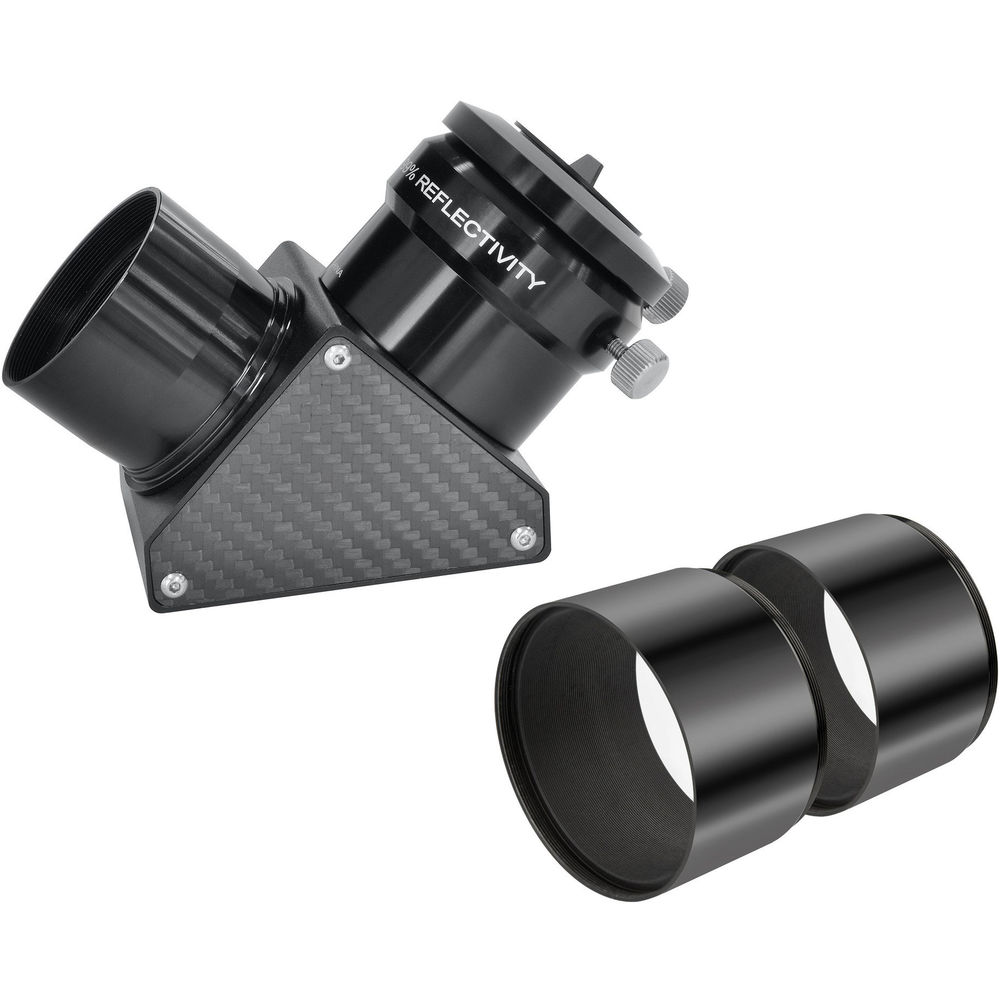 I did also order the Field Flattener*** but now I do not plan on using it. 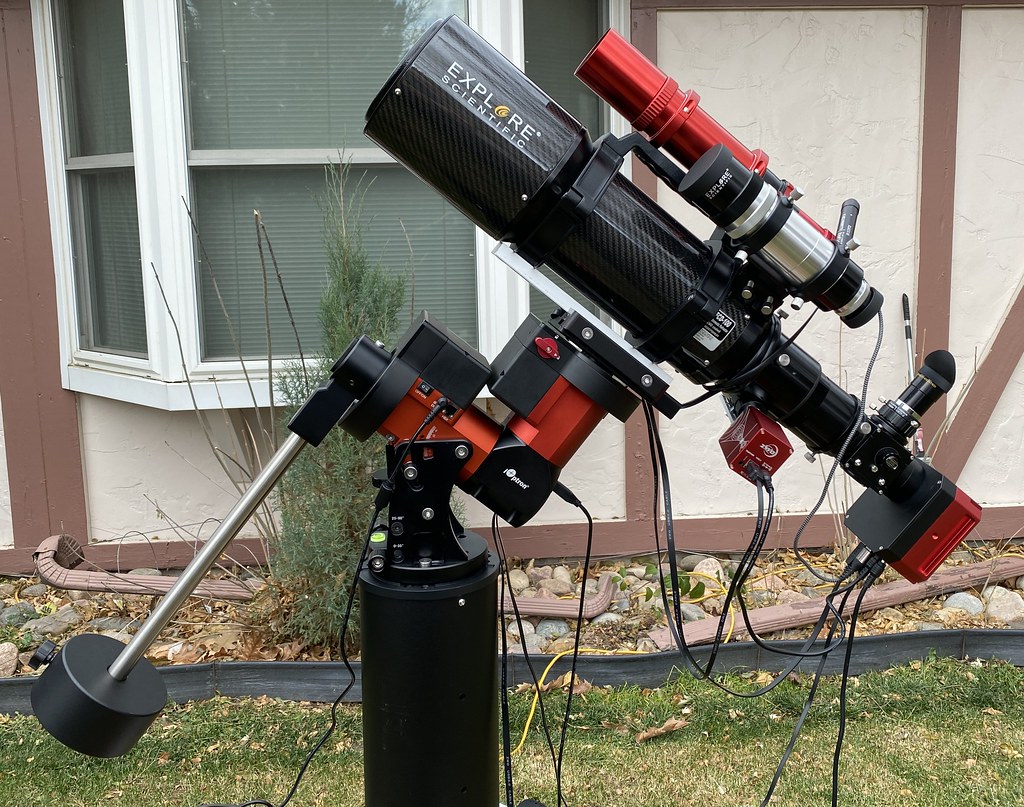 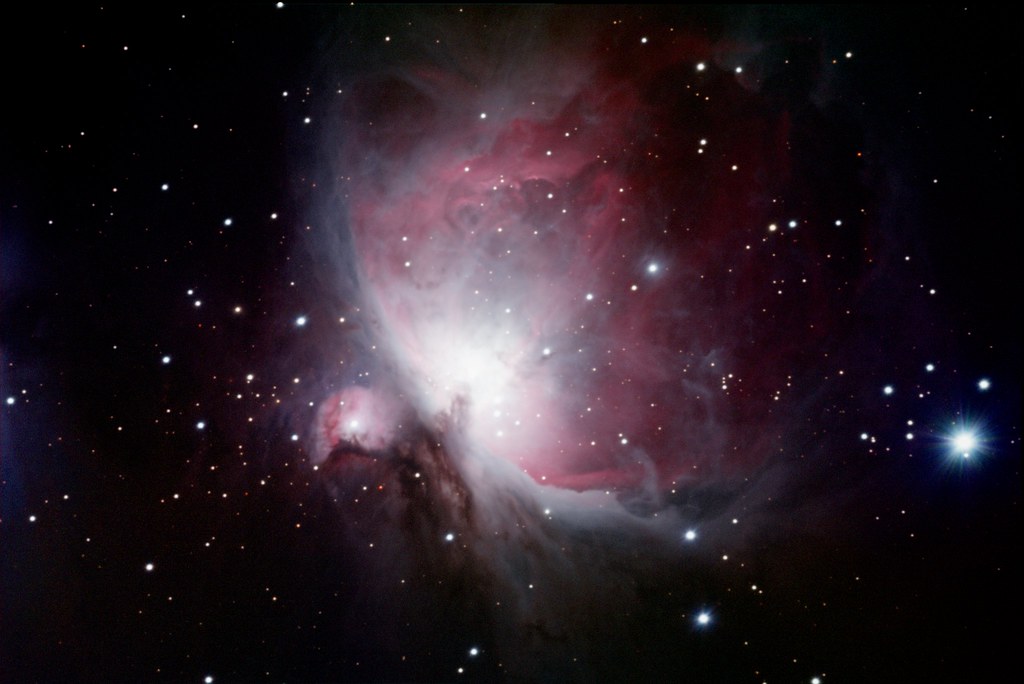