This comet is worth a visit now !

This is the last sketch I made about this interesting comet: 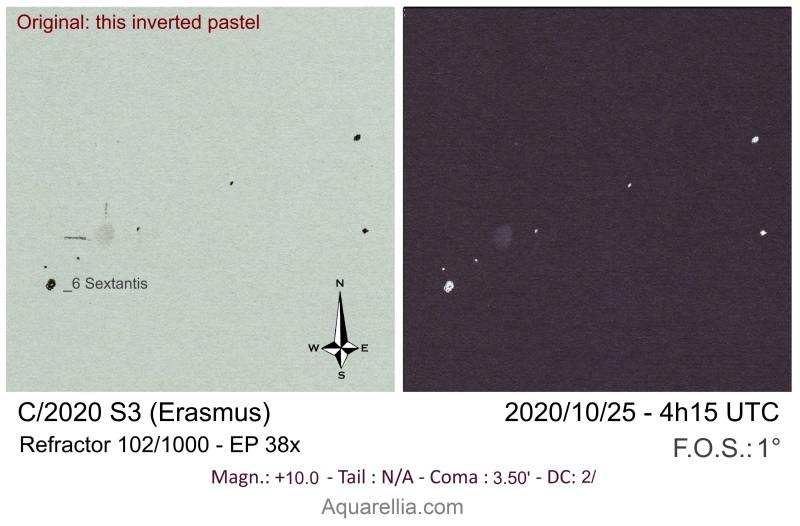 I did this pastel from a "dark spot" in the middle of nowhere with my new van, a sort of mobile observatory.

If weather permit, I'll come back to this comet soon.

Nice capture and congratulations on your mobile observatory!

Looks like you've been after this comet for a while--nice sketch.

Carl H. thinks the comet may have had an outburst--definitely worth a look now.

How about a picture of your mobile observatory?

Thank you to you all for your like's and nice comments.

Ok Michael and Frank, I will make an entry about my van, why not ?

Wonderful! Not an easy task I guess just a little whiff of light

But not so difficult, have a look to the compilation of one hour observation with Erasmus: 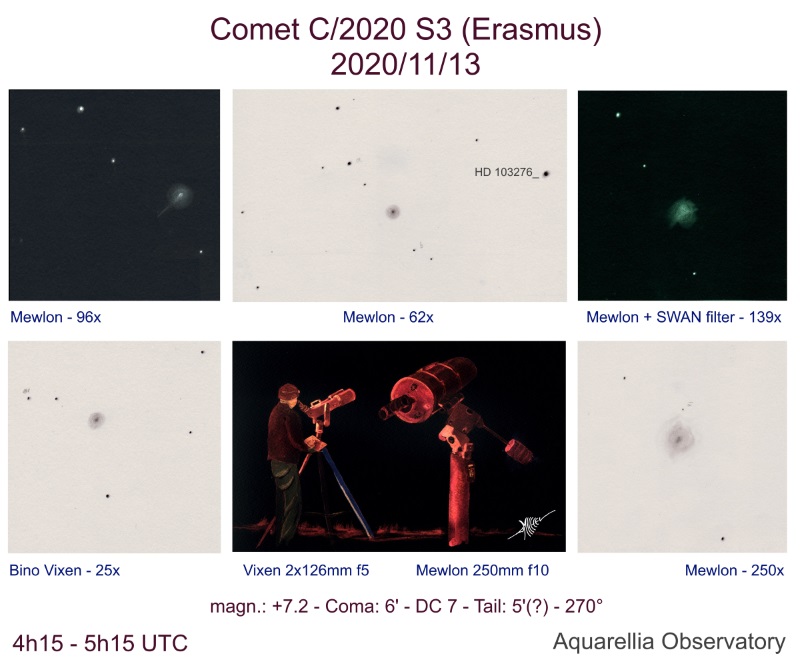 On the first image, the thin tail was only seen 2 or 3 times on 10, so to confirm what I saw that was just not easy, not sure... just the direction looks logical

On the 3rd image we see that the response of the SWAN filter is very high, the Y shape was conspicuous.

The image showing my material, is just a watercolor, quickly done.

Your water color above would be a perfect cover piece for a book about astronomical sketching,I really enjoy the illustration.

I like the view through different instruments.  I was going to take a look early on the morning of the 14th but sadly, when I got up, clouds had moved in.

You make this look so easy. But I know better. Beautifully done.

congratulation - You saw the thin tail !

this comet got too low for many of us.

this comet got too low for many of us.

So it must be still possible for you 'till the end of November but at the same height than me : 17° up the horizon.

Thank you to you all : Downs, Michael, Frank, Christian and all the lovely likers.

Tomorrow, early up for another try 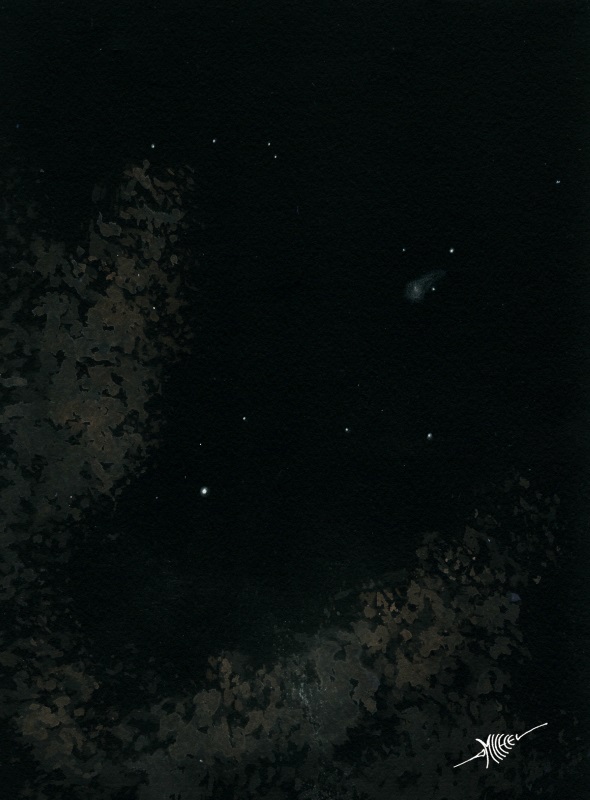 My rough estimation of the magnitude was close to 6.5, DC between 6 and 7 and the tail quite conspicous

I don't know why but I like this comet !

I got a look at Comet Erasmus on the morning of the 19th.  I got out about 4:30 local time but had to wait for it to come up behind the trees on the ridge to my SE--I could see the main stars of Corvus as they appeared but the comet was still out of sight.  While I waited I noticed a shaft of light extending up from the horizon.  It reminded me of the Milky Way coming up but then I thought--the MW doesn't come up there.  It was the zodiacal light--as bright as I've ever seen it.

I saw a couple of late Leonids too as I fingered my chemical hand warmer and moved around a bit to ward off the chill--it was 27F/-3C and I'm not acclimated to those temperatures yet.  Venus was flickering behind the trees and at times was positively blinding.

Just at the beginning of astronomical twilight Erasmus appeared above the trees.  I had about 30 minutes to view it before the sky glow washed it out.  It is green and a fast mover.  I could not see a tail but with the SWAN filter it was elongated to the south and ragged looking.  The core was brighter, too.  I could not detect it with the 12x36 IS binoculars but the zodiacal light and glow from the rising sun were factors.

I like this comet too, but it's going to get harder for me to see as it heads east. 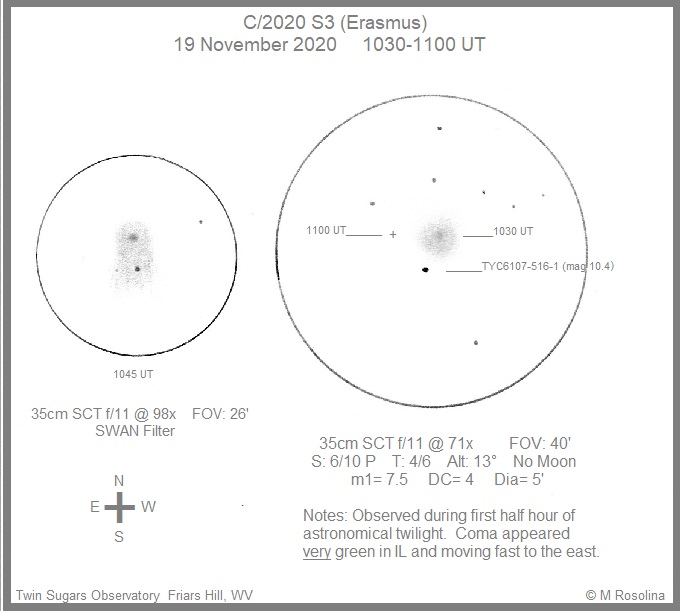 I was out this morning at 4:30 a.m. and while waiting for the comet to rise I too got a good view of the Zodiacal Light. I have Bortle 4 to 5 viewing conditions at my site here in central Vermont, so I don't take the ZL for granted (I've only seen it a few times from here). It was a definite sighting with the brightness extending up along the ecliptic to about Porrima at 5:20 a.m. I was able to spot the comet in one photo and will try to post it later today. Just a little green ball of light, but still exciting. The sky was brightening rapidly by the time it was above the trees on the horizon and I don't think I will be able to discern the comet on the later frames.

My photo from this morning was actually pretty boring--just a little green blob regardless of tweaking. Still, the simple technique of putting the camera on a tripod, setting ISO high, and snapping some images is very effective for extending my vision. I really could not pick it out in the 10x50 binoculars, but there it was on the image.