It's a perfect time for a Solar System Marathon

With all of the major planets in visible portions of the sky right now, the next couple of days are ideal for a "solar system marathon".  It's like a Messier Marathon.....but with considerably fewer objects.  Here's the "list".

Mercury - -0.7 magnitude in eastern Virgo.  10° above the horizon at nautical twilight.

Moon - Thin crescent in eastern Virgo about 25° above the horizon at nautical twilight.

Mars - -1.8 magnitude high in the eastern sky (Pisces) after sunset.

Jupiter - -2.2 magnitude low in the southwest (Sagittarius) after sunset.

Saturn - 0.6 magnitude low in the southwest (Sagittarius) just 4° east of Jupiter after sunset.

Uranus - 5.7 magnitude high in the east in Aries after sunset.  For bonus points, try to find Uranus naked eye. It's in a pretty barren field between the head of Cetus and Aries.  This is very doable if the skies are dark enough.

Neptune - 7.9 magnitude high in the east in Aquarius after sunset - it's less than 1° from Phi Aqr.  Here's the view from a typical 50-60mm finder scope. 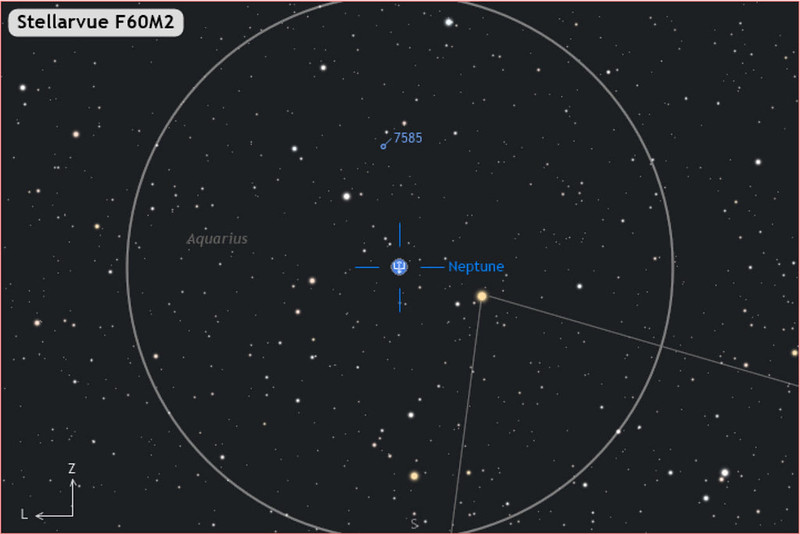 Bonus - Pluto:  This is the one that makes it interesting.  Pluto is currently 40 arc minutes from Jupiter.  At magnitude 14.4 it'll take a little bit of aperture to see.  But it's there.  Here's the SkyTools simulated view with my 15" Obsession and a 31mm Nagler. 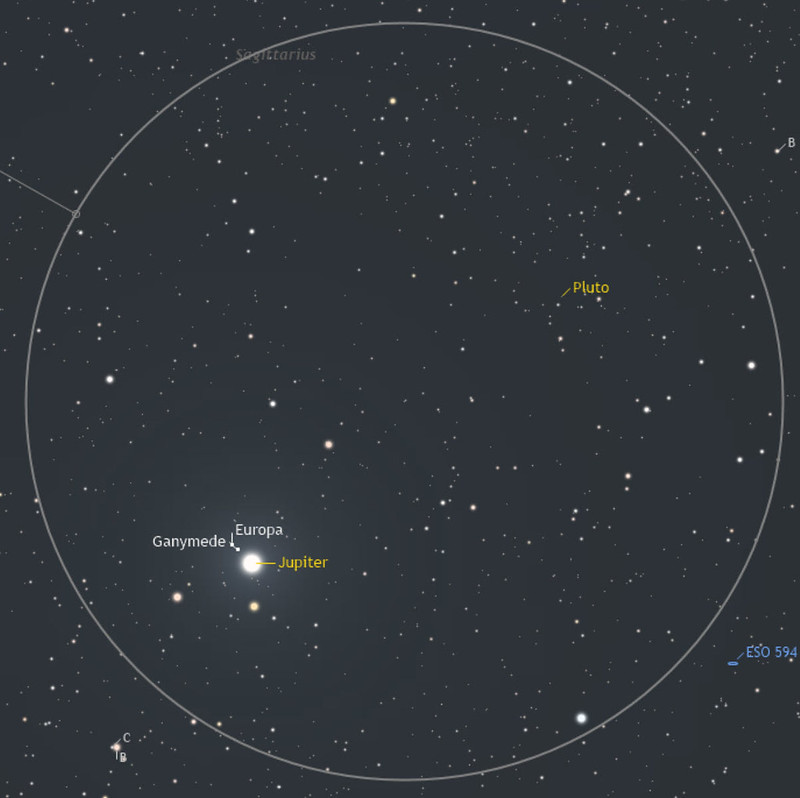 Asteroid: Ceres - Obviously any minor planet would work here, but Ceres is 9th magnitude in a sparse star field and on the meridian an hour after twilight, just 2° from the Helix nebula.  It should be relatively easy to identify from a chart.

The fainter items in the list are well placed to be easily found (Pluto will still be a challenge).  I've already been out and looked at the sun with a 4" refractor equipped with a Herschel Wedge earlier this morning....a single sunspot group on the face.  Also checked off the EArth.  Just now.  So, two down....eleven to go.

Unfortunately, having Jupiter nearby is a real detriment to seeing Pluto since it brightens the background sky and can complicate recognizing the star field.  It doesn't help that for most observers in the northern hemisphere Pluto will be well below 25 degrees elevation by the end of astronomical twilight, and still within the zodiacal light.  Together these things greatly increase the difficulty.

I can see losing enough night vision thanks to Jupiter, that I never find Pluto doing a star hop from this pic. Still, I'm tempted to do it. Planning on using my 8 inch scope tonight, it would be a challenge object located near a blasted flood light.

Pluto is too much work for now.

I somehow have been unable to locate Uranus this year so far.  It is even brighter than Neptune, which this season is easier due to the stars around it.  In the past, Uranus was easier to find than Neptune.

I must confess though, my Newt is on a GEM.  By the time I get to Uranus, the scope has me twisting is some rather uncomfortable positions, and so I might have given up sooner than I ordinarily would have, and my surroundings do not permit much latitude in positioning..

/\ forgive me if you already tried this, but rotate the tube in the rings to keep the eyepiece in a comfortable position.

Seeing last night was nothing to get excited about last night, but transparency was as good as it gets out here while observing last night from the dark desert skies of Portal, Arizona.  The "Solar System Marathon" was order of business #1 and I'm happy to report success in my effort.  I managed to visually observe all 13 objects I listed, and added the gegenschein as a 14th object.  Tonight, back to my regularly scheduled deep sky observing.  Highlights are below:

Pluto:  This observation was made possible with SkyTools 4 Visual's charts and a 20" f/3 telescope.  After using a 10mm Ethos to star hop from Jupiter to the field containing Pluto, I was able to confirm the sighting by matching the view in a 6mm Ethos with the chart from SkyTools.

Uranus:  Located in a sparse field, Uranus was a direct vision naked eye object - M33 was also naked eye at the same time so not surprising. But still cool to see and identify it.  In the eyepiece, Oberon and Titania joined the planet for my observation, but I was unable to confirm sightings of any of the other satellites.

Ceres:  Easily identified as the middle "star" in a line of three 9th magnitude stars.  I was able to observe its motion relative to a nearby 14th magnitude star over the course of about an hour.

C/2020 M3 (Atlas): This was my 10th and final object of the evening portion of my marathon.  Bright nucleus with a large, round coma 4' in diameter.  It appeared elongated on the western end, but nothing I would call a "tail" was observed.

Gegenschein:  Looking up and admiring the milky way stretching across the sky from horizon to horizon around 11:00 pm, the gegenschein was obvious high overhead, just south of the Pleiades.  While brightest here in a large circular patch occupying most of the area between the Pleiades and the head of Cetus, it appeared to extend significantly westward into Aquarius, almost to Mars.  Looking up again just before turning in around 12:30am, it was still easily visible past the meridian.

Mercury:  Returning to the scope at 5:50am this morning, the seeing had deteriorated to the point that Mercury was just a technicolor, sometimes gibbous phased ball a few degrees above the horizon.  Venus was similar, and observations of the moon and its earthshine were limited to a 21mm Ethos in the 20". 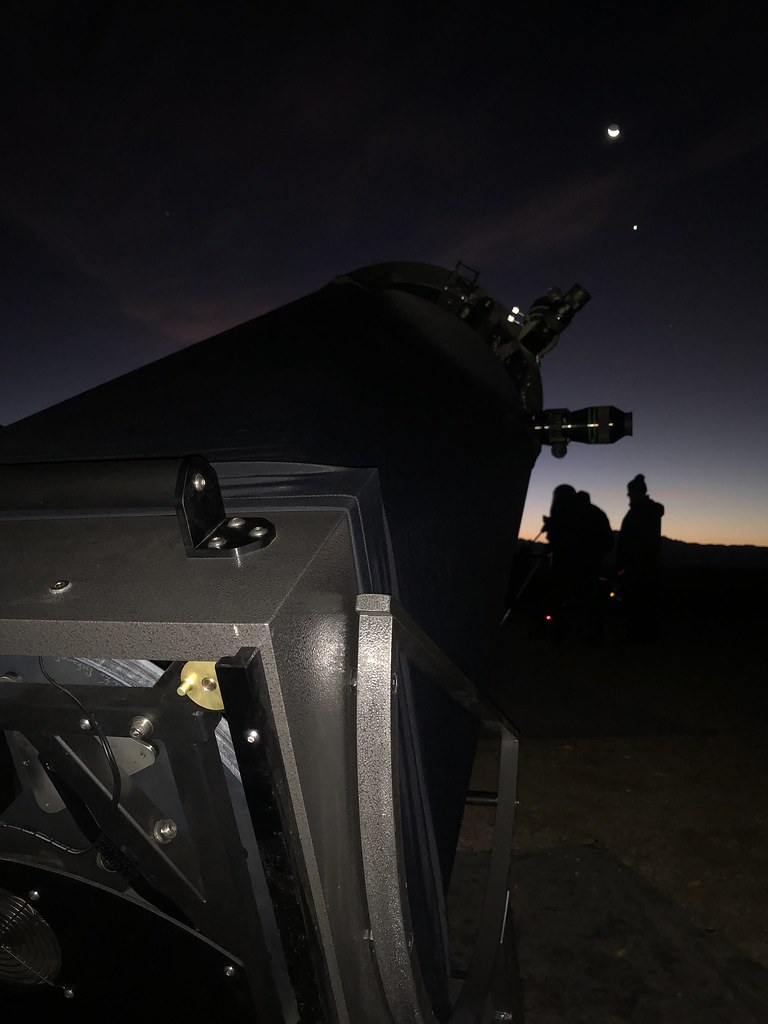 /\ forgive me if you already tried this, but rotate the tube in the rings to keep the eyepiece in a comfortable position.

LOL.  There wasn't a good position left!  and it was pointing too near the zenith and hitting the tripod spreader.  My best solution is either to get outside much earlier (very hard to do) or wait much later (tend to zonk these days).  Eh, I still love what a GEM can do, like at low to moderate powers, allow me to go back inside for (b'room, drink of water, coffee, get fresh batteries, etc.) and not worrying about having to start from scratch to locate what I was in the middle of looking at.  At high powers, well...

Pluto is too much work for now.

I would like to thank an unknown co-observer for once showing me, or at least trying to show me Pluto.

We were at the StarHill Inn in NM in the mid 2000s and he was using a 22" dob under very clear skies.

He pointed a faint source of light.  I have never known if he was right, or if I saw what he  indicated;

but in my mind I have seen Pluto.

I would have never found it on my own. thank you unknown observer

I rented that big Dob for a night several times. And don't forget the warming room with the Oreos!! My wife and I stayed in the "Cosmos" cabin a half dozen times. Absolutely loved Star Hill Inn. Thanks for the memory jolt!

Wow, 22" mirror!  I'm told my 8" can do it, but it'll be hard and I'll need great transparency and seeing... and consecutive nights of comparative observation.  Maybe one day I'll be free enough to do it.  For now, if I can't just starhop, in New York-lit night skies (I once thought a local public school left the lights on their baseball field to the west; I drove by some time later and found that the lights were off- it was New York!!) to something, I won't be able to properly go after catching it.