This is the scope that was on Ebay about a month ago.  The pictures did not make it look very good.  The seller wanted too much for it, and I talked him into selling it to me for 1/2 of what he was asking.  This is the one that had the tube painted flat black.

I knew it would need work, everything looked very dirty.  I was hoping that underneath all that crud, was a Swift, and maybe it wasn't as bad as it looked.  I knew many things were missing from the kit, like the mount and tripod, but it had most of it's accessories.

Well, holding it in my hands was another matter.  It was worse that the pictures showed!  There were many little things that were missing.  I complained to the seller, and without going into the details here, he refunded me 25%. I thought that GW sometimes packed things badly,  the seller's packing job was the worst I have ever had.  When I pick it up off the porch and brought it in the house, I could hear things rolling around inside.  Not good!  The guy also put it some packing peanuts, nothing worth while, and a few crumpled up newspaper pages.  Just a feeble attempt.

The focuser cleaned up nicely, and works smoothly.  The chrome is in great shape.

The tube doesn't have any dents.  In starting to strip off the black paint, I found that some of the scratches were down to the metal.  The tube color is that "pinkish" white.  I'm going to take it, and the finder tube, and get them both powder coated.  Hopefully, it will be a close match to the original color, and if its not, at least they will match each other.

The finder is in great shape, and the lens cleaned up nicely. It is missing the x-hairs, but that is not a problem.  The lens only had two of the three spacers.

The main lens cell and dew shield . . . oh man, what a chore!  The lens was dirty on both sides.  After some initial attempts to take the two piece dew shield apart over a week ago, I had success today.  I had to buy another large strap wrench.  I tried just about all the liquids around the house to loosed the two halves, and they finally gave in to my grunting and cussing.

The lens, to my surprise, cleaned up very nice.  I think it actually looks better than my other 831.  I removed all the dirt and hardened grease from everything, and put it all back together.

Here's a shot thru the lens: 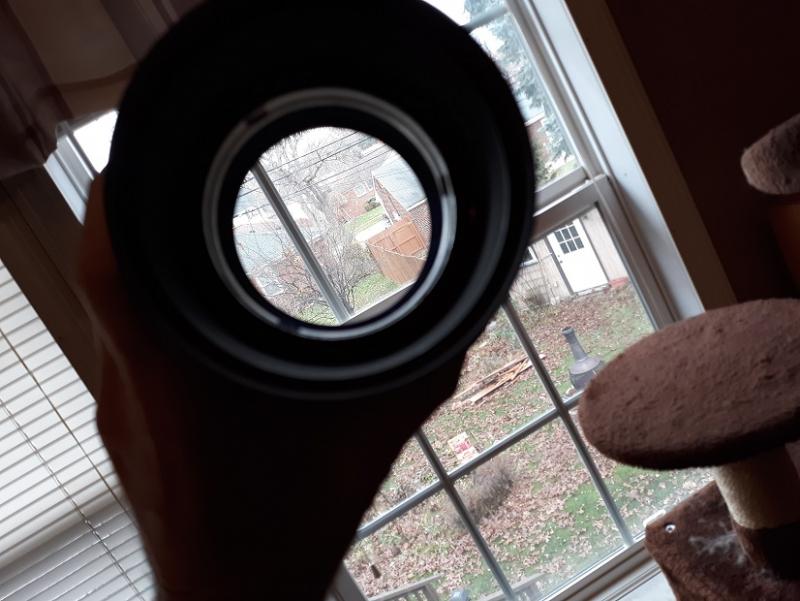 -the picture just doesn't show how clean it is.

I will keep this updated as I continue with this little project.  There's lots to do.

That's the problem with photos. They usually make an item look better than it is.

Congratulations! Two 831s - quite an achievement. I look forward to reading of your progress on this project.

I started working on  the eyepiece box.

I removed all the old green felt, and glued it all back together.  It was in pieces. 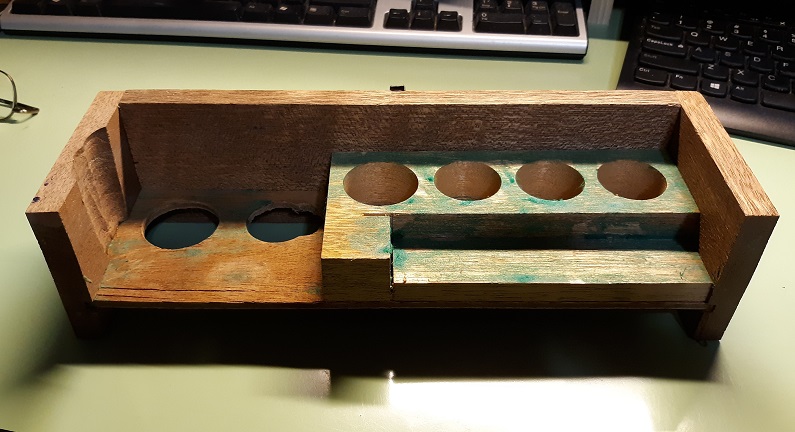 I'll add some new green felt, and it will be good to go.

Very nice...it will be a fun project and a nice save.

Here's what the scope looks like now, and the condition of the wood box: 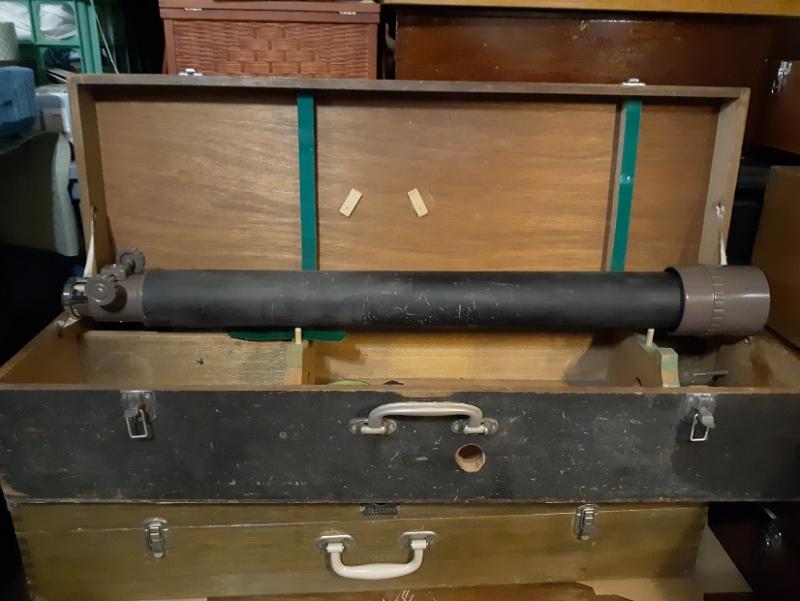 I will be taking the tube, and the finder tube, out to get powder coated.

The box will be sanded down and refinished.

This scope didn't come with a mount or tripod.  I'll be getting an ATCO 80mm x 1200mm today that was going to be parted out.  Depending on the damage that it has, I may part the ATCO out, and then I will use it mount and tripod for this Swift.  I will find everything out later today.

I wonder why someone previously bored a hole in the front of the cabinet?

I wonder why someone previously bored a hole in the front of the cabinet?

They are made that way.  There is a bolt that goes through that hole and locks the mount and hub to the case. 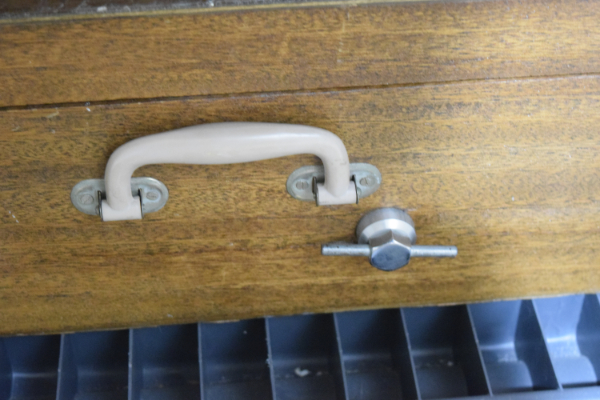 They are made that way.  There is a bolt that goes through that hole and locks the mount and hub to the case.

I misspoke, it only locks the mount.  That bolt also locks the mount to the hub when it's removed from the case and you are assembling the scope.  Dual purpose bolt and you never lose it!

Gary, I have an extra 831 mount head somewhere, PM me if interested.

I took the main tube and the finder tube to get them powder coated.  The color will be very close to the original, they call it Ivory.

They will be done next week.

Glad that you and this instrument found each other. I'm on the road this month but will update the registry when I get back.

I got a call from the powder coaters yesterday.  I thought they were going to tell me my tube was done.

Nope, seems they had a little accident . . . they didn't secure the tube as it was being glass beaded, and it rolled off the table, hit the floor and dented the tube end! 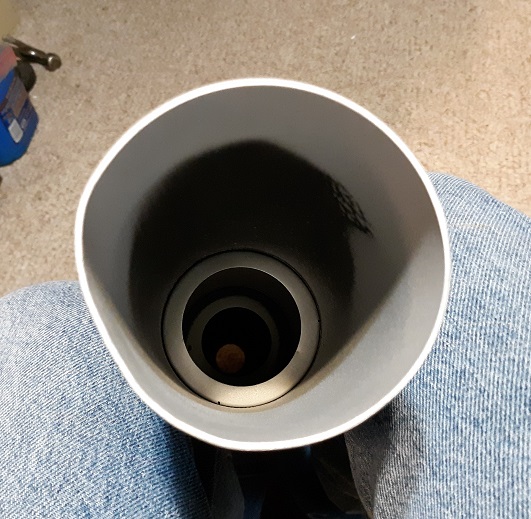 I asked him how bad it was and he wouldn't say.  Why wouldn't he say?

After talking with them 3 times yesterday, I said I'd pick the tube up and take a look at it.  So,  I picked the tube up this morning, and it wasn't as bad as I had envisioned. I thought it was going to be much worse.

I made a wood tool, to "straighten" out the curve, as seen in another thread: 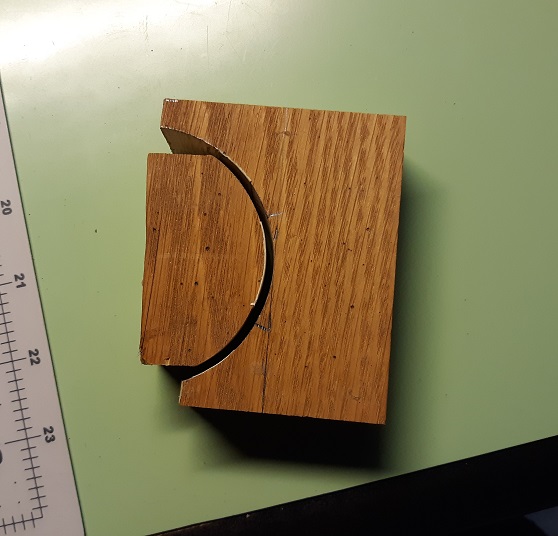 And not to my surprise, it worked!

I have now been able to screw the lens cell off and on the tube many times. 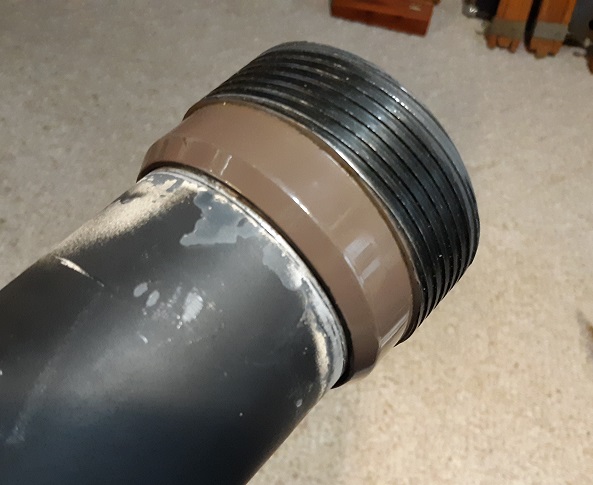 Next week I will take the tube back to them, and from what the owner said, they may do the powder coating for free.

Ken, when you add this one to the registry, you can describe it as an almost complete refurbished kit.   sn 643093