I hope this post finds you and those close to you well.

As some of you know I was keen to make the most of tonight's clear skies to see could I spot the dust storm on Mars. Unfortunately, I found it quite difficult to pick it out, but that did not stop me from sketching the 'Red' Planet again.

This is my second attempt at it, and I tried a different technique tonight. Before going out, I used a compass and pencil to draw several circles on a page. I shaded the circle in using a 3B pencil, and then smudged the graphite using a blending stump. Then at the eyepiece I added the shadings that I observed using a 2B pencil, and I recorded where the South Polar Cap (SPC), and the North Polar Hood (NPH) were positioned.

Once in inside I used an eraser, and eraser shield to create the SPC and NPH. And I used the blending stump again to smudge the dark markings that I made at the eyepiece. I then scanned the image into GIMP, and colourized the planet.

I found this a much better approach than my previous attempt when I simply added dark markings to a white circle. Needless to say, I'll use the new technique going forward.

In terms of the observation itself, I found Mars to be smaller than my previous viewing (5th November). The SPC and NPH seemed smaller too. Consequently, I had to work much harder to identify discernable markings on Mars tonight. I felt Sirenum showed most contrast against a rather yellow/white(ish) planet this evening, and when comparing my sketch against a Mars Map on 'StarryNight 7' I believe I may have observed Olympus Mons - could this be right though?

Other details from tonight session include:

As always many thanks for taking the time to read the above, and your comments and feedback are always welcomed. Most importantly, very many thanks to all those who have submitted sketches on Mars over the past while. Your sketches and reports really helped me to make the most of tonight's session. Also, a special thanks to Paul for the encouragement to get there and draw the Planet tonight - it really is a wonderful experience, and it certainly makes you look harder at what you see. 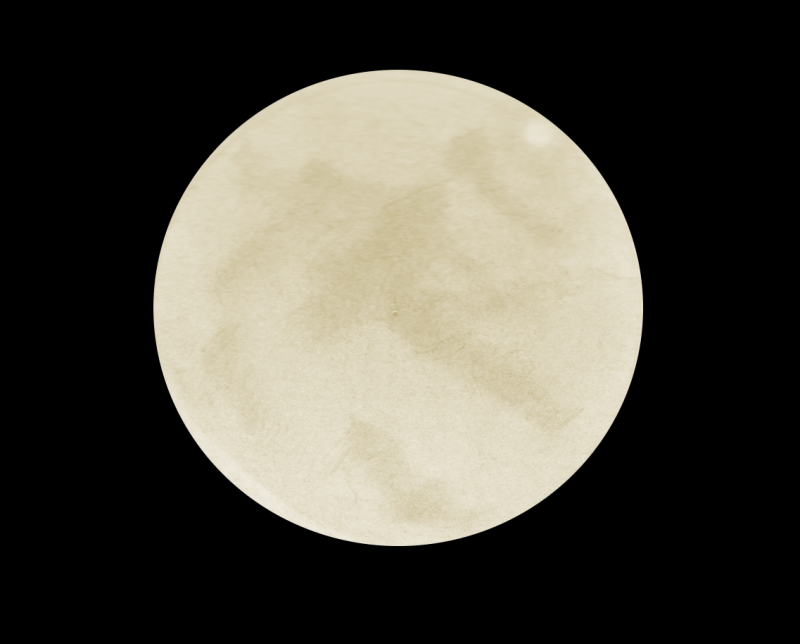 That is excellent Darren and thank you for telling us how you did this! Before the planet recedes much further I would love to try using that technique. Here in the desert seeing conditions in the early evening hours are usually quite poor. Given that we won't have a favorable apparition for many years I'd better act fast.
Clear skies,
Randolph

This is a bit of a guess but this is what I think I am seeing here.

It looks to be a good Mars sketch in any event. 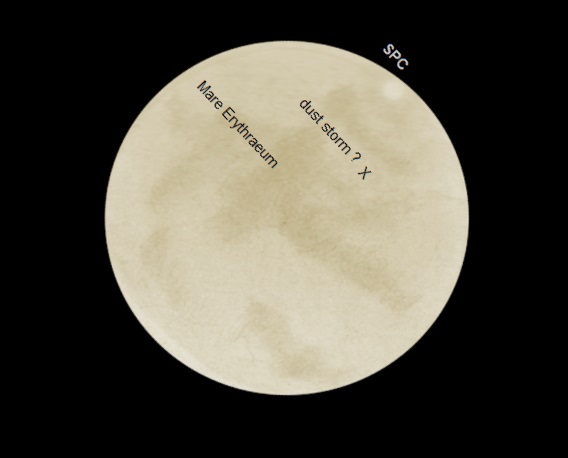 Very many thanks for your comments and feedback. And a special 'thanks' to you Frank for annotating the sketch. Based on recent submissions made by the likes of Mikokwa, dweller 25, and Chris' description of an 's-shape', I think you're right about the position of the dust storm. When I observed it last night I was looking for it in a more NW direction, not taking into account how it might move across the planet. So even if I unintenially included it, I'm delighted to read that it might be there.

Thanks to all those who liked the sketch, and I'm looking forward to seeing, and reading more reports on the 'Red' planet from those who sketch on CloudyNights. And in that note, best of luck Randolph with your sketch, I'm sure there are better ways to sketch the Martian surface, but I was happy with the progress I made over two sketches with the approach I'd taken last night.

Hi Darren- that's a very good observation, keep at it!

Very nice result. My second attempt of Mars was very far from it...

a very nice observation and scetch - like your kind of drawing

Yes, Olympus Mons would be on the disc when you observed. I think you've done pretty well drawing the albedo features in your sketch.

I don't know what map Starry Night 7 uses for Mars, but some Mars maps can be quite difficult to match with what you see through the eyepiece.

If you get yourself a recent map of Mars (there have a been a couple of really good ones produced this year around the time of opposition) and put it into WinJupos (or Starry night if you can change the Map?) you can get some very accurate simulations of the surface features visible.

Combine that with the 1957 Mars map by Shiro Ebisawa to give you the names and you're fully armed to identify everything you see through the eyepiece.

Fine sketch of Mars (From Dublin)

Hello Paul, Sasa, Michael, Chris, and Tom. Very many thanks for your comments and feedback. Chris a special 'thank you' to you for your recommendation regarding Martian Maps...I'll definitely check those out as I don't believe the Starry Night map is comprehensive.

And thank you for those who have liked the sketch...always appreciated!

Question: How do you rate the software Starrynight 7 as compared to say Stellarium?

Nice sketch and careful observation.  It would be hard for anyone to recognize the classic albedo features with this dust storm obscuring parts of the Martian surface--you've done good work.  I like the technique you tried--keep experimenting with what works.  Sketching at the eyepiece in the dark and cold is hard enough as it is.

Frank made a good guess about the dust in your sketch but instead of M. Erythraeum on the left, that's Solis Lacus with M. Sirenum on the right.  Olympus Mons is close to the CM to the north.  Here is a simulation from WinJUPOS about halfway through the time you posted for your sketch. 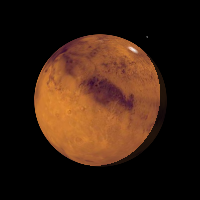 Very many thanks for your messages, and comments. How do I rate Starrynight7 vs Stellarium? Great question Trent! I'd rate both of them quite good. I tend to use Starrynight7 more though. Without going into too much depth, I find it more user friendly than Stellarium. For example, I feel the information is presented in much clearer / easier way to read. I'll send you a more detailed response through the messaging system if that's OK?

Clear skies to both of you.