Who made Meade Starfinder mirrors?

I recently acquired a neighbor's 8 inch Meade Starfinder to fix up and sell for her.  I used to have an identical one back in the day.  I've noticed that this one along with the other one both  have a very good set of optics.  Yes the overall design is a mess and modern versions of these scopes are much improved overall.  These were available in about the mid '90's as I recall.

I also run an astrocamp every summer and have had a few dozen 8 inch dobs go in and out the doors at the astrocenter. I've done extensive testing of these modern budget 8 inch dobs and only a very few have had optics as good as the 2 Meade Starfinders as I see it. So while the modern Chinese dobs are better made overall they tend to lack the optical quality of the older Starfinders in my experience.

I once heard that some of those Meade Starfinders had mirrors made by Terry Ostahowski.  I have no idea if this is true but whoever made the 2 I have knew what they were doing.  Does anyone know anything about who made these older budget dob mirrors and where?  Thanks..

Starfinders were made by Meade in their shop in LA, Irvine I think.

The 6 inch and 8 inch Sonotube Celestron Starhoppers were made by Celestron in Torrance, CA. They had that unique curved back mirror.

The larger Celestron Starhoppers as well as all the Orion Sonotube Dobs were built by Discovery Telescopes, Bill Larsen doing the scopes and Terry Ostahowski the optics.

This an 8 inch Starhopper mirror in its cell. 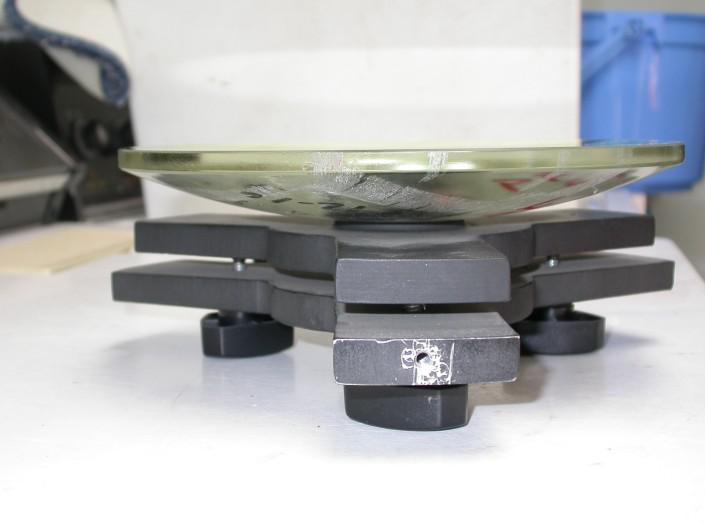 These are two early Bill Larsen-Terry Ostahowski scopes. The one on the left is a Pirate Instruments 8 inch F/6, my first Dob and very crude. The one on the right is my 12.5 inch F/4.06 which lives on as a Truss Dob. 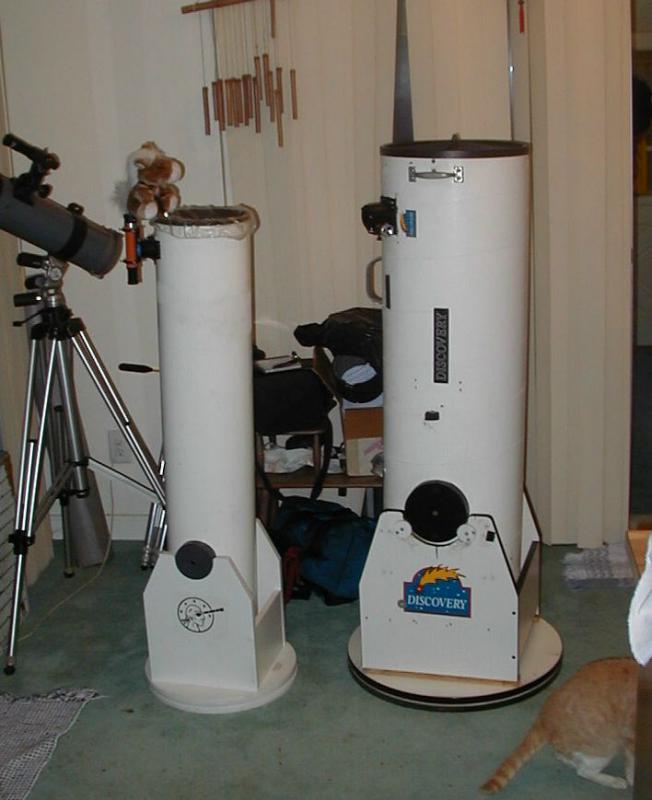 No the Starfinders have a normal primary but are glued to a particle board and heavy counterweight with no ventilation hence the design flaw...

I've heard that suggested. The thing is that at the time the Celestron Sonotube Starhoppers were in production,  there was no 6 inch SCT and I believe C-8s have mirrors larger than 8 inches.

Hate to use that on a cold nite with dropping temps. Scope makers should known better.  But every Meade 8" F/6 mirror i ever owned was very good and that was around 10 at least over the years.

I bought a 8"f6 Meade Starfinder at a gun shop, built a ply primary cell, added a fan for ventilation. I also built a BB rocker/cradle mount. The optics are very good IMO. Great views, but it's heavy!

Actually, the 8” Starhopper mirror is 210mm in diameter- I moved one into a truss structure and measured it. Great quality optics by the way.

Is that the size one expects for an SCT primary?

I have the Starfinder 8. The optics are great.

In addition to my 8"f6 Starfinder for $30 I also bought a 8"f6 Meade Sonotube with an aluminum primary cell. One of my brothers and I built a dob mount for it. It also has very good optics although it could use a recoat.

Those particle board cells such as was in my Meade Starfinder appears as if Meade was trying to eliminate any circulation. And did a pretty good job of it.

Actually, the 8” Starhopper mirror is 210mm in diameter- I moved one into a truss structure and measured it. Great quality optics by the way.

Is that the size one expects for an SCT primary?

That was the diameter of my primary mirror in my old LX200 SCT.

IIRC, Meade started out using Coulter before they had their own optics shop set up.

I had a 10" star hopper in around 1998.  Cardboard tube, particle board cell, 3 blobs of silicone. Plastic focuser.  The spider was the highest quality of mechanical parts and it was just average.

In fact it was my first telescope and I became interested in ATM and pushing glass after that thinking maybe I could make an even better scope.

I made a bunch of telescopes, but could never beat the views through my Meade 10" F4.5.

I remember one night where seeing was extremely good and I saw detail in Jupiter's cloud belts that I have never seen in any telescope since.  Swirls and festoons, it looked like a tiny Hubble photo, popping in and out as the seeing changed.  I was using basic Kelner eyepices and a shorty barlow.  Cheapest options available.

I later switched to SCT's and have never had a view like that again.  Good, but never like that.

Just that one night everything lined up perfectly.

Did I mention I now have a 10" dob on order? 8" SCT may be going into retirement.