15 replies to this topic

1970 was an exciting year. The spirit was high, and it was the year of technology. Osaka expo was held, one of the first international expo in Japan, which remembered as a symbol of the success of postwar recovery. 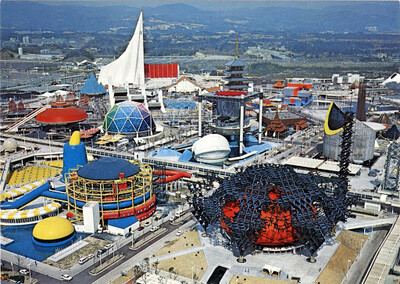 Ozuma came into fruition around the time when expo happened. Many employees at the time were mid-20s, and it was a fearless era. The intention is simple; to make a scope that no other has seen before: a complete original design which is really different from the usual run of the mill telescopes. 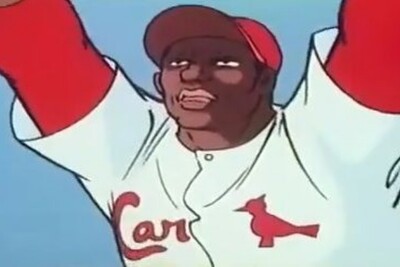 “Ozuma” name itself was taken from the Chunichi Dragons' ill-fated smasher from baseball animation Star of the Giants (1966-1971). Baseball itself is huge in japan, being one of the biggest national sport.. 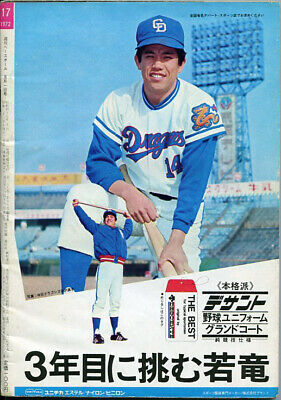 Chunichi dragons itself is a professional baseball team based on Nagoya, playing along yumiuri giants, yakult swallows, hanshin tigers on others on the central league. 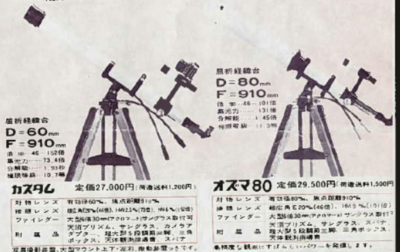 The scope itself appearing on 1972 catalog, along with the custom 60. Custom 60 is one of the longest running vixen refractor design. At 60mm f/15, it is a classic vixen design which already on drawing board since 1968.

Side by side, it’s almost alien compared to the usual long refractors of the era (custom 60) 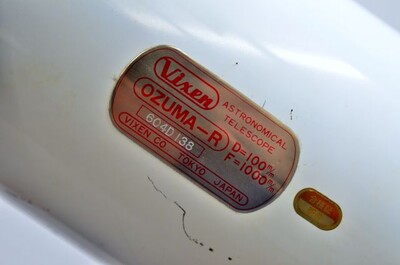 It is one of the two scopes in series, the other (Ozuma R) being a newtonian reflector.

The name is fitting: the long front part instantly reminds oneself of a baseball bat.  The tube itself has a stepped down design which goes down from 80mm, to 60mm tube. Although in reality the front tube itself is much bigger at 100mm! Not man yscopes has such stepped down design..others is like a palomar/skyline/atlas 60 which is much more sleek than ozuma, although ozuma is different as it doesn't have a separate dewshield. The rings were only supplied for holding the back part, making it a front heavy scope. It is a hybrid of Titan (80/910) with Custom (60/910mm) series, caught inbetween. 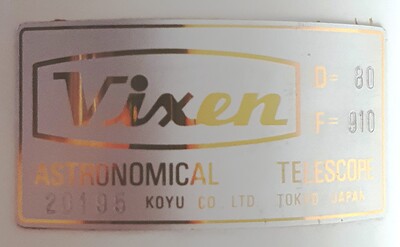 The label is silver and white, Bearing the name both vixen and Koyu. It  was a transitional period for vixen, and ozuma still comes with old mount which has the even older vixen logo (Ozuma’s mount is on the left) Pics: galakuma's web 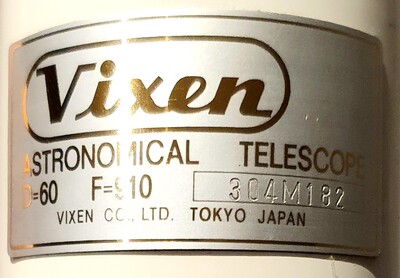 The label is almost similar to the custom 60’s label, but the custom’s doesn’t have koyu name mentioned. The knobs are the only features on the front part: the tube has becoming a dewshield, and the lens is held by the three screws. It’s rather pretty, and a custom one. It reminds me of Zeiss telementor which has screws on the side to hold the cell from outside. But instead of screws, the knobs are actually made outside for making easy collimation, instead of just holding the lens cell. This is pretty unique. The cell is tight, there’s not much room for the sides. It has no engraving and the size is 83mm across. The lens is held together by a spacer ring at the front, instead of the back. Ozuma has three baffles, one on front part, one on the back, and one at the end of focuser tube. The focuser has metal wheel which has crisscrossed pattern instead of usual parallel grip. Compared to vixen custom, it has similar focuser design. The ozuma's casting finish is much more smoother, and the front part has same stepped down design resembling the one holding the middle of the tube. Both has the eyepiece finder placement on the right, instead of middle/left. When extended, the custom’s focuser tube is much longer, but the ozuma has some guard rail on the sides. The tube is held together by the big flanged part. At first I thought it was Bakelite, but it was finished aluminium. The tube is held by long grooves inside. So although the 60mm tube is actually similar to custom’s for example, the grooves is much longer than usual inside, presumably to hold the much bigger front part. There’s three custom raised knobs to hold the the tube together on the front. The design make it possible to take down the tube into two parts, make it pretty easy for transport. Some scars, showing the tube. Not sure how it’s happened nor if it can be restored? Mounted. The design somehow reminds me of Zeiss’ with the lack of dewshield, yet it is different on it’s own as a whole. The front heavy aspect is the major flaw, but it is manageable as the tube is not heavy. An ambitious design.

Optics wise? at f11 there's more colour than usual f15, alas it's not like zeiss-like. What an amazing rare scope! Thanks for the photos and info!

Any idea why Vixen designed it that way? It seems pretty complex to manufacture?

What an amazing rare scope! Thanks for the photos and info!

Any idea why Vixen designed it that way? It seems pretty complex to manufacture?

It is intentional. The policy was to make a telescope that looks really different than others, and I think they pretty nailed it. Vixen exist as koyu since 1950s, but only becoming vixen on July 1969. So as a relaunch, I imagine the company was off to a fresh start, so there's a lot of experimentation for new design.

I think it's partly distinctive. for example the custom has camera on finder directly. This is pretty different than the usual setup which has a camera on separate ring. The 80mm/910 titan has a dewshield which has a white band on the black dewshield, similar looking like vixen HR eyepiece which is really distinctive.

Here are some write up about the scope by galakuma:

I've wondered about the variations that Astro Optical & Towa used to shorten their 3" F15 refractors for the wood cases:  OTA tubes that collapse a bit at the focuser end; focusers that thread off with a metal cap that threads on; lens cells that thread off -- these pieces have a slot in the styrofoam per model...

Was there some shipping limitation on the case (& its outer box) size?  Maybe it was cheaper in shorter cases?  When I picked up my Tasco 10K (Towa 339) in 1978, it was in an over-sized cardboard box with padding.  Its focuser was off, and had the metal cap at that end -- shortened the case (& box) by maybe 6"...

Galakuma joked that "Vixen did it first!" comparing it to BORG

. To be honest I'm not sure about vixen wooden cases, because it's pretty rare. I know that early gemini has one though.. Most of my vixens always comes in boxes. There are not many pictures of the scopes from early1970s..which is pretty sad because vixen launched a lot of original designs. I think the take down is a secondary effect- vixen didn't really riveted their scopes so threaded on makes sense. It's more likely that it comes as a result of experimentation of that front tube.

As I mentioned, I can actually thread the 60mm custom onto the ozuma- the tube is exactly the same width, but customs' thread is much shorter. I did play around and mounted it a bit, but the thread size difference worried me from wearing off the threads, so I stopped. It is odd that they stopped it down to 60mm-it's a pretty big difference and pretty stark contrast when they designed the front part so much, yet pairing it with ordinary 60mm back part. But imagine at the time if vixen actually chose modular path with interchageable kit, it'd be revolutionary.

Theoritically, if I can fit in a 80/1200mm cell into it, and thread it with some other suitable vixen 60mm body, I could make a hybrid with this.

It is a coincidence that the cap is actually really similar to the FC60's. Plain featureless cap which flex a lot. I don't rally like both of them, and both slips easily.. 
Also tagged with one or more of these keywords: refractor