They are getting close!

I took this afocal iPhone photo through my 80mm Orion ST80 refractor and a 30mm Ultima on Tuesday night.

I had them both in that scope with a 20mm SWA eyepiece. You could just barley see the rings. I'll have to try my N 13mm next time for more magnification.

Yes. I took about  50 pictures and pick best one then deleted all. Cant wait next week take other picture for compare and will try take picture in my telescope at low power around December 21st.

Yes. I took about  50 pictures and pick best one then deleted all. Cant wait next week take other picture for compare and will try take picture in my telescope at low power around December 21st.

Depending on scope and eyepiece combination, you can already get them both in the eyepiece at low powers:

Around the 21st, you'll be able to get them both at high powers!

Looking ahead at the January Sky & Telescope, Mercury will be joining the Jupiter/Saturn party on January 9-11.  The three will be close to 2 degrees of one another.  However, they will be very close to the horizon at dusk, so timing, clear skies and binoculars will be needed!  Still a fun little challenge to look forward to!

Tonight Jupiter and Saturn were well framed with my 26mm Plossl at approximately 40x.  There was enough field of view left so the planets weren't in the poorly corrected edge of the field.  Three Gallilean moons were visible, as was Titan.  I was able to observe for a bit more than an hour before they sank into our neighbor's tree.

Here's an iPhone shot that I took on Tuesday evening.

This photo was taken on Thursday evening.

Here's one from last night.

Really getting interesting now!  Just came in from observing them and they are now closing up. I had both of them in the FOV of my 19mmPan at 60x. Clearly seeing Jupiters bands and moons and Saturns rings. Should be really a great sight over this week into the 21st!

No Jupiter or Saturn.  Mars is burning through the clouds though.

Tonight Jupiter and Saturn were well framed with my 26mm Plossl at approximately 40x.  There was enough field of view left so the planets weren't in the poorly corrected edge of the field.  Three Gallilean moons were visible, as was Titan.  I was able to observe for a bit more than an hour before they sank into our neighbor's tree.

That tree has to go! 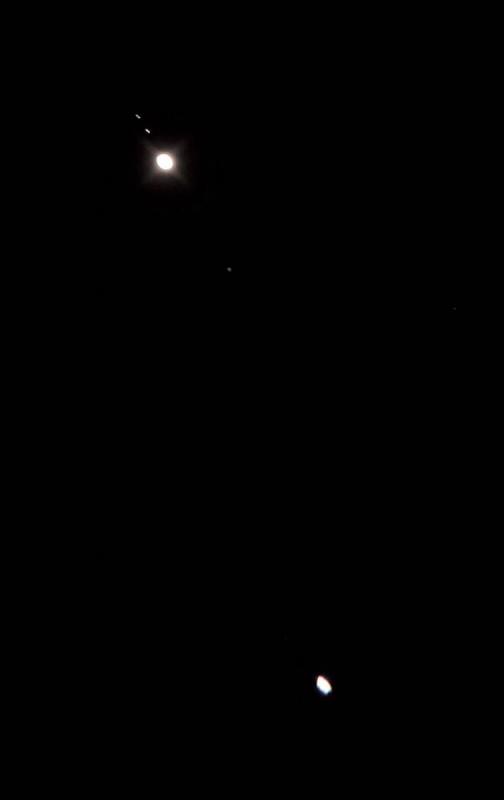 Quicker shutter speed, does not show moons, but you can see Saturn has rings instead of just being oblong: 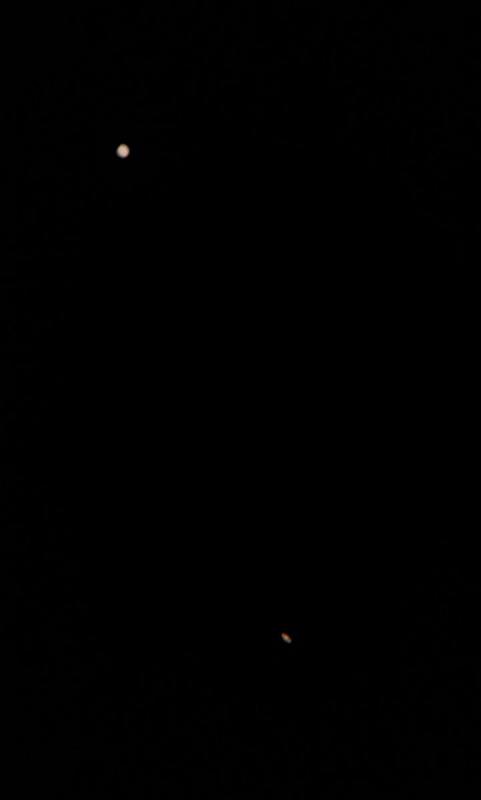 Yesterday evening I used my phone before cloudy show up. Both fit in my telescope at 23 power.

Had a break in the cloud cover to capture the moon and the planets on Dec 17.

Took a look with my Sky-Watcher ProED 100 mm f/9 last night around 18:00 EST. There were some clouds, but I was able to catch Jupiter and Saturn in the gaps.  They were just comfortably within the 0.61º FOV at 100x using my 9 mm DeLite. The forecast for the 21st looks like it might be sort of ok, with some clouds.

The crescent Moon made a nice appearance last night too.

Yesterday, I spotted the thin moon around 4. I used it to align my CPC 800. Using my new 36mm Baader eyepiece (56x), I was able to see both Jupiter and Saturn (no moons) in the eyepiece before sunset.

Around 30 mins after sunset, the moons started appearing—4 total. Io was not visible, and Titan showed up a bit later.

I kept the whole group in my eyepiece and watched both planets until they drifted behind the trees around 6:00.

From the park by my home I was joined by John Martinez as well as Ralph Junius, his wife Sandra plus 6 of his granddaughters. Two of my volunteer friends, James and Gary, from the World War II Museum also participated. The park right now has closely cropped grass, virtually like a putting green so this was a very nice surface to set up a telescope.

I used my Orion ED 100 f/9 (focal length 900 mm) and Ralph brought and used his TeleVue Genesis. There were no other telescopes. I brought numerous cases of eyepieces so that I could use what I wanted plus have other eyepieces for "non-certified/health unknown guests to use. As it turned out all who wanted to look thru my scope all looked thru the same eyepieces. (Total of 6 people including me.) I used my set of Baader Hyperions and in succession kept upping the magnification until Jupiter and Saturn could no longer fit in the same field. I started with the 31 mm Hyperion (29x), then on to the 21 mm Hyperion (43x) then 17 mm (53x), 13 mm (69x) and the final one to fit both in the same field was the 8 mm (112.5x) which with this scope has a calculated .64 degree field. The next eyepiece down is the 5 mm and it yields 180x and a .4 degree field. I did not really try to see with both Jupiter and Saturn could be squeezed into the same field with this one, but if they could the image quality at the edge would likely not give a good view. The eyepiece was used to show Saturn at higher magnification.

FYI - I have numerous eyepiece sets including TeleVue Naglers and Panoptics, plus Delos.  Also ES 92's, 82's and 68's, as well as all of the Vixen LVW's.  I know the Baader Hyperions are not considered top tier, but in my refractors with longer f/ratios (f/7 and slower) they are great.  No complaints from me.  Especially like the long eye relief.

We had a nice view and as close as Jupiter and Saturn were on Thursday night, they will be separated by about 1/4th the separation distance on Monday. That will allow for a much higher viewing magnification.

It was relatively cold, about 50 degrees, but very light wind, so that was nice and the right clothing made the temperature a non-issue. The humidity was also low so that was a plus.

Hot dog! Finally a partly cloudy sky. Jupiter and Saturn now fit in the field of view of a 10mm Baader Classic Ortho in a 10" f/5!!! Never saw anything like it. The weather forecast isn't good for the weekend, but the Dob is ready!!! 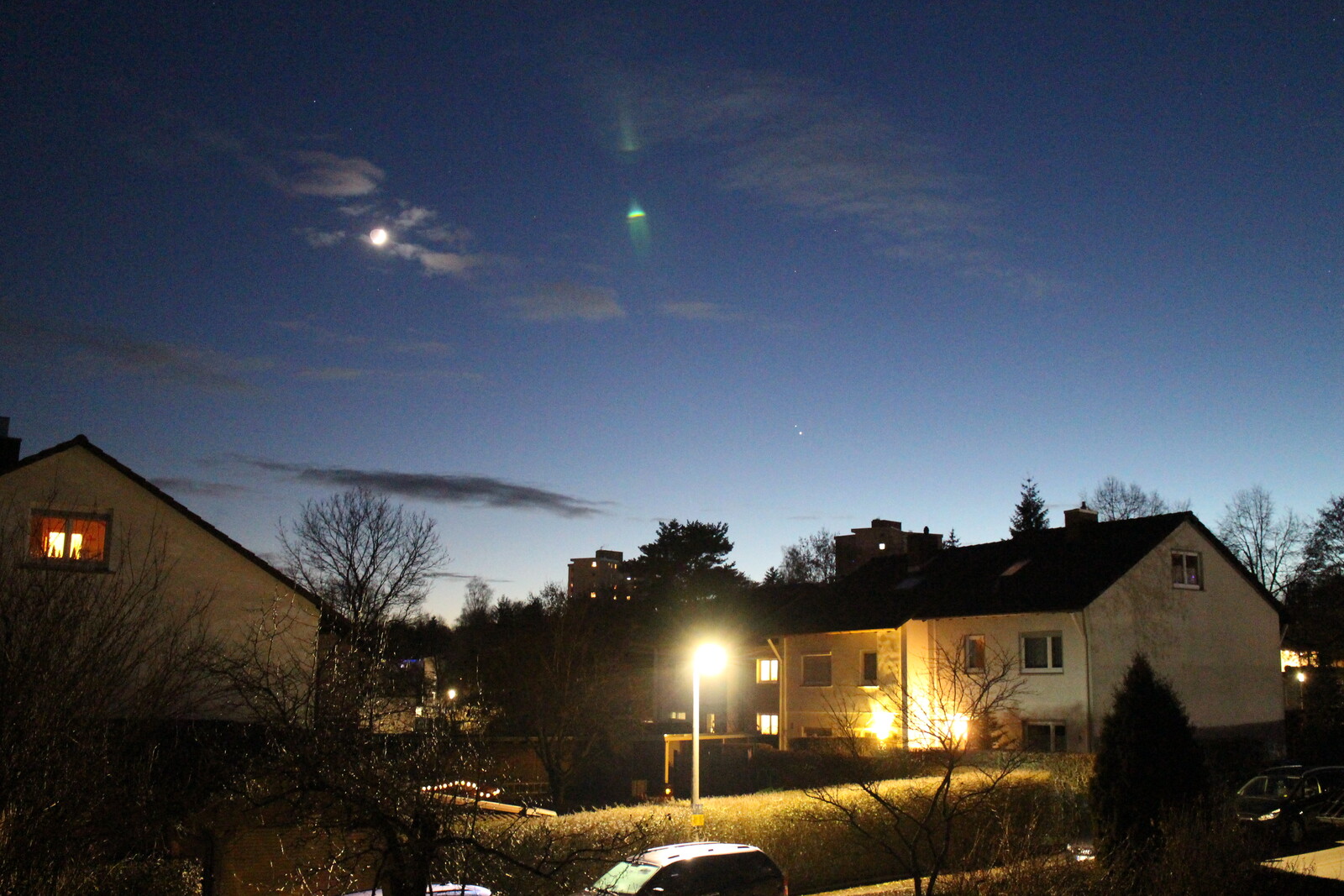 Had a great naked eye view of Jupiter & Saturn near Luna. The Moon was a very thin Crescent with a lot of earthshine near the two planets. Very nice view it was. Some of the included pics here are reasonable likenesses

. I just regret that because of a snafu in the calendar & my own stupidity I am out of a needed medication and could not drag out either telescope last night, & tonight is cloudy. Of course I am in worse shape, I won't be well until tomorrow. Its overcast now with patchy drizzel now. No scope going out, nothintg to see.

I got my own iPhone shot from a couple of days ago of the M/J/S conjunction. 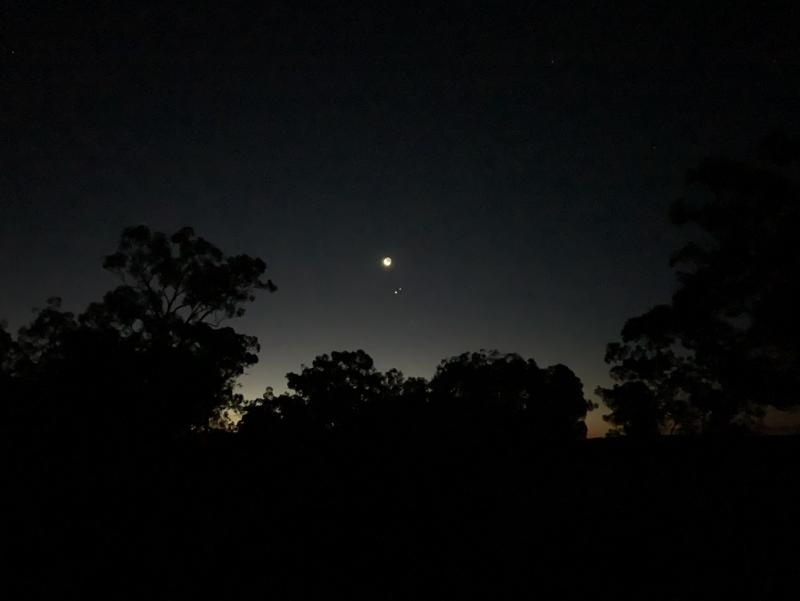 I had a nice view in the AT92.  They are framed about perfectly with the Baader zoom at 8mm.  Attached is a single frame with a T3i and TOA 1.6x extender. 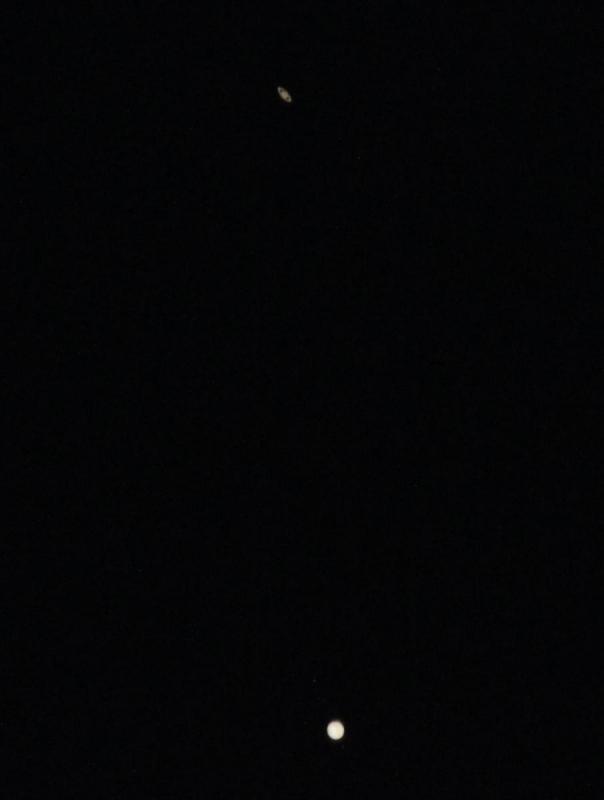