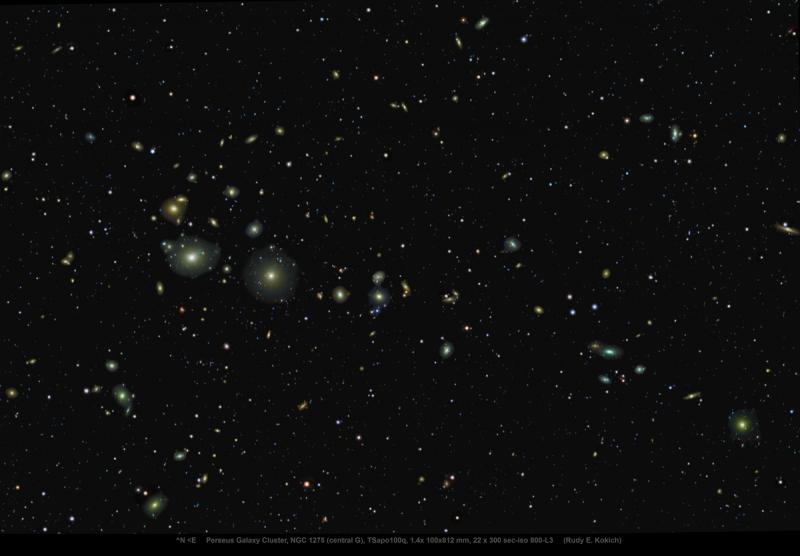 The Perseus Galaxy Cluster (Abell 426) is one of the nearest galaxy clusters containing 190 members which are gravitationaly bound to the massive central galaxy NGC 1275. The cluster's angular size is several degrees, lying at a distance around 240 million light years, and receding from us at 5,220 km/s due to the expansion of space. Although inconspicuous in visible light, it is one of the brightest objects in the night sky in the X-ray band due to accretion around numerous central galactic supermassive black holes and interactions between strong magnetic fields with an envelope of hot, ionized plasma heated to millions of K.

On larger scales, the Perseus Cluster is part of the Perseus-Pisces Galaxy Supercluster which is one of the largest and most massive objects in the Universe. It contains over a thousand gravitationally bound galaxies subtending over 40 degrees on the night sky.
https://upload.wikim...rseo_Piscis.gif

The supercluster is, in turn, a part of the Perseus-Pegasus Filament of galaxies which extends over a billion light years.

NGC 1275 is the brightest and most massive galaxy in the Perseus Cluster, and situated near the cluster's center of gravity. It is a giant elliptical galaxy approximately 181,000 light years in diameter, with a stellar mass of 243 billion solar, about 4 times greater than the Milky Way's (~61 billion solar). The galaxy is a complex structure whose properties are determined by 1) a central supermassive black hole with an accretion disk of around 800 million solar masses, 2) a small foreground spiral galaxy approaching the main galaxy at 3,000 km/sec, and merging with it in a moderate burst of new star formation, 3) long, thin filaments of relatively cool hydrogen gas held intact by strong magnetic lines, and 4) infall of thousands of stars and globular clusters which "condense" from the surrounding intergalactic medium, and descend like snow upon the periphery of the main galaxy. NGC 1275 is a strong source of radio waves (radio source Perseus A) generated by synchrotron emission from the magnetic fields around the central black hole's accretion disk and polar jets. It also manifests a quasar-like active galactic nucleus of the Seyfert 1.5 type characterized by emission lines of highly ionized gas and strong X-ray emissions. 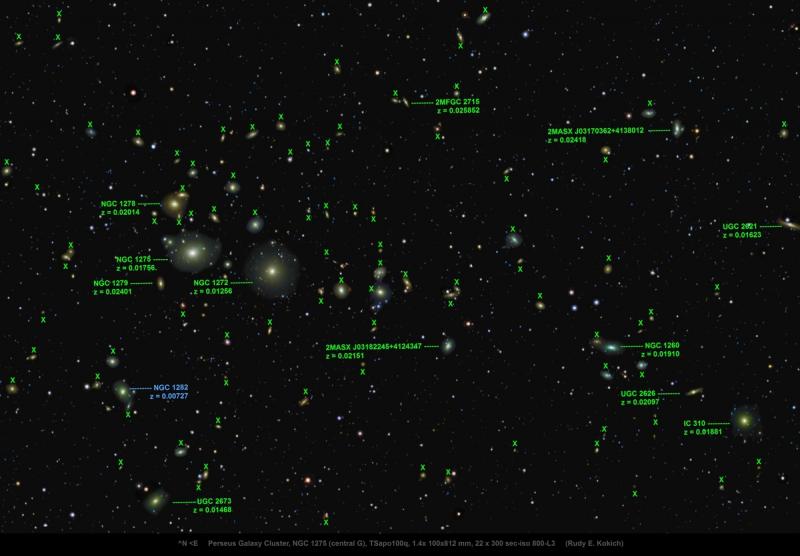 Thanks for sharing this. I don't know why there are such huge artifacts in your image. It might be my screen + the reduced quality of images here on CN. Do you have a full resolution link to share?

The other thing is, did you use a tele-extender? Why do that? you made your life a lot harder with this.

I fixed all the defects I could identify with my eyes and my monitor. This is the 4th reprocess, and the image will just have to pass or fail such as it is. New larger version here:
https://www.cloudyni...alaxy-ngc-1275/

Yes, for small objects I have to use the Sigma apo 1.4x tele-extender. My TSapo100q's focal length is only 580mm which is insufficient for most galaxies. The extender increases FL to 812 mm, and I still have to crop many images 50-25% linearly to achieve desired scale. This extender is a perfect match for my TSapo65q, TSapo100q, and the Canon 200mm f/2.8 lens. It introduces no visible aberrations except for slightly elongated stars in the corners of the field - easily corrected with StarTools. I also have a Meade 8'' acf and an AP 0.7x compressor (200x1400mm) for smaller objects, but very much prefer refractor images, even when cropped. As for inconvenience, I have led such an interesting life that using a tele-extender is no trouble at all, so long as the autoguider behaves. 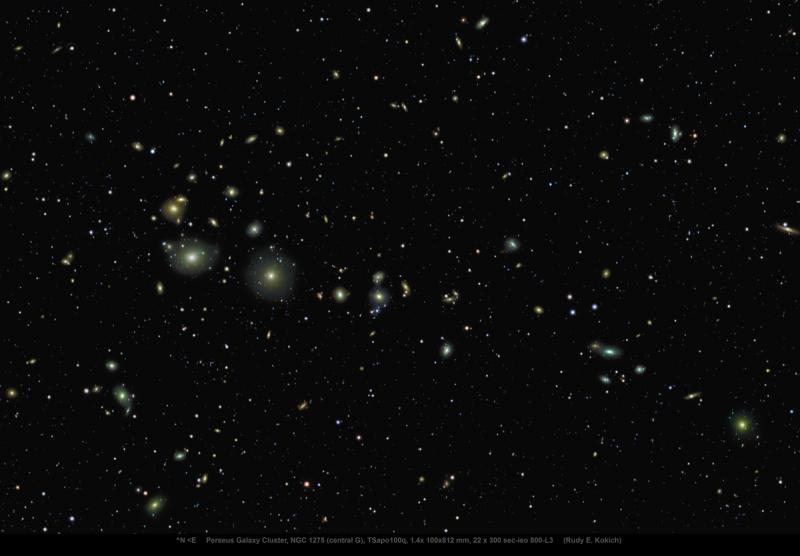 Sorry. I do not mean to be annoying but I can still see the same artifacts and the background is totally clipped. I guess it is just the jpg quality or my screen or something. If everyone else is seeing it good then it has to be something with me.

Yes, I agree. My previous post edited with the new image.

Sorry. I do not mean to be annoying but I can still see the same artifacts and the background is totally clipped. I guess it is just the jpg quality or my screen or something. If everyone else is seeing it good then it has to be something with me.

No, it's not you. I see the same. Still a nice image and effort!

Image looks great to me now.  Nice job.  I mean to do a 4 panel horizontal mosiac with my C9.25 of this area.

For inspiration, here is an image which goes quite a bit deeper than mine:

If you can include Ha subs, your telescope will probably reveal hydrogen filaments in NGC 1275. See this APOD: