Your Best " I can't believe that's visible" in Binoculars Moments?

35 replies to this topic

I was most surprised seeing the full extent of the California Nebula with just 10x50 binocs, totally without any filters, right from my backyard some years ago..

I was most surprised seeing the full extent of the California Nebula with just 10x50 binocs, totally without any filters, right from my backyard some years ago..

I'm always amazed to see smoke trails from meteors in my 10x50s. Coolest thing ever.

Yes, they can be very impressive if they encounter a region of very high winds aloft. I've seen more than a few over the years. Most commonly, once they appear you can see them move rapidly off in whatever high altitude wind takes them. But there are those rare ones that simultaneously encounter different wind velocities at different altitudes and seem to writhe and change shape almost moment-to-moment like some manner of celestial snake! Then there are some that do this same sort dance, but in slow motion if the trail should last for an extended period.

I think recently, comet Neowise surprised me in my 10x50 binos.  Not that I could see it, but how WELL I could see it.  It filled the field of view with a dazzling nucleus and tail that stretched forever.

Same here! I first saw it in my 10x50s from just outside my house. I live in Montreal, population 1.78 million! That's a lot of light pollution.

For many years I've been frustrated that I could only see the open cluster, called Melotte 111 or the Coma Star Cluster in its entire, 8.5º span using only small, wide-field, low magnification binoculars ...  nice, but not stunning. However, the cluster looked spectacular in 10x50 (6.5º) binoculars, but only parts could be seen at a time and I needed to scan around to view all of it.

I finally broke down and purchased the Vixen Ascot 10x50 Superwide Binoculars (8.5º). The first object I looked at was the Coma Star Cluster and it was truly magnificent. It fit entirely in binoculars FOV and the stars were .... blazing ... and the inverted "V" was easily seen. This was one of those rare ... "Oh, WOW! ... moments.

These binoculars were worth every penny I paid for them. Even if only for seeing the entire Coma Star Cluster as it should be seen. 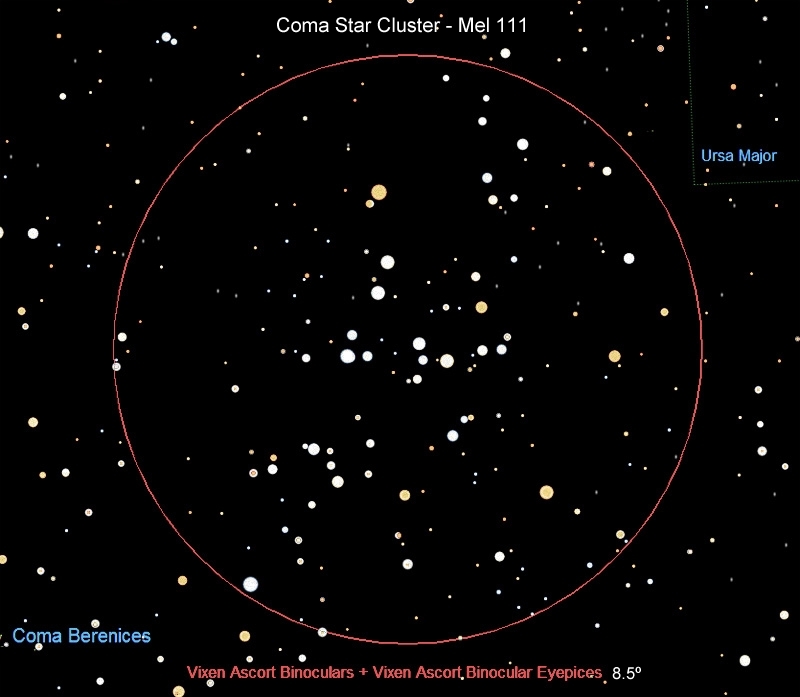 Whenever I sit down at the Monster parallelogram with my 28x110’s:

I've logged M74 with my 15x70s from Cherry Springs State Park but haven't had any success so far with the Canon IS 15x50s that my wife and I purchased earlier this year.  I haven't been to a good dark site since August but will certainly try if things ever get back to some semblance of normal.

I have been rather surprised that I've been able to see M33 from my light-polluted front yard on a couple of occasions with the 15x50s.

You are my Icon now. LOL Seriously, M.74? M.33 I believe would not be hard in the right conditions, but M.74? It took me 3 years to see it in an 8 inch telescope. This is where experience counts & it shows.

Sort of a break through moment for me with binoculars happened in September of 2000. I was staying in the Ozarks at a lake front house that had been in our family for a generation. It was Labor Day weekend and the Lake was busy, needless to say with an amazing amount of dock lights, partiers, etc. Looking for a place away from all the noise and lights, I went driving around back roads (gravel roads) and noticed this weather beaten sign that said "Old Silvey Cemetery" pointing up a weed choked and tree cramped road. Really not that much more than a track. But I was on a mission so up I went driving a GMC pickup. :-)

Sure enough, there was a nice clearing in front of the cemetery gate with a reasonable amount of sky so I set up. It was atmospheric once darkness fell, to say the least, with faded old headstones glimmering in the starlight. I'm not making this up. It was about a year after The Blair Witch Project was released. lol

Anyway, two of the items on my observing list were NGC 6939 and 6946, an OC in Cepheus and a GX on the border between Cepheus and Cygnus, only about 2/3rds of a degree apart. Really a fine duo. The OC is about 4000 LY distant while the GX is about 10 million. I had observed them for the first time only a few weeks before at the club's Louisburg observatory, which is not a really dark site, and they had been dim in the 9.25 inch Celestron SCT I was using then.

My practice was to scout a field out with the binoculars to make it easer to find objects in the telescope. At the Old Silvey site I was amazed to find that I could actually see both the cluster and the galaxy with 10x50 binoculars. Here is a comment from my journal, dated September 3, 2000: "Amazingly, these two objects are readily observable in binoculars! They appear as faint patches of nebulosity fairly near one another but still separated by open starfield."


Also tagged with one or more of these keywords: beginner, binoculars, charts, dso, equipment, LP, observing