Hoping someone can take a look at this photo and tell me if collimation is off. I think it’s perfect except the vertical line of the crosshairs looks slightly too far to the right. Doesn’t seem like something I can adjust. Is this a concern or is collimation correct?

What telescope do you have?

Those do not appear to be cross hairs but the spider vanes.  I am assuming you have a Newtonian or Dobsonian and are using a collimation cap.

Also we need to see how the secondary is positioned through the collimation cap (to see if it is centred and rounded.  Also being able to see the mirror clips in the image will also help.

The Primary collimation looks ok with the collimation cap dot (inside the cricle) but it could be a little more centred (especially if your telescope is f/5 or lower).

The first time I posted this I said right instead of left for the secondary reflection image (sorry).

Thanks, I have an Orion xx14i, so f4.6. And yes that is looking through a collimation cap. I don’t see mirror clips off the primary ever (don’t think they are on that particular scope). Does the spider vane positioning need to be a bullseye in the center of the secondary intersecting on the donut hole? Can’t tell from the photo but the vertical vane is slightly too far right to the center

Ok so it actually looks pretty good from a first glance point of view.

The secondary should appear offset at f/4.6 as shown in the image below.  Your images seem to be taken off axis from the centre of the focuser a little bit.  I suspect the offset is correct. To tell you better we really need a wider view showing the mirror clips or at least the edges of the primary reelection and physical edge of the secondary mirror(put the focuser racked all the way in, not extended and try taking the pictures).

Given you telescope is F/4.6, I would recommend getting some better collimation tools like this or the 2" version (this is a really good set of tools that will allow for very accurate collimation).  This will ensure your collimation is bang on (which is important at F/4.6).  The other option would be the Glatter laser and Blug (or Tublug).  If both of these are out of your budget get a good Cheshire like the Astrosystems Combo Tool (but ignore the instructions as they are terrible).  This is also a really good tool that allows you to do all the collimation steps with one tool but it takes a bit to learn.

With the Collimation cap only the collimation process should be (This must be done in order);

1) Centre and round the secondary so it appears in the centre of the focuser drawtube (this only generally needs to be done once and it should be good for a long time).  I think yours is OK so I would leave it alone for now.

2) Using the secondary collimation screws either get the mirror clips equally visible or get the periphery of the primary mirror equally visible (you need to have the focuser in a long way to do this).

3) Centre the dot of the collimation cap in the marker using the primary collimation knobs on the bottom of the the telescope.

FYI - Step 2 is hard to get accurate enough for an f/4.6 telescope with a collimation cap,  Steps #1 and #3 should be Ok but would be more accurate with better tools.

Again, I don't think the position of your secondary mirror is off and I would leave it alone until you get some better tools. 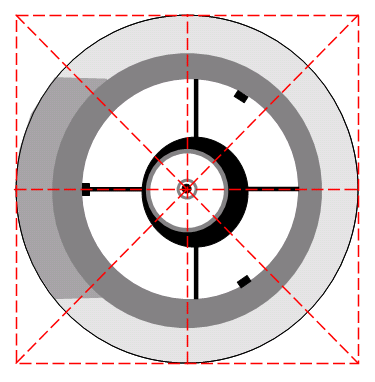 I actually have a Hotech laser collimator and check everything with the collimation cap. Not sure I trust the reading on the Hotech. The slightest bit of wiggle causes the red dot to move around, so I’m always second guessing when I think I have everything aligned.

The problem with so many collimation systems (and eypieces) is the registration of the laser (or eyepiece) in to the Focuser.  I really like the Howie Glatter Parallizer to address this.  The Parallizer is a 2" to 1.25" adapter that has a ridges on the Outer Diameter and Inner Diameter that force the adapter and eyepiece (or collimation tool) to be Parallel with the drawtube.  I can take my Farpoint laser out, take the Parallizer out and the reassemble it all and the laser goes back to the same exact point.  I can rotate the laser, I can rack the focuser in and out and the laser does not move. Same with by combo tool,  I can take it out and put it back in and the view is exactly the same (dot centred in ring).    My dot does not wiggle at all.

I highly recommend the Parallizer as it "stops the wobble".

Unfortunately I don't know how well it will work with the Hotech because the Hotech kind of has its own registration system.  I have heard that the Hotech does not register in the focuser well.  It my be worth a trying to use the Parallizer and not the clamping system on the Hotech laser or sell the Hotech and get a Farpoint or Glatter and use it with a Parallizer (This really really works well for secondary collimation).  I use a Combo Tool for Primary collimation (not the laser).  The Farpoint kit with the laser and Cheshire looks really good.

If you're using the Hotech 1.25" laser it's possible that the top ring of the SCA system on it is dropping into the eyepiece compression band recess.

Most of the time the laser is a secondary collimation tool to be used with a Barlow to align the primary mirror.

and it looks to me that the secondary mirror is clocked a bit to the left,

Yeah thinking I may have to bite the bullet and get the Glatter. Too nice of a scope to have it underperform due to lack of collimation. You mentioned the Glatter Parallizer? I was thinking the Glatter laser and Tublug. Will these work on their own or is the Parallizer essential?

If you get the 2" laser and the 2" Tublug you don't need the parallizer.  If you get the 1.25" laser and 1.25" Tublug, I would get the Parallizer.  Also, you should still get a sight tube to centre and round the secondary.   (Like the Astrosystems Combo Tool or a Catseye sight tube or simililar (I actually cut a cheap amazon long cheshire shorter to make a suitable sight tube, it does not work like a full combo tool but is great for centring and rounding the secondary).

FYI... The Farpoint laser is exceptionally accurate and half the price of the Glatter.  If It were me I would get, the Farpoint 1.25" laser, the Glatter Parralizer and the 1.25" Tublug.  The Glatter Parallizer works really well with eyepieces as well.

--centering the secondary under the focuser--use a sight tube here , or a combination sight tube + Chshire.

--adjusting the tilt of the secondary to put a laser beam dead center in the primary or use the crosshairs of a sight tube and line them up on the primary center marker.

--adjusting the tilt of the primary to center the center marker in the center of the tool reflection.

What to ignore as you do this:

--distant reflected image of the crosshairs in the tool

--whether the shadow of the secondary silhouette is concentric with any other image.