A mathematician and an engineer die and go to heck ;o]

the devil puts them in a loooong room with a beautiful woman at the far end.

the devil says "Each time I ring this bell you will run 1/2 of the distance to the end of the room. Understand?"

The both nod in agreement, so the devil rings the bell and the engineer takes off running, but the mathematician doesn't move.

Again he rings the bell and the engineer runs 1/2 of the remaining distance while the mathematician remains at the starting line.

So the devil asks him why are you not running?

He explains that as a mathematician he knows that if he always runs 1/2 of the remaining distance he will never reach the end.

the devil nods and goes to the engineer, "you heard him, you will never reach the end, why do you run?"

The engineer replies "Because I will get close enough for all practical purposes!" 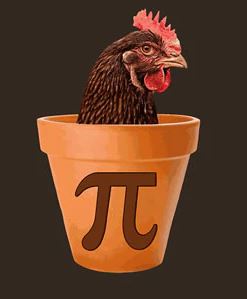 Did you hear about the statistician who drowned crossing a river?

It was three feet deep on average.

Because you should never drink and derive.

What do you call a number that can’t keep still?

Did you hear about the statistician who drowned crossing a river?

It was three feet deep on average.

The standard deviation is something dreadful.

Three statisticians go out hunting together. After a while they spot a solitary rabbit. The first statistician takes aim and overshoots. The second aims and undershoots. The third shouts out, “We got him!”

Did you hear the one about the statistician?

How do mathematicians scold their children?

What do you get when you take a bovine and divide its circumference by its diameter? 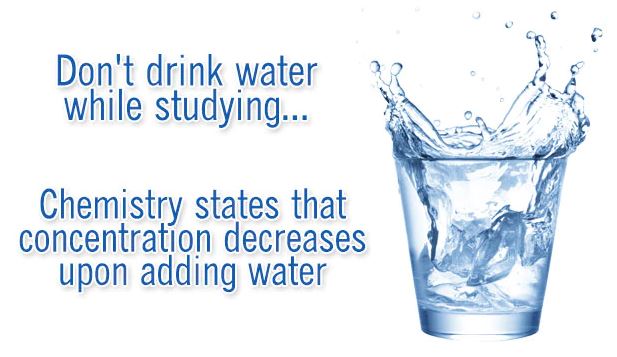 What is the name of the first electricity detective?
Sherlock Ohms

Entropy isn't what it used to be...

Where does bad light end up?
In a prism.

Something like this happened to me when I was an undergrad.

I had been doing some random synthesis (don't recall), and had been heating a round-bottom flask over a Bunsen burner with the aid of a ring clamp.

When the reaction heating time was over, I turned of the burner, raised the flask, and then absent-mindedly grabbed the iron ring with my right thumb and forefinger (maybe ring finger as well) to remove it from the stand.

I remember hearing the sizzle before feeling any pain.

I learned a new way to hold a pen to take notes that served pretty well for the next few weeks.

I had a similar experience a few years ago with, of all things, beef fajita's. I had made a fajita and without thinking about it stuffed the fork under the meat and on top of the still sizzling cast iron pan. After eating the fajita I pulled the fork out and stabbed a piece of steak and popped into my mouth. It took a few seconds to identify the sizzling sound I heard coming from lips!

Thanks for the laughs!

I don't get the one with the rooster in the flower pot with a pi on it. Anyone care to explain? 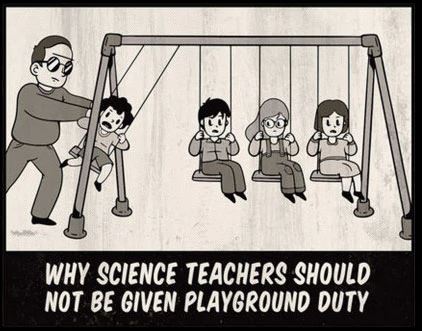 Thanks for the laughs!

I don't get the one with the rooster in the flower pot with a pi on it. Anyone care to explain?

Albert Einstein was just about finished with his work on the theory of special relativity, when he decided to take a break and go on vacation in Mexico. So he hopped on a plane and headed to Acapulco. Each day, late in the afternoon, sporting dark sunglasses, he walked in the white Mexican sand and breathed in the fresh Pacific sea air. On the last day, he paused during his stroll to sit down on a bench and watch the Sun set. When the large orange ball was just disappearing, a last beam of light seemed to radiate toward him. The event brought him back to thinking about his physics work. "What symbol should I use for zee speed of light?" he asked himself. The problem was that nearly every Greek letter had been taken for some other purpose. Just then, a beautiful Mexican woman passed by. Albert Einstein just had to say something to her. Almost out of desperation, he asked, as he lowered his dark sunglasses, "Do you not zink zat zee speed of light is very fast?" The woman smiled at Einstein and replied, "Si."

A year after almost failing his high school physics class, a boy told his older brother,
"You know, my physics teacher was right about the optical Doppler effect. You see those cars? The lights of the ones approaching us are white, but the lights of the ones moving away from us are red."

Elementary particles are the dreams that stuff is made of.

A Call for More Scientific Truth in Warning Labels

As scientists and concerned citizens, we applaud the recent trend towards legislation that requires the prominent placing of warnings on products that present hazards to the general public. Yet we must also offer the cautionary thought that such warnings, however well-intentioned, merely scratch the surface of what is really necessary in this important area. This is especially true in light of the findings of 20th century physics.

We are therefore proposing that, as responsible scientists, we join together in an intensive push for new laws that will mandate the conspicuous placement of suitably informative warnings on the packaging of every product offered for sale in the United States of America. Our Suggested list of required warnings appears below.

Warning: This Product Warps Space and Time in Its Vicinity.

Caution: The Mass of This Product Contains the Energy Equivalent of 85 Million Tons of TNT Per Net Ounce of Weight.

Consumer Notice: Because of the 'Uncertainty Principle,' It Is Impossible for the Consumer to Find Out at the Same Time Both Precisely Where This Product Is and How Fast It Is Moving.

Advisory: There is an Extremely Small but Nonzero Chance That, Through a Process Known as 'Tunneling,' This Product May Spontaneously Disappear from Its Present Location and Reappear at Any Random Place in the Universe, Including Your NeighborUs Domicile. The Manufacturer Will Not Be Responsible for Any Damages or Inconvenience That May Result.

Read This Before Opening Package: According to Certain Suggested Versions of a Grand Unified Theory, the Primary Particles Constituting This Product May Decay to Nothingness Within the Next Four Hundred Million Years.

This is a 100% Matter Product: In the Unlikely Event That This Merchandise Should Contact Antimatter in Any Form, a Catastrophic Explosion Will Result.

Public Notice as Required by Law: Any Use of This Product, in Any Manner Whatsoever, Will Increase the Amount of Disorder in the Universe. Although No Liability Is Implied Herein, the Consumer Is Warned That This Process Will Ultimately Lead to the Heat Death of the Universe.

Note: The Most Fundamental Particles in This Product Are Held Together by a 'Gluing' Force About Which Little Is Currently Known and Whose Adhesive Power Can Therefore Not Be Permanently Guaranteed.

Attention: Despite Any Other Listing of Product Contents Found Hereon, the Consumer Is Advised That, in Actuality, This Product Consists Of 99.9999999999% Empty Space.

New Grand Unified Theory Disclaimer: The Manufacturer May Technically Be Entitled to Claim That This Product Is Ten-Dimensional. However, the Consumer Is Reminded That This Confers No Legal Rights Above and Beyond Those Applicable to Three-Dimensional Objects, Since the Seven New Dimensions Are 'Rolled Up' into Such a Small 'Area' That They Cannot Be Detected.

Please Note: Some Quantum Physics Theories Suggest That When the Consumer Is Not Directly Observing This Product, It May Cease to Exist or Will Exist Only in a Vague and Undetermined State.

Component Equivalency Notice: The Subatomic Particles (Electrons, Protons, etc.) Comprising This Product Are Exactly the Same in Every Measurable Respect as Those Used in the Products of Other Manufacturers, and No Claim to the Contrary May Legitimately Be Expressed or Implied.

Health Warning: Care Should Be Taken When Lifting This Product, Since Its Mass, and Thus Its Weight, Is Dependent on Its Velocity Relative to the User.

Important Notice to Purchasers: The Entire Physical Universe, Including This Product, May One Day Collapse Back into an Infinitesimally Small Space. Should Another Universe Subsequently Re-emerge, the Existence of This Product in That Universe Cannot Be Guaranteed.

I had to look that up; we don't have chicken pot pie where I'm from. 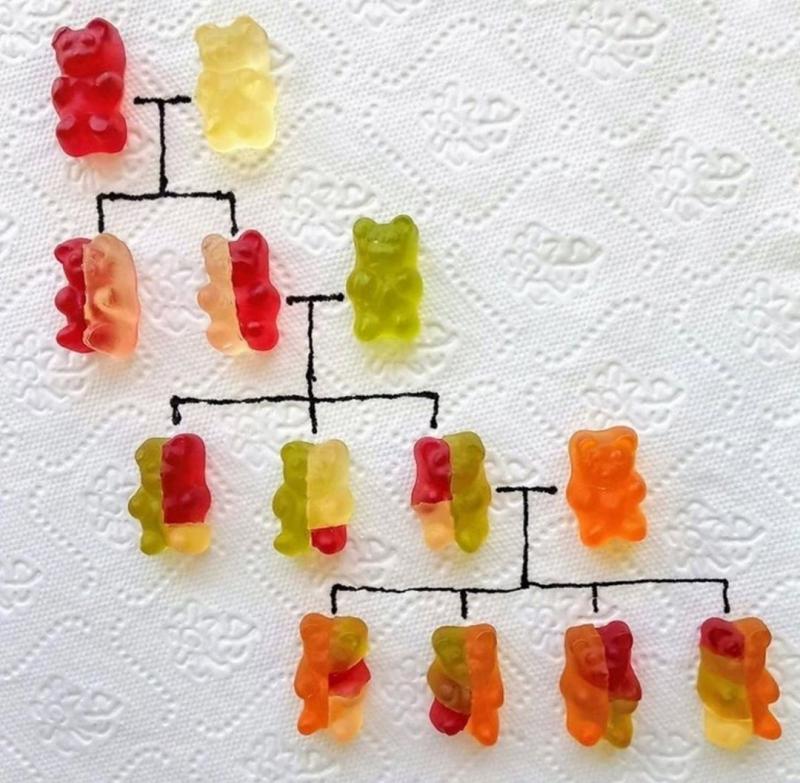