My Exploradome came with plastic ring segments that go under the dome skirt to keep the dome from lifting in strong winds.  The dome is actually quite aerodynamically stable, as well as being heavy, so I have seen no tendency for it to lift.  However, given the value of the equipment it is protecting, a retention system is a good idea. 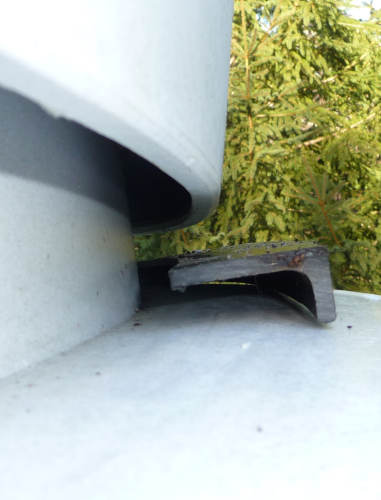 As long as I was using the big geared DC motor supplied by Exploradome for rotation, there was unlimited torque available, and the motor was able to force the dome around anyway.  However, when I switched to a stepper motor for rotation, the available torque was much less.  I had to remove the retention ring to reduce drag. 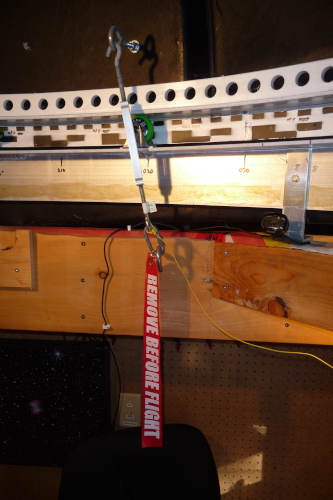 Keeping the dome on in storms has never been a problem.  I had installed removable tie-down turnbuckles that have successfully held the dome on through hurricanes.  But they have to be removed before flight using the dome, so I was always concerned about a wind coming up while the dome was open.  (The yellow cord attached to the bottom of the turnbuckle tethers a shorting plug, which, when inserted into the rotation controller, tells it to refuse all rotation commands.)

I considered modifying the original retention rings by cutting them down.  However, that would have taken a lot of fiddly work with jigs and a jigsaw, plus they are a pain in the butt to install.

My solution was to install aluminum brackets on the inside of the observatory.  They are attached to the roof framing, and have a 90-degree bend at the top that goes over the ring gear.  I would have been happier if I could have made the overlap at the ring gear larger, but the radius of the dome varies by several inches, and there isn't room for anything that extends past the ring gear itself.

The brackets will hold the ring down.  The dome itself has to be secured to the ring in order to prevent it flying off.  I had always had a couple of screws holding the dome to the ring, just to prevent it rotating relative to the ring.  I added six more, for a total of eight, to actually provide some significant hold-down force in the event that it tries to lift.  Because there is no access to the underside of the ring to install nuts onto bolts, I used self-tapping screws into pre-drilled holes.

This modification gives me peace of mind when a wind comes up while I am doing unattended imaging.

Good idea about the added brackets inside. I had a roll-off building covering a coelostat about 8 foot above ground, v-notched wheels rolling on upside down aluminum angle on top of a concrete block building. I had hooks like yours to hold it down while not in use, but had no way to protect it while rolled off the equipment. I recently took it down, but your idea would have worked there.

This is very helpful. I've been following your ExploraDome efforts with some interest. I hope mine arrives in a few weeks.

My observatory is totally unprotected to the wind in Wyoming and, honestly, I figure if the wind ever got high enough to lift the dome off, there would much worse problems to deal with. In any case, it often sees 75mph+ (120kph) gusts so I installed 2 or 3 brackets for an extra measure of safety. They only work in the park position but the dome isn't in operation when the wind is that high so I consider it to be good enough. Also, I built a custom building from CNC'd plywood so my gap around the outside edge of the dome is much smaller than the stock designs.

Still, I'm curious, has anyone ever had their dome blow off?

As a side note to Kathy's point about the torque of the gear motor, on the first rotation with the brackets, I had insufficient clearance and the brackets caught on each other, While there was no damage to the dome or brackets, the motor nearly twisted it's shaft in two before the 15A fuse blew. The acorn tooth gear wheel has been kinda wonky ever since.

These comments are based on my Exploradome being 100% manual with no motor driven shutters or dome rotation.

The prevailing wind comes from the SW (most of the time), so (when not in use) the dome shutters are oriented to the NE.

The orientation of the dome will be changed whenever a tropical storm, Nor'easter or a hurricane comes up the east coast. In those instances the dome shutters will face the west of SW.

The shape of the dome has allowed the wind to go around, my only concern is keeping the shutters facing downwind.

I truly enjoy the simplicity of my observatory.

Best wishes to you and yours.

Shortly after I completed my observatory, I was proudly showing off how well the shutter rolled on its parallel tracks. Don't you know it - a surprising gust of wind came along and lifted the entire shutter off the dome and sent it sailing into a field. I had to redo the angle iron frame and eat some crow.

As a side note to Kathy's point about the torque of the gear motor, on the first rotation with the brackets, I had insufficient clearance and the brackets caught on each other, While there was no damage to the dome or brackets, the motor nearly twisted it's shaft in two before the 15A fuse blew. The acorn tooth gear wheel has been kinda wonky ever since.

If you stalled the motor and blew the fuse, you know that bracket is heavy-duty!

I have had one of those motors snap the shutter cable without stalling.