Here is a mars report performed with the 80mm scopetech refractor under average good images, for the aperture.

The sky was transparent between clouds.

Hellas was actually bright towards Hellespontus. for both filters, blue W80A and deep yellow W12.

Aeria-Arabia was bright also at the limb with the similar extension, blue and yellow channels.

The south polar area appeared clearer than the surrounded area.

This is not possible to conclude that dust veils are purely dusty but rather misty with a strong ratio of white haze included.

The other possibility could be rather more distinct clouds, dust near the ground, white cloud above, mainly.

This needs a narrow survey, again, for a straight advise. 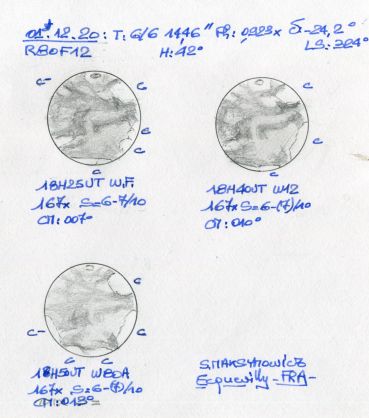 Thanks a lot Tom.

The present forum is more for observers, with say, conventional rules.

Mars is a demanding object.

Nice report and sketching. Your drawings with the blue and yellow filters are useful for bringing out clouds and dark albedo features. I do on occasion use these filters and others as well but I don't often sketch using them.

Thanks Michael, Frank for your kind words.

Always to evaluate a status on a moment should be researched.

Great drawings S-J, wish I had your seeing conditions and your eyesight

Thanks a lot David.

Salmon color "dusty" veils without filter use, especially on the Aeria-Arabia, also on Hellas basin but lesser.

Nothing else mainly under the present conditions.

Observation performed at the same orientation of the planet. 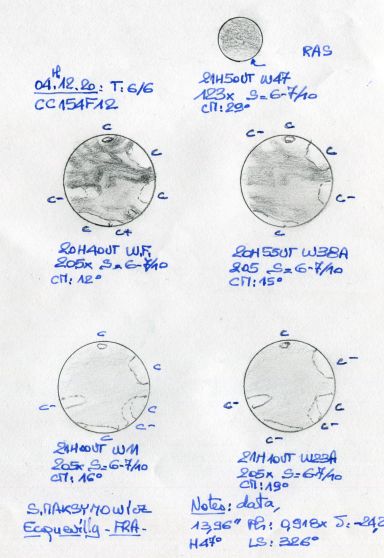