M13 is a large and bright globular cluster in Hercules, discovered by Halley in 1714, and documented by Messier in 1764. The cluster is composed of about 300,000 members with a total mass of 500,000 solar. The brightest star in the cluster is a Cepheid variable V11 with apparent magnitude of 11.9. The cluster is 22,200 LY distant, 145 LY in diameter, and 20 arcmin in angular size. It is estimated to be 11.65 billion years old. It is composed of ancient stars of low metallicity, created long before succeeding generations of supernovae enriched the galaxy with heavier elements. With apparent magnitude of 5.8, it is visible to the naked eye under good conditions, and easily identified in binoculars. A 4-5 inch telescope is needed to begin to resolve stars.

Three diverging dust lanes, known as the "propeller", cut into the SE edge of the cluster. It was first described in the 1850s as "three dark rifts" by Bindon Stoney, working for lord Rosse. An 8 inch telescope is required to detect the feature visually, but it can be photographed with much smaller apertures. The dust lanes are most likely not a part of the cluster, but lie in the foreground.

Since taking this image I have learned that for improved resolution globular clusters are best photographed with a large number of short exposures. A UV filter helps to reduce Rayleigh scatter. 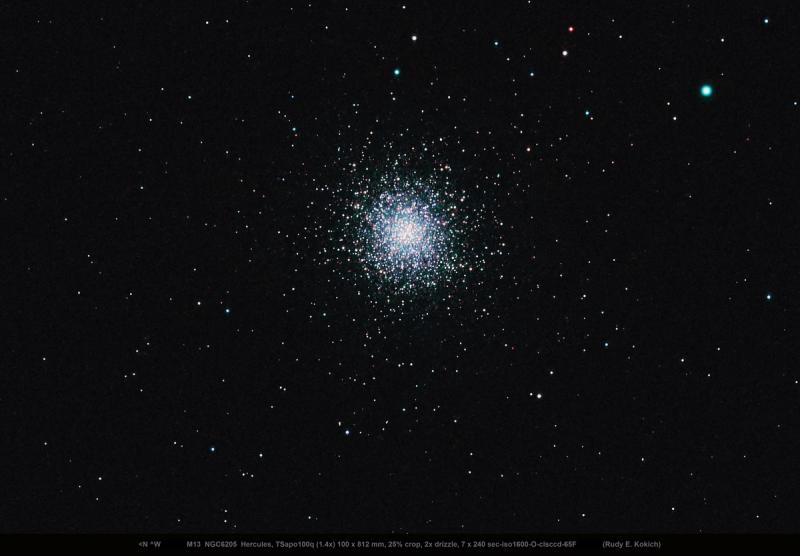 The CLS is doing you no favors on that broadband target.  It's distorting color, and reducing signal.  Such filters work best on emission nebulae, and metal vapor lights.  It's pretty much all downhill from there.  <smile>

Did you do flats?

Thank you for your comments.

I fully agree on the CLS-CCD color distortion. Here is the reason for it:

The filter blocks blue light below 450nm, resulting in a strong green bias on wide spectrum sources. The image above was taken as a part of a filter test. I reprocessed it by extracting R and G channels, then recombining them as RGG. Better, but far from perfect...

Even under dark skies, the filter significantly reduces Rayleigh scatter and background sky glow, and increases contrast and resolution, but it is only useful for emission nebulae. They might have stretched the bandpass to 440nm for a slightly better color balance...


Also tagged with one or more of these keywords: astrophotography, ccd, CMOS, dslr, dso, imaging, refractor