Forgot to say I mount them on wooden tripods. The wood seems to really make them look sharp. Thanks again, Tony.

Wow, I didn’t know that they sold a Super C5+. Looks great! Was there a Super C5?

A Nexstar 5 is a C5.  The only significant difference is how it's mounted.

A little pricey.  I'm not sure which one would fit the Nexstar 5.  Measure the tube to find out.

I've looked around at rings and offerings from Scope Stuff too. Nice stuff but I'm just making my own rings and an adapter for the mount to accept dovetails.

I wonder if it has something to do with physical size? Somehow when you have a big scope that doesn't perform that well it's a real disappointment. But if it's small and compact plus the image is outstanding the reaction is WOW! I don't have a C-5 but my 5 inch Mak performs similarly. Pretty good for a scope that you can tuck under your arm...

I bought a dusty C5 spotter a few months ago. Needs cleaning & collimating, I have it mounted on a heavy duty Manfrotto with a fluid video head. Rock-solid & very easy to use after the head’s resistance settings are just right. Being a spotter, there’s no provision for a conventional Astro finder, which is a pain. It performs well, and I expect I’ll like it much more after it’s cleaned up.

The tripod, head, and scope form a great system. Rigidity comes from the tripod; carrying capacity & fine adjustment from the head; and good optics from the C5. Vibration damping at high power is a pet peeve of mine, and my Twilight I just can’t do it. Nothing happens when I gently whack the Manfrotto with the C5 mounted. Getting the head’s settings right takes a minute, but it works very well.

It’s a definition of grab ‘n’ go. I can take the whole thing in one trip, which is good since we may be moving into an apartment in a few months. At that point, it may be used for EAA on a goto mount. It’s size makes it very versatile.

A little ways back, I knew that after several Heart attacks due to extreme stress, I knew that my 10-inch Skywatcher extend tube dobsonian was going to be a little too much scope if I was to continue Amateur astronomy with my new condition.

Ever since I saw the ads in the various astronomy periodicals for the Celestron C5+ I was intrigued. That plus the many testimonials from many satififed amateurs. Now I was more than just intrigued. After a failed attempt at acquiring a classic 5-inch JSO SCT, I decided to take a chance and placed an ad in CN classifieds offering to trade several nice 2" Ethos for a Celestron C5+ (I knew that downsizing would probably also require going to 1.25" eyepieces). Imagine to my amazement someone answered my ad.

In a matter of weeks I had a classic, vintage 1993 Celestron C5+, complete package, which included the single arm fork-arm 9-volt battery powered equatorial mount in it's original case. As well as many, many accessories including a Televue 24mm Panoptic.

Too be honest, becuase of many extremely inconvient moves and hospital visits, I have not had the greatest amount of use but have been able to observe Jupiter, Saturn, a distant Mars, several showcase DSO's and thanks to the full-aperture white light solar filter, a very nice Sunspot on the surface of an extremely inactive Sun (Solar minimum).

What really showed the sharp optics was views of the moon. On one particular morning with a thin wanning crescent, I observed what was extremely crisp and sharp craters and mountains with clearly defined shadow areas. And this was while looking at the moon in the living room thru a large sliding glass door. Other short but conviently timed observing sessions showed the Moon in amazing detail. This confirmed reports from many satisfied C5+ owners about superb optics despite being mass-produced telescopes not long after the infamous Halley's Comet era when due to extreme demand the quality of SCT telescopes took a nose-dive and quality control inspection was almost non-existent.

I am hoping for many, many happy observing sessions as long as my health conditions allow. Despite being a "small" scope, I have so far been quite impressed with this "grab-and-go".

Clear skies and let us all stay safe.

I have been observing for 45+ years, about 30 years ago, a guy brought a C5 to the job and before we clocked in we looked at the Moon with it and I will never forget how sharp that image was !.

Just got one and it's very nice so far. I got it because of the light weight fully outfitted. I wanted a lightweight scope for my wonderful Vixen AP mount, but can also be used with my lighter unistar alt az. 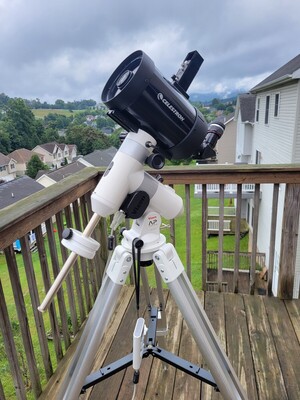 Here is my C5+ cooling down. Since selling my 127mm MCT and picking up this scope, it has rapidly become the favorite SCT I have had thus far. So small and light (just marginally larger than a 90mm MCT) it is very capable and the optics have proven to be excellent. The setup seen is total G&G - amazingly light but very stable. I love the mount height adjustment too that this tripod allows - no neck strain.

I have the original C5+ on a single fork powered by a 9v battery.

It looks just like Brollen's scope with the rail on top.

And RalphMeisterTigerMan has the exact one, except for the tripod.

It has been a great telescope for a wide variety of space objects. I have the F6.3 adapter that lives on my C5.

I mounted it on a Used C14 field tripod and it is the steadiest system I have ever used.

Knock on the tube sharply and .5 seconds later nothing. Solid as a rock.

6 days a week. This is how I afford Amateur Astronomy. But it doesn't lend to much observing.

If I live long enough, I will retire in 4 years. Then it's ON!

The C14 field tripod has threaded holes on top of the plate. The matched the pattern on the base of the C5+. I got some hand tighten knobs, most likely from Lowes.

I modded them slightly by adding a nut to effectively shorten the bolts so they would not require more than the thickness of the top plate to secure.

Not exactly a G&G 2 trips and 3 wing nuts and that's it. Seems like overkill, but you can lean on this rig to rest if you get tired. Or your back starts hurting.

My back probably hurts from toting that C14 tripod around.

May you rest in peace and I will never forget you. For further info, please read my post in Classic Telescopes, It's a Firesale. Should tell you why I am moarning the loss of a beautiful scope.