The oldest scope that you have an ad for

The oldest classic scope ad that I have in any type of book, is the Tinsley refractor, 3 and 4 inch. They are in my 1948 S&T magazine. The 3 inch is around $200, and the 4 inch was around $400. I did not see any other complete scopes in the book, but several mirrors, mounts, and stuff like that.

IIRC, it was clipped from Scientific American.  Paper is yellow, thin, & fragile -- I keep it in a thick vinyl sleeve -- same type I use for my small collection of CSA paper money... 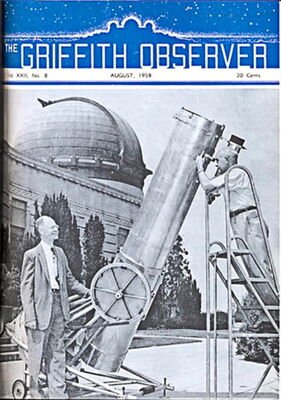 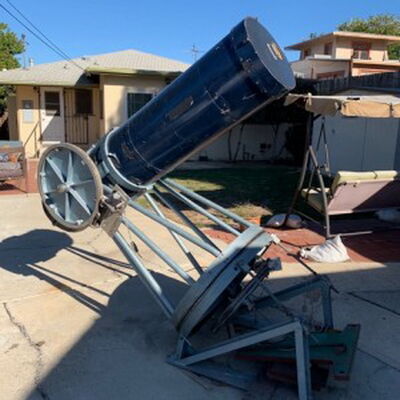 I have one of these 1st Generation 'United Trading/Unitron' Model 128s as shown. 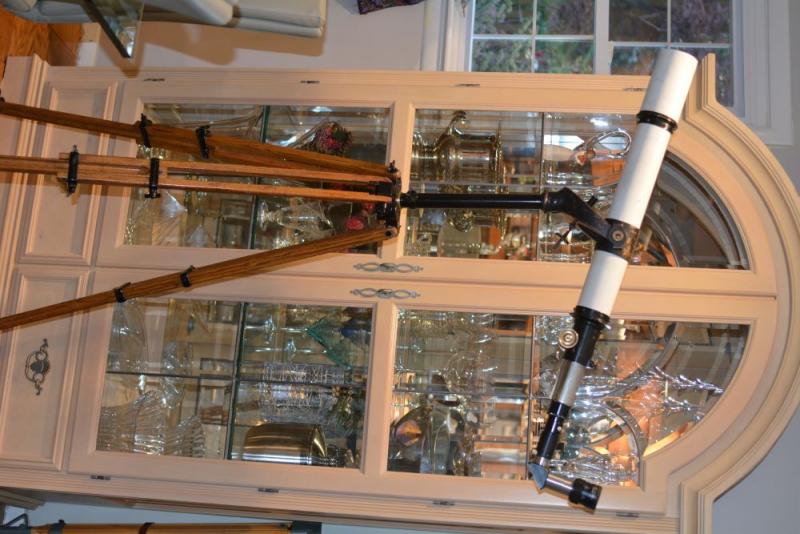 
If it is a light metalic green with wrinkle grey parts and altaz mount, it is a very early Monolux. I believe you bough it from Joe S in Santa Rosa.
Much of its history,rescue, and a good bit of discussion, can be found here:

I'm glad it found a home with such distinguished company!

Wow thank you for the info 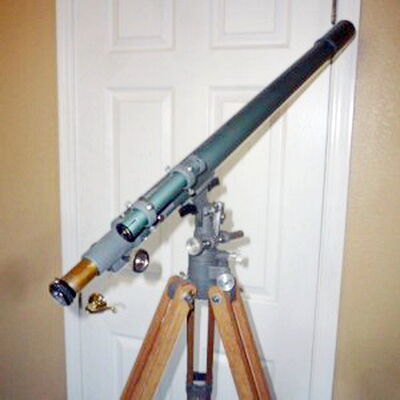 My Circa 1954 Unitron 155.  Thanks to Dave's Unitron history website I was able to find the advertisement.

This scope is e. vion 1.75 inch refractor with terrestrial and astro eyepiece. Table top tripod. Its real nice for moon and planets. Ad is from S.E. Laszlo the importers in 1958. I even found the book they included with scope. I have a brass e. vion three inch. The optics on these scopes from France where incredible, i dont have an ad for that one though. 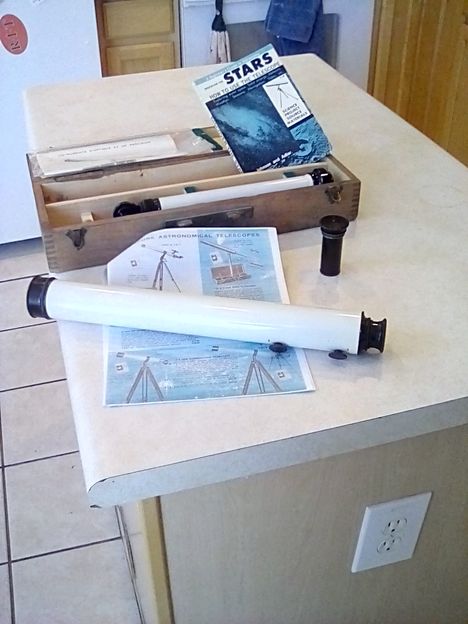 "You are more correct than you might realize with the statement, "Not everything Selsi is made in Japan."

Selsi actually began importing telescopes and binoculars, and some microscopes back in the late 20's early 30's from France. At that time they were known as Selsi-E.Vion. They imported some beautiful (now vintage) brass telescopes and binoculars made by E.Vion of Paris. I had a Selsi-E.Vion catalog dating from 1932 (if I recall correctly) that showed beautiful brass refractors up to 4" diameter, brass and wood EQ and alt/az mounts available.

After looking at that catalog for years I was actually a bit disappointed when I found that they (Selsi) in the late 50's and through the 60's were only importing Japanese scopes (that was before I knew what excellent telescopes the classic Japanese refractors were). Of course after the war they were no longer known as Selsi-E.Vion, rather it was just Selsi.

A bit of trivia for the Classic forum. "

Always wanted one of these as a kid; their ads were everywhere - Boy’s Life, Popular Mechanics, Popular Science, National Geographic. Finally got one when we collected some of my father-in-law’s stuff. Fun scope to use. They made lots of them so they are not too hard to find.


My guess is mid 50s, a not quite good enough prototype very similar to the Unitron 40mm f20. It originally had a 1.25mm od drawtube with a .965 focuser on the end, like the Unitron, but was not well made. The focuser assembly on it now is from a Tasco 50mm, turned down by Chuck Hards. He also very kindly made the longer lower wood extensionsfor the tripod. That thread has most of the story, and lots of give and take.
It was a lot of fun to work on, but was not a good set up for my needs . I still have a 40mm F19 Edmund flyweight on a tabletop mount, spiffy on double stars!
Cheers
Carol
Who has collected all sorts astronomically related ephemera- stamps, trade cards, maps and planispheres- but no ads....
Carol 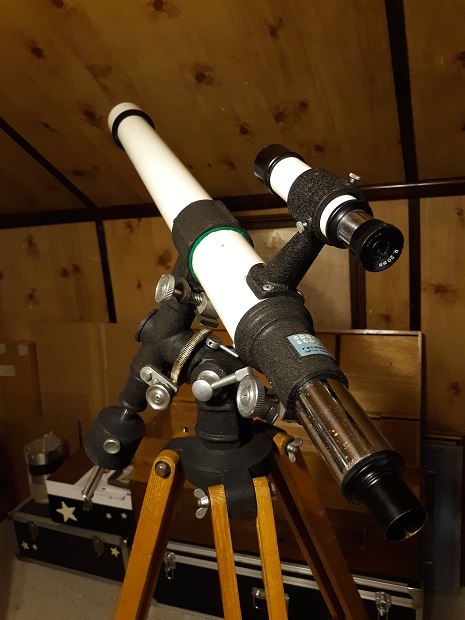 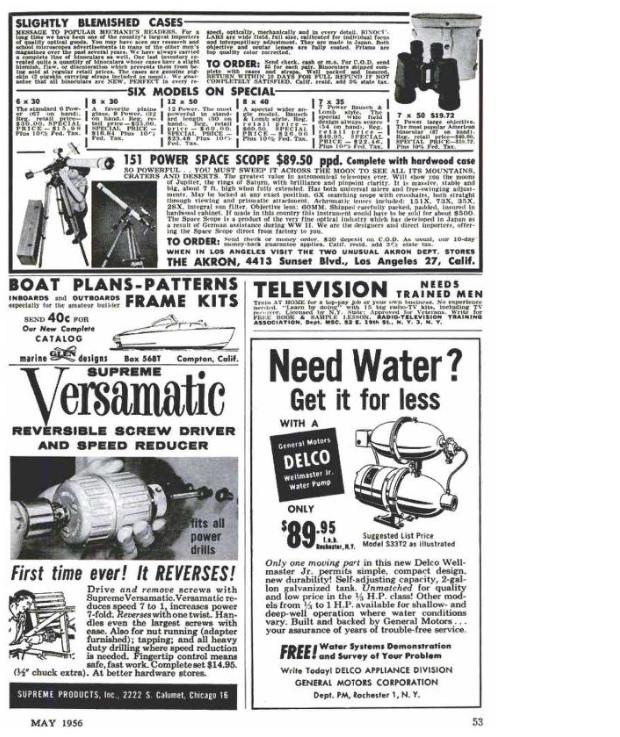 Confusing thread.
What's the oldest scope ad I have, or the oldest ad and scope?

I'm fairly certain 1957 was the introduction of this lens.

There never was to be a 5 inch telescope so you built your own.

That's exactly what I did.

It's gone thru quite a bit of evolution but here's the final and finest: 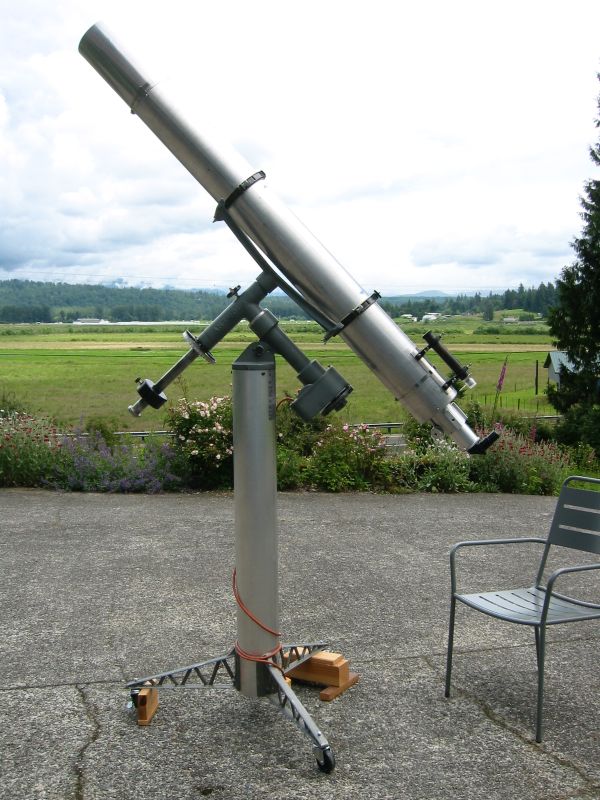 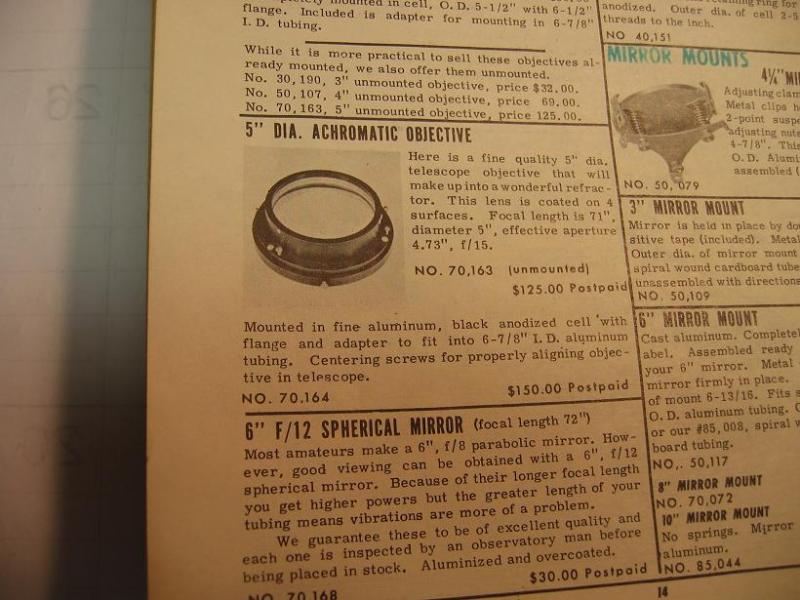 Maybe this doesn’t count, but here’s the Astromart ad from which I purchased my 1968 Tasco 7TE-5.  Until I just looked it up, I had no idea that that was 10 years ago!

I have a reprint of the ad for my 1952 Unitron 142. I don't know if that counts. It's the version with no lettering on the cell, thin lens elements, the fixed clamshell, round base on the mount, and smooth counterweight shaft.

The earliest original ad that I have is the 1968 Edmund catalog that goes with the two Edmund reflectors in the loaner set. I have a bunch of original literature that came with one of the Unitron 114s, but I think it's about the same age or a bit more recent than the Edmund.

The oldest scope I have an ad for is the 1965 Sears model 6320 60mm f/11 altazimuth refractor (Towa). This is the page from the 1965 Sears Fall-Winter catalog. It's the first one to the right. This one didn't have a wooden box like its equatorial brothers. It was a nice package that included the telescope, two eyepieces, sun and moon filter, 2x barlow, book and magazine subscription. I that didn't get you interested, nothing would.