Celestron 8-24mm.  The version I bought was the spotting scope one, so it might be different to the astro model. The first thing I noticed was that it was even less parfocal than my Baader.  In fact, none of these 4 zooms are parfocal to my aged eyes, but might be to someone younger.  The field of view was also smaller.  What disqualified it completely though was that it wasn't threaded for filters or screw in Barlows.  I therefore returned it without further testing.

Hyperflex 9-27mm.  I compared it with my Baader during the day on my shed.  Even though the focal lengths are lower, the actual field of view at 27mm is about the same as the Baader 8-24mm at 24mm.  Nor was it as sharp as the Baader in my f/6 refractor.  I was planning to try it with my Quark, but there were no sunny days or clear nights before I passed it on to two of my grandkids to use with the 70mm f/10 I bought them for Xmas.  Not surprisingly, it was better at f/10.

Svbony 7-21mm.  I tested it on a very low down Saturn, and surprisingly found that on my f/6 refractor it was as good as the Baader on axis.  Sharpness fell off somewhat off axis and the field of view was quite a bit smaller.  So far, so good then.  However, trying it on prominences with my Quark it was way behind the Baader, seemingly because of lower contrast.  I bought this firstly for outreach rather than risking my Baader zoom.  Secondly, it's very small and light, even compared to other Svbony models, so I thought it might therefore be useful in binoviewers.  I need to test it further at night, but will almost certainly keep it for the reasons given.

Baader 8-24mm.  This is much more expensive than those above, and not surprisingly outclassed all of them, both in sharpness/contrast and field of view.  It's by far my most used eyepiece, although I also own a selection of quality fixed focal length eyepieces.  The only downside, that's really important only for binoviewing with a Dioptrx, is that unlike most zooms the eyelens rotates when zooming.

Use with a Dioptrx.  I've separated this as it applies only to those who want to correct their astigmatism in this way rather than using glasses.  The Hyperflex doesn't accept a Dioptrx.  Both the Celestron and Baader have a 43mm screw thread under the eyecup to which a Dioptrx can be fitted.  It helps though to use an O-ring or elastic band in the groove under the rim.  The eyecup of the Svbony is glued on but does come free with a bit of force.  A Dioptrx can then be fitted but an O-ring or elastic band is definitely required.  This time it goes on the very top of the rim.

The Baader Hyperion IV zoom and Barlow Barlow combination hit the sweet spot in term of optical quality, convenience and cost. It replaced the two stock oculars on my Skywatcher 200P and I am delighted with it.

I also have  42mm wide angle but that is my total eyepiece collection.

The Baader Mk IV has a tiny rattle to it when not at 8 or 24, that rattle is from the bearings they use in the zoom mechanism, very normal.

Baader uses roller bearings where all the others use a bushing, just provides a finer feel to the operation of the zoom.

I used it for a while in terestiral viewing but missed the fov of my Naglets so I moved it to my solar kit.

I do use the zoom in my H-alpha scope, but that's a different type of viewing, the Sun doesn't need a wide field of view so zooming in is better than buying a bunch of TV plossl's, cheaper too.

Thanks for sharing that about the rattle SloMoe, I’ve been contemplating purchasing a Mark IV and glad I know that! I would’ve thought something was wrong with it! LOL.

Stay away from the no-brand zooms - unless you are a fan of kaleidoscopes.

you made me snort!

Celestron 8-24mm.  The version I bought was the spotting scope one... What disqualified it completely though was that it wasn't threaded for filters or screw in Barlows.  I therefore returned it without further testing.

Model #93230 has filter threads and a barrel that unscrews in order to use other types of barrels: 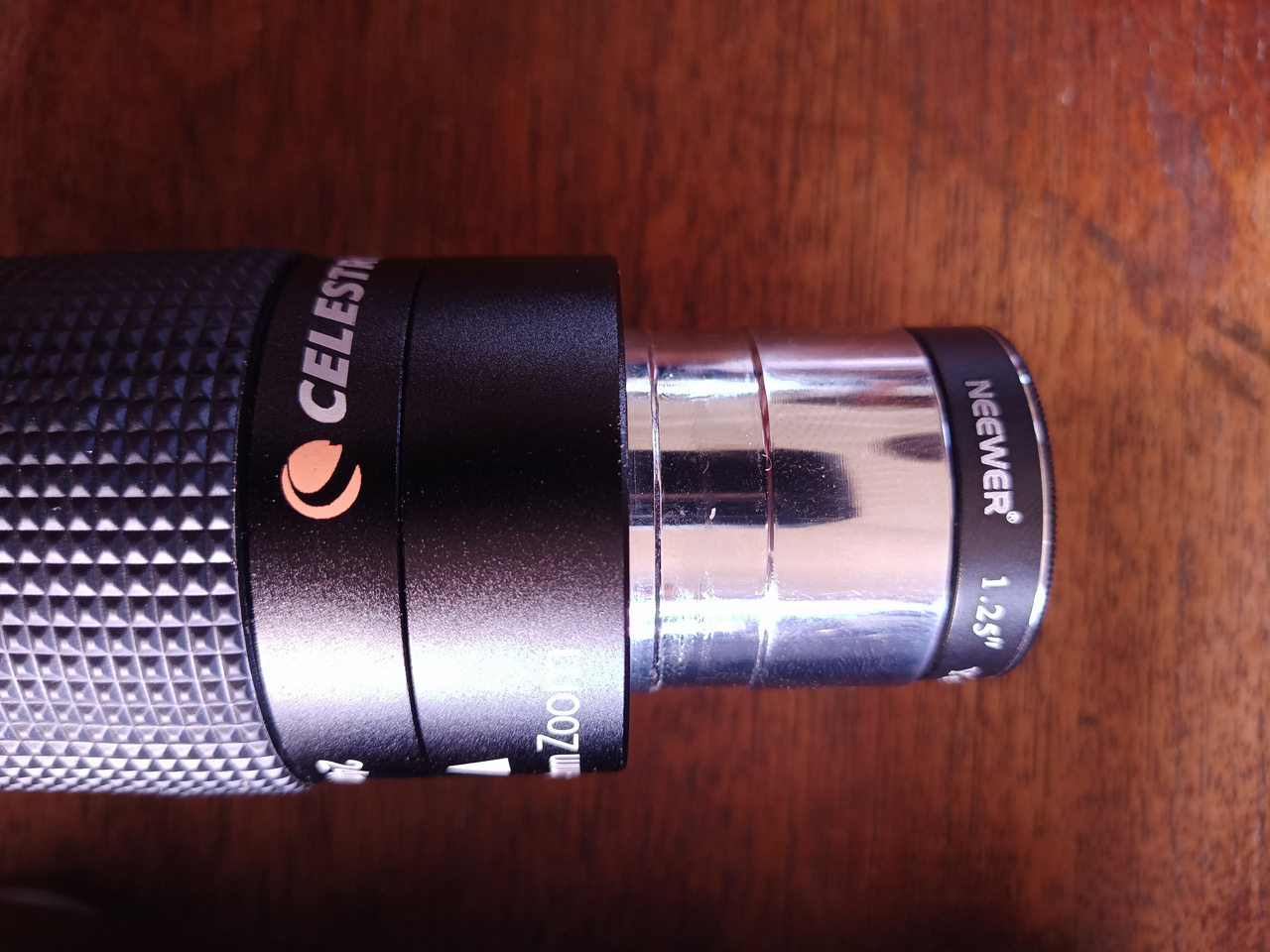 Depends on your budget, you've got thousands invested in eyepieces so you would think that. For a newbie with a $600 scope and a $200 budget for eyepieces, a $100 2" ultra wide finder, Celestron 8-24 for $80, and a $20 6mm gold line planetary eyepiece is a very nice setup, built mostly upon the flexibility of the zoom in the middle.