What are the dimensions of the Meade 16" f10 OTA? I am considering getting one for my observatory.
Any pro's and con's I should be aware of?

The OTA is 17.5" diameter and 33" length without external focuser attached.
The weight of the OTA is a bit of a controversy as various weights have been given and recorded by owners.  Suffice it to say 70# probably is a good 'low' estimate.  Dressed out you'll need to add the weight of the dovetail system or parallax rings depending on which you choose as mounting method.

Using a 16" SCT some basics include operating the onboard fan to cool the primary mirror prior too and sometimes during use.  The use of reflectix material around the OTA can reduce tube currents if you have high swings of temperature in your observatory.

The 16" focal length of 4064mm is of course ideal for the small targets, 1/2 degree and smaller including the planets, small galaxies, planetary nebula, etc.   The drawback of course is the longer exposure at F/10 though you can opt for a reducer like the Optec Lepus for ACF variants.  The older LX200 non-ACF® can use the reducer/correctors offered of course.

If you're using 1" and smaller camera sensors, consider purchasing second hand the Meade 3.3 focal reducer which will speed up the imaging of much smaller targets.

Thanks Paul.  I currently have a C11 and want the 16" for increased focal length for small items, and increase in resolution.  Hence I don't want a reducer.  I have an FLI Kepler 4040 camera with 36 mm x 36 mm sensor and 9 micron pixels (same as 16803).  Also have FLI Atlas focuser so won't use Meade focuser.

I have an AP 1100 GTO with the 16" dovetail bar.  What are advantages / disadvantages of the dovetail system or parallax rings on the OTA?

I love my 16". Crisp images on planets, extra detail on sun.. I have a full solar filter. The totality of the 2017 eclipse was mind blowing too.

For some the Parallax rings allow multiple positions to attach alternate devices including refractors, cameras, guiders. Solar scopes,etc. A single dovetail bar only mounts the OTA itself. And you are limited to attaching dovetails to certain points on the OTA.

My LX200-16" is an older vintage than what's currently offered, but it's dimensions appear to be similar to what carolinaskies posted. Mine has the DEC bearings and drive components for the ALT-AZ mount attached, which accounts for additional weight. I'd place it at 125# as it sits with these, but a newer generation might be lighter. (Remember these had separate Fork, RA drive base, and DEC drive was attached to the OTA)

Meade is currently offering LX200-16" ACF OTAs claiming 67# weight on Losmandy-style Dovetail. (Reasonably priced I must say) I assume this is what you are considering, but offer this perspective for others who might be thinking of a used OTA.

Performance - I see the same 0.28 arc-sec figure in the current ACF specs, and the additional mirror lock feature. I often envy the prospect of losing mirror flop, but have learned to deal with it. However, I do agree about the benefit of an external focuser as long as you're not using a flip-mirror system as I often do.

I cannot find secondary mirror specs for the current generation, but here's mine which lists 5": 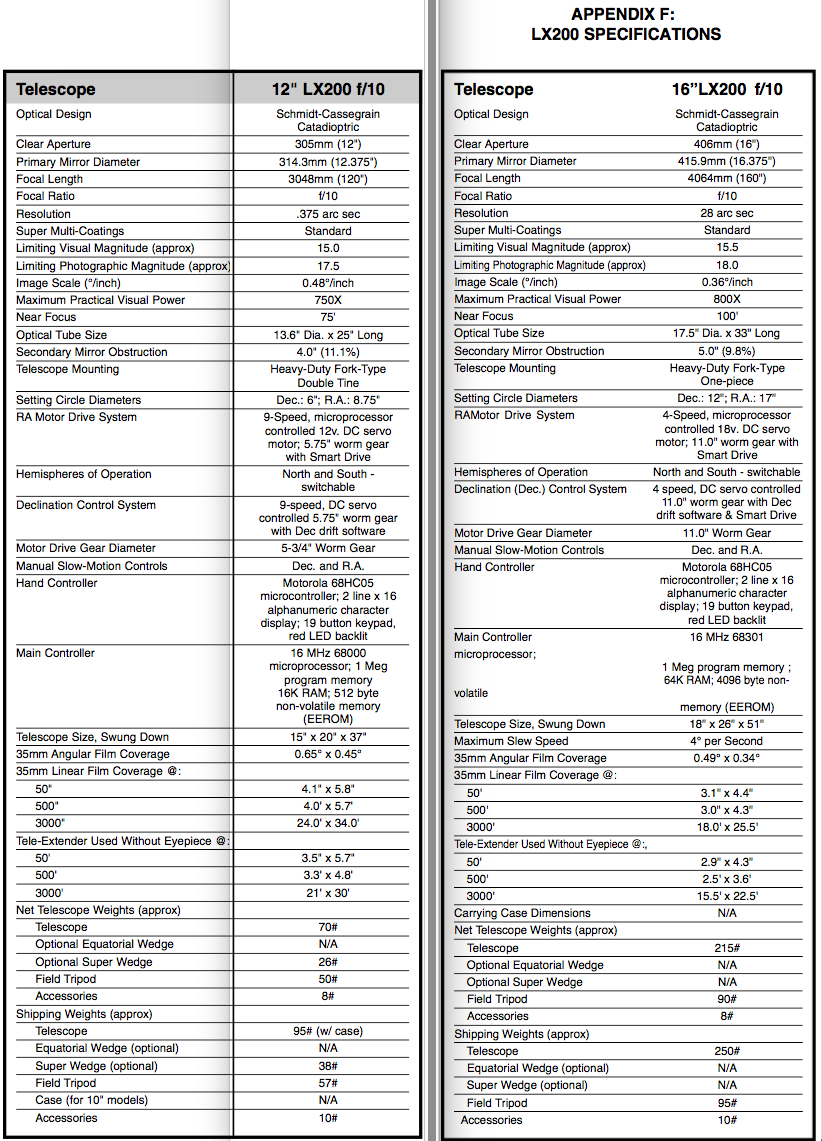 I can tell you that my 16" has noticeably better contrast than my 12" - who's secondary obstruction is higher (% by diameter).

On the practical side, I should mention the issue of collimation on a live sky. It's simply not possible to reach the eyepiece while adjusting the collimation screws. It's a two person operation unless you use a camera in the primary light path to view on a live computer monitor. It's particularly of issue since bench collimation is not optimal with such a large floppy mirror. (that's where the envy part comes in)  If there's anything to criticize about the execution of this design, it's using only the standard type secondary mirror holder and not some more innovative approach. (IMHO)

All that said, the 16" is a satisfying instrument once you learn and master it's quirks. Certainly worth the OTA price I just saw on the Meade site.

My experience is solely fork-arm mounted, so I can't offer anything about other mounts except to say "it's a tank" and does not give a hint of any structural weakness when held by the rear cell as the ALT-AZ assembly does.

I just purchased the f10 16 inch, OTA only.  It should arrive in a couple weeks.

It's for astrophotography only so if I ever collimate it, it will be with a camera.  I guess I'll need to point it in the direction of the pc screen so I can see it and the screws at the same time.  Thanks for that heads up.

Use live view on dslr camera connected to tv output, PC wifi, or phone via Bluetooth. . Then you can simply watch the screen as you adjust screws.

If using ASIAIR you can have tablet in hand at front of OTA to see changes.

Congratulations on that purchase EricCC, watch long and giggle.

To your planned use for exclusive astrophotography I would only say - you should look through it at least once, preferably at on object at zenith using a big hunk of glass. (just to say you did)

On a good night, it's startling. (no pun intended)