Winter Constellations of the Northern Hemisphere

Here is my sketch of the winter constellations from Central Texas USA around 9PM CST (3AM UTC) on January 15, 2021. The star field is from Stellarium software of the night sky as seen from Austin, Texas coordinates. I wanted to capture the four main eye-catchers of the winter sky: the bright star Sirius, the constellation Orion, and the star clusters Hyades, and Pleiades.

Sirius in the constellation Canis Major (Greater Dog) is the brightest star of the northern hemisphere. Sirius is also where the name for Sirius Satellite Radio came from and it's the "eye star" in their dog logo. I love showing people this bright star when it's low on the horizon as it twinkles a variety of yellow, greens, reds, and blues like a diamond!

The constellation Orion is prominent in our winter skies. I used to think it was the Big Dipper when I was a kid and that Pleiades was the Little Dipper. It wasn't until I took a class on astronomy at Texas A&M in the fall of 1984 that I learned where those two dipper constellations were truly located. The constellation Orion goes back to tens of thousands of years in human history all the way back to ancient Babylonia and Egypt.

Pleiades in the zodiacal constellation Taurus was often referred to as the Seven Sisters from Greek mythology and they were the children of Atlas and Pleione. It's interesting to note that the Pleiades are the logo of the Japanese car manufacturer, Subaru. Their star logo pops up on the car's LED screen of my wife's Subaru Forester every time the engine is started.

According to Wikipedia, the Hyades were the daughters of Atlas and the half-sisters of the Pleiades. Hyades is in the center of the constellation Taurus and are the stars forming the face of the bull in the mythological drawing. The bright star, Aldebaran, is the left eye of the bull.

Some minor color corrections and editing out smudges using MS PowerPoint and the Snipping Tool. 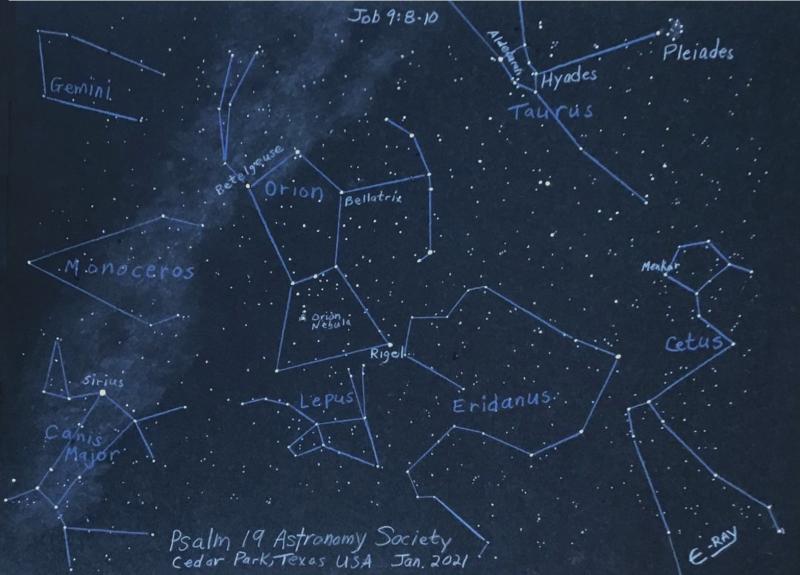 I call Sirius the psychedelic star.  I never get tired of looking at in with binos and scopes.  Maybe it is my crummy conditions but it seems to always put on a show.

Recording constellations in the night sky is such a great way to cement remembering where all the stars are and the constellations relationships to each other. Its something I have been wanting to do as well. And to sit back and just observe the night sky and record it without a telescope is kind of magical. Thanks for posting it,