knife edge test of comatic image from a paraboloid

Consider a knife edge test, at focus, of a comatic star image (say positive coma, for definiteness).  Comatic because it's off axis.  If the knife penetrates the image from the greater radial direction and the knife edge is perpendicular to the radial, what portions of the mirror darken first?

Or, in the off axis spot diagram of a comatic star image, where do the offensive rays strike the mirror?

The knife-edge test is an on-axis test. Coma is an off-axis aberration. Hence the knfe-edge is "blind" to coma. However you have occasions when you do see axial coma, so your question is  valid. 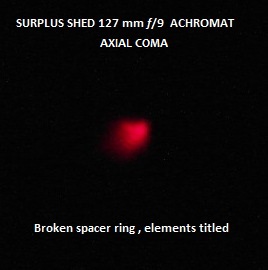 By definition, coma is variation of magnification with aperture. This means that each aperture zone focuses slightly farther/closer and slightly higher/lower than the other.

Consequently, all zones (the full aperture) will form progressively more out-of-focus images (blurs), which are also displaced vertically relative to the axis. I've never tried to use the knfe-edge test on an actual coma, since I doubt you'd be able to see. Based on this, You will never be able to cut all the images of a coma with a knife edge test simultaneously (i.e. make them darken evenly) . 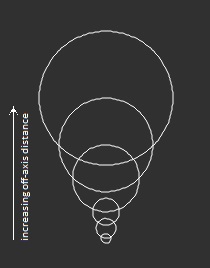 The anatomy of coma (variation of magnification with aperture)

The knife edge test isn't constrained to be an on axis test.

However when testing either in an AC setup or at the CoC there is no field coma.

For field coma to be present you have to use a distant point source like a star with the ke located at the image of the source formed by the test surface.

You could get some kind of off axis aberration using a pinhole source displaced relative to the knife with the COC in the middle.  The coma diagram posted by Mladen indicates that the outer region of the entrance pupil "focus" farther than the central region, and the outer region focus is also shifted away radially from the axial region.  Would the role of a coma corrector be to shorten the ROC of the outer rays of the off axis beam?  Still thinking about the special Newtonian flat with a turned up outer region which improves the off axis performance.

Maybe I should drop this one.

Field astigmatism but not field coma is produced by such a CoC test setup.

Symmetry of the test setup means there is zero field coma.

For an AC setup with the stop at the AC flat symmetry of the test setup results in zero field coma.

Since with a paraboloid SA is corrected the field astigmatism (=0) is independent of stop location when testing a paraboloid in an AC setup.

Just an illustration for what Bruce has said. 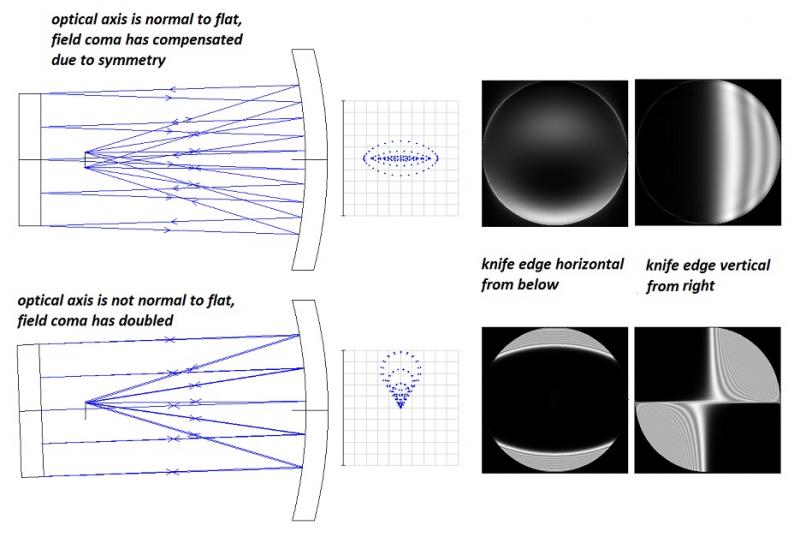 Give me time to think about what you guys are saying.  Slow learner, I am.

ok...been studying Gleb's illustrations...  Please advise of incorrect interpretations and conclusions, if you have time.

Top figure of a symmetrical source/knife layout...flat and test optic (paraboloid) are square.  Left knife edge image  - knife horizontal and entering the beam from below.  The knife is testing the tangential aberration of the image.  The test optic (I like to say the image) appears undercorrected.  Lots of Foucault testers are made with a lateral source and knife edge offset, with a vertical knife edge.  So this figure applies to that test configuration.  May lead to an overcorrected figure, eh? Right knife edge image - knife vertical and entering the beam from the right.  The knife is testing the sagittal aberration of the image.  The knife appears to be outside the "best focus", and the ROC of the central portion of the image is too short.  The image would appear to be overcorrected.  This is the configuration of the slitless Foucault tester.  So there you have it.  Depending on the configuration of the Foucault tester, the image could appear either overcorrected of undercorrected thanks to astigmatism.  I presume this applies equally well to the Bath depending on the source/return beam offset and the fringe tilt direction.  I presume this gibes with the differing curvatures of the tangential and sagittal focal planes.

Bottom figure of an off-axis configuration...flat and test optic not square.  Flat adjusted to return the beam on top of the off-axis source.  This mimics an off-axis stellar image, except for doubling the coma, right?  Left knife edge image - knife horizontal from below.  The knife is testing the tangential aberration of the image.  The image is a mess and if observed on a mirror being figured would cause gas.  Needed correction is asymmetric.  Top of image too long,  Bottom of image too short.  Right knife edge image - knife vertical from right.  Top of image too short.  Bottom too long.  More gas pains.

I used to get paid for thinking this hard.  You guys spit it out like cheap beer (Keystone).

The knife-edge test is an on-axis test. Coma is an off-axis aberration. Hence the knfe-edge is "blind" to coma. However you have occasions when you do see axial coma, so your question is  valid.

By definition, coma is variation of magnification with aperture. This means that each aperture zone focuses slightly farther/closer and slightly higher/lower than the other.

Could we call this "a varriation of focal length with off axis distance" ?

A Bath or other spherical wave interferometer has the advantage that its possible to separate non axisymmetric aberrations (coma astigmatism, trefoil etc) due to the test setup from those polished into the test surface by clocking the test surface about its axis and taking measurements at various clocked positions of the test surface. However a 5 axis mount (or equivalent) for the test optic is required to ensure accurate clocking about the axis of the optic without incurring tilt and lateral translation of the test surface.

The field coma and astigmatism can easily be calculated or otherwise estimated (eg via raytracing) to see if they are significant for the test surface.

Could we call this "a varriation of focal length with off axis distance" ?

I don't see why not. It makes sense, of course and there may be other definitions, but I'm familiar only with this one, and as far as I know it is accepted by the professional community.